How to Cite: Kheradmand A, Hosseini A, Farhadinasab A. The Frequency and Factors Related to Aggressive Behavior in Psychiatric Patients Controlled by a Variety of Restraint Methods. Iran J Psychiatry Behav Sci. 2022;16(1):e98881.
doi: 10.5812/ijpbs.98881.

Aggressive behavior of patients in psychiatric wards is one of the main challenges faced by healthcare workers. Despite the abundance of research on the frequency of aggressive behavior, not enough attention has been paid to its severity. Furthermore, limited studies have evaluated the restraint methods used to manage aggressive behaviors.

We evaluated subjects admitted to the adult psychiatric wards of Imam Hossein and Taleghani hospitals in Tehran, Iran, in 2018. The patients were controlled by various restraint methods during hospitalization. All the patients were evaluated for the severity of aggression, which was determined utilizing the Persian version of the Modified Overt Aggression Scale (MOAS). All the data along with demographic and clinical characteristics obtained from medical records were analyzed using the Mann-Whitney and Kruskal-Wallis nonparametric test (P-value = 0.05) and Spearman correlation coefficient to describe the factors affecting the aggressive behavior of patients.

This study aimed to compare the relationship between demographic information, diagnosis of psychiatric problem, medical illness, and hospitalization characteristics with features of aggressive behavior in patients experiencing different types of restraint during hospitalization.

In this study, we included a total of 132 patients (males: 87 vs. females 45) admitted to the psychiatry wards of Taleghani and Imam Hossein hospitals in Tehran, Iran, in 2018. All patients had been restricted during hospitalization. The mean age of the patients was 36.7 years (SD: 12.7), and the age range was 18 - 71 years. The patients were divided into four groups, including verbally-controlled patients (no medication assistance and no physical restraint), patients controlled only by drugs, patients controlled by physical restraint (isolation/fixation), and patients controlled by medication plus physical restraint. Demographic characteristics, including age, gender, educational status, employment status, marital status, admission type, final diagnosis, history of hospitalization, history of drug use, history of aggressive behavior, medical illness, and ward type, were collected based on the patients’ medical information. The patients had been admitted to the women-only, men-only, and emergency wards.

Given the broad definitions of aggressive behavior and different theories about its origin, a standardized method is required to understand and quantify the aggression and its severity. Various unique aggression observation scales have been introduced to standardize the quantification of the aggression severity and provide a single definition for the observed behavior. Among these scales, the Modified Overt Aggression Scale (MOAS) is an aggression observation tool with good inter-rater reliability, which separates aggressive behavior into four subcategories of verbal aggression, aggression against property, auto-aggression, and physical aggression (12). In this study, we used the Persian version of MOAS to assess the severity of aggressive behavior. The questionnaire was completed by nursing staff after the aggressive behavior was observed for each patient within 24 hours. The English version of the questionnaire was first translated into Persian by two independent translators. Afterward, the two translations were compared by an individual fluent in both languages, and a single copy of the Persian translation was prepared. Subsequently, the reverse translation from Persian to English was performed by a bilingual translator who had not seen the original version of the questionnaire. The English translation was then compared to the original version of the questionnaire. To determine the face validity of the questionnaire, the Persian version was primarily provided to the evaluators, and their opinions on understanding words and phrases, appropriateness and relationship of the items, the possibility of ambiguity in terms or the existence of inadequacies in the meanings of the words were received and applied. Finally, the revised Persian version was approved by five faculty members of the Psychiatry Department of Shahid Beheshti University of Medical Sciences.

Moreover, in order to evaluate the reliability of the questionnaire, the inter-rater agreement level was assessed based on the method described by Oliver et al. (13). Thus, for a group of constant patients, the scale was measured independently by two different raters. According to the study by Oliver et al., 60 observations or 30 measurement pairs (for each aggression occurrence, one measurement with the primary rater and one measurement with the second rater) were needed. The data was then used to calculate the kappa score [with 95% confidence interval (CI)] and intraclass correlation coefficient (with 95% CI). All the raters recorded their ratings independently and were blinded to the results by the other raters. The total number of evaluators was six, the number of patients was 18, the duration of the reliability assessment was four months, and the value of the MOAS for the recorded events ranged from 1 to 21. Table 1 represents the results of the reliability evaluation. As can be observed, the levels of agreement between the raters for the total scale and physical aggression (to others) were significantly high, followed by verbal aggression, auto-aggression, and aggression against property. Based on the intraclass correlation coefficient, the agreement between the raters could be considered clinically significant for the questionnaire. Generally, the agreement level (ICC) above 0.75 was acceptable. It should be noted that both methods of the kappa coefficient and intra-cluster correlation index can be used; however, the use of ICC for MOAS has been recommended due to its ordinal nature (13).

Table 1. Evaluation of Inter-rater Reliability for the Persian Version of Modified Overt Aggression Scale

After determining the reliability and validity of the MOAS questionnaire, a pilot study was conducted for two months in the psychiatric wards in order to remove any potential concerns. In addition to holding training sessions on the importance of the research design, the staff who were more willing to cooperate in the study were selected as data collectors at the end of each shift.

For the descriptive analysis, statistical parameters were utilized to describe the data depending on the variable. Mann-Whitney and Kruskal-Wallis nonparametric tests (P-value = 0.05) were applied to determine the relationship between the variables depending on their type. We also used the Spearman correlation coefficient (α = 0.01) to determine the relationship between MOAS and the number of days spent in the hospital. IBM SPSS 24 was used for statistical analysis.

According to the results in Table 2, this behavior was more frequently observed in males. Furthermore, being married, having a pre-university degree, and unemployment accounted for a higher proportion of the patients showing aggressive behavior. The majority of the cases showing aggressive behavior were admitted involuntarily and also had more than one experience of hospitalization. Additionally, the proportion of the patients with mood disorders was higher compared to that in other groups. Substance abuse was present in only 32.8% of cases. 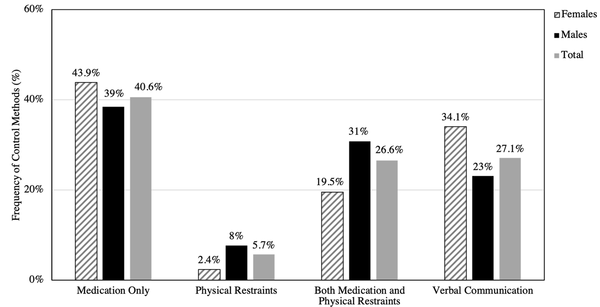 However, in this study, certain clinical factors showed contrasting results with some previous studies. In the present study, aggressive behavior was observed more frequently in patients with mood disorders. Some studies have suggested the highest prevalence of aggressive behaviors among patients with schizophrenia (14). Nonetheless, Volavka reported that the prevalence of violent behavior in bipolar disorder is at least as high as that in schizophrenia (18). The reason for this contradiction is that research efforts in bipolar disorder lagged behind analogous work in schizophrenia (19). Another reason for different results in this study was substance abuse. The presence of substance abuse was correlated with the frequency of aggressive behaviors in previous studies; however, those results have shown a great degree of heterogeneity. Some studies have reported that including alcohol use might affect the results (14). Another reason for this difference might be that this information was based on self-reporting of the patients regarding their substance abuse, and respondents may misreport or deny their usage (20). Consistent with previous studies (14), both involuntary admission and previous hospitalization admissions were correlated with an increased number of aggressive behaviors.

In this study, we also investigated the relationship between demographic and clinical variables with the severity of aggressive behavior. Among the demographic variables, gender, education level, and history of aggressive behavior before admission were significantly correlated with MOAS. It is noteworthy that higher severity in aggressive behavior was observed in male patients and those with a lower education level. Among the clinical variables, the severity of aggressive behavior had a weak positive correlation with a more extended hospitalization period. Moreover, admission type, concomitant medical illness, and substance abuse were significantly correlated with the MOAS. The patients with involuntary hospitalization and the absence of non-mental medical conditions were more aggressive, and a history of substance abuse was associated with an increase in the severity of aggressive behavior. Although the number of studies on aggression severity is considerably lower compared to that on aggression frequency, some of the observed results are comparable to the literature, such as a significant relationship between aggression behavior intensity and substance abuse (21). In terms of aggression management, the majority of incidents were controlled by drugs, and physical methods were rarely applied. However, there was a contrast in the management method for female and male patients. Less aggressive methods were used to control female patients.

In general, the results of this study suggested that the male gender, being single and unemployed, and having mood disorder diagnosis were correlated with a higher frequency of aggressive behavior. However, the severity of these behaviors correlates with gender, education level, duration of the hospitalization, admission type, concomitant medical illness, and history of substance abuse. This information could be used for early identification of patients with the potential of aggressive behavior. This practice would assist the caregivers in considering an effective management strategy to control these patients, and an appropriate approach might be used to prevent potential adverse consequences. Understanding a proper management strategy requires further research in this regard.

The most important limitation of this study was that some of the aggressive behaviors could be missed by the nursing staff, which may lead to underestimation of the incidence of aggressive behavior. Moreover, demographic characteristics were based on the information recorded in the patients’ medical history file. Hence, the accuracy of this information depends on the accuracy of the registrants. It is suggested that the patients’ view on aggressive behavior be considered in future studies. Time constraints and the elimination of adolescent patients from the samples were also among the limitations of the current study.

The authors are grateful to the nursing staff of Imam Hossein and Taleghani hospitals in Tehran for their kind collaboration.