Aldehydes are compounds that are widely used and popular in organic synthesis due to their high reactivity. This advantage is a disadvantage in medicinal chemistry. Due to the ability of aldehydes to participate in nucleophilic reactions (especially in aqueous biological media) and access to nucleophiles such as amino acids and nucleic acids, drugs with aldehyde functional groups are always used with caution and carefully quantified in biological fluids. Our experience in working on biologically active aldehydes indicates the transformation of these groups of compounds in aqueous or alcoholic solution and thus the failure of analytical methods for their accurate monitoring in such media. Both mass spectrometry and Proton nuclear magnetic resonance spectroscopic findings indicate the reaction of spiramycin with water molecules in an aqueous solution, resulting in the conversion of spiramycin to a new molecule with 18 mass unit difference and thus, the residue amount which is measured and reported based on a mass spectrometries method does not show the correct amount of spiramycin in these samples.

Aldehydes are well known as very reactive chemicals in organic chemistry. They are considered intrinsically high reactive building blocks and thus favored by synthetic organic chemists. In medicinal chemistry, however, the aldehyde functional group (formyl group) is generally considered not so safe functional group due to its rapid reaction with a variety of nucleophiles in biological systems, such as the amino group in proteins and nucleic acids. Regardless of their favored nature in organic synthesis and unfavored nature in medicinal chemistry, aldehydes should be considered challenging when it comes to their detection and determination in analytical chemistry (1).

It has been well demonstrated that water adds rapidly to the carbonyl functional group of aldehydes to form geminal diol (Figure 1). In a similar reaction, alcohols add reversibly to aldehydes to form hemiacetals (2). This reaction can continue by adding another alcohol to form an acetal (Figure 2).

Addition of alcohols to aldehydes to form hemiacetals and acetals

The efficiency of addition reactions to an aldehyde is determined by how electrophilic the carbonyl carbon atom is. The partial positive charge of the carbon is magnified by the presence of the electron-withdrawing group attached to carbonyl and suppressed by the presence of electron-donating groups. Therefore, aliphatic aldehydes are more reactive than aromatic aldehydes in reaction with water or alcohol.

The high reactivity of aldehydes in aqueous or alcoholic solution to form geminal diols or acetals could be troublesome when aldehydes are to be detected and/or quantitatively determined in the solutions, particularly in biological fluids.

From an analytical chemistry point of view, the molecular transformation of aldehydes to their corresponding geminal diol or acetals in aqueous or alcoholic media would be a lethal incident because the target analysis changes its nature during the process of monitoring. The problem becomes more dramatic when mass spectrometry is used to monitor the target molecule. The unique sensitivity and specificity of analytical methods (which are developed based on mass spectrometric detection) totally depend on the integrity of the chemical structure of a molecule. Should the chemical structure of a target compound be changed during the application of the method, the great and competent ms-based method will fail despite its all greatness and capacities. Our experience in working on biologically active aldehydes indicates the transformation of these groups of compounds in aqueous or alcoholic solution and thus the failure of analytical methods for their accurate monitoring in such media (3).

Although the occurrence of an aldehyde functional group is not so often in active pharmaceutical ingredients (API), there are still quite a few important medications with the aldehyde group in their structures. Streptomycin is an essential medicine recognized by the World Health Organization (WHO) for the treatment of various infections, particularly tuberculosis (4). It was discovered at Rutgers University as the first-in-class aminoglycoside in 1944, and its use led to a dramatic reduction in the death rate of tuberculosis around the world (1). Streptomycin bears an aliphatic aldehyde in its structure, and one may speculate that the aldehyde will react with water molecules in an aqueous solution (Figure 3) (5).

7 aldehyde-containing, 16-membered macrolide antibiotics are now clinically used across the world (6). As metabolites of various Streptomyces strains, these macrolides were first identified in the 1950s and 1960s. The first isolated members of the family (i.e., spiramycin and tylosin) best depict their structures (Figure 4) (1). 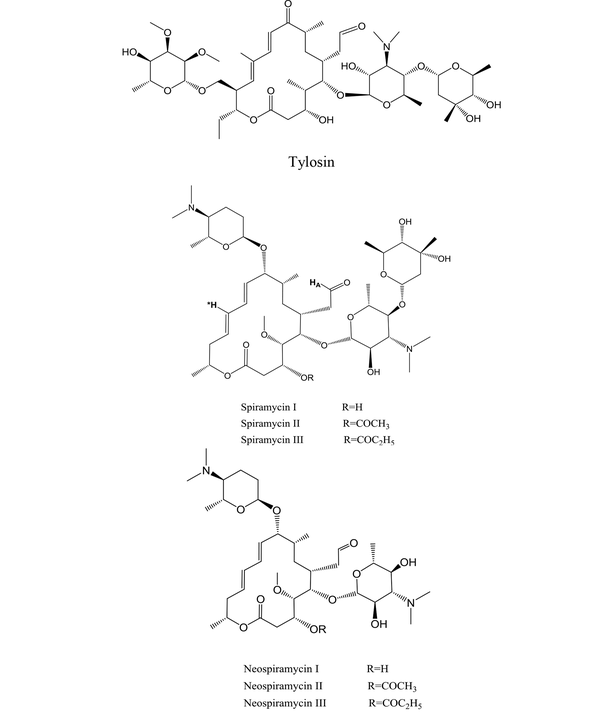 Dissolving spiramycin (molecular weight: 843.6 g/mol) in water and monitoring its mass spectrum in an electrospray ionization (ESI) system (Figure 5) show an extra peak at 861.5 m/z, which is in agreement with the addition of 1 water molecule to the spiramycin structure (Figure 6). 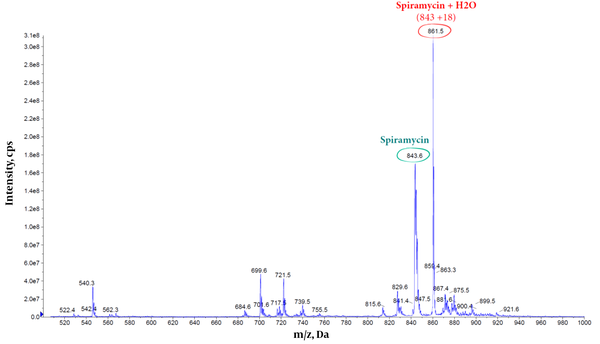 Addition of water molecules to the spiramycin structure.

Furthermore, the methanolic solution of spiramycin shows an extra peak at 875.7 m/z, corresponding to the addition of a molecule of methanol to the spiramycin (Figures 7 and 8). 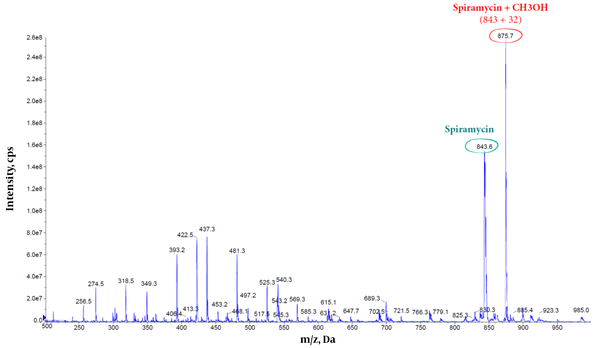 Addition of methanol molecules to the spiramycin structure 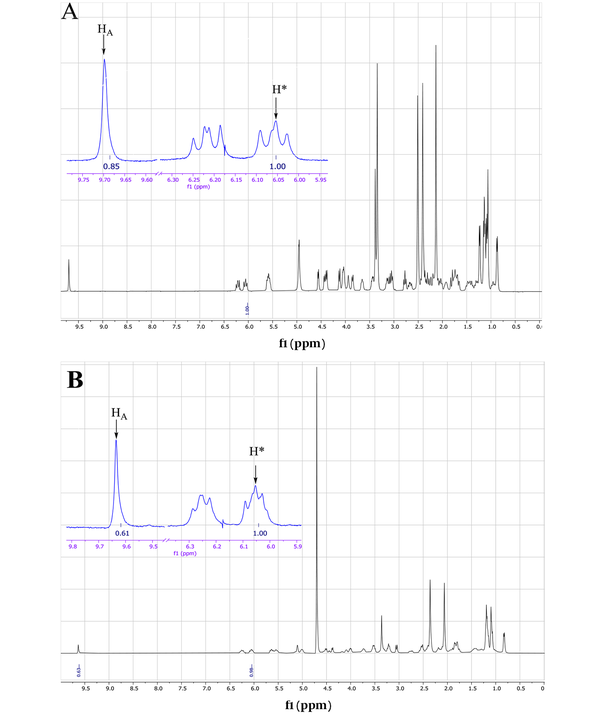 The 1H-NMR spectrum of spiramycin pure standard dissolved in A, d6- DMSO; and B, Mixture of d6- DMSO and D2O.

Both mass spectrometric and 1H NMR spectroscopic findings indicate the reaction of spiramycin with water molecules in an aqueous solution, resulting in the conversion of spiramycin to a new molecule with 18 mass unit difference. If an analytical method is set up based on monitoring the molecular mass of spiramycin to its diol derivative in an aqueous solution, it will cause a significant error in the accuracy of measurement. This becomes more problematic when we know that the Codex Alimentarius has set up a maximum residue limit (MRL) for spiramycin in different foods such as milk (200 µg/kg) (9). It is conceivable that spiramycin is changed to its geminal diol derivative in such aqueous matrices, and thus the amount of spiramycin which is measured and reported for a sample based on validated mass spectrometric method does not represent the real (correct) amount of spiramycin in the sample due to the mass shift of spiramycin (MW = 843.6) to spiramycin hydrate (MW = 861.5).

- The ability of aldehydes to participate in the nucleophilic reaction was mentioned.

- Our experience in aldehyde drugs indicates the transformation of these compounds in aqueous solutions.

- Spiramycin converts to a new molecule with the mass difference in biological fluids.

Copyright © 2022, Author(s). This is an open-access article distributed under the terms of the Creative Commons Attribution-NonCommercial 4.0 International License (http://creativecommons.org/licenses/by-nc/4.0/) which permits copy and redistribute the material just in noncommercial usages, provided the original work is properly cited.
download pdf 1.40 MB Get Permission (article level) Import into EndNote Import into BibTex
Number of Comments: 0