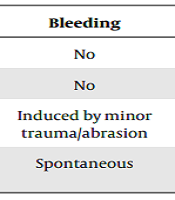 The main therapy for head and neck cancer is radiation, and one of the toxic effects of radiation is radiation dermatitis. Aloe vera is a species of succulent plant of the genus Aloe, widely used in cosmetic and skin care products, as well as daikon (Raphanus sativus var. longipinnatus), which is high in antioxidants.

The present study aims to evaluate the potential benefits of Aloe vera and daikon gel combination in head and neck cancer patients to prevent radiation-induced dermatitis.

The combination of Aloe vera and daikon gel showed promising results in reducing the severity of radiation-induced dermatitis for head and neck cancer patients.

Head-and-neck cancers are ranked as the seventh most common in the world, with an estimated new case of more than 930,000 in 2020 that, accounts for 4.7% of all cancer deaths (1). Their occurrences are more prominent in South Asia. Some etiological and contributing factors involved are human papillomavirus infections, tobacco smoking, the use of electronic cigarettes, and alcohol consumption. Certain occupations, such as cook, waiter, or cleaner, were also known to be risk factors. On top of that, several other risk factors include poor oral hygiene, reduced fruit and vegetable consumption, and physical inactivity (2).

One of the principal therapies for head and neck cancers is radiation therapy. The most significant side effect observed in 80 - 90% of patients undergoing radiotherapy is radiation dermatitis which can appear as early as hours to 90 days after exposure (3). An acute radiation dermatitis is a form of epithelial injury commonly manifested as erythema, desquamation/excoriation, or even ulceration and necrosis. This phenomenon can be caused by the interference of radiation therapy with normal maturation and production of epithelial and hair matrix cells, which causes radiation-induced changes in the dermal structures. After the first dose is administered, short-lived free radicals that were formed will disturb the cellular DNA, stimulating proinflammatory cytokines and chemokines to attract eosinophils and neutrophils, therefore, perpetuating the damage and causing damage in the protective skin barrier (4).

Skin erythema usually occurs at doses > 2 Gy, dry excoriation in the range of 12 - 20 Gy, moist desquamation at doses > 20 Gy, and necrosis at doses > 35 Gy. Some internal risk factors such as age, comorbidity, skin phototype, and genetic predisposition, as well as external ones like the total dose, dose per fraction, energy, duration, application of booster doses, dose volume to surfaces exposed to radiation, and the treatment site, may individually contribute towards the condition. The skin of the anterior neck is more vulnerable and sensitive than the skin covering the rest of the body (3, 5).

Aloe vera has been known to possess some anti-inflammatory effects and has been used in some studies for its protective ability of the skin against radiation damage. Its anti-inflammatory activity with possible downregulation of MMP-9 in blood cells was found in aqueous extract. Applying its topical gel preparation was found to accelerate burn healing time and induce epithelialization. It also increases wound contraction, alignment, and organization of the regenerated scar tissue and exerts antimicrobial and antifungal actions (6).

On the other hand, daikon or Japanese radish (Raphanus sativus var. longipinnatus) is a type of vegetable root that has been well-known for its health benefits, including its action as an antimicrobial and antioxidant. The antioxidant properties come from its flavonoids and the anthocyanin (acylated pelargonidin derivative) contents. However, the pro-oxidant and antioxidant capacity of this plant still requires more in-depth research (7).

Currently, there is still no standardized therapy for radiation-induced dermatitis. Most preventive efforts are made by maintaining hygiene and moisture of the radiated skin and its surroundings and using topical steroids. Severe skin reactions towards radiation therapy, grade III and IV, can cause impairment of daily activities and barely-tolerated pain and itchiness (4). In addition, there are still limited findings on daikon as a topical agent (8).

This study aims to evaluate the potential benefits of using Aloe vera and daikon gel combination in head and neck cancer patients as a preventive measure against developing radiation-induced dermatitis.

The study was approved by the FK-USU-RSHAM Hospital Institutional Review Board and the Medical and Health Research Ethics Committee Faculty of Medicine, University of Sumatera Utara, number 158/KEP/USU/2020.

The subjects were divided into two groups (study and control groups). A commercially-available combination gel containing Aloe vera and daikon (Aloe vera 2, daikon 4) was provided to each participant in the study group on the day of the first radiotherapy session. Subjects in the control group were given baby oil (Johnson’s baby oil, Indonesia). All participants were asked to use the product on the radiation-exposed area of the skin twice daily (day and night) until ten days after the end of the last radiotherapies (RT) session with no other medication. During the RT session, subjects were educated to wipe off the given treatment before entering the session. The contents of the combination gel are listed in the table below. The baby oil consists of mineral oil and fragrance (Table 1).

The skin was assessed and documented in comparison to future changes. The skin conditions were reviewed by at least two investigators and one dermatologist blinded to the study. Furthermore, routine blood tests and random blood glucose levels were obtained at the integrated laboratory. Any developing lesion will be graded according to the severity of dermatitis after radiation (Table 2). The skin conditions were evaluated at the 10th, 20th, 30th, and 35th sessions of radiation, routine blood tests, and blood plasma were assessed, and the same measurements were done for the control group. If the radiation dermatitis became severe and infected, this case would be terminated from the study.

The prescribed locoregional radiation doses were 70/60/54 Gy for a treatment duration of 35 fractions to the high, intermediate, and low-risk regions, as mentioned in the international guideline from Lee et al. (9). The final 44 patients of this study also received concurrent chemotherapy with radiotherapy with weekly scheduled 40 mg/m2 cisplatin from day 1 for 6 - 8 cycles according to the routine protocols of the European Society of Medical Oncology (ESMO) (10).

Table 3. Baseline Characteristics of Patients in the Study a

There was no significant difference in blood glucose levels (P = 0.767) between groups, as seen in Table 4.

At the beginning of the study, all skin conditions of both groups were normal. Table 5 describes the patients’ skin condition after radiotherapy sessions.

Table 5. Post-Radiation Skin Condition with or Without Intervention a

In this study, most patients had normal weight (36.4%), 25% were overweight, 20.5% were obese grade 1, 13.6% were underweight, and 4.5% were grade 2 obese. Most of the subjects were also at clinical stage 4 (38.6%). A study by Meyer et al. found that gender (female vs. male OR = 1.72, 95% confidence interval 1.06 - 2.80) and BMI (above 25 vs. below OR = 1.88, 95% confidence interval 1.22 - 2.90) were independent predictors of severe acute radiation toxicity (11). Another study by Chugh et al. found that TNM stage IV (P = 0.023) and concurrent administration of chemotherapy (P = 0.002) were significantly correlated with severe acute radiation-induced skin and mucosa toxicity (12). However, most of these studies were small-sized retrospective studies. There was also no difference in blood glucose levels between the two groups. This indicates that there was no problem with wound healing. Overall, there was no difference in patients’ characteristics between the two groups, thus minimizing the risk of bias.

This study has shown that the application of aloe-daikon gel reduces the severity of radiation-induced dermatitis. Several risk factors may influence the occurrence or severity of radiation toxicity, such as the female gender, BMI over 25, and concurrent chemotherapy. Further study of the protective properties of the aloe-daikon gel on patients with these risk factors of radiation toxicity may be beneficial for a more tailored and individualized management.

The combination of Aloe vera and daikon gel in this study showed promising results in reducing the severity of radiation-induced dermatitis for head and neck cancer patients.

Copyright © 2022, Author(s). This is an open-access article distributed under the terms of the Creative Commons Attribution-NonCommercial 4.0 International License (http://creativecommons.org/licenses/by-nc/4.0/) which permits copy and redistribute the material just in noncommercial usages, provided the original work is properly cited.
download pdf 101.25 KB Get Permission (article level) Import into EndNote Import into BibTex
Number of Comments: 0