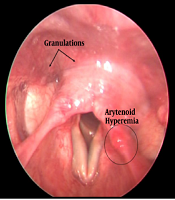 Prevalence and Correlation of Laryngopharyngeal Reflux in Females with Vitamin D Deficiency in a Multi-Specialty Polyclinic in New Delhi, India

A descriptive observational study was done at a multispecialty polyclinic in New Delhi, India, over a period of one year. Based on a pilot study, a sample size of 185 individuals was taken. All females referring to the general outpatient department (OPD) with vitamin D levels below 20 ng/ml were included. The frequency of LPR symptoms in the study participants was assessed using the reflux symptom index (RSI) and reflux finding score (RFS) given for all symptomatic patients using a validated scoring system. The data were analyzed descriptively with Microsoft Excel and SPSS version 21 using appropriate tests.

Hypovitaminosis D does not have any effect on LPR in the Indian female population.

Laryngopharyngeal Reflux (LPR) is a condition in which gastric content reflux into the larynx and pharynx. It is one of the extraesophageal manifestations of gastroesophageal reflux disease (GERD), involving the laryngeal region (1). The laryngopharyngeal epithelium is more susceptible to reflux-related tissue injury than the esophageal epithelium (2). These injuries result in a wide constellation of symptoms commonly seen as voice changes, odynophagia, and lump sensation in the throat (3, 4). The prevalence of LPR in Indian women in north India is reported to be approximately 10% (5).

Recently, the role of vitamin D is being evaluated as one of the factors responsible for GERD and LPR. Approximately more than two-thirds of Indian females are found deficient in vitamin D, with a prevalence of 64.06% (6). Hypovitaminosis D is a known causative factor for muscular sphincter relaxation and contraction, resulting in delayed muscle relaxation and longer times to reach peak muscle contraction (7, 8). This mechanism affects the tone of the lower esophageal sphincter, thereby resulting in reflux.

On the basis of the above pathophysiology, we hypothesized whether severe vitamin D deficiency might result in increased LPR symptoms in Indian females. This study aimed to prove or reject this hypothesis.

The objective was to find out the prevalence of LPR in the severe vitamin D deficient Indian female population.

This descriptive observational study was carried out at a multispecialty polyclinic in North India over a period of one year between May 2019 to May 2020 after approval from Institutional Ethics and Scientific Committee. A pilot study was conducted during the month of March to April 2019, in which 34 consecutive females with Vitamin D levels below 20 ng/ml were recruited. Four out of these 34 females showed a score of more than 13 on the reflux symptom index (RSI) and taken as symptomatic for LPR. The disease proportion in reported patients was found to be 11.7% based on this pilot study. These data were used in sample size calculation. The sample size was calculated using the following formula:

Where n was the sample size, Z was the statistic value corresponding to the level of confidence, P was considered the prevalence (obtained from the pilot study conducted), and d is the precision. Considering a 95% level of confidence and 5% (d) precision, the statistical corresponding value of Z was estimated to be 1.96. The value of n was calculated as equal to 158. Considering dropouts, an adequate sample size of 185 was taken.

All females referring to the general outpatient department (OPD) with vitamin D levels below 20 ng/ml and willing to participate in the study were included after obtaining consent. Females reporting to OPD for antenatal care, who were on long-term steroids and/or proton-pump inhibitors (PPI) and with any history of laryngeal manipulation, were excluded from the study. All participants were divided into two groups based on age; less than 25 years and more than 25 years and based on vitamin D levels, less than 10 ng/ml as severe deficiency, and 11-20 ng/ml as mild to moderate deficiency. The study participant’s frequency of LPR symptoms and its severity were subjectively assessed using RSI described by Belafasky et al. (9), as shown in Figure 1. The severity of nine commonly encountered LPR symptoms was assessed, and scores were given using a five-point Likert scale checklist. The total score ranged between 0 and 45 for each participant. A score of less than 13 was defined as no LPR symptoms, a score between 13 to 29 as mild to moderate symptoms, and 30 or more as severe LPR symptoms. 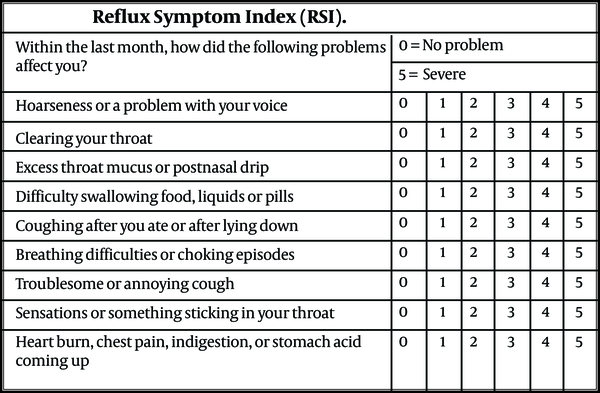 The reflux symptom index adopted from Belafsky et al.; the validity and reliability of the reflux finding score are shown (9).

All participants with RSI score more than 13 were subject to a 70-degree rigid video-laryngoscopy, and the findings were recorded. The reflux finding score (RFS) was given to each positive finding, as described by Belafasky et al. (9), as shown in Figure 2. In fact, RFS is an eight-item clinical severity rating score based on laryngoscopy findings. The participants who did not undergo laryngoscopy owing to RSI less than 13 were given an RFS of 0. the patients were then divided into three groups based on total RFS. A score of 0 was defined as no disease, RFS 1 to 10 as a mild disease, and RFS more than 10 as moderate to severe disease. All observations were recorded by the same investigator to rule out observer bias. 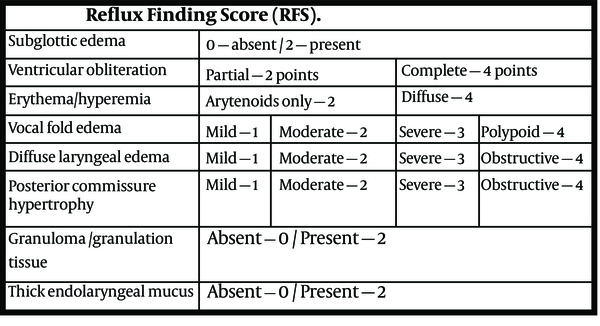 LPR symptoms in this study

Video-laryngoscopy findings in this study

The laryngopharyngeal complex is made of bone, cartilage, and mucosa. Given its similarity to the remaining musculoskeletal structures and the known vitamin D deficiency-induced muscular dysfunction, a hypothesis was made that vitamin D deficiency might lead to LPR. A higher reflux index score was hypothesized in the severe vitamin D deficient group. We could not demonstrate a statistically significant correlation (P value > 0.05) between the severity of vitamin D deficiency and RSI as well as RFS. A similar effort was made in 2016 by Hamdan et al. (10), who investigated the effect of vitamin D on vocal tract symptoms in a limited sample size. They used vocal tract discomfort scores in their methodology to quantify the frequency and severity of vocal tract symptoms in the vitamin D deficient group and found no significant difference. Despite the limited background knowledge on the subject due to the paucity of research, we could draw significant conclusions with an appropriate sample size and validated scoring system.

Copyright © 2020, Journal of Archives in Military Medicine. This is an open-access article distributed under the terms of the Creative Commons Attribution-NonCommercial 4.0 International License (http://creativecommons.org/licenses/by-nc/4.0/) which permits copy and redistribute the material just in noncommercial usages, provided the original work is properly cited.
download pdf 2.75 MB Get Permission (article level) Import into EndNote Import into BibTex
Number of Comments: 0