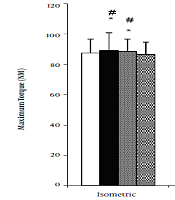 Implementing the post-activation potentiation phenomenon before a competition in the warm-up section may be better than performing the usual warm-up.

Therefore, the purpose of this study was to determine the effects of type and intensity of muscle contraction with different recovery periods on anaerobic power and peak torque in young trained girls.

The between-group comparisons showed that the highest anaerobic power and peak torque values in immediate and three-minute recovery periods were seen in the concentric protocol, and the highest values in seven-minute recovery periods were seen in the eccentric protocol (P < 0.05). These variables were also significant in concentric and eccentric contractions in within-group comparisons (P < 0.05).

Warm-up, as a key element of a training session or competition, is regularly used by athletes to avoid injuries and achieve high performance. The warm-up consists of a general section and a specific section (1).

The existence of proprietary movements relevant to the type of the main activity in the content of the warm-up program will prepare the body to perform basic movements well, having the greatest impact on improving one's performance. It well prepares the body to perform basic movements, and it alone can have the greatest impact on improving one's performance (2). Implementing the phenomenon of Post-Activation Potentiation (PAP) in the warm-up section may be better than the usual warm-up methods and could improve the performance of explosive sports activities (3). PAP is caused by a voluntary contraction that is usually executed at or near-maximum intensity, which is defined as the increase in force/torque after an optimum contraction (3).

The interval between stimulation and evaluation should be appropriate for the recovery of fatigue-induced waste products and measuring muscle strength because the PAP state disappears about 15 minutes after stimulation. Comyns et al. (2006) reported that it takes four minutes to obtain the PAP effect (8). Immediately after the contraction, Gilbert et al. (2001) reported a decrease in the amount of isometric force development, but after recovery (4.5 to 12.5 minutes), the rate of force development increased significantly (9). French et al. (2003) did not use the recovery period but observed a significant increase in performance immediately after three sets of three-second isometric contraction (10). Mangos et al. (2006) observed no change in vertical jump performance 3 min after squat back with 90% 1RM load (11). Immediately after three sets of 10 seconds of isometric contraction, Bahm et al. (2004) did not observe any change in peak force, but after a 10 to 15-min recovery period, peak force decreased (12). Among available studies, only the study by Bogdanis et al. (2014) used eccentric contraction at 70% 1RM intensity and in various recovery periods. Contradictory findings have been obtained that indicate the appropriate interval between stimulation and evaluation depends strongly on the type of stimulation. Therefore, zero, three, and seven minutes of recovery periods were used in this study (4).

According to limited research on the effect of eccentric contraction at intensities above 100% 1RMax, as well as various recovery courses afterward, we investigated the possible mechanisms of this method and compared it with other training methods to determine whether this training method can be used as a substitute for other commonly used methods and determine the mechanisms underlying this effect. Therefore, the purpose of this study was to determine the effects of type and intensity of muscle contraction with different recovery periods on anaerobic power and peak torque in young trained girls.

The population of the study was 20 active girls. The inclusion criteria included having at least two years of continuous exercise activity and at least three to four training sessions per week, as well as attending all the training sessions (11). The subjects who did not meet these conditions or did not participate in the practice or measurement of variables during the research process or those who were injured were excluded from the research. Thus, according to the research conditions, 12 subjects were selected randomly as the sample (Table 1). Subjects gave their written and oral consent. Subjects were also monitored for injuries that affected their performance (11). All the experimental procedures performed in this study were approved by the Ethics Committee of Razi University.

Table 1. Descriptive Characteristics of the Subjects

To reduce the learning effects, all subjects in this study performed six times of maximal torque test and Sargent vertical jump test. Each session was performed separately with a recovery time of 48 hours. On the first day, only the maximum torque test (the first and second times) was performed. In the following days (with 48 hours intervals), the first pretest of maximum torque test (the third time) was performed, followed by the corresponding contraction protocol, including either isometric contraction (3×70/7s), concentric contraction (3×90/4), or eccentric contraction (3×110/5), or control conditions. Immediately after, a maximum torque test (the fourth time) was performed, which was repeated after recovery periods of three minutes (the fifth time) and seven minutes (the sixth time). This process was run for all the research variables (anaerobic power and maximum torque) with equal intervals, respectively. To perform control conditions, subjects only performed the pretest and posttest on different days and did not perform contraction protocols. All subjects also randomly performed all the contraction protocols between the third and fourth sessions. Besides, all of them performed a standard warm-up protocol before performing the third session. This protocol involved the warm-up in all groups, including five minutes of running with a heart rate of 120 to 140 beats per minute, approximately equivalent to 30-40% of maximum oxygen consumption. Then, a third measurement was performed immediately, which included a Sargent vertical jump test to measure anaerobic power and a knee-extension test with the isokinetic gymnex dynamometer to measure maximum torque. Immediately after the pretest (the third time), the subjects performed the contraction protocols and then performed the posttest (the fourth, fifth, and sixth times) (1, 11-16).

Descriptive statistics, such as mean and standard deviation, were used to analyze the data. Two-way ANOVA with repeated measures was used to determine within-group and between-group differences. The Tukey post hoc test was applied when the differences were significant. The confidence interval of α < 0.05 was considered at all stages of the test. 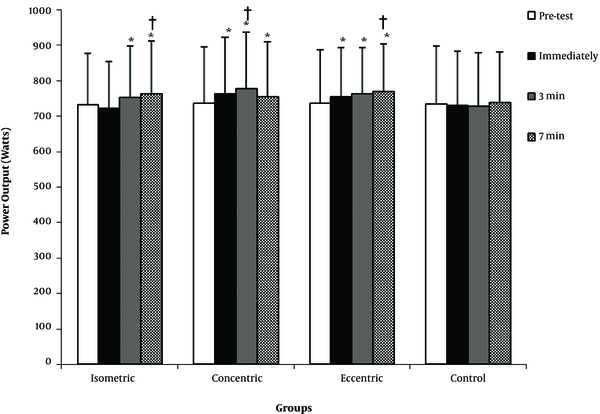 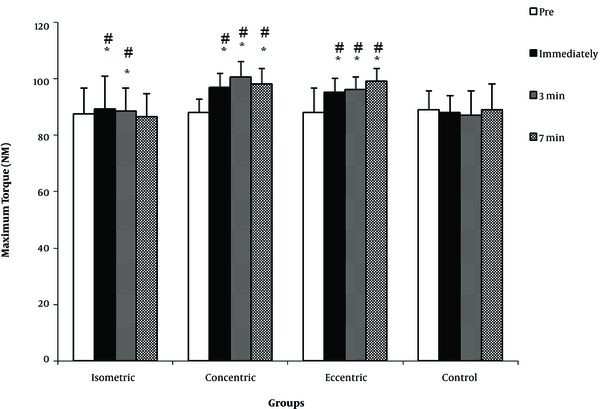 cSignificant difference with the control group due to interaction.

dSignificant difference with the control group.

The results of this study indicated that isometric, concentric, and eccentric contractions with short-term recovery periods improved athletic anaerobic power performance. The results are consistent with the results by Gourgolis et al. (2003) and Bogdanis et al. (2014) (4, 17). However, most previous studies suggest that in adult male trained subjects, maximal squat performance would produce the greatest improvement in vertical jump performance, which can be concluded that any contraction that stimulates muscle fibers can further improve subsequent function and ultimately benefit more from the PAP phenomenon. It should be noted, however, that there was no significant difference between the present study and those mentioned studies at the time of recovery following the contraction protocol and the severity of contractions. Also, the results of this study are inconsistent with the results by Tsolakis et al. (2011), Bogdanis et al. (2014) (the result of concentric contraction), and Petisco et al. (2019) (the result of the recovery period of seven-minute posttest) (4, 7, 18). The reasons for the inconsistency of the present study with the mentioned studies may be the differences in subjects’ characteristics (gender, mature or elite, etc.), the type and intensity of the contraction applied, or the duration of recovery time.

On the other hand, the results of the analysis of variance with repeated measures on maximum torque performance by the knee extension test showed a significant difference in the time effect and the interaction of time and group effect (group × time) (P < 0.05). The result of the one-way analysis of variance showed a significant difference between all contraction protocols and control conditions in all recovery periods (P < 0.05) (Table 2). The result of the Bonferroni post hoc test showed no significant difference between isometric contraction in the seven-minute posttest with the control conditions (P > 0.05) (Figure 2). The results also showed that at recovery times of immediate and three-minute posttest, most changes were observed in concentric contractions, but at the seven-minute posttest, most changes were observed in eccentric contraction (Table 2).

The results of this study indicate that isometric, concentric, and eccentric contractions with short-term recovery periods improved maximal torque performance. The results of this study are in line with the results by Buadry and Duchateau (2007) and Lima et al. (2014) regarding the effect of isometric and concentric contractions (14, 19). However, no research was found to contradict our findings. Among the reasons that can be suggested for increasing both anaerobic power performance and maximum torque performance during immediate and three-minute recovery periods in isometric, concentric, and eccentric contractions are the advantages of the PAP warming method, which involves the use of a motor unit, phosphorylation of the regulatory light chain, and the change in the angle of force (10, 14, 20, 21). Warming-up with the PAP method can increase the force output while the amount of motor unit with sub-maximal contractions is continuously decreasing; therefore, the PAP method acts by reducing the threshold required to reactivate motor units (e.g., decreased transmitter error and/or increased phase after hyperpolarizing motor neurons) (22). In addition, the results obtained from eccentric contraction data can be attributed to the high intensity of the selected contraction because the best functional response can be observed during longer recovery (seven minutes) (22).

The authors of this article appreciate the cooperation of the subjects of this research who patiently helped the researcher in the research process.

Copyright © 2020, Journal of Archives in Military Medicine. This is an open-access article distributed under the terms of the Creative Commons Attribution-NonCommercial 4.0 International License (http://creativecommons.org/licenses/by-nc/4.0/) which permits copy and redistribute the material just in noncommercial usages, provided the original work is properly cited.
download pdf 186.90 KB Get Permission (article level) Import into EndNote Import into BibTex
Number of Comments: 0