Stomach Cancer in Patients Referred to Tohid Hospital in Sanandaj, 2012 - 2018: An Epidemiological Study 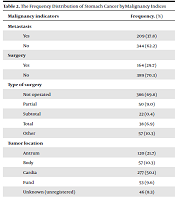 Stomach cancer is the fourth most common cancer in the world and first cancer in Iran. The northern and northwestern regions of the country are areas with a high prevalence of gastrointestinal cancers, especially gastric cancer. Different factors are effective in the incidence of this cancer.

The present study aimed to evaluate the epidemiology of gastric cancer.

This research was a cross-sectional study. All patients referred to Tohid Hospital in Sanandaj between 2012 and 2018 were examined. Data were extracted using patients' medical records. Descriptive information was collected through SPSS software, and the results were analyzed.

The number of patients in this study was 553. The mean age was 66.9 years, and the highest age group was 60 - 80 years. Four hundred twelve patients were male, and 141 were female. In 50% of patients, the location of the cardiac tumor was gastric. Chemotherapy was the most common treatment in more than 60% of patients.

The results of this study show that smoking is unfortunately high in patients in this province. An educational intervention to quit smoking is recommended. Smoking is an important risk factor for gastric cancer, and this intervention may also be effective in reducing the incidence of this disease.

The second leading cause of death worldwide is cancer (1-3). The global incidence of this disease has increased from 10 million per year in 2000 to 15 million in 2020. More than half of these deaths occur in developing countries (4). Lung cancer, breast cancer, colon cancer, skin cancer, prostate cancer, and stomach cancer are the most common cancers in the world (1). Reducing the incidence of infectious diseases, increasing life expectancy, lifestyle changes, and genetic predisposition are some of the effective reasons for increasing the incidence of cancer.

One of the most common cancers of the gastrointestinal tract is stomach cancer. Unfortunately, this disease is mainly diagnosed in advanced stages (5-7).

The classification of this disease is based on two types: Anatomical classification (cardia and noncardia) and histological classification (diffuse and intestinal). Each of them has different causes, symptoms, and prognoses (8). South America, Central America, East Asia, and East Europe are the areas with the highest incidence of this disease, and South Asia, North Africa ,East Africa, Australia, and North America are the areas with the lowest incidence of this disease (9). The incidence and mortality of this disease have decreased over the last 70 years. Despite this decrease, stomach cancer has been identified as the fourth most common cancer in Iran and the second leading cause of cancer deaths. The incidence and mortality of gastric cancer in the north and northwest of the country are higher than in other regions (5). Gastric cancer is more common in men, and smoking and aging are its risk factors (10).

Kurdistan province is one of the regions with a high incidence of gastric cancer in Iran. Therefore, identifying risk factors and epidemiological studies is an effective step in preventing this disease.

This study was approved by the Ethics Committee of Hamadan University of Medical Sciences (IR.UMSHA.REC.1397.103). This research was a cross-sectional and descriptive-analytic study. The statistical population consisted of all patients with gastric cancer identified by pathology tests and referred to Tohid Hospital in Sanandaj from the beginning of April 2012 to the end of March 2018. The data collection was performed using a checklist which was completed by studying the patients’ medical records. This checklist included information such as age at the time of diagnosis by year, a previous history of smoking, tumor location, metastasis location, number of metastases, a family history of cancer in first and second degree relatives, a previous history of cancer (cancer of any type), treatment method, metastasis, surgery, and type of surgery. The data were entered into SPSS software version 24 after initial registration in the checklist. The results of descriptive statistics were calculated and presented in terms of mean and standard deviation, number, and percentage.

According to the results of this study, the sex ratio of the disease (male to female) was 2.9, which is almost similar to Jenabi et al.'s study (the study on the national distribution of the disease in Iran) (11). However, the results of this study were slightly different from the results of Ghasemi-Kebria et al.’s study conducted in Golestan province, which might be due to the difference in the population distribution of these two provinces (12). The mean age of patients in this study was 66.9 years which was similar to Hedayatizadeh-OMRAN et al.’s study conducted in Mazandaran province and was a little different from Nikbakht et al.’s study performed in Fars province, indicating the differences between the age groups of these two provinces (13, 14). In this study, 56.6% of patients had a previous history of smoking which was higher than Toorang et al.’s study performed on patients referred to Imam Khomeini Hospital in Tehran (a hospital which accepts patients from almost all provinces of Iran). The high frequency of smoking probably affects the high prevalence of this disease in Kurdistan province (15). Family history of cancer in first and second degree relatives in this study was less than 4% in patients, , while in Farhadifar et al.’s study, it was less than 12%. On the other hand, in Mehravar et al.’s study conducted in Ardabil province, it was more than 70%. However, this discrepancy may be due to the small number of patients in the study performed in Ardabil province. Due to the contradictory results, investigating risk factors in future studies is recommended (16, 17) In this study, in more than 50% of cases, tumor location was cardia, similar to Gohari-Ensaf et al.’s study carried out in Hamadan province (18). The most common metastasis location in this study was the liver, which was similar to Safari et al.’s study performed in Hamadan province (19).

Stomach cancer is more common in men than women. Smoking is also more common in men than women. Using a proper educational intervention in smoking cessation will probably reduce the incidence of this disease. Since this disease is the most common cancer in Iranian men, it is recommended to plan for educational intervention in the whole country with the priority of the northern and western provinces, which have a high incidence of gastric cancer. The patient age group is mostly 60 - 80 years. Due to increasing life expectancy and aging, appropriate planning for early screening regarding this disease in the country, especially in high-risk provinces such as Kurdistan, is recommended.

This study has been extracted from a master’s thesis in Biostatistics. We thank the Non-Communicable Diseases Research Center and the Vice Chancellor for Research and Technology of Hamadan University of Medical Sciences for approving this work.

Copyright © 2021, Journal of Archives in Military Medicine. This is an open-access article distributed under the terms of the Creative Commons Attribution-NonCommercial 4.0 International License (http://creativecommons.org/licenses/by-nc/4.0/) which permits copy and redistribute the material just in noncommercial usages, provided the original work is properly cited.
COMMENTS