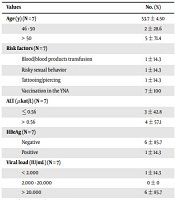 Vaccination in the Yugoslav National Army: A Significant Risk Factor for Acquiring Chronic Hepatitis B Virus Infection During Army Service in the Former Yugoslavia

In the present study, we determined risk factors for acquiring chronic hepatitis B (CHB) infection in patients in Slovenia. This study focused on the detection of a statistically significant risk factor in males, namely “vaccination in the YNA”.

One thousand seven hundred and twenty-nine patients from all Slovenian regions who tested positive for HBV surface antigen (HBsAg) at the national referential laboratory for viral hepatitis diagnostics between January 1997 and December 2010 were included retrospectively. Accordingly, demographic, epidemiological, virological, and clinical data were extracted from the medical documentation and were statistically analyzed.

A significant risk factor for infection in Slovenian men over 46 years of age was identified as “vaccination in the YNA”, which is specific to this geographic region and, to the best of our knowledge, has not been previously described in the peer-reviewed literature.

To prevent the spread of infectious diseases, several state armies implemented obligatory vaccination programs for both conscripts and professional soldiers, also practiced in the former Yugoslav National Army (YNA). However, in the past century, iatrogenic HBV transmissions during vaccinations in armies were well documented, but to the best of our knowledge, no such study was performed in the former Yugoslavia (8, 9).

The present study aimed to define epidemiological, clinical, and virological characteristics of males from Slovenia reporting “vaccination in the YNA” as a risk factor for acquiring chronic hepatitis B (CHB) infection and to examine its importance within the epidemiological situation of CHB in the geographic region of the former Yugoslavia.

In a retrospective study, all patients (n = 1,729) from all regions of Slovenia whose blood samples tested positive for HBV surface antigen (HBsAg) at the Laboratory for Molecular Microbiology and Diagnostics of Hepatitis and HIV/AIDS, Institute of Microbiology and Immunology, Faculty of Medicine, University of Ljubljana were included between January 1997 and December 2010. Available epidemiological, virological, and clinical data were reviewed using medical documentation. Among the patients, seven men reported “vaccination in the YNA” as a risk factor for acquiring CHB.

Different assays for detection of HBV DNA viral loads were used as well. Detection of HBV DNA in clinical samples started in 1997 with the Digene HBV DNA test (Digene Corporation, Gaithersburg, Maryland, USA) using Hybrid Capture II technology. In the same year, the PCR-based test with colorimetric determination of amplified products, Amplicor HBV monitor test (Roche Diagnostics, Branchburg, New Jersey, USA), was employed in routine diagnostics. At the beginning of 2004, the test was replaced with the Versant HBV DNA 3.0 (Bayer Diagnostics, Berkeley, California, USA), a branched DNA-based test, and by the commercial real-time PCR test Abbott real time HBV test (Abbott) in 2007. In addition to the mentioned tests, the Cobas TaqMan HBV test (Roche), a real-time PCR test, was used since 2004 as a supplementary method. In statistical analysis, all results were presented in IU/mL (1IU/mL = 5.6 copies/mL = 0.00002 pg/mL, according to the manufacturer's instructions).

The study was approved by the National Medical Ethics Committee (NMEC) of the Republic of Slovenia (consent number 6/04/15).

Table 1. Risk Factors for Acquiring Chronic Hepatitis B Virus Infection and Their Associations with Age Group and Gender of Individuals Studied (N = 1,122) (Chi-Square Test or Likelihood Ratio Test) a

a Values are expressed as percentage unless otherwise indicated.

There were seven (0.6%) males (mean age ± SD, 53.7 ± 4.50 years) reporting “vaccination in the YNA” as a risk factor for acquiring CHB infection. All investigated males were originally from Slovenia. Among seven cases, six (86.3%) were HBeAg-negative and had viral loads higher than 20,000 IU/mL; also, four (57.1%) cases had alanine aminotransferase levels (ALT) above 0.56 μkat/L. Demographic, epidemiological, clinical, and virological characteristics of males vaccinated in the YNA are summarized in Tables 2 and 3.

Table 2. Demographic, Epidemiological, Clinical, and Virological Characteristics of Males Who Served in the Yugoslav National Army (N = 7) a

Table 3. Demographic, Epidemiological, Clinical, and Virological Characteristics of Males Who Served in the Yugoslav National Army (N = 7) a, b

a HBsAg is positive for all the patients.

b HBeAg is negative for all the patients except patient 1.

Analysis of risk factors for acquiring CHB in terms of age group and gender in included individuals showed “vaccination in the YNA” as a statistically significant risk factor for acquiring HBV infection in men over 46 years of age (P = 0.006) (Table 1).

The unexpected finding of the present study showed the identification of “vaccination in the YNA” as a risk factor for acquiring HBV infection, which was significantly more common in Slovenian men over 46 years of age. This risk factor seems specific to this geographic region and, to the best of our knowledge, has not been previously described in the peer-reviewed literature.

In order to prevent the spread of infectious diseases, several state armies worldwide implemented obligatory vaccination programs of their recruits. During World War II, a notable epidemic of hepatitis B occurred in the United States (US) Army which was linked to yellow fever vaccine containing HBV contaminated human serum (8). Another hepatitis outbreak in the US Army took place between 1971 and 1973 among US military personnel in Fort Hood, Texas, mainly linked to intravenous drug use (IVDU) (10). Sporadic epidemic of HBV infection linked to vaccinations against smallpox and tetanus, typhus and paratyphus A/B (TABT) have been reported in the UK Royal Air Force as well (9).

In the former Yugoslavia, all men older than 18 years of age were required to complete military service in the YNA. In the sixties, all men under 40 years of age serving in the YNA were routinely vaccinated against TAPT (11). According to clinical indications, some recruits also received Calmette-Guérin (BCG) and/or smallpox vaccines (12, 13).

Reports can be found on internet forums written by Slovenian men served in the YNA that describe all recruits in a squad being vaccinated with the same syringe (14).

In 1964, Birtaševič et al. reported an explosive epidemic of HBV infection among recruits serving in a small garrison of the YNA. Altogether, 12 (15.2%) out of 79 recruits were infected, and all of them were vaccinated against TAPT on the same day, showing symptoms 133 - 170 days later (16). The same syringe was used for all recruits and put in boiling water after each injection; however, the exposure time was most probably too short and insufficient. The needles were changed for each recruit, but further examination determined that the syringes were not washed out completely.

Vukšić et al. published a long report on syringe sterilization practices using cooking methods during TAPT vaccination in the YNA and its potential impact on acquiring “infectious hepatitis” during the fifties and at the beginning of the sixties. Syringes were sterilized using either boiling steam at 180°C or boiling water. They found other reasons for the cause of inoculated hepatitis and concluded that TAPT vaccination was not responsible for any sporadic case or small epidemic of hepatitis B among vaccinated YNA staff (17).

The sub-analysis of chronically infected males in our cohort pointed out interesting virological characteristics. The viral loads were extremely high in a majority of the included males vaccinated in the YNA. Animal studies have shown a correlation between the dose of HBV inoculum, the viral load, and the progression of the disease in adult chimpanzees. Very high and very low dose inoculums were associated with a worse clinical outcome, probably due to immunologic factors (18). A possible cause of high viral loads might also be the increased susceptibility of males to the infection due to the influence of androgens, also being supported by the results of a study on transgenic laboratory mice (19). For a susceptible person, the risk of a single needle stick or cut exposure to HBV-infected blood in health-care incidents ranges from 1 to 40% and depends on the HBeAg status of the source individual. Infected individuals with HBeAg positive have higher viral loads and are more likely to transmit HBV than those with HBeAg negative. Risk of transmission in case of HBeAg-positive infection ranges between 22 and 40%, and in case of HBeAg-negative infection it is between 1 and 6% (20). According to a report from 1973, a 6.44% prevalence of HBsAg among 2,500 willing blood donors serving the YNA was found; however, data on the presence of HBeAg are not available (21).

A majority of males in our cohort reporting “vaccination in the YNA” as a risk factor for acquiring HBV infection were HBeAg-negative, being in accordance with known epidemiological data. HBeAg-negative HBV infection prevails in the Mediterranean region (22) and its prevalence in Slovenia has been estimated at 85.5% (23).

Although all males who reported “vaccination in the YNA” as a risk factor for acquiring HBV infection met Slovenian (24) and European Association for the Study of the Liver (EASL) treatment criteria (25), only one received hepatitis B treatment. The reasons for this finding are heterogeneous: (1) four of the cases were not regularly followed-up; (2) one was spontaneously seroconverted; and (3) one was diagnosed with an advanced stage of hepatocellular carcinoma (HCC).

This study has several limitations. The risk factor of “vaccination in the YNA” was added to the study protocol after the retrospective revision of patients’ charts. Since in the former Yugoslavia all men above 18 years of age were required to serve in the YNA, more males of the study population in an appropriate age might have got HBV infection as a result of vaccination in the YNA but they did not recall it as a possible risk factor. Another bias is in lack of some clinical and/or virological data for some of the included individuals. In our study, only the Slovenian population was included. Data could be more relevant if HBsAg-positive males from all republics of the former Yugoslavia were included.

The strength of the study lies in identifying “vaccination in the YNA” as a significant risk factor for HBV infection in males over 46 years of age, which is specific to this geographic region. Since most men over 46 years of age currently living in the countries of the former Yugoslavia served in the YNA, HBV testing and counseling should be routinely offered to this population across the geographic region of the former Yugoslavia.

Copyright © 2021, Journal of Archives in Military Medicine. This is an open-access article distributed under the terms of the Creative Commons Attribution-NonCommercial 4.0 International License (http://creativecommons.org/licenses/by-nc/4.0/) which permits copy and redistribute the material just in noncommercial usages, provided the original work is properly cited.
download pdf 149.73 KB Get Permission (article level) Import into EndNote Import into BibTex
Number of Comments: 0