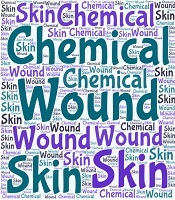 A Review of Management Methods and Modern Treatments for Chemical Wounds

Generally, burns can occur for a variety of reasons, including heat, electricity, cold, and chemical exposure. Chemical burns are very important because of their irreversible and unpredictable physical and mental effects, both at work and at home, even intentionally. Approximately 2 to 11% of burns are chemical burns. In Iran, due to the increasing prevalence of acid attacks in recent years, besides the high growth of industries working with acids, such as dyeing, goldsmithing, and battery manufacturing, the importance of finding a rapid, efficient, and inexpensive treatment method has been highlighted.

Chemical burns are of great importance because of their irreparable physical and mental damage and unpredictability of burn injuries. The potential for the use of chemical and biological weapons has peaked in recent years despite international bans and sanctions. The current crisis in the Persian Gulf and the simple access of terrorists to these weapons indicate the increased risk of exposure to these chemicals. Iraq's invasion of Majnoon Island is a good example of using chemical weapons in modern warfare, causing irreparable damage.

Chemical burns have been reported to account for 1.4 to 8.5% of burn-related hospitalizations (1). In a review article, the records of 59 patients, who had been victims of acid attacks over six years from 2004 to 2010, were reviewed. The findings showed that 51% of the victims were men, and 49% were women. The face and the hands were the most common parts of the body in acid attacks (2). Another study examined the vulnerability of men and women. According to their findings, the men's eyes accounted for the most damage (50.16%). Most skin lesions, especially in the wrists and ankles, were reported in women. Also, mostly second-degree acid burns were reported (3).

The American Burn Association reported that more than 4,500,000 victims of burn injuries are treated annually. Approximately 40,000 victims of acute burn injuries are admitted to hospitals each year, with 4% of cases leading to death. According to the World Health Organization (N365 update), more than 11 million people around the world, including 100,000 to 500,000 victims of chemical injuries, must be hospitalized, with 30% eventually dying (4). Based on a review study from Bangladesh, women accounted for 53% of intentional burns. Accidental burns were also more common at work. About 70% of accidental acid burns occurred in dyeing workshops, fertilizer factories, and pharmaceutical companies. About 16% of burns were also associated with battery and hardware industries, and about 11% of burns were due to the transport of acidic substances (5).

Chemical eye burns lead to irreversible damage to the surface of the eye and limb stem cells, which can persist for a long time. Damage to stem cells can lead to the exacerbation of dry eyes, corneal vascular areas, and corneal opacity (8). Sawhney et al. found that in acid and alkaline burns, the pathophysiology of the injury was different from thermal burns; they most commonly occurred in the head and neck areas, as well as the upper trunk and limbs. The eye involvement was very common in their study. Also, the wound first turned dark brown and gradually became black (9). A team of researchers examined burn wounds for changes in pH and concluded that the natural pH of the skin can be 4 - 7, that is, the range we aimed to achieve with the use of a wound wash. After healing, the pH of the wound decreased. However, deeper burns had a higher pH compared to surface burns (10).

Unlike thermal burns, many chemical burns can cause tissue damage until they are removed and washed from the site; therefore, rapid cleansing of the site from chemicals is a priority (11, 12). The priority of conventional medical treatments is to prevent further complications and reduce inflammation. In a previous study, Pruitt et al. described the measures needed to deal with chemical burns. According to their recommendation, the wound must be quickly washed with water or serum (for at least 30 - 60 minutes for acids and for at least 2 - 4 hours for acnes), and the type of caustic agent must be identified (whether acid or alkaline; if the caustic agent is phenol, it must be first cleaned with ethylene glycol). Then, it must be rinsed with water.

If the cause of burn is a metal, such as sodium or potassium, it should be avoided by washing with water because it produces strong alkali that intensify the burn; they must be rather removed and then washed with water. Hydrofluoric acid burns, even in a small amount, can greatly reduce the fatality rate and calcium level of blood; therefore, calcium gluconate injection in conjunction with intravenous injection is recommended (13). If there are systemic burns, the patient must visit the first medical center. Other treatments include removal of the area or debridement and placement of hydrocolloid dressing (5).

The use of stem cell-based formulations in the treatment of wounds caused by skin lesions has received particular attention in recent years. Mesenchymal stem cells have been mentioned as one of the most useful sources of wound healing in numerous studies. These cells, in combination with other substances, which serve as a cellular scaffold, promote the healing of skin lesions (14-16). However, the use of stem cells is associated with the problem of immune response and tumorigenesis, besides an increased risk of cancer; accordingly, the use of supernatants or stem cell-derived media has been considered (17, 18).

The use of low-power laser was investigated in 2008 for chemical and thermal wounds. This method was significantly different from conventional treatment methods and could be used as a treatment for burn victims (19). In 2005, the effects of vitreous curing with 65% nitric acid on second-degree burn wound healing were investigated. However, no positive effects were reported due to the possibility of cross-species differences in hyaluronan-binding proteins in the vitreous. Besides, molecular hyaluronan has been described in the vitreous (20).

In 2007, amniotic membrane transplantation was used for patients with chemical burns in the eyes. This method was found to be effective in reducing pain and preventing the formation of symblepharon following chemical burns, but it seemed to prevent turbidity and angiogenesis. However, the use of a new cornea was not very effective (21). Moreover, a comparison of the effect of traditional and synthetic dressings in the healing of burn wounds, both thermal and chemical, was performed in 2008. The results indicated that synthetic dressings were more effective than other dressings. Therefore, avoidance of new products and methods is not only reasonable but paying attention to the effectiveness of modern methods is essential (22).

The complications of chemical burns can be divided into two categories: mental and physical. Various studies have examined patients psychologically and reported anxiety, depression, posttraumatic stress disorder (PTSD), social isolation, dropout due to fear and embarrassment, sexual dysfunction, intimacy problems, and sleep disorders. Psychosocial consequences, such as severe psychological trauma, depression, suicidal ideation, and low self-esteem, may also persist for a long time (26-30). Also, skin complications from chemical burns include wounds, infections, and poor healing of skin burns that may require a skin graft. Besides, eye burns, especially those with alkaline burns and hydrofluoric acid, can lead to cataracts or complete loss of vision (26).

Public education should be promoted to prevent the adverse effects of burns in the general public. Rapid treatments, such as washing the wound with water, should be done before visiting the medical centers. Also, given the very high cost of treatment for this type of burn, the importance of low-cost treatment methods has been highlighted.

Copyright © 2021, Journal of Archives in Military Medicine. This is an open-access article distributed under the terms of the Creative Commons Attribution-NonCommercial 4.0 International License (http://creativecommons.org/licenses/by-nc/4.0/) which permits copy and redistribute the material just in noncommercial usages, provided the original work is properly cited.
download pdf 90.61 KB Get Permission (article level) Import into EndNote Import into BibTex
Number of Comments: 0