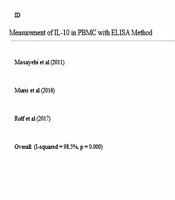 Numerous studies have indicated that vitamin D can modulate the immune system and plays an important role in regulating immune cells’ functions. Some clinical studies have assessed the effect of vitamin D supplementation on cytokine markers in multiple sclerosis (MS) as a disease in which the immune system’s function is disrupted.

This study was designed to assess randomized clinical trial studies evaluating the overall effect of vitamin D on the levels of IL-10, IL-17, and IFN-γ in MS patients.

We searched PubMed and Scopus online databases up to November 2020 for relevant randomized clinical trial studies by using certain keywords. Eight studies from 273 articles, with a total sample of 443 participants, were considered

Further clinical trials are warranted to evaluate the effects of vitamin D supplement on IL-10 and IL-17, and INFγ levels in MS patients.

Multiple sclerosis (MS) is described as an immune system hemostasis disorder (1), in which widespread demyelination occurs in the central nervous system (2). The main mechanism of MS includes an autoimmune inflammatory reaction of the immune system to neurons of the central nervous system (3). Extensive research has been conducted recently to control this inflammatory response in MS patients, but it is still impossible to completely control MS progression (4). Numerous research studies have indicated that nutritional factors are involved in the progression of MS (4, 5). One of the main nutritional factors in MS is vitamin D (6).

Vitamin D is known as a vitamin that can maintain and improve the immune hemostasis (7). A large body of evidence shows that 1,25-Dihydroxy vitamin D deficiency is directly related to the prevalence and severity of many autoimmune diseases (7, 8). Vitamin D can affect T-cell proliferation and functions and can regulate the immune system function to decrease inflammatory markers in the serum of patients with autoimmune diseases (7, 9).

There is a broad range of clinical studies that have assessed the effect of vitamin D supplementation with different regimens and durations of treatment on inflammatory markers in MS patients (9-12). However, there are contradictory results regarding the effect of this vitamin on MS patients, and only in some studies vitamin D treatment has been able to improve inflammatory marker levels. Generally, there is a need for a comprehensive systematic review and meta-analysis to summarize all the available data from clinical trials. Therefore, the current meta-analysis was conducted to encapsulate the current evidence on the effects of vitamin D supplementation on the inflammatory markers in MS patients.

We performed a systematic review and meta-analysis of the randomized clinical trial studies (RCTs) that assessed the effects of vitamin D supplementation on inflammatory markers of MS. For this purpose, we searched PubMed and Scopus databases up to November 2020, using the following search terms: ("Multiple Sclerosis" OR "MS") AND ("vitamin D supplementation" OR "vitamin D" OR "cholecalciferol" OR "ergocalciferol" OR "Calcitriol") AND ("Inflammation" OR "inflammatory") AND (There was no restriction for time or publish language. Also, the references lists of similar articles were screened to avoid missing data. In addition, duplicate articles were excluded.

Studies with the following characteristics were entered into the study: (1) RCTs that assessed the effects of vitamin D supplementation on inflammatory markers (i.e., IL-10, IL-17, and IFN-γ) of multiple sclerosis disease; (2) studies that reported mean ± SDs for inflammatory markers, or any other effect sizes according to which the calculation of mean ± SDs was possible; and (3) studies that included placebo and intervention groups, where the only difference between the two groups was vitamin D intake.

In this meta-analysis, we did not include letters, comments, short communications, reviews, meta-analyses, and animal studies. In our initial search, we retrieved 324 articles from PubMed and Scopus databases. However, 51 studies were duplicates and were excluded. In addition, of the remaining 273 articles, 264 studies were removed from the study after screening the full text. Only eight studies were eligible to enter the study (Figure 1). Five studies had provided data for IL-10 (11, 13-16), three studies for IL-17 (12, 13, 17), and three studies for IFN-γ (14, 16, 18). The flow diagram of the selection process has been shown in Figure 1. 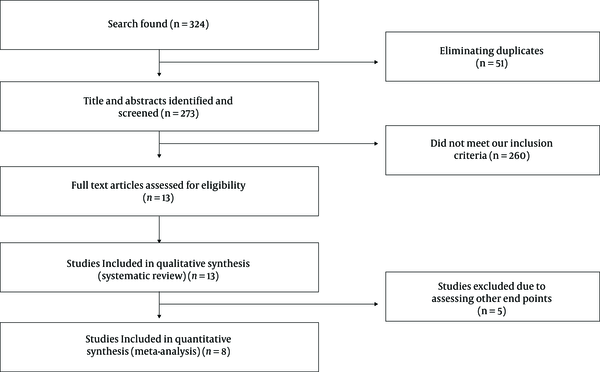 Flow diagram of how to select studies and enter to our assessment (Abbreviation: RCT, randomized clinical trial).

The data collected in electronic sheets (Excel, Microsoft Office) comprised of authors’ first names, year of publication, place of measurement of inflammatory markers, number, sex, and mean age of participants in each groups, sample size, duration of treatment with vitamin D or placebo, duration of MS disease, treatment status with IFN-β, study design, dosage of vitamin D, methods of measuring outcomes, and finally, mean ± SD changes of desired variables. Data were collected by two independent reviewers. When the data were reported in different units, we converted them to the most frequently used unit. Lastly, data from graphical figures were extracted by GetData Graph Digitizer 2.24 (19). The summary of our data is available in Table 1.

Table 2. Assessment of Risk of Bias of Each Included Study

Mean changes of IL-10, IL-17, and IFN-γ were used to calculate effect size. Statistical analysis was performed by STATA Version 13.0 (TX, USA). We used the random effect model for inverse variance. To determine heterogeneity, we used inconsistency (I2). I2 > 50% was significant for heterogeneity. For the assessment of items which have roles in heterogeneity, subgroup analysis was performed for the method of measurement (ELISA or Real-time PCR) with restricting observation for the measurement route of inflammatory markers (serum or PBMC). When we performed subgroup analysis, we use the fixed model of inverse variance. The effect sizes were expressed as weighted mean difference (WMD) and 95% confidence interval (CI).

The summery of characteristics of the eight RCTs assessed in this review is presented in Figure 2. The eight RCTs were published between 2003 and 2018 and were from Iran (11, 13, 14, 17), the USA (18), Israel (12), and the Netherlands (15, 16). Just one study was performed only among female patients (11), while other studies were performed among both genders. In two studies, it was not clear how many patients were treated with IFN-β (13, 18), but other studies determined the percentage of patients that used IFN-β during vitamin D intake. Four studies used PBMC for measuring inflammatory marker levels (14-16, 18), and four studies used serum (11-13, 17). The mean age of the participants ranged between 27 and 45 years old. A total of 443 patients had participated in these studies.

The sample size of the studies was between 15 and 45 participants. Multiple sclerosis in all the participants was confirmed by clinical symptoms. Seven studies included a control or placebo group and an intervention group. In the study of Hashemi et al. 2018 (13), there were three groups: (1) multiple sclerosis, (2) first-degree relative participants, and (3) healthy participants. Also, in Golan et al. 2013 (12) study, the effects of short- and long-term consumption of vitamin D on inflammatory markers was assessed just in the intervention group. The dosage of vitamin D supplementation varied from 14000 IU/day to 300000 IU/30 days, and the duration of intervention spanned from 8 to 48 weeks across the selected RCTs. All the studies had used the parallel method.

In the study of Mahon et al. 2003 (18), participants in the vitamin D and control groups received calcium in addition to the main intervention. Just one study used the Real-time PCR method to measure inflammatory markers (13), while others used the ELISA method. No study was marked as high-quality based on the Cochrane risk of bias assessment tool. Seven RCTs were marked as moderate-quality, and those studies with one or more fields of risk of bias had an unclear mark. One study had low quality since it had a high risk of bias for three more fields (Table 2). In five studies assessing IL-10 marker, four studies showed a significant increase in the level of IL-10, whereas one study (16) revealed no significant change in the level of IL-10. Hashemi et al. 2018 (13) reported a significant decrease in the level of IL-17expression, but in Toghianfar et al. 2015 (17) study, IL-17 rised after the trial in the control group and in the intervention group, IL-17 decreased in comparison to the baseline level. In Golan et al. 2013 (12) study, treatment with vitamin D declined IL-17 marker in three months, but in continuing treatment with vitamin D, IL-17 surged significantly in the intervention group. IFN-γ level did not improve in Muris et al. 2016 (16), and Mosayebi et al. 2011 (14) studies after treatment with vitamin D, and the level of IFN-γ increased in the placebo and intervention groups. In the study of Mahon et al. 2003 (18) also the results were inconclusive and the level of IFN-γ did not change significantly in the placebo and vitamin D supplementation groups.

4.2.1. The Effect of Vitamin D Supplementation on IL-10 Level in MS Patients 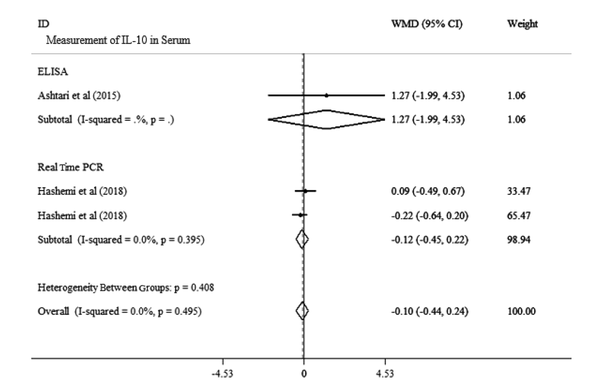 Forest plots for the effect of vitamin D supplementation on IL-10 level in serum analysis in MS patients with subgroup for the method of measurement. Data is expressed as mean differences between the control and vitamin D supplementation groups. The inverse of the variance of the weighted mean difference (WMD) is the area of each square. Horizontal lines represent 95% CIs. Diamonds show pooled mean estimates from fixed-effects analysis. Subgroup analysis was used for the method of measurement. 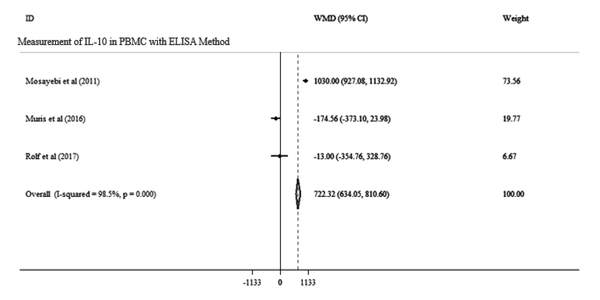 Forest plots for the effect of vitamin D supplementation on IL-10 level in PBMC in MS patients with the ELISA method. Data is expressed as mean differences between the control and vitamin D supplementation groups. The inverse of the variance of the weighted mean difference (WMD) is the area of each square. Horizontal lines represent 95% CIs. Diamonds show pooled mean estimates from fixed-effects analysis.

4.2.2. The Effect of Vitamin D Supplementation on IL-17 Level in MS Patients 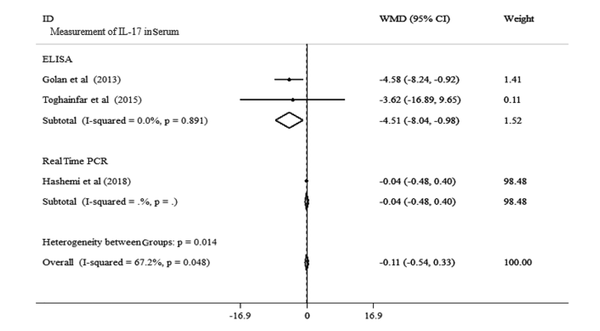 Forest plots for the effect of vitamin D supplementation on IL-17 level in serum of MS patients expressed as mean differences between the control and vitamin D supplementation groups. The inverse of the variance of the weighted mean difference (WMD) is the area of each square. Horizontal lines represent 95% CIs. Diamonds show pooled mean estimates from fixed-effects analysis.

4.2.3. The Effect of Vitamin D Supplementation on IFN-γ Level in MS Patients 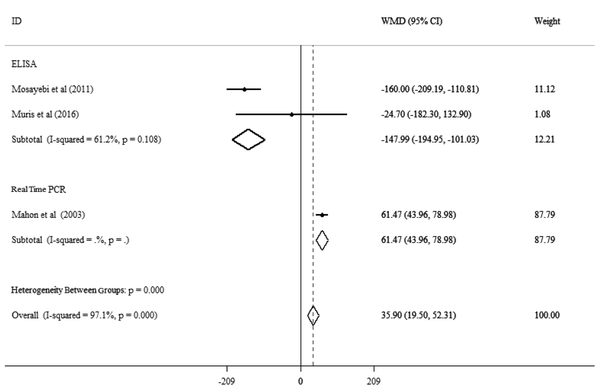 Forest plots for the effect of vitamin D supplementation on IFN-γ level in PBMC of MS patients expressed as mean differences between the intervention and control groups. The inverse of the variance of the weighted mean difference (WMD) is the area of each square. Horizontal lines represent 95% CIs. Diamonds show pooled mean estimates from fixed-effects analysis. Subgroup analysis was applied for the method of measurement.

Also, our meta-analysis showed that the level of IL-17 did not alter significantly following treatment with vitamin D supplementation. However, subgroup analysis exhibited a significant decrease in the serum level of IL-17 using the ELISA methods. IL-17 is known as an inflammatory marker, which can stimulate releasing many cytokine factors and proceed demyelination in MS (23, 24). IL-17 plays an essential role in several autoimmune diseases (25). Analysis of the level of IFN-γ demonstrated no significant change in the level of this marker, but subgroup analysis based on measurement method proved a significant decrease in the level of IFN-γ when using PBMC and the ELISA method. There is a massive immune response in MS patients and many factors are involved in MS; however, there is limit data as to the effects of environmental factors like nutrition and intake of different vitamins on MS.

To evaluate the effect of vitamin D supplementation further clinical trial studies are required. A limitation of this meta-analysis was the limited number of articles performing subgroup analysis for the dosage of vitamin D, duration, and patients who received treatment with IFN-β or not in duration of intervention to determine the effects of these items in the final results. These factors are highly important in the final results of systematic reviews and meta-analyses. In sum, based on the available data, there is a lack of strong evidence corroborating the impact of vitamins on immune factors in MS.

Copyright © 2021, Journal of Archives in Military Medicine. This is an open-access article distributed under the terms of the Creative Commons Attribution-NonCommercial 4.0 International License (http://creativecommons.org/licenses/by-nc/4.0/) which permits copy and redistribute the material just in noncommercial usages, provided the original work is properly cited.
download pdf 645.64 KB Get Permission (article level) Import into EndNote Import into BibTex
Number of Comments: 0