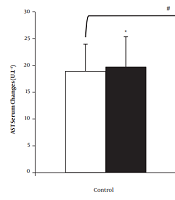 Research on the effects of moderate-intensity endurance training on inflammatory indices and cardiovascular risk factors is limited.

The aim of this study was to determine the effects of six weeks of endurance training on liver enzymes, body composition, lipid profile, interleukin-6, and C-reactive protein responses in people with a family history of coronary artery disease (CAD).

Thirty men (30 - 45years) participated in this study who were divided into two groups, including the control group (n = 10) and training group (n = 20) systematically. The training group program consisted of running on a treadmill for 30 minutes with an intensity of 55 to 60% of maximum heart rate. These training programs were continued three times a week for six weeks. The control group did not perform any exercise program. ELISA technique was used to measure lipid profile, liver enzymes, interlukin-6 (IL-6), and high-sensitivity C-reactive protein (hs-CRP), respectively.

The results of this study suggest that moderate-intensity endurance training could be used as a useful way to reduce weight, levels of inflammatory markers, liver enzymes and cardiovascular risk factors in people with a family history of CAD.

Interleukin-6 is the first cytokine that is increased in response to physical activity in the blood, and CRP has been identified as a sensitive inflammatory indicator and an important predictor in the diagnosis of cardiovascular disease and can be used to identify susceptible individuals (8-10). Moreover, IL-6 is secreted by exercise more than any cytokine. It is mainly produced by adipose tissue, and its amount of circulation in the blood is related to body mass index (BMI) as well as insulin sensitivity and glucose tolerance. Interleukin-6 has pro-inflammatory properties and promotes insulin resistance in both fat cells and the liver. Bijeh and Hejazi (2017) examined the effect of six months of aerobic exercise on resting levels of CRP, insulin resistance, and serum lipid profile of inactive middle-aged women (10). The results showed that serum levels of TG, C-HDL, glucose, and insulin did not change significantly in the experimental group. Although mean levels of CRP and insulin resistance also decreased, this decrease was not significant (10). Tarantino et al. (2014), in a study examined the indicators associated with coronary artery disease (CAD) in obese people and showed that the levels of liver enzymes in these people were higher than normal levels (11). The results of this study also showed that at baseline, CRP was positively associated with IL-6 and inversely associated with aerobic fitness (11). These studies suggest that regular exercise boosts the immune system, while strenuous exercise has the opposite effect on the immune response. According to existing research, few studies have been performed on cardiovascular risk factors and inflammatory indices in people with a family history of CAD.

Therefore, in this study, the researcher intends to investigate the effects of six weeks of moderate-intensity endurance training on serum levels of liver enzymes, lipid profile, and inflammatory indices (CRP and IL-6) in people with a family history of CAD to determine the role of endurance training on some of the effective factors in this disease.

The statistical population of this study was thirty men (30 - 45years) with a positive family history of CAD (CAD under the age of 55 in men in the family and under the age of 65 in women in the family) who complain of chest pain and referred to a heart clinic and were not diagnosed with CAD by physical examination, ECG, echo, and a non-invasive test (exercise Bruce test, heart scan, or angiography) by a cardiologist (12). People were randomly selected and participated in this study and divided into two groups, including the control group (n = 10) and the training group (n = 20) systematically. Inclusion criteria were a positive family history of CAD and negative tests for cardiovascular diseases, and non-use of cardiovascular drugs. Exclusion criteria were also a history of smoking, obesity (BMI > 30), a history of hypertension, diabetes, kidney disease, history of liver disease, regular exercise (at least twice a week). Obviously, subjects, who did not meet these conditions or did not participate in the training program or measure variables during the research process, or were harmed, were excluded from the research process (8). Serum levels of ALT, AST, TG, TC, LDL, and HDL were analyzed using special kits (Pars Azmon Company, i24 model, made in Iran) (6). Serum levels of IL-6 and CRP were also measured using ELISA kit (IL-6: Ratz Fatz kit made in Germany and hs-CRP: monobind kit made in USA). This article was approved by the Ethics Committee of Razi University and complied with the ethical principles of the Helsinki Declaration.

Exercise testing is a standard diagnostic, predictive, and assessment method for evaluating patients with suspected or coronary heart disease. The exercise test, or Bruce protocol, has seven steps of three minutes, which is a total of 21 minutes, starting with a speed of 1.7 mph and a slope of 10% in the first stage. In order to increase the intensity of activity, the speed and slope increased in each stage. In the later stages, the speed increased by 0.7 mph and the slope by 2%. The intensity of activity was considered to be 55 to 65% of the maximum heart rate (MHR) for the subjects. It is obvious that the increase or decrease in heart rate during activity was controlled by the researcher, and based on the target heart rate range, the speed of desire movement increased or decreased. The exercise program consisted of three sessions per week for 30 minutes, including five minutes of warming-up, 20 minutes of main training, and five minutes of cooling-down, and was performed for six weeks. The control group did not participate in any training program (12).

Descriptive statistical variables, such as mean and standard deviation, were used to analyze data. Two-way ANOVA with repeated measures was used to compare within-group and between-group differences. It should be noted that the difference between pre-test and post-test became the unit number of delta (∆). P-value < 0.05 was considered statistically significant.

a Significant difference with pre-test.

b Significant differences with changes (∆) in the control group.

The results showed that all lipid profile variables except HDL in within-group comparison were significant in the training groups (P < 0.05). Also, comparing delta changes using an independent T-test, the results showed that a significant difference was observed between the control and training groups in HDL, LDL, TG, and TC variables (P < 0.05) (Table 1). 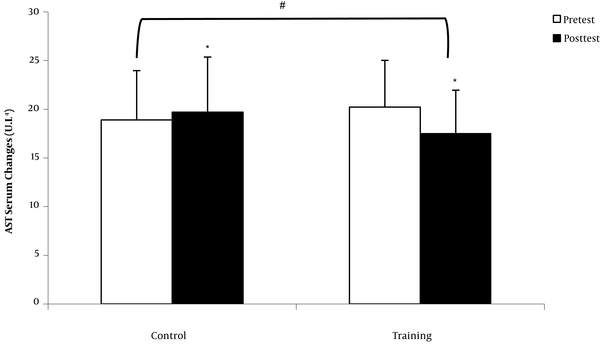 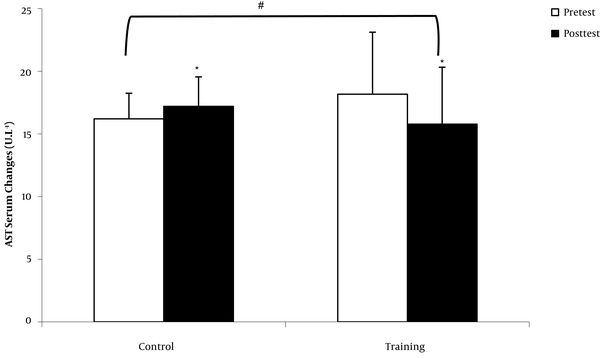 Also, the results showed that in within-group comparison and in CRP and IL-6 variables, there was no significant difference in the control group (P > 0.05), but this difference was significant in the training group (P < 0.05) (Table 1). Also, comparing delta changes using independent t-test, the results showed that a significant difference was observed between CRP and IL-6 variables between control and training groups (P < 0.05) (Figures 3 and 4). Changes in body composition, lipid profile, inflammatory indices of the two groups are shown in Table 1. 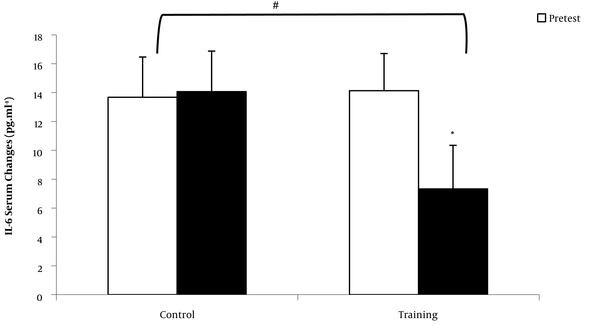 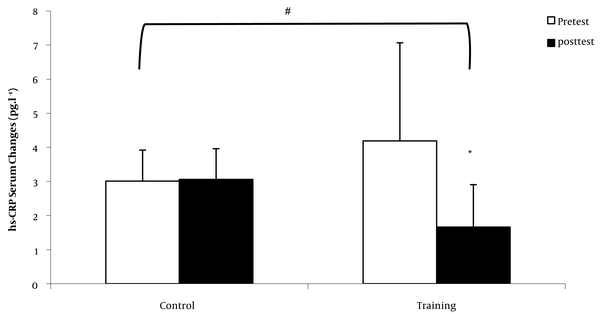 The results of this study showed that six weeks of endurance training significantly reduced the amount of weight in the training group compared to the control group. However, in the training group, no significant difference was observed in the body composition after the post-test. Also, the results of the present study show that despite the body composition reduction in the training group, this difference was not significant with the control group. The results of the study are in line with the results of Pedersen et al. (2016) that evaluated the effect of 12 weeks of aerobic training with 80 - 90% of maximum heart rate on body composition and lipid profile in people with a history of CAD. The researchers reported that despite weight loss, no difference was observed in fat percentage and BMI between the two groups (13). On the other hand, Behboudi and Eizadi (2017), who studied the effect of endurance training on obese postmenopausal women, reported different results. They reported that 12 weeks of endurance training with an intensity of 75 - 60% of maximum heart rate resulted in significant weight loss, body composition, and fat percentage in individuals (14). These results indicate that sex, age, intensity, volume, and duration of training are important factors that can affect the oxidation of fats and activation of mitochondrial enzymes; however, other factors such as feeding the subjects should not be ignored.

Also, in the within-group comparison, the research results showed that except for the HDL variable, all other lipid profile variables had a significant change compared to the pre-test in the training group, but in between-group comparison, all lipid profile variables (HDL, LDL, VLDL, TC, and TG) were significant with the control group. The results of this study are in line with the results of Pedersen et al. (2016), who evaluated the effect of aerobic exercise on the lipid profile of people with a history of CAD (13). They reported that blood LDL levels decreased and blood HDL levels increased after aerobic exercise. The researchers attributed the mechanisms responsible for the change in lipid profile to weight loss and increased physical activity in the subjects. On the other hand, Currie et al. (2015) investigated the effects of 12 weeks of endurance and resistance training on the lipid profile of coronary artery patients. The results of their research showed that only endurance training increased HDL, and serum LDL levels did not change. The researchers concluded that endurance training plays an important role in improving the lipid profile compared to other training methods by increasing the oxidation of fatty acids and increasing the content of oxidative enzymes, glucose transporter content, as well as increasing energy costs (15).

In addition, the results showed that a significant difference was observed between the training and control groups in both ALT and AST variables. In support of the findings of the present study, we can refer to the research of Taniguchi et al. (2016), which examined the effect of five weeks of endurance training with an intensity of 60 - 75% VO2max on fat content and liver enzyme levels in elderly men. They found that endurance training significantly reduced liver enzyme levels (16). But Devries et al. (2008) reported conflicting results after 12 weeks of endurance cycling training with 60 - 75% VO2max in obese individuals (17). The researchers reported that endurance training could not alter the subjects' liver fat content without weight loss. The researchers also reported that there is a very high correlation between ALT enzyme levels and body fat percentage, and liver fat content.

Overall, the results of this study indicate that six weeks of endurance training with an intensity of 55 - 65% of maximum heart rate causes significant weight loss, cardiovascular risk factors, inflammation, and liver enzymes in people with a family history of coronary artery disease. Therefore, this type of training can be considered a useful and suitable method for these people.

The authors of this article appreciate the cooperation of the subjects of this research, who patiently helped the researcher in the research process.

Copyright © 2021, Journal of Archives in Military Medicine. This is an open-access article distributed under the terms of the Creative Commons Attribution-NonCommercial 4.0 International License (http://creativecommons.org/licenses/by-nc/4.0/) which permits copy and redistribute the material just in noncommercial usages, provided the original work is properly cited.
download pdf 157.83 KB Get Permission (article level) Import into EndNote Import into BibTex
Number of Comments: 0