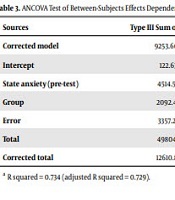 Depression and anxiety as the most common psychiatric problems in survivors of traumatic events pose a significant burden on health systems and families.

This study was conducted to determine the impact of group cognitive-behavioral therapy on the anxiety and depression of war veterans.

This was a quasi-experimental study with pre-test and post-test and a control group. The statistical population included all men with war disabilities who visited Sadra Psychiatric Hospital in Tehran. By convenience and purposive sampling, 116 people were selected and randomly assigned to two groups. Therapeutic interventions (group cognitive-behavioral therapy and Jacobsen's progressive muscle relaxation technique) were applied to each group for 12 sessions, 2 sessions per week and 2 sessions each. Beck’s Depression Scale (Beck, 1961) and Spielberger’s Anxiety Scale (Spielberger, 1970) were used to collect the data. Data was analyzed using analysis of covariance.

The mean scores of anxiety and depression in the post-test phase decreased compared to the pre-test phase (P < 0.05). Therefore, group cognitive-behavioral therapy improved the psychological symptoms of the participants.

Cognitive-behavioral therapy improved cognitive flexibility and diminished anxiety-depression symptoms in war veterans; thus, it can be considered a useful treatment strategy to improve the psychological status of war veterans.

In recent years, especially in the twentieth century, advances in the care and treatment of military trauma have increased (1). Most Iranian veterans suffer from physical problems such as eye problems, spinal cord injuries, lower limb amputations, and zinc deficiency (2). The results of some systematic review and meta-analysis studies indicate that Iranian veterans have a low quality of physical and mental life, and most psychological injuries have been reported among chemical veterans (3). While there is extensive research literature on the physical health of war-torn populations worldwide, the psychological effects of war on survivors are not yet well understood (4). Among the most important of these consequences are mood problems and anxiety that have a negative impact on the personal and social life of war survivors (5). Some studies show that the prevalence of depression in all Iranian veterans is 0.71%. Also, the prevalence and severity of depression in chemical veterans is higher than those in non-chemical veterans (6). In this regard, review of the literature shows that among war survivors, mood and anxiety problems are common, and these psychological problems are associated with numeous problems such as suicidal thoughts and suicide attempts (7), post-traumatic stress disorder (8, 9), and personality disorders (10). Untreated psychological symptoms such as depression and anxiety in the long run, except for their own specific issues, can affect the process of treatment follow-up and medical orders in war-disabled people, exacerbate illness, cause other physical problems, and reduce the effectiveness of treatment, and in turn, lower the survival and longevity of these people (11, 12).

For many years, physicians have used a wide range of methods to relieve the pain of war veterans and survivors. Nowadays, psychological methods are used both individually and in combination with medical methods in the treatment and rehabilitation of war survivors, and research shows the high efficiency of psychological therapies (13, 14). Among these, cognitive-behavioral therapy has a strong theoretical basis, and several studies have confirmed its effectiveness in a wide range of psychological issues and different patients (13-16). The overall goal of cognitive-behavioral therapy is to replace non-adaptive cognitions, emotions, behaviors, and coping skills with adaptive states for clients (17). Recabarren et al. (15) reported that the quality of life and the rate of psychological symptoms (i.e., anxiety, depression, and interpersonal sensitivity) improved in people receiving group cognitive-behavioral therapy compared to those on the waiting list. The study of Bock et al. (16) also showed the positive impact of this treatment on the quality of life, resilience, and executive function of chronic patients.

According to the high prevalence of mood problems and anxiety among war survivors in Iran, this study was conducted to determine the impact of group cognitive-behavioral therapy on the anxiety and depression of war invalids (war veterans).

This quasi-experimental study was conducted with a pre-test and post-test design and a control group. The statistical population of the study included all disabled men from the Iran-Iraq war who visited Sadra Psychiatric Hospital in Tehran. Using the convenience and purposive sampling methods, 144 people were selected from 5000 male veterans and were randomly assigned to the experimental (96 people) and control (48 people) groups. The experimental group was divided into eight groups of 12 people, and the control group was divided into four groups of 12. After the sample attrition, 116 male cases with war disabilities were assigned to the experimental group (76 people) and 40 people to the control group.

Subjects having the handicapped percentage of less than 50%, minimum educational level of primary school, age of 40 to 60 years, and mental disorders (diagnosed by expert psychologists and psychiatrists) were included in this research, while those with a history of addiction to drugs or receiving prescriptions for psychotic disorders were excluded.

Exclusion criteria also included: (1) dissatisfaction and unwillingness of the individuals to continue participating in the study; (2) use of any opiates; (3) psychotropic substances, or alcohol, and absence from treatment sessions for more than two sessions.

After completing the testing schedule, 12 sessions of therapy, each taking two hours, were conducted in the mental health center for war-handicapped, Tehran, Iran. After 12 sessions of therapy, twice per week, 76 participants from the experimental group and 40 from the control group (76 + 40 = 116) successfully completed the therapy. The experimental group underwent group-based cognitive-behavioral therapy, whereas the control group received Jacobson's progressive muscle relaxation technique.

This scale was developed in 1970 by Spielberger. The first form of this scale was introduced in 1970 and its revised form in 1983. The Trait-Mode Anxiety Scale has 40 self-report items, with the first 20 options measuring state anxiety and the second 20 options evaluating trait anxiety. This scale has high credibility and reliability. This scale is rated based on a 4-point Likert scale (very low, score 1 to very high, score 4). On this scale, for both trait and state, anxiety scores range between 20 and 80. Therefore, the score of each subject in each form ranges from 20 to 80 (18).

3.6. The Reliability and Validity of the Data Collection Instruments

Beck Depression Inventory (BDI) Scale has an alpha coefficient of 0.80, and its construct validity has been established. It is able to differentiate depressed from non-depressed patients. Its internal consistency among the undergraduate students was high with Cronbach’s alpha = 0.93 (21). Cronbach’s alpha in this study was 0.87.

To analyze the data, descriptive statistics (i.e., mean and standard deviation) and multivariate analysis of covariance were used in SPSS, version 26. The level of significance in the tests was set at 0.05.

Paired t-test showed a significant difference between the mean of pre-test and post-test scores of dependent variables of psychological symptoms (depression-anxiety) of war veterans in the experimental groups 1 and 2 of the cognitive-behavioral program (Table 1).

Table 1. Comparison of Research Variables by Group and Assessment Stages in Male War Veterans in Tehran a, b, c

Kolmogorov-Smirnov test was used to check the normality of the distribution of scores in the study groups, and the results showed that the level of significance for both groups in both stages of the test and for the studied variables was more than 0.05. (P < 0.05); thus, the null hypothesis of the test is not rejected. Levene’s test was used to test the assumption of equality of variance. Considering that the F-statistic for the dependent variables of the study, that is, depression and anxiety, was greater than 0.05, the assumption of equality of variances between the two groups was accepted (Table 2).

Table 2. Results of Multivariate Analysis of Covariance on the Effect of Group Cognitive-Behavioral Therapy on Dependent Variables in Research Groups

In examining the assumption of homogeneity of variance-covariance matrix, considering that the F-statistic was smaller than the corresponding value in Fisher's table and considering that the corresponding significance level was more than 0.05 (P > 0.05), the null hypothesis of the Box's M test (based on variance homogeneity) was accepted. Also, considering that in the relationship between auxiliary variables (co-scattering) and dependent variables (post-test) a significance level of less than 0.05 was obtained (P < 0.05), it can be stated that the assumption of linearity of the relationship between auxiliary variables (dependent) and dependent variables has been observed. The assumptions of alignment of variables and independence of errors also showed that the tolerance index for the predictor variable was less than 0.90. The variance inflation factor was also less than 10, and the value of the Watson camera-test, which was performed to test the hypothesis of error independence, ranged from 1.5 to 2.5. According to the above assumptions, multivariate analysis of covariance (MANCOVA) test was used. Also, the results of four multivariate analysis of covariance tests (Pilay effect, Wilkes lambda, holding effect, and largest Ray root) related to the difference of research variables were statistically significant. Therefore, the two groups were significantly different in at least one of the studied variables in the post-test stage (Tables 3 and 4).

In line with the present finding, Lee et al. (23) showed that the use of cognitive-behavioral program in addition to improving lifestyle in patients with chronic pain reduced mood symptoms and stress. Explaining the findings of this study, it can be stated that psychological symptoms are important factors in the development of psychiatric illnesses and follow-up treatment. Psychological symptoms and the stresses caused by these symptoms peak during the illness period and make the problems caused by physical illnesses more pronounced among veterans. Theories in this field and the interventions based on them have always sought to develop and promote theoretical and practical models regarding how irrational thoughts are formed and methods to control them (15, 22, 23).

Documents of war veterans with depression are quite depressing; thus, the positive effect of cognitive-behavioral therapy on depression in war survivors with disabilities due to the use of cognitive methods, including the identification of negative thoughts, knowing the difference between logical and irrational self-talk, and doing exercises such as relaxation, objectivity, and behavioral muscle relaxation, can justify lowering depression scores in this group of clients. Consistent with the present finding on the effectiveness of cognitive-behavioral therapy in reducing depression and anxiety in war veterans, previous studies such as Lau et al. (25) and McGinn et al. (26) have shown that cognitive-behavioral therapy reduces mood problems and increases client resilience. In the same vein, it can be stated that this approach can help free people from unwanted thoughts and habits and unhealthy patterns of behavior. Hence, patients realize their abilities and increase their resilience by changing roles in life. By increasing cognitive-behavioral skills, individuals develop a stronger sense of control.

We appreciate the participants in the research and the officials of Sadra Psychiatric Hospital in Tehran who helped us in this research.

Copyright © 2021, Journal of Archives in Military Medicine. This is an open-access article distributed under the terms of the Creative Commons Attribution-NonCommercial 4.0 International License (http://creativecommons.org/licenses/by-nc/4.0/) which permits copy and redistribute the material just in noncommercial usages, provided the original work is properly cited.
download pdf 110.89 KB Get Permission (article level) Import into EndNote Import into BibTex
Number of Comments: 0