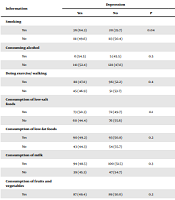 One of the effective factors in the healthy living of the elderly is health-promoting behaviors.

This study aimed to investigate the relationship between health-promoting behaviors and mental health in elderly military veterans in Iran.

The results showed that among the health-promoting behaviors, non-consumption of alcohol, controlling blood pressure, and not smoking had the highest frequency, and the injection of influenza vaccine had the lowest frequency. The relationship between health-promoting behaviors and the level of mental health showed that smoking, stress, alcohol consumption, and not exercising had a significant relationship with anxiety and stress (P < 0.05). Also, the individuals who consumed more fruits and vegetables had less stress than those who consume lower amounts of these foods (P < 0.05). Also, people who consumed low-salt, low-fat, and dairy-based foods, controlled their blood pressure regularly and had received the flu vaccine had a better mental health.

According to the results, a special attention should be paid to these factors in planning to teach health-promoting behaviors to improve health and counseling services in the elderly.

Healthy behaviors are normal daily activities people do to keep their health (1). According to Pender, health-promoting behavior is defined as any behavior that is done to increase or maintain a person's level of health and self-actualization level, leading to optimal well-being, personal development, and creative life (2). The American Journal of Health Promotion defines health promotion as the science and art of helping people to change their lifestyle and movement toward a better state of health (a balance of physical, emotional, social, spiritual, and intellectual health) (3). Health-promoting behaviors are classified into such items as social relations, hygienic health, health responsibility, self-esteem, stress management, nutrition, and physical activity. Health-promoting behaviors help people by getting proper nutrition, having balanced exercise, avoiding destructive behaviors and drugs, protecting against accidents, on time diagnosis of diseases, control of emotions, feelings, and thoughts, coping with stress and mental health problems, and adjustment and improvement of social relationships. The prerequisite for health-promoting behaviors is having a healthy lifestyle and self-care activities (4, 5).

Improving and maintaining a healthy lifestyle is a global challenge for health professionals (6). The expansion of urbanization and mechanized life, despite making life easier, can have the opposite effect on various dimensions of human health, one of which is the mental health (7). In today's modern world, socio-economic development has led to decrease in population growth and an increase in life in global level, so that people live longer, and as a result more people can experience old age (8). Aging and the aging process by itself can lead to significant issues and challenges, although aging can not necessarily be equated with decreasing health or increasing disability (a common perception). But the increasing trend of aging can create various economic, social, health, and psychological problems (9).

Disorders such as depression, anxiety, memory loss, changing sleep patterns, loneliness, and social isolation may be due to such problems as job loss, social status, retirement crisis, loss of beloved ones, leaving home as children, health loss, physical ability, economic stability, reduced senses, and changes in self-image; all these factors endanger the mental health of the elderly. Due to the increasing age and further incidence of health problems, health-promoting behaviors have become more important, and improving psychosocial satisfaction has become a serious concern worldwide (10).

In 2019, the number of elderly population (over 60 years old) in Iran was 8,231,000 people, which was about 9.9% of the country's population. Also, the population of people aged over 65 years was 4.6% of the country's population. During the last two to three decades, the total population growth in Iran has been 24.1%, while the growth rate of the elderly population was 62.3%, which is almost three times of the total population growth. It is predicted that the share of the elderly population will exceed 10% in 2021, and it will exceed 4.19% in 2041 (11). The main difference between developed and developing countries such as Iran is that the government and the people in developed countries are fully prepared to face the challenge arising from the growing number of older people. However, developing countries are not aware of the economic, social, and health problems of this issue (12).

Therefore, to maintain the health of elderly people and prevent the incidence of chronic diseases in them, the first step is to identify their health status to determine the health and medical needs (13).

Since the assessment of health status in a community is very important to determine the type of intervention and anticipation of social and health needs, this study was conducted to investigate the relationship between health-promoting behaviors and mental health in elderly military veterans in Urmia. Therefore, the results of this study can be used by policy makers and planners to design effective interventions to improve the health-promoting behaviors of these people.

In this descriptive-analytical study, 280 individuals were included using the available sampling method. The study population included all the elderly military veterans (over 60 years) who referred to the military health center in Urmia, Iran, during the second half of 2019. All participants participated in the study voluntarily. The participants were excluded from the study if they had a history of mental illness. The tool used was a questionnaire comprising three main parts as follows: demographic information, health-promoting behaviors, and mental health assessment.

The Health Promoting Behaviors Questionnaire used a checklist of health-promoting behaviors that included 10 items: smoking, drinking alcohol, exercising or walking (at least three times in a week for 20 minutes each time), low-salt diet, low-fat diet, consumption of fresh vegetables, and fruits, consumption of milk, dairy and meat dishes (usually), blood pressure control (in the last year), health control (doing a variety of tests in the last two years) and injection of influenza vaccine (in the last year). All questions were answered by yes or no; 1 point was given to ‘yes’ answers and 0 point to ‘no’ answers. This questionnaire was used by Habibi cited in Azadbakht et al. (2014) (14) and Barati et al. (2012) in Iran (15), and its reliability was confirmed by retest method (r = 0.9).

The questionnaires were completed after explaining the objectives of the research and obtaining a written informed consent from all participants. In the case of illiterate participants, the questionnaires were completed by the interviewer. Data were entered into SPSS software v20 and analyzed by chi-square and Fisher tests. Also, the confidentiality of the information was assured.

In terms of health-promoting behaviors, not consuming alcohol, controlling blood pressure, and not smoking had the highest frequency with 96.1, 88.2, and 80%, respectively, and injection of influenza vaccine had the lowest frequency with 37.5% (Table 2).

Table 2. Frequency Distribution of Participants in Terms of Health-Promoting Behaviors

Studying the relationship between health-promoting behaviors and mental health level showed that smoking, stress, alcohol consumption, and not exercising were significantly associated with anxiety and stress (P = 0.05). People who consumed more fruits and vegetables had less stress than those who consumed less fruits and vegetables (P = 0.05). Also, people who consumed low-salt, low-fat, and dairy-based foods, controlled their blood pressure regularly, and received the flu vaccine had better mental health (Table 3).

In this study, most of our cases were in the age ranges of 65 - 60 and 70 - 65 years, respectively. Also, the majority of participants were male and married, which was consistent with the study by Reisi et al. (2014) (18). Most of the participants had finished elementary/middle school, or had a diploma, respectively; but in the studies by Sargazi et al. (19) and Habibi et al. (20), the level of illiteracy was higher, which could be due to different employment conditions. Most cases had average economic status, and 9.3% had chronic diseases. Not consuming alcohol, controlling blood pressure, and not smoking had the highest frequency. The frequency of not consuming alcohol, not smoking, and consuming low-salt and low-fat foods was consistent with the findings of Chen et al. (2018), Sargazi et al. (2012) and Reisi et al. (2014) (19-21). Lee et al. (22) stated that the reason for non-consuming alcohol and smoking among the elderly is not due to the presentation of health promotion programs in the community, but it is due to their current low health status. Also, due to the prevailing culture in Iranian society and the Islamic rules regarding alcohol consumption, this health-promoting behavior had a high frequency in our study. Also, due to the prevalence of hypertension among the elderly, the high frequency of this behavior among the participants can be due to the prevention of side effects of this disease.

In our study, the frequency of exercising and walking was 65.7%, while in the studies by Sawatzky et al. (2007) and Sarkisian et al. (2005) it was 35% and 38%, respectively (23, 24). This difference may be due to the fact that our participants were military officers, and daily exercise was part of their schedule since their employment. The findings of the mentioned studies were consistent with our findings in terms of routine testing and control of blood pressure (25). However, the prevalence of influenza vaccine injection was lower than other behaviors, possibly due to the lack of access, lack of knowledge about the benefits of the vaccine, high cost, and lack of vaccination services through the country's health networks. In terms of the relationship between health-promoting behaviors and mental health, the findings showed that mental health had a statistically significant correlation with the behaviors of not smoking, exercise or walking, consumption of fresh fruits and vegetables, not drinking alcohol, and blood pressure control, which was consistent with the findings of a similar study (12, 18, 21). Due to the decreasing in physical strength, impatience, and some chronic diseases, old age usually reduces the tendency to perform health-promoting behaviors. Physical activity, sports, and entertainment can create a lively and satisfying life for the elderly people and have an effective role in ensuring their mental health (10).

Considering the vulnerability of the elderly people and increasing their population in Iran in near future and the challenges arising from it, planning to face these challenges is vital. Also, the lack of planning and policy-making in this area can be a serious social, economic, and health problem. So, a special attention should be paid to these factors in planning to teach health-promoting behaviors and improve health services and counseling in the elderly people.

We appreciate the cooperation of all participants in this study.

Copyright © 2022, Journal of Archives in Military Medicine. This is an open-access article distributed under the terms of the Creative Commons Attribution-NonCommercial 4.0 International License (http://creativecommons.org/licenses/by-nc/4.0/) which permits copy and redistribute the material just in noncommercial usages, provided the original work is properly cited.
download pdf 100.49 KB Get Permission (article level) Import into EndNote Import into BibTex
Number of Comments: 0