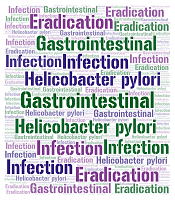 Elimination of Helicobacter pylori Infection in Patients with Gastrointestinal Problems After Administration of Four-Drug Regimen: A Brief Report

There are a variety of treatment regimens containing several antimicrobial compounds to treat Helicobacter pylori infection.

The aim of this study was to eradicate H. pylori infection in patients with gastrointestinal problems after the administration of a four-drug regimen.

This study was performed among 100 patients with gastrointestinal problems visiting Imam Khomeini Hospital in Urmia, Iran. The data were collected using a checklist that included patient information and analyzed by chi-square and t-test.

Helicobacter pylori infection is one of the most common human bacterial infections, affecting about 50% of the human population, and its prevalence varies considerably between countries as well as population groups in each country. The prevalence of this infection in adults is 80% in the developing countries and 20% in European countries (1, 2). Helicobacter pylori infection in children is often caused by ingestion. There is currently no evidence of animal transmission, and transmission appears to occur through personal contact and mouth-to-mouth and faeco-oral routes of transmission. Spontaneous bacterial removal is relatively common in childhood, but H. pylori infection in adults usually does not improve without specific treatment (3).

The eradication and treatment of H. pylori requires a treatment regimen with drugs to which the bacteria are sensitive. The most effective treatment regimen approved by the Food and Drug Administration (FDA) is a combination of a pump inhibitor protons and amoxicillin, and clarithromycin. Studies have shown that the addition of bismuth salts also enhances the effect of antibiotics (4-6). Because the pattern of antibiotic resistance may vary from person to person, the effectiveness of drug regimens also differs according to regional conditions. Helicobacter pylori has also been linked to several diseases, including gastric and duodenal ulcers, gastric cancer, and lymphoid lymphoma associated with the mucosa (7-9). Sometimes H. pylori treatment requires the combination of different antibiotics and the repetition of the course of treatment, which affects all the factors of consumption.

The aim of this study was to evaluate the eradication of H. pylori infection in patients visiting the gastrointestinal clinic of Imam Khomeini Hospital in Urmia as a short report.

This study was performed among 100 patients with gastrointestinal problems in Imam Khomeini Hospital in Urmia. The patients were divided into the two groups of indigestion and pain after eating. All the patients were diagnosed by a gastroenterologist through endoscopy, the H. pylori sample was detected by a laboratory specialist, and the information was collected by a checklist. Patients who had positive specimens for H. pylori underwent experimental treatment with a four-drug regimen. The four-drug regimen included amoxicillin 1000 mg, bismuth 250 mg, and clarithromycin 500 mg, all twice daily, and one proton pump inhibitor (i.e., lansoprazole, omeprazole, or pantoprazole). The treatment period was two weeks. Eight weeks after completing the course, the patients were tested for anti H. pylori antibody in the feces to determine the rate of eradication of the infection. Samples were tested with the diagnostic kit for fecal H. pylori antigen manufactured by Intex Corporation of Switzerland with a sensitivity of 93.2% and specificity of 97.2%. Patients with Barrett's esophagus or gastrointestinal cancers were excluded from the study. Data were analyzed using descriptive statistics, chi-square, and t-test in SPSS version 18. A P-value of less than 0.05 was considered significant.

In this study, after receiving the four-drug regimen treatment, anti-H. Pylori antibody in the feces was used to evaluate the elimination of H. pylori infection. The success rate of the four-drug regimen in eradicating the disease was 68.4%. Twenty-three (88.5%) of the patients were pain type, and 3 (11.5%) patients had to postprandial distress. The rate of eradication of H. pylori infection in pain type patients was 76.7% (23 patients), and in patients with postprandial distress it was 37.3% (3 patients). According to the statistical analyses, there was a significant relationship between the success rate in eradicating H. pylori infection in the treatment by four drugs and the type of dyspepsia (P = 0.049).

In follow-up, symptoms of dyspepsia were recovered in 76 (76%) patients. Among the recovered patients, 55 (72.4%) patients previously had pain type dyspepsia, and 21 patients (27.6%) had postprandial distress. According to the statistical analyses, there was a significant relationship between the type of dyspepsia and the improvement of symptoms after receiving the four-drug regimen (P = 0.042).

Numerous attempts have been made to determine the group of patients with H. pylori infection requiring treatment, and various results have shown that patients with peptic ulcer and those with indigestion should be treated (9).

One of the most significant endoscopic findings was pre-pyloric ulcer found in 15 (15%) patients. Twenty (20%) patients were diagnosed with antral ulcers. Eighteen (18%) patients had duodenal ulcers, and one patient suffered from gastric ulcer. In general, non-ulcer dyspepsia can be distinguished from gastric ulcer dyspepsia by an experienced gastroenterologist during endoscopy. It should be noted that three quarters treatment were not diagnosed without endoscopic findings (10, 11).

One of the study variables was the relationship between the presence of H. pylori infection and the type of indigestion. In pathological study of gastric patients, 38 (38%) cases of H. pylori colonization were reported, 30 (78.9%) of whom had pain and 8 (21.1%) had post-meal distress, indicating a significant difference (12, 13). Among the patients with H. pylori infection, the success rate of the four-drug regimen in eradicating the infection was evaluated at 68.4%. Twenty-three (88.5%) patients were in the pain type dyspepsia group, and 3 (11.5%) patients were in the postprandial distress group. According to the statistical analyses, this difference was statistically significant, and the response to treatment was higher in patients with pain type dyspepsia. In various studies, six to nine months after the complete eradication of H. pylori among patients with dyspepsia the severity of pain was moderated (14, 15).

This finding confirms our results. However, in the study of Contreras et al. in Venezuela, it was reported that after six to nine months of eradication of H. pylori infection, the pathological grade of esophagitis was increased (16). The reason for decrease in pain intensity was not apparent, but some suggested that the return of acid production to the average level after eradicating H. pylori bacteria reduced the symptoms of reflux, lowering the severity of pain in the two groups of patients (17). It has also been shown in some studies that after an increase in H. pylori in patients, the rate of bacterial colonization decreases, and the severity of esophagitis in patients subsequently declines, as a result of which the repair of damaged cells gradually takes place, and in case of any reflux, patients with less pain intensity will be affected. Some studies have shown that serum gastrin levels fall after the eradication of H. pylori, followed by a reduction in pressure in the lower esophageal sphincter, which can be beneficial in reducing the pain of patients with dyspepsia (2, 16, 18).

Our results exhibited a significant association between the four-drug regimen and the rate of infection reduction, and the improvement of symptoms in patients with postoperative indigestion was much greater than in those with postoperative heartburn.

Copyright © 2021, Journal of Archives in Military Medicine. This is an open-access article distributed under the terms of the Creative Commons Attribution-NonCommercial 4.0 International License (http://creativecommons.org/licenses/by-nc/4.0/) which permits copy and redistribute the material just in noncommercial usages, provided the original work is properly cited.
download pdf 86.90 KB Get Permission (article level) Import into EndNote Import into BibTex
Number of Comments: 0