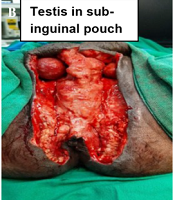 Fournier’s Gangrene: A Novel Approach and Pushing the Envelope to a Case of Abdominoperineal Necrotizing Soft Tissue Infection in Peripheral Hospital Setup and Review of Literature

Fournier’s gangrene is a rapidly progressive necrotizing soft tissue infection with very high mortality and is due to evolving synergistic polymicrobial infections of aerobes and anaerobes in perineum and genital area. Multiple predisposing factors include diabetes mellitus, alcoholism, immunosuppression, renal and hepatic disease. In the vast majority of cases, scrotum is most commonly affected.

The prognosis of the disease is not limited to the patient’s age, disease extent, and comorbidities. Treating such cases is always challenging for a surgeon and requires high expertise and quick decision.

The aim of this report is to share our experience of a multimodal and multidisciplinary approach to this disease in peripheral hospital with resource constraints.

Fournier’s gangrene (FG) is a rapidly evolving synergistic, polymicrobial, necrotizing soft tissue infection of the perineum and the genital area (1, 2). In the majority of cases, scrotum is most commonly affected (1). It is no doubt a surgical emergency (3) requiring aggressive surgical debridement and antibiotics (4). Fecal diversion used in Fournier’s gangrene gives conflicting results (2, 5). There is no clear evidence of the usefulness of a stoma in the treatment of this disease (5). Despite advances in surgical care, the mean expected mortality rate worldwide is approximately 25% (6) but varies widely from 0% to 76% (7). Emergency surgery does often expose the testis shamefully. Applying negative pressure wound therapy (NPWT) over exposed testis invites various innovative ideas and throws a challenge to the surgical mind. Reconstruction of the scrotum was also an additional challenge. The aim of this report is to share the experience of multimodal and multidisciplinary approaches to this disease.

A thirty-seven years old male with no known comorbidities developed perineal abscess of 04 days duration and underwent incision and drainage (I&D) at a civil hospital. On post-operation day 02, he developed fever and noticed swelling in scrotum and foul-smelling pustular discharges from the wound (Figure 1A). He then reported to our hospital and was diagnosed with Fournier’s gangrene with abdominoperineal necrotizing soft-tissue infection (NSTI). He underwent emergency debridement.

He underwent serial debridement and multiple wet-to-dry antibiotic dressings. He also underwent laparoscopy-assisted diversion loop transverse colostomy on post-operation day 07 (Figure 2A). Two sessions of modified NPWT were given after creation of sub-inguinal pouch (Figure 2A). Testis was fixed in the previously created pouch (Figure 3B - C). Split skin graft (SSG) cover was placed over the remaining healthy raw wound (Figure 2B). He then underwent a restoration of bowel continuity after eight weeks of stoma creation. Now, the patient has healed all his wounds and is happy.

A, Initial presentations; and B, Intra-operation findings.

A, Modified NPWT application after laparoscopy-assisted transverse colostomy; B, After SSG; and C, Wound after 06 weeks.

A, Wound after debridement and dressing; B, Wound after placing testis in sub-inguinal pouch; C, Wound defect after fixation to testis to the pouch.

As Fournier’s gangrene is a rapidly progressing and potentially fatal condition, emergency debridement and antibiotics are first-line treatments. The proximity of the wound to the anal canal posed a challenge due to frequent soiling of the wound with fecal matter. Hence, we decided to perform diversion colostomy and subsequent NPWT. Various authors performed stoma formation to protect the wound from fecal contamination (2, 8, 9). However, the problem in mind was the placement of testis and reconstruction of the scrotum. It was then decided to create a sub-inguinal pouch so that testis could be saved from drying and was performed. We preferred the laparoscopic approach over open procedure as there is a better outcome in laparoscopic stoma creation in many studies (10, 11). Laparoscopy-assisted diversion colostomy was performed, and then sub-inguinal pouch was created. We used two ports technique where 10 mm umbilical port was used camera port, and another 5 mm port was placed at our marked site for transverse colostomy. Second port was used to hold the transverse colon, and later on, it was converted to transverse colostomy site. Such laparoscopy-assisted technique saved intra-operation time and reduced morbidity of the patient. Ratan et al., in one of their studies, described the temporary placement of testis in sub-inguinal pouch and placement to other opposite hemiscrotum (12). However, both hemiscrotum was extensively involved and gangrenous. Hence, testis was placed in the newly created pouch and fixed on both sides. Modified NPWT was applied. Due to difficulty in getting a proper NPWT machine and accessories at peripheral set up, modification of the technique was done as per available resources as described by Singh et al. in his study (13). In this modified NPWT, properly sterilized polyurethane (car seat) foam and a suction machine were used to generate negative pressure suction (13). After two more sessions of modified NPWT, reconstruction of scrotum was planned as there was a huge scrotal skin loss. SSG over testis appeared a huge challenge for a general surgeon in peripheral setup. SSG was done for reconstruction of Scrotum. Restoration of Bowel continuity was done after eight weeks. There was no mortality or morbidity occurred. Patient satisfaction was 100%.

Treatment of Fournier’s gangrene may sometime require a multimodal and multidisciplinary approach. Stoma creation and NPWT reduce the hospital stay. Laparoscopy-assisted colostomy is a better modality of fecal diversion. Sub-inguinal pouch can be used as one of the options for placing testis when there is no scrotum left for reconstruction.

Copyright © 2022, Journal of Archives in Military Medicine. This is an open-access article distributed under the terms of the Creative Commons Attribution-NonCommercial 4.0 International License (http://creativecommons.org/licenses/by-nc/4.0/) which permits copy and redistribute the material just in noncommercial usages, provided the original work is properly cited.
download pdf 9.71 MB Get Permission (article level) Import into EndNote Import into BibTex
Number of Comments: 0