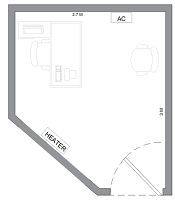 Effect of Environmental Temperature on Working Memory in Military Personnel

This study was conducted to determine the effect of thermal environment and thermal sensation on working memory.

Each of 20 male adult participants, physically and mentally healthy aged 19 - 29 years, experienced seven thermal conditions (office room climate: 14°C, 17°C, 20°C, 23°C, 26°C, 29°C, and 32°C) over four months. Before the test, they waited 40 minutes in the room for adaptation. The thermal sensation questions were asked from them, and working memory was measured with the n-back test.

Work-related accidents are among the most critical reasons for morbidity and mortality worldwide. The International Labor Organization reported that at least 1.9 million people die from work-related accidents, and 90 million years of life are estimated for people with disabilities caused by occupational accidents (1). Studying major events such as the Three Mile Island in the United States, Bhopal in India, Chornobyl in the former Soviet Union, and thousands of other incidents shows that in more than 70% of accidents, unsafe behaviors and human errors have been the critical factors (2, 3). Human errors often result from reduced focus, attention, and working memory.

The increasing complexity of today’s industrial and military systems has significantly imposed a mental workload and increased pressure on human labor (4), increasing the likelihood of human error. Since preventing human error is essential, studying cognitive functions under different thermal conditions is significant for determining workplace design parameters in environments where most work is cognitive.

Previous studies show that the thermal environment is often associated with cognitive functions (5-7). Achieving the highest cognitive performance is especially important in critical jobs such as military jobs, rescue teams, or crisis management-related jobs, as military personnel may work in environments with extra hot or extra cold temperatures.

In this research, we studied the effect of the thermal environment on working memory as one of the cognitive functions. Working memory is a cognitive system with a limited capacity. This system can hold information temporarily and for a limited time (8). Active memory is essential for guiding decisions, reasoning, and behavior (9, 10). Research about the effect of environmental temperature on memory has shown mixed results. In some cases, the researchers found a relationship between temperature and memory (11-13), and in some other cases, no significant results were found (14-17). Since in previous studies, the relationship between thermal sensation (18, 19) and its effect on cognitive functions were assessed, this issue was also examined in this study. People in a stable temperature environment have different thermal sensations due to individual differences such as age, gender, basal metabolic rate, type of clothing, and metabolic rate.

This research investigated the effect of environmental temperature and thermal sensation on working memory.

There were 20 adult participants physically and mentally healthy aged 19 - 29 years. Due to the effect of the menstrual cycle on thermal sensation and its consequences, and as the test time lasted more than a month, female subjects were not included in this study. The participants’ demographic information, including gender, height, and body weight, is summarized in Table 1. Individuals with a history of neuropsychiatric diseases such as attention deficit, brain damage, and epilepsy or who were currently taking medication for these mental disorders were excluded from the study. Since the working memory in this experiment was measured with a computer test, all participants were familiar with the computer. There was also a single pattern to cover participants (underwear, T-shirts, pants, ankle boots, and shoes). All experiments were conducted during the daytime. The order of experiments and the time pattern were balanced among the subjects, as shown in Table 2.

Table 1. Demographic Information of the Individuals
Table 2. Order of the Experiments for Each Subject

All 20 subjects experienced seven conditions (office room climate at seven temperatures of 14°C, 17°C, 20°C, 23°C, 26°C, 29°C, and 32°C) over four months, and each subject was exposed to two conditions per day. Features of the office are shown in Figure 1. All experiments were conducted during the daytime. The participants moved to the office room climate, and their electrodes were connected to a computer. They waited 40 minutes before the test in the room for adaptation and to practice the working memory test. Then, the thermal sensation questions were asked from them. The ASHRAE scale was used to measure the thermal sensation. This scale has seven points, namely, “hot,” “warm,” “slightly warm,” “neutral,” “slightly cool,” “cool,” and “cold.” In this step, the working memory was measured with the n-back test. The mentioned time divisions are presented in Figure 2. 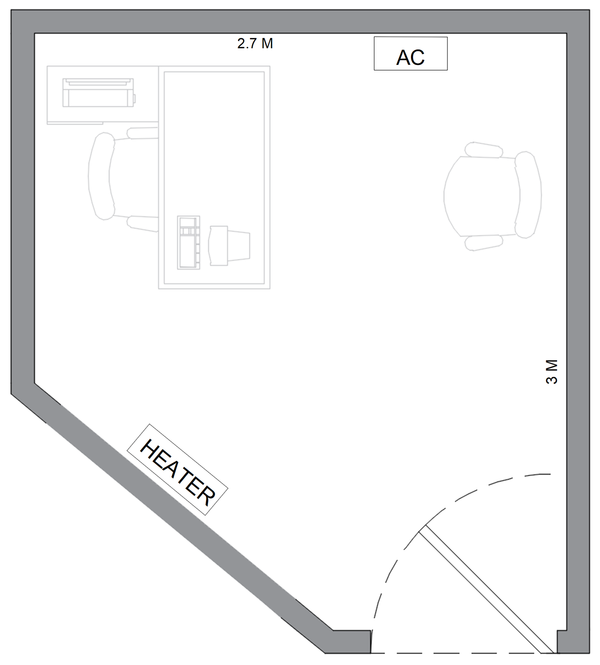 In the n-back test, the subject must determine from a series of stimuli when one stimulus matches the stimulus of the previous n set. This test has three cognitive levels (n = 1 means low workload, n = 2 means medium workload, and n = 3 means high workload). Kirchner introduced this test in 1958 for the first time (20). In recent years, this test has been widely used in various studies to measure working memory (21-23). The institute of behavioral and cognitive science changed this test to the Farsi model in 2014 (24).

Table 3. Relationship Between Working Memory and Environmental Temperature in 21 Conditions

To achieve more precise results, we divided the temperature conditions into four groups: Extremely hot and extremely cold (14°C, 32°C), hot and cold (29°C, 17°C), mild (20°C, 26°C), and natural (23°C). In these conditions, as seen in Table 4, the changes in working memory between extreme temperatures (14°C, 32°C) and two conditions (20°C and 23 - 26°C) were significant. In the other conditions, the relationships were not significant.

The relationship between thermal sensation and working memory was investigated. The participants selected one item from seven options describing their thermal sensation after 40 minutes in the office room climate. All 21 conditions for comparison are shown in Table 5. The results were significant in 19 cases and insignificant in two cases (between cool and warm and between slightly cool and slightly warm).

Table 5. Relationship Between Working Memory and Thermal Sensation in 21 Conditions

To achieve more precise results, we divided thermal sensation into four groups: Cold and hot, cool and warm, slightly cool and slightly warm, and neutral. In these conditions, as seen in Table 6, the relationships between working memory and thermal sensation of participants in the different thermal environments were significant all the time.

Table 6. Relationship Between Working Memory and Thermal Sensation in 6 Conditions

However, all relationships were significant in examining the effect of thermal sensation reported by individuals on their working memory (Table 6). This shows that humans’ thermal sensation is not completely consistent with ambient temperatures and working memory has a more significant relationship with thermal sensation than ambient temperature. Building heating and cooling systems with fixed and predetermined temperature settings do not have the required efficiency and do not lead to high satisfaction and the best work efficiency for space users. Therefore, systems with fixed, predetermined settings for controlling environmental temperature may not have the required efficiency. A flexible thermal environment can have better consequences for its occupants. Recent research has a great deal of emphasis on user-based systems. Adjustment of a set point based on occupants’ feedback, using personal equipment to create thermal comfort, and using physiological data of residents can be the most efficient approaches to reach the best cognitive performance with an emphasis on the occupants. Therefore, many approaches have been proposed for station-oriented systems. The use of personal equipment that creates a microclimate next to people, such as heated and cooled chairs (26), floor fans (27), and ceiling fans (28), can increase the temperature range around the person from 15°C to 30°C (29), allowing people to change the thermal environment to the condition with appropriate thermal sensation for them.

Copyright © 2022, Journal of Archives in Military Medicine. This is an open-access article distributed under the terms of the Creative Commons Attribution-NonCommercial 4.0 International License (http://creativecommons.org/licenses/by-nc/4.0/) which permits copy and redistribute the material just in noncommercial usages, provided the original work is properly cited.
download pdf 332.45 KB Get Permission (article level) Import into EndNote Import into BibTex
Number of Comments: 0