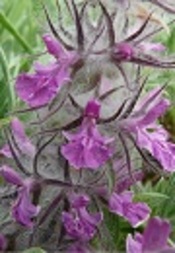 The Evaluation of Stachys lavandulifolia Leave Extracts on Cysts of G. Lamblia, in Vitro

Diarrheal disease is one of the most common problems that affected deployed military personnel during operations and maneuvers. Giardia (G.) lamblia is one of the causes of parasitic diarrhea in humans. There are very few therapeutics agents with unpleasant adverse effects available for treating giardiasis. Stachys lavandulifolia with polyphenolic structure is considered as an antimicrobial agent. In this study we evaluated the in vitro inhibitory activity of Stachys lavandulifolia leaves on cysts of G. lamblia.

Stachys lavandulifolia leaves, as a safe herbal medicine could be confirmed for anti giardial activity.

Giardia lamblia, a microaerophilic, binucleated flagellar protozoan, is a world-wide cause of intestinal infection that results in severe and explosive diarrhoea. G. lamblia is considered as the most commonly detected intestinal parasite in humans in both developing and developed countries (1). About 200 million people have symptomatic giardiasis and 2 million cases of symptomatic giardiasis were reported in Asia, Africa, and Latin America; about 500,000 new cases are reported annually (2, 3).

G. lamblia has been a major cause of traveler's diarrhea. According to studies, diarrheal disease is considered one of the most common problems throughout the world, especially in deployed military personnel during operation and maneuvers. Diarrhea leads to the inability of military personnel and to reduce the combat capability of the military units consequently (4-6). Therefore, diagnosis and treatment of the disease agents is necessary.

Manifestation of giardiasis in humans may range from asymptomatic, mild-to-moderate symptoms, to severe occurrences of inadequate absorption, gastrointestinal disorder, or allergic disease (7). Several treatments for giardiasis have been developed. Tinidazole, metronidazole, furazolidone, and quinacrine are the list of current medical diagnosis and treatment manuals, which display success rates ranging from 65% to 90% depending on the drug and on the dose administered to the patient (8).

Due to the side effects and the resistance to synthetic drugs, the use of traditional medicine is very common among the Iranian people (9). The genus Stachys is belonging to family Labiatae and includes many species that grow in the wild. Stachys lavandulifolia (S. lavandulifolia), one of the species of Stachys, was distributed in the north and west of Iran (Azerbaijan, Gilan, Golestan, Khorasan, Mazandaran, and Tehran) (10). S. lavandulifolia, with aromatic structure, includes the flavonoids, terpenoids, and phenyl ethanoids (11). S. lavandulifolia is locally known as Mountain Tea and as a traditional medicine that is used for headaches, neuralgia, nervous conditions, treating wounds, skin inflammation and as tonic at dyspepsia, astringent, and anti diarrheal in Iran (11).

100 g of powder was extracted by the soxhelation process using 200 mL of distilled water for 24 hours at room temperature. The extract was concentrated after evaporating the water under vacuum at a temperature of 40°C. The remained water extract was freeze-dried and the obtained dried extract powder was 12.5 g.

The leaves of S. lavandulifolia were dried. The leaves were pulverized in a grinding mill and a total amount of 100 g of powder was soxhelated with n-hexane for 24 hours at room temperature. The extract was dried after evaporating the solvent under vacuum at a temperature of 40°C. Then-hexane extract was freeze-dried. The obtained dried extract powder was 13 g.

G. lambia cysts were isolated from stool samples by a highly purified cyst suspension with a simplified sucrose gradient method. A total of 18 stool samples were fragmented in normal saline and filtered through a 300 µrn filter. Three mL of stool suspension were layered on 3 mL of 0.85 Msucrose and centrifuged at 600 g for 10 minutes at 4°C. Aspirated the cysts with a Pasteur pipette at the sucrose-water interface and washed 3 times with normal saline. Washed cysts were carefully added to the top of a discontinuous density gradient, consisting of 2, 3 mL layers of 0.85 M and 0.4 M sucrose. After centrifugation, cysts concentrated at the 0.85 - 0.4 M sucrose interface were collected and washed again and then stored at 4°C for future uses.

Four different concentrations (1, 10, 50 and 100 mg mL-1) of the watery extract and n-hexane extract of S. lavandulifolia were used for 1, 5, and 30 minutes, as well as 1, 3, and 6 hours. A total of 2 mL of each solution was placed in test tubes, then 10,000 washed cysts were added. The contents of the tubes were gently mixed. The tubes were then incubated at 37°C for 1, 5, and 30 minutes, as well as 1, 3, and 6 hours. At the end of each incubation time, the upper phase was carefully removed. A total of 2 mL of 0.1% eosin stain was then added to the remaining settled cysts and mixed slightly. The cysts were then smeared on a glass slide, covered with a cover glass, and examined under a light microscope. The percentages of dead cysts were determined by counting 1000 cysts. Non treated cysts were considered as a control group in each experiment. Triplicate trials were performed for each experiment.

The viability of the cysts was detected by 0.1% Eosin as a vital dye under a light microscope. The cysts with no absorbed dye were considered potentially viable and otherwise, they were recorded as dead.

Statistical analysis was directed by a one-way ANOVA (analysis of variance) considering a level of significance of 95% (P < 0.05), with SPSS- 18 software.

The anti giardial activity of watery and n-hexane extract of S. lavandulifolia is shown in Tables 1 and 2. Both the watery and n-hexane extracts of S. lavandulifolia showed significant ability to reduction of G. lambia cysts in comparison to the control group (P < 0.05). No significant reduction was observed in incubation at 1, 10, 50, and 100 mg/mL concentration after 1, 5, and 30 minutes. The Effect of Watery and N-Hexane Extract of S. lavandulifolia on G. lamblia Cyst in Vitro

Giardiasis is the most prevalent protozoal infection in most sites of the world. Clinical signs of this disease are ranged from asymptomatic to severe manifestation (19). The current treatments of the giardiasis are either one of the family of nitroimidazoles (usually metronidazole), nitrofurans, quinacrine, or paromomycin (20). Increased side effects and resistance of the parasite to these synthetic and semi-synthetic agents in the treatment of giardiasis make it necessary to find new, safe, and effective therapeutic agents (21). Until yet, metronidazole, with a wide variety of adverse drug reactions is included in selected therapeutic regimes (22). Therefore, some medicinal herbs with therapeutic effects could be considered as a drug of choice for treatment of G. lambia infection (23-25).

Several investigations have indicated that extract of folklore plants with phenolic consistent shows great anti giardial effects (29, 30). Some constituents have been isolated from S. lavandulifolia, mainly flavonoids with high antibacterial, antifungal, and anti parasital characteristics (10, 13, 17). N-hexane extract of S. lavandulifolia had higher activity in vitro on G. lambia cysts rather than watery extract. It is important to point out which one of the extracts displayed acceptable anti giardial activity with mortality rates ranging from 93 to 100% at 100 mg/ml after 6 hours.

The results of this study indicated that S. lavanfolia’s giardiacidal activities attributed to the phenolic group, present in its extract. These phenolic and flavonoid compounds exist in S. lavandulifolia are rich in phenolic ring-associated hydroxyl groups. The hydroxyl groups donate hydrogen atoms to link to a negative charged microbial plasma membrane, promote the leakage of intracellular constituent, and disruption of cell membrane. Due to the S. lavandulifolia’s anti parasital properties, it could be suggested as a helpful agent for the parasitic diseases. In Conclusion, in our study, S. lavandulifolia revealed an acceptable inhibitory activity against lambia cysts. N-hexan extract from S. lavandulifolia had higher anti protozoal activity on growth of G. lambia cysts. Finding further studies are required of Stachys lavandulifolia to evaluate its parasiticidal activity against other parasitic infection.

We thank all of those who helped us conduct this project.

Copyright © 2017, Journal of Archives in Military Medicine. This is an open-access article distributed under the terms of the Creative Commons Attribution-NonCommercial 4.0 International License (http://creativecommons.org/licenses/by-nc/4.0/) which permits copy and redistribute the material just in noncommercial usages, provided the original work is properly cited.
download pdf 517.27 KB Get Permission (article level) Import into EndNote Import into BibTex
Number of Comments: 0