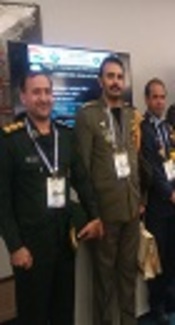 The first international congress of military medicine and pharmacy was held in July 1921, in Brussels, Belgium. The international committee on military medicine (ICMM) is an international and intergovernmental organization constituted by more than 100 States including I. R. Iran (1). The 42nd world congress of the ICMM was held at Vigyan Bhawan, New Delhi, India, from 19th to 24th November 2017 and delegates from all over the world met in India. The congress was hosted by the armed forces medical services, ministry of defence, India. The congress had simultaneous scientific sessions, poster presentations, roundtables, panel discussions, and workshops encompassing the broad themes (2). Iranian researchers of AJA University of Medical Sciences attended to the 42nd World Congress of ICMM and presented their scientific papers in the field of military medicine in the scientific sessions, poster presentations, roundtables, and panel discussions (Figure 1). The contribution of Iranian researchers of AJA University of Medical Sciences in the congress was as follows:

A lecture was presented by Dr. Zahra Farsi (Figure 2) on 21st Nov 2017 titled “Experiences of health care providers in the Iran-Iraq war: a content analysis study”. Oral presentation by Dr. Zahra Farsi in the 42nd World Congress of ICMM Oral presentation by Dr. Bita Rohani in the 42nd World Congress of ICMM Poster presentation by Dr. Amir Khoshvaghti in the 42nd World Congress of ICMM

A poster was presented by Dr. Sepehr Ebrahimi and Mohammad Ali Momeni (Figure 6) on 21st Nov 2017 titled “Triage in nuclear and chemical wars: A systematic review”. The closing Ceremony of the 42nd World Congress of ICMM

The author would like to thank all of the participants in this study.

Copyright © 2017, Journal of Archives in Military Medicine. This is an open-access article distributed under the terms of the Creative Commons Attribution-NonCommercial 4.0 International License (http://creativecommons.org/licenses/by-nc/4.0/) which permits copy and redistribute the material just in noncommercial usages, provided the original work is properly cited.
download pdf 11.94 MB Get Permission (article level) Import into EndNote Import into BibTex
Number of Comments: 0