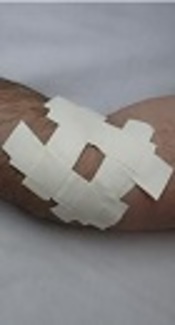 Tennis elbow (TE) is a common strain injury or microtrauma that causes sore and tender around the outside of the elbow. Using orthotic devices is one way for rehabilitating this condition.

The aim of this study was to investigate the immediate effects of taping technique (TT) and counterforce brace (CB) on hand grip strength and pain in the patients with tennis elbow.

In an experimental study with pre-test and post-test stages, 29 subjects with TT on their dominant arm were recruited and randomly divided into two groups: TT group (15 subjects) and CB group (14 subjects). The outcomes of the measurement consisted of pain in the lateral aspect of the elbow, as well as grip strength of hand before and 30 minutes after application of TT in one group and CB in another group. The visual analog scale (VAS) was used to assess pain and dynamometer was also utilized to evaluate grip strength.

According to these findings, the improvement of grip strength was not different between the two methods. However, it seems that TT was more effective than CB in the reduction of pain of lateral aspect related to the elbow in these patients.

Tennis elbow (TE) is a condition caused by inflammation of the tendons on the outer bony prominence (lateral epicondyle) of the elbow. This painful condition causes soreness and muscle fatigue in the elbow (1, 2). TE is a classic repetitive strain injury (RSI) with prevalence 1.3% among those between 30 and 64 years of age but is equally distributed between men and women (3, 4). Excessive constant gripping or squeezing on dominant upper extremity can cause TE (5, 6). TE is believed to be a degenerative process, which stems from repetitive microtrauma. Typically, samples from the affected tissue demonstrate hyperplasia at the extensor carpi radialis brevis (ECRB) region (7). Initially, the majority of subjects diagnosed with TE can be effectively managed with conservative treatment, oral medication, and rehabilitation (8). It is usually a self-limited process in which up to 90% of the subjects will recover by one year without surgical intervention (5, 7). The most effective of the interventions that occupational and physical therapists reported were comprised of resting from activities, graded-home exercise program (9), use of orthotics devices, and rehabilitation programs, including stretching (10), friction massage (11), thermal modalities, and muscles strength (8, 12). One of the new methods in the rehabilitation of lateral epicondylitis is the use of taping (10, 13, 14). Taping technique (TT) is used as an alternative to musculoskeletal injuries to support the fascia, muscles, and joints; however, TT used for lateral epicondylitis facilitates unrestricted range of motion (ROM) and is also hypothesized to reduce the time for recovery from injury by decreasing pain and inflammation (15). Counterforce brace (CB) is one of the other methods in the rehabilitation of lateral epicondylitis (14, 16). The CB used for tennis elbow reduces tension on the tendons at their insertion point to the bone by transferring force farther down the arm. Thereby, CB reduces painful inhibition and allows the patient to contract more forcefully (17). Patients with lateral epicondylitis frequently receive TT and CB from physical and occupational therapists to reduce the pain and improve grip performance (18, 19). However, the comparison between these two methods has not yet been done.

Twenty-nine subjects with tennis elbow on their dominant arm were selected from a population of subjects with lateral epicondylitis who had been followed-up at physical medicine and rehabilitation clinic in Baqiyatallah Hospital. Written informed consent was obtained from all patients, including agreement of the patients to participate as volunteers. Inclusion criteria were as follow: (1) present of pain on the outer edge of the elbow with gripping activities, (2) limited wrist or finger extension or passive stretch of wrist extensor muscles, (3) one hand involved, (4) Three weeks passed from the onset of the symptoms, and (5) the subjects who had not been previously treated. Exclusion criteria included: (1) history of surgery on the forearm of dominant upper extremity within the last year, (2) limitation of range of motion in the forearm, (3) history of rheumatoid disease or neurologic impairment, (4) allergy to adhesive tapes, and (5) subjects with radiculopathy. All subjects were treated by occupational therapists with at least 8 years of experience. The treatment was conducted in one clinic for all participants in the two groups.

In this study, participants were randomly divided into two experimental groups. The first group contained 14 subjects who were treated by CB, and another one contained 15 subjects who had received TT. In our research, the measured parameters consisted of elbow pain against resisted wrist or finger extension, grip strength of hand and wrist extension muscle force that evaluated affected arms before application of TT and CB in two groups. The parameters were assessed again 30 minutes after the interventions in two groups. In this study, grip strength was defined as the amount of grip force generated with an isometric contraction prior to the onset of pain. It was measured using a hydraulic hand dynamometer (Jamar) in pounds of force with the patient was in sitting position on the chair and the upper limb was in a standardized position across all trials as recommended in a study of the relationship of elbow position and grip strength (20, 21). Visual analog scale (VAS) was used to measure the level of pain experienced on the dominant elbow before and following the intervention. The subjects were shown a card depicting the scale from zero to one hundred millimeters. In this scale, zero meant experiencing no pain at all and 100 meant the maximum level of the pain (22, 23). In the present study, we used validated hand-held dynamometer for measurement of wrist extension muscles force (2). Ethical approval was received to this study and informed written consents were signed by all subjects, including agreement of the patients to participate as volunteers; so they could refuse to participate or withdraw from the study at any time.

For taping of the lateral aspect of the elbow, we used non-elastic and adhesive taping. Tapes that used for the present study included four pieces of approximately 8 cm to 10 cm length and3.8 cm width. In this study, the patients were in the sitting position; meanwhile, taping was applied in the lateral side of the elbow and the elbow was in a slightly flexed position. Tapes will be applied on the skin distally to proximally in a diamond shape. The strips overlapped at their ends and were reinforced with an additional four non-elastic tape strips (Figure 1) (13, 14).

In our study, the counterforce brace was made of non-elastic materials with hard pad over and was applied 2 cm distal to the lateral epicondyle of dominant upper extremity over the extensor carpi radialis longus and brevis (Figure 2) (24). Figure 2. Non-elastic counterforce brace (CB) that used in this study

Statistical analysis was performed with SPSS software (version 18.0). The normal distribution of variables was assessed with the Kolmogorov-Smirnov test. For comparison of scores between TT and CB groups, we used independent sample t test. In addition, a paired-sample t test was used to compare pre- and post-intervention mean scores for each group to determine whether there was any significant difference. P-values less than 0.05 were considered statistically significant.

Twenty-nine patients with lateral epicondylitis were included in the study and decided into two groups. No significant differences were observed among the groups regarding variable. Therefore, the groups seemed to be homogenous at baseline. Data on demographic characteristics, including sex, dominant hand, and age are listed in Table 1. Mean ± SD duration of their lateral epicondylalgia condition in TT group was 6.4 ± 1.3 weeks and in CB group was 8.1 ± 1.1 weeks. Pre- and post-treatment mean, standard deviation, as well as minimum and maximum scores for variables are given in Table 2. The independent sample t test showed statistically significant improvements in pain following taping compared with counterforce brace (P = 0.004). However, there was no significant difference in grip strength (P = 0.06) and wrist extension force between two groups at post-intervention (P = 0.88) (Table 3).

Table 1. Characteristics of the Samples
Table 2. Pain, Grip Strength, and Wrist Extension Force at Baseline and After Intervention

Table 3. Mean of Changes for All Dependent Variablesa

a Values are expressed as means ± SD.

The paired t test used to compare the values pre- and post-intervention in the taping technique group, revealed statistically significant changes in scores of pain, grip strength, and wrist extension force (P > 0.05). Also, the comparison between the values before- and after intervention in counterforce brace group showed that there were significant changes in scores of the pain (P = 0.006), grip strength (P = 0.000) and wrist extension force (P = 0.001) (Table 4).

Table 4. Pre- and Post-Scores of the Variables Between the TT and CB Groupsa

a Values are expressed as means ± SD.

Copyright © 2019, Journal of Archives in Military Medicine. This is an open-access article distributed under the terms of the Creative Commons Attribution-NonCommercial 4.0 International License (http://creativecommons.org/licenses/by-nc/4.0/) which permits copy and redistribute the material just in noncommercial usages, provided the original work is properly cited.
COMMENTS