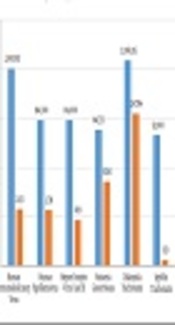 A Retrospective Study Evaluating Sexually Transmitted Diseases in Military Personnel During Deployment. Is There a Need to Change Current Practices?

Historically, the US Military has made significant contributions toward the treatment and prevention of common sexually transmitted infections (STI) including syphilis, gonorrhea, and human immunodeficiency virus. Although there have been numerous studies evaluating the prevalence of STIs among service members, there is a lack in studies that evaluate the prevalence of STIs acquired by U.S. military personnel during the deployment period.

The objective of this study is to evaluate the rates of sexually transmitted infections (STI) among U.S. military personnel within the deployment period to determine if further studies are needed to evaluate its significance on public health.

Although there is insufficient data regarding pre-deployment versus post-deployment rates of sexually transmitted infections, the available data we analyzed regarding post-deployment STI suggests that it may be beneficial to screen service members for common STIs immediately upon return from deployment. Individuals who are predisposed to participating in high risk sexual behavior pose a higher risk of returning home with a sexually transmitted infection. Therefore, a screening questionnaire administered upon return from deployment to stratify high risk sexual behavior would be beneficial in identifying individuals that need to be tested for STIs. Deployed soldiers returning home with STIs have the potential to infect their spouses/significant others. In addition, the risk of untreated STIs has the potential to pose a public health issue, especially when considering that overseas deployed soldiers may contract strains of viruses or bacteria that have the potential to develop resistance to current standard of treatment within the United States. Additional studies are needed to further evaluate the prevalence of sexually transmitted infections among the post-deployment group.

Stressors related to different points in the deployment cycle have been shown to affect behavior patterns among service members (2). Increased stress in personal and/or family life, in addition to psychological distress faced by service members, has an adverse influence on the number of sexual partners. Those who report a higher level of stress are not only more likely to have an increase in the number sexual partners, but also engage in high-risk sexual behaviors such as lack of condom use (3). Given that previous studies have demonstrated that deployment cycles have an influence on stress levels and psychological distress, along with prevalence of higher rates of STIs within the military, it is imperative to evaluate the effect of deployment on sexually transmitted infections among active duty personnel in the U.S military.

Although prevalence of STI’s among military personnel have been reported in the past, there is a lack of studies evaluating the prevalence of STIs during the deployment period. The purpose of this study is to determine the rates of the most common sexually transmitted infections among deployed U.S military personnel to determine whether further studies are necessary to evaluate the impact of deployment on sexually transmitted infections and the threat it may pose to public health.

We performed a literature review searching Medline, PubMed, and Google Scholar for publications related to sexually transmitted infections among U.S. military service men and women published between the years 2005 - 2018. In addition to human immunodeficiency virus (HIV), which carries long-term morbidity and mortality, the five most prevalent sexually transmitted infections reported in the September 2017 issue of Medical Surveillance Monthly Report were considered for this study (3). The most prevalent STIs and the method used to diagnose given STI in the publications used for this study are depicted in Table 1. Our study population consisted of active duty military personnel who tested positive for the most common STIs. This group was further categorized into two different subgroups. The first subgroup included all service members who tested positive for a given STI during deployment (departure period). The second subgroup included service members who tested positive during the period up to 180 days after returning from deployment. The data was independently extracted by two observers and collected into a single database prior to analysis. Data retrieval is depicted as a flow diagram following PRISMA guidelines in Figure 1.

Table 1. Most Common Sexually Transmitted Infections in the U.S. Military Active Duty Service Members and the Method of Diagnosis Used in Evaluated Studies Flow diagram of documents retreival based on PRISMA guideline

The total sample size from our study included 4984014 active duty military personnel. From the total sample size, 594961 (12%) subjects were not separated by gender in the publication used for our data analysis. The remainder 4389053 (88%) were separated into males and females; 3744811 males (85%) and 644242 females (15%). Military personnel with a prior history of deployment was comprised of 1321706 (26.5%) individuals. From the total sample size, 265886 (5.3%) of service members had a positive STI diagnosis. Figure 2 depicts active duty personnel that tested positive for a given STI. Figure 3 shows a further breakdown of active duty personnel with a positive STI by gender. The publications evaluated for this study utilized various diagnostic methods for different STIs, including nucleic acid amplification test, theater medical data store, retrospective medical records review, HIV serology, ELISA, and western blot (Table 1). Among those with a positive STI diagnosis, 9083 (3.47%) were diagnosed while they were deployed, whereas 14121 (5.3%) were diagnosed in the post-deployment period (within 180 days of returning home). Figure 4 summarizes the findings from this paper that depicts the number of active duty military personnel who tested positive for STI with a further breakdown of positive diagnosis during deployment and period after deployment. Due to lack of published data, we are unable to determine whether the post-deployment group contracted the STI upon returning home or during their deployment period and were not evaluated due to being asymptomatic. Active duty personnel with a positive STI by gender

Table 2 is a summary of all the data that was observed, including data that was excluded from our final analysis, as well as the year of publication and specific data collected from each publication.

Table 2. Summary of the Data Collected

Due to lack of adequate data available and the lack screening for STIs while service members are deployed, we cannot conclude whether rates of sexually transmitted infections are higher during deployment. Furthermore, we are unable to determine whether a specific branch of the military has higher rates of STIs based on the data we were able to collect. Studies suggest that the deployment cycle is often associated with increased stress and psychological distress, which tends to increase risk taking behavior, including sexual promiscuity (2). There may be a relationship between HIV infections and deployment due to the findings of acute HIV infection close in proximity to pre-deployment period (7). It has also been noted that prevalence of STI increased among service members deployed to Iraq and Afghanistan between 2005 - 2009 (8). However, we currently do not have any studies evaluating that relationship with an adequate control group.

Additionally, the overall prevalence of STI is noted to increase throughout an individual’s time served in the military, which is appears to be dichotomous to the well-known finding that younger military populations tend to have a higher rate of STIs. The increase in prevalence for STIs shows a significant rise about eight years of service (9). This is problematic since older military populations are deemed low-risk groups for STIs and are excluded from routine screening, especially women over 25 years old who no longer receive routine screening for chlamydia in the military. The finding suggesting that risk for STI acquisition is ongoing in the military with length of service warrants investigation to determine when service members are most likely to get an STI.

The effect of sexually transmitted infections on productivity among soldiers is also of concern. One study noted that five soldiers had to terminate deployment early to be evaluated for lymphadenopathy secondary to HIV, while two additional soldiers contracted an STI in addition to HIV and had to terminate deployment early (7). Another study suggests that at least 25% of HIV-positive service members leave the military within the first 16 months after diagnosis (10).

Although we were able to gather some data for prevalence of STI among deployed military personnel, the majority of publications evaluated for this study pertained to rates of STI among active duty service members without specifying their deployment status. These studies largely agree that high risk sexual behavior increases the risk for STI. High risk sexual behavior is described as engaging in unprotected sexual intercourse with same sex and opposite sex, binge drinking, and illicit substance use. Individuals with high risk behavior were also noted to have increased number of sexual partners and are at increased risk for STIs. In addition, women facing increased stress from intimate and family relationships were also associated with having increased number of sexual partners (17). Esposito-Smythers et al. found that stressors related to different points in the deployment cycle have been shown to affect behavior patterns among service members. It is also worth noting that individuals who are deployed are more likely to engage in risk-taking behavior (2). Considering the deployment may lead to an increased propensity for these behaviors, it is worth exploring the prevalence of STIs within this group.

There are numerous studies published evaluating the rates of STI among active duty personnel in the U.S. military. However, there is not enough data published evaluating the prevalence of STIs among deployed soldiers. The limited data we found suggests that the prevalence of STI among deployed soldiers is significant enough to warrant further studies.

Currently, the military only screens for HIV prior to deployment and there are no additional screenings while soldiers are deployed. The military currently does not have a procedure in place to identify individuals engaging in high-risk sexual behavior to administer appropriate screening.

We recommend U.S. military service members fill out a questionnaire during deployment to evaluate high-risk behavior to determine the need for additional screening. Self-reporting of two to four sexual partners among both genders within the past 12 months is documented to be a significant predictor of STI. Women and men with five or more reported partners had five and six times the odds, respectively, of reporting an STI. It may also be prudent to administer routine periodic STI screening for all enlisted soldiers under 25 years old given this is the group with highest rates of STIs. The benefits of screening include earlier detection, which has shown to decrease morbidity and rates of transmission among other service members (12). Additionally, given that most military servicemen acquired their last STI from another service member or their spouse it may be beneficial to implement expedited partner treatment (13). Due to the lack of data available on prevalence of STI among deployed U.S. military servicemen, further studies are recommended in order to implement adequate screening methods.

Due to the lack of available data on rates of STI among deployed U.S. military personnel, this was one of the most significant restrictions to this study. This could be because the military does not perform routine screens for STIs. In addition, this study is also limited by the inability to track soldiers who may avoid military clinics and prefer to seek treatment outside military facilities, which either exaggerate or dilute our findings.

Copyright © 2019, Journal of Archives in Military Medicine. This is an open-access article distributed under the terms of the Creative Commons Attribution-NonCommercial 4.0 International License (http://creativecommons.org/licenses/by-nc/4.0/) which permits copy and redistribute the material just in noncommercial usages, provided the original work is properly cited.
download pdf 126.87 KB Abstract XML Get Permission (article level) Import into EndNote Import into BibTex
Number of Comments: 0