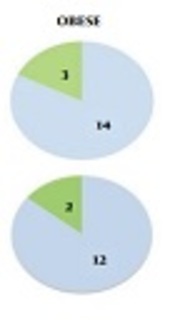 The health promotion efficacy of a dietary regimen and physical activity guidance program applied to the São Paulo state military ppre-obese policemen exhibitedolice working in São Paulo city was investigated. The guidance program consisted of the delivery of a 10-minute talk on healthy nutritional habits and the beneficial effects of a regular physical activity practice for each volunteer personally. The physical fitness parameters related to the health of the volunteers were evaluated before and eight weeks after the interventional program. The study included 58 policemen working in São Paulo city, aged 34.9 ± 0.8 years (mean ± SEM). The application of the guidance program could decrease body fat percentage (BFP) (by 5.7%), abdominal circumference (ABC) (by 1.1%), and systolic blood pressure (SBP) (by 2.4%), and increase flexibility (FLEX) (by 8.8%) and abdominal resistance (ABR) (by 5.2%). A change in physical activity behavior was also reported. Increases in the number of volunteers in very active (VA) (3.45%), active (ACT) (10.35%), and irregular active A (IRA) (5.17%) groups, and reductions in irregular active B (IRB) (13.79%) and sedentary (SED) (5.17%) groups were found. The policemen were classified (before-after) as obese (29.3% - 24.1%) and pre-obese (39.7% - 43.1%). Foty-three percent of pre-obese policemen exhibited more daily physical activity after the guidance program implementation. The guidance program was effective in increasing the adherence of pre-obese policemen to the physical activity practice, reduced the percentage of body fat and abdominal circumference, and improved lower limbs flexibility and abdominal muscle resistance.

The sedentary lifestyle causes overweight and obesity and consequently, increases the prevalence of chronic diseases (1, 2). The stress also increases the risk of the onset of chronic diseases (3). The exhaustive working regime and sleep restriction lead to coronary heart diseases and metabolic syndrome (3, 4). In opposition, the maintenance of physical fitness (appropriate body fat composition, cardiac and neuromuscular capacity, normal blood pressure, strength, endurance, and flexibility), combined with healthy dietary habits, prevents chronic disorders such as obesity, diabetes, cardiovascular diseases, and hypertension in the civil population (2, 5, 6). This is particularly important for the Military Police Force that requires high physical performance for proper working.

Health promotion programs with a recommendation to change lifestyle, especially in diet composition and physical activity practices, can reduce morbidity and mortality associated with chronic degenerative diseases (5-7). Interventions with telephone talking sessions and intensive counseling on lifestyle guidance can reduce body weight and body mass index and promote a change of the dietary habits in adults (2, 6-8). The frequency and duration of the physical activity practice were also increased, reinforcing the assumption that a single guideline program can be effective in health promotion in the civil population (2, 4, 7, 8). Despite these observations, the efficacy of a single health promotion guideline program has not been tested in the military police yet. It is very likely that a guidance program on healthy habits might be effective to reach the expected achievements in these professionals. In fact, the discipline and hierarchy are highlighted in the military police working activities.

The military police of São Paulo city has approximately 88000 police officers. Tactical force, street patrol, school patrol, and motorcycle/bicycle patrol are the main working activities. They work for long and constant periods, impeding the practice of physical activity and adequate eating habits during working hours. The police officers do need regular exercise physical training and healthy nutritional habits in order to be fit and healthy to successfully complete the daily working tasks.

The study was performed on 72 out of a total of 84 policemen (85.7%) that work in the tactical force policing of the east area of São Paulo city (with a very poor population), São Paulo state, Brazil. The participants (n = 14) with any missing data were excluded from the analysis, resulting in a final sample of 58 military police volunteers with the age range of 20 to 54 years, mean age of 34.9 ± 0.8 years, and mean height of 176.0 ± 0.01 cm (means ± SEM). The Ethics Committee of the Cruzeiro do Sul University, São Paulo, Brazil (Protocol EC/ UCS-136/2011) approved the study. The volunteers answered the anamnesis and the IPAQ short form. The individualized classification of physical activity level was defined as follows: very active who performed vigorous activities ≥ 5 days per week and ≥ 30 minutes per session or ≥ 3 days per week and ≥ 20 minutes per session in addition to performing moderate activity and/or walking ≥ 5 days per week and ≥ 30 minutes per session; active who performed vigorous activities ≥ 3 days per week and ≥ 20 minutes per session or moderate activity or walking ≥ 5 days per week and ≥ 30 minutes per session; active irregularly A who achieved at least one of the rating criteria regarding the frequency of 5 days per week or the activity duration of 150 minutes per week; active irregularly B who did not perform any of the recommendation criteria in frequency or duration. Volunteers classified as very active and active were considered active, whereas those classified as active irregularly A, B, and sedentary were considered inactive (9, 10). Systolic blood pressure (SBP) and diastolic blood pressure (DBP) were measured using an analogic sphygmomanometer (11). The height and body mass were obtained using a vertical stadiometer and a digital platform scale, respectively. The waist circumference (WC), hip circumference (HC), and abdominal circumference (ABC) were measured using an anthropometric inelastic tape measure. The anthropometric parameters were used for the calculation of the body mass index (BMI) and the waist-hip ratio (WHR) (12). The evaluations of body density and percentage of total fat were associated with abdominal (AB), thigh (CX), and chest (PE) measurements using a compass of scientific LANGE®. The flexibility in the lower hip and limbs was evaluated by applying the test of sit and reach in Wells Bank (13). The muscular endurance was determined in the upper limbs using the test (ULS) of maximum repetitions front support (arm flexion), and through the test of abdominal maximum repetitions in one minute (ABR) (14).

The intervention consisted of a single session of 10 minutes talk on the guidance program for each volunteer personally at the working place. The talk on healthy eating habits was based on the food guide for the Brazilian population and the ten steps to healthy diets with seven dietary guidelines for health promotion by preventing bad dietary habits (15). The regular physical activity practice followed the São Paulo Move Program (Agita São Paulo) recommendation, which consists in encouraging the practice of physical activity for at least 30 minutes per day, continuously or divided into two sessions of 15 minutes each, five days a week. The American College of Sports Medicine proposed these protocols (16). Eight weeks after the single and individualized talking session, the volunteers were reassessed.

The results were analyzed using the t student test for paired measures with a significance level of 95% (P < 0.05). The statistical analysis was performed using the Graph Pad Prism 6 software, San Diego, USA. The results are presented as means ± standard errors of the mean (SEM).

a Values are expressed as means ± SEM (standard errors) unless otherwise indicated.

The São Paulo city military policemen are daily exposed to high-stress conditions, air pollution, and sleep restriction. These are risk factors for the development of chronic diseases (3, 17, 18). Merino reported that the prevalence of death due to cardiovascular diseases is 2 - 3 times higher in the military police of São Paulo when compared with the resident civilian population (17).

We reported in this study that a single individual session of 10 minutes of personal talking on a health promotion program reduced cardiovascular disease risk factors including the abdominal and waist circumferences. Similar results were described in a study in which healthy diet and regular physical exercise practice recommendations were delivered for truck and bus drivers, civilians, during 12 months (7).

The intervention was effective to reduce the percentage of total body fat and led to a decrease in the waist and abdominal circumference of the policemen. Studies suggest that increased body fat percentage gain is significantly associated with decreased prevalence of overall fitness in police officers (18). In addition, the accumulation of fat in the central region of the body is a well-known risk factor for the development of metabolic diseases (18, 19). Excessive total body fat also contributes to the development of a chronic systemic low-intensity inflammatory condition caused by the release of adipokines and pro-inflammatory cytokines by adipocytes and adipose tissue-infiltrating macrophages (19). The risk factors related to military police health were investigated by assessing the prevalence of overweight and obesity. We found that 69% of the volunteers were overweight or obese. This proportion is higher than that reported for the Brazilian civilian population (61.1%) (20). Although there was a reduction of BFP, BMI did not change. This may be explained by the fact that the BMI calculation uses total body weight and does not differentiate the muscle mass weight from the body fat. We reported that overweight volunteers responded better to the intervention and became physically active even in a short period of study. This may explain the increase in abdominal muscular endurance and flexibility and a decrease in SBP, body fat, abdominal circumference, and abdominal and waist ratio observed after the intervention.

As one limitation of the study, the diet assessment of the volunteers was not performed. This information would allow us to find out changes in the dietary habits because of the intervention. The daily working activities of the volunteers could be jeopardized by the evaluation routinely taking.

The guidance program on health promotion improved the healthy markers of physical fitness. The adherence to the program was more notable in the overweight policemen.

FAPESP, CNPq, and CAPES supported this study. The authors are grateful to the technical assistance by Rebeca dos Passos Costa and Emerson Vitório de Oliveira. The authors are very grateful to the constant support and encouragement of Professor Renato Padovese (Grupo Cruzeiro do Sul Educational) and São Paulo State Military Police Commander (Major Robson Silva Cruz of the Tactical Force of the 39th Metropolitan Battalion).

Copyright © 2019, Journal of Archives in Military Medicine. This is an open-access article distributed under the terms of the Creative Commons Attribution-NonCommercial 4.0 International License (http://creativecommons.org/licenses/by-nc/4.0/) which permits copy and redistribute the material just in noncommercial usages, provided the original work is properly cited.
download pdf 239.26 KB Abstract XML Get Permission (article level) Import into EndNote Import into BibTex
Number of Comments: 0