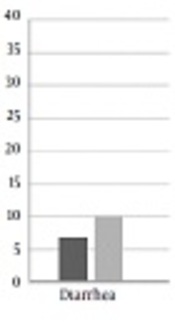 Evaluation of Blastocystis sp. Frequency in Referred Samples to Urban Laboratories: Is it a Potential Risk for Deployed Troops?

Given the relatively high prevalence and emphasis on the pathogenicity of Blastocystis sp., especially in immunocompromised patients and other at risked populations like military personnel, this study was carried out to investigate the prevalence of Blastocystis sp. in the city of Karaj during 2014 - 2015.

In this descriptive study, 2500 stool samples were screened for Blastocystis sp. using microscopically examinations and iodine-stained, wet-mount preparations and formalin-ether as a sedimentation method. Demographic information such as age, gender, and symptoms of patients, were recorded in the questionnaire. Three stool samples were collected from each patient in disposable plastic containers. Data were analyzed using chi-square, ANOVA, and t-test SPSS V. 24 software.

The use of appropriate diagnostic laboratory procedures in hospitals and medical centers can provide an effective and accurate diagnosis that will play an important role in the promotion of community health; considering some unspecific signs could help the health professionals to have correct diagnose.

Blastocystis sp. is one of the most important inhabitant protozoans in the large intestine of humans (patients with gastrointestinal symptoms, and healthy individuals). It is a polymorphic parasite whose size varies from 5 µ to 150 µ. In 1912, it was introduced as an inoffensive parasite; afterwards, studies showed that it was a commensal protozoan of the intestine, but according to the last categorization, it was situated in the stramenopiles group and fecal-oralisits main route of transmission (1-4). Blastocystis sp. has a global spread-out and it has been one of the most common parasites in parasitological assessments. The prevalence of this parasite in different areas of the world varies from 0.5% to 23% and possibly more in developing countries. The prevalence of this parasite has been reported, in Khorramabad 6.5%, in Tabriz as 17.26%, and in Tehran cities as 6.5% and 12.8% (5-8). The pathogenicity of this parasite is extremely important, especially in people with immunodeficiency. Some of the pathological and immunological studies demonstrate some pathogenicity; however, no intestinal symptoms were found. The role of Blastocystis as a pathogen is more significant. Healthy carriers play an important role in the transmission of disease.

The prevalence of Blastocystis is closely associated to the epidemiological and hygienic situation of the district. Deployed troops and other crowded populations due to the low quality of sanitary conditions are at risk. According to a Thai study, prevalence of Blastocystis sp. carriage in Thai army personnel was reported 44% based on smear test and formalin/ethyl acetate concentration techniques (9).

In recent years, military conflicts in tropical and subtropical areas could be related with risk for gastrointestinal protozoan infections, especially Blastocystis. In another study, prevalence of Blastocystis sp. was 15% in military personnel who participate in the Iraq and Afghanistan war (10). Moreover Diarrhea caused by intestinal parasites, including B. hominis, leads to the inability of army personnel and, consequently, reduced combat power of military forces in operations and maneuvers (11).

Most infections are asymptomatic; however, in some cases, maybe demonstrate signs such as: anorexia, fever, vomiting, abdominal pain, and diarrhea (4, 12-14).

Considering the slightly high prevalence of Blastocystis sp. in examined cases at parasitology laboratories and attributing many pathological signs to the above-mentioned protozoan in the recent years, and since no study has been conducted in Alborz province, the aim of the present study was to assess the prevalence rate of this parasite in cases referred to central laboratories of Alborz province during 2014 - 2015.

The current descriptive cross-sectional study with random sampling was carried out on cases referred to central laboratories of Alborz province during 2014 - 2015. The patients were asked to fill a questionnaire on their demographic characteristics. From each case, three stool samples were collected and accumulated in a plastic dish.

Some information consists of age and gender; symptoms of the present illness and date were recorded by filling a survey questionnaire by patients. The informed consent for participation in the study was obtained from each participant. Then, the samples were microscopically evaluated using normal saline and iodine solution preparations and formalin-ether procedure. Formalin-ether method was performed by parasite test kits. A 3.5 mL parasite test solution (formalin 10% + normal saline + ethyl acetate) was added and the sample was placed inside the kit and centrifuged for 1 min at 100 g speed and finally, the remaining fluid at the bottom of the kit was decanted and the sediment was transferred to the slide for microscopic examinations. The numbers of Blastocystis sp. cells in fecal materials were counted with a 40 × field microscope (15, 16).

Sampling was done from all referred and patients who used anti-parasitic diseases, those who did not want to participate were excluded from this study.

The data were statistically analyzed using SPSS V. 24 and by chi-square, ANOVA and t-test. P values < 0.05 and 0.001 were considered statistically significant.

Table 1. Frequency of Blastocystis in People Referring to the Laboratory

In the reported assessment of pathological signs of Blastocystis sp. in patients whose stool examination was positive (infected with Blastocystis sp.). Among 345 infected people, 115 (33.3%) patients showed clinical Symptoms (Table 1).

Among people with clinical symptoms; 37% had anorexia and were the highest and 7% had diarrhea, which was the lowest rate of clinical symptoms among those whose stool examination results were reported to be positive. Some of the people had simultaneously shown many signs, the most significant signs were diarrhea, vomiting/nausea, anorexia, flatulence and cramping as well as abdominal pain, respectively. There was no significant relationship between the symptoms of the disease in men and women (Figure 1).

Evaluation of Blastocystis sp. in sick people showed that the frequency of infection was mostly seen in people under the age of 10 (50%); no significant difference was seen between the infection with Blastocyst sp. and gender (P = 0.09).

Considering pathological signs noticed in patients infected with this parasite, it can cause many troubles to the society especially in kids due to the fact that its prevalence is much in underage children rather than elderly individuals; therefore, on time treatment of children is recommended. On the other hand, awareness of Blastocystis sp. and the use of concentrated solution of formalin-ether can increase the chance of noticing the parasite in a sample.

As this infection is related to hygiene, we can prevent the incidence of Blastocystis sp. by enhancing personal and public hygiene level. Due to the significant risk for zoonotic transmission, molecular techniques must be used to determine the route and source of infection (25-27).

Further research to evaluate the pathogenic potential of this organism is needed. To be protected from the disease, prevention, and control measures must be taken including education and personal hygiene and sanitation.

One of the limitations of the recent study was the lack of cooperation of many patients. Since each patient was sampled three times, many patients did not go for sampling.

The results of this study showed that Blastocystis hominis infection is one of the most common intestinal parasitic infections, and neglect of it can cause many problems for patients. Therefore, the use of appropriate diagnostic methods in the laboratories of hospitals and therapeutic centers can be effective in the correct and timely diagnosis; this will play an important role in promoting health and well-being in the community. In addition, due to the close relationship between the disease and environmental conditions, the disease can be a military threat to dormitory soldiers and needs to be continuously investigated in the densely populations.

We are deeply thankful of all those personalities who have helped us in this research project including Doctor Rohi, Nemone, Gowhar, and Shahid Beheshti laboratories. We would like to acknowledge the financial support of Mazandaran University of Medical Sciences, Sari, Iran [code:1291].

Copyright © 2019, Journal of Archives in Military Medicine. This is an open-access article distributed under the terms of the Creative Commons Attribution-NonCommercial 4.0 International License (http://creativecommons.org/licenses/by-nc/4.0/) which permits copy and redistribute the material just in noncommercial usages, provided the original work is properly cited.
download pdf 156.55 KB Get Permission (article level) Import into EndNote Import into BibTex
Number of Comments: 0