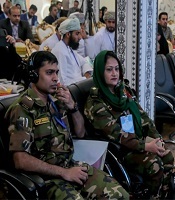 Letter to Editor: The First International Workshop on PTSD

Post-traumatic stress disorder (PTSD) is a significant disorder and serious problematic issue among civil and military populations. Mental health practitioners indicate that immediate actions for the management of trauma-related mental disorders are crucial for the prevention of PTS. Thirty years after the end of the unwanted war between Iran and Iraq (1980 - 1988), with many catastrophic events, now we have many veterans who are suffering from post-traumatic disorders such as anxiety disorder, major depressive disorders, and some types of psychosis and PTS. In other words, PTSD could continue years after ending wars. In a study in Iran, 24.0% of cases were compatible with PTSD diagnostic criteria 26 years after ending the war (1).

Apart from the veterans themselves, there are other victims in their families including their wives and children that have been suffering from the impact of their fathers’ problems, known as vicarious PTSD. On the other hand, we had many disasters in these years in Iran from man-made to natural disasters that have been followed by several cases of PTSD.

The AJA University of Medical Sciences in accordance with statuettes of the secretariat general of International Committee of Military Medicine (ICMM) organized this workshop on PTSD from 15 to 17 June 2019 at the Psychiatric Specialty Hospital of the Iranian Army (Figures 1 and 2). The Department of Psychiatry of AJA University of Medical Sciences with 40-year experience in several aspects of psychological distress and disorders organized this workshop with the collaboration of other well-known civil and military departments. The main topics of this program were as follows: PTSD cultural considerations and clinical manifestations, compensation or malingering in PTSD, new psychological treatments of PTSD (trauma-focused psychotherapy, exposure therapy, and eye movement desensitization and reprocessing (EMDR)). Furthermore, there was a section on psychological interventions in disasters in this workshop. After participation in several earthquakes and floods, the Iranian army mental health practitioners have earned enough experience to teach their achievement in this area.

Besides Iranian participants, there were audiences from 10 other countries. The workshop was held in English and Persian with simultaneous translation into English and Arabic. On the third day, there was a final discussion panel with the collaboration of international experts. Iranian and Iraqi psychiatrists, who engaged in the unwanted war 30 years ago, participated in this panel and shared their hard experiences, which was noticeable and had a great impact on audiences.

Ground Force Health organization, especially brigadier general Dr. Shahnam Baboli, psychologists in Baqiat’allah University of Medical Sciences, Ministry of Health and Medical Education, Iranian Psychiatric Association, Sadra Cognitive Defense Science Center, and Armed Forces of Social Security Organization, especially brigadier general Dr. Farshad Najafipour, had a wonderful collaboration with the AJA University of Medical Sciences in the arrangement of this meeting. This workshop was the first of a series of educational activities for the Asia-Pacific region of ICMM for 2019 and 2020 that are being arranged by the Iranian Committee of Military Medicine. We acknowledge the warm collaboration of other nations and international audiences. Commitment of international participants in the workshop

Copyright © 2019, Journal of Archives in Military Medicine. This is an open-access article distributed under the terms of the Creative Commons Attribution-NonCommercial 4.0 International License (http://creativecommons.org/licenses/by-nc/4.0/) which permits copy and redistribute the material just in noncommercial usages, provided the original work is properly cited.
download pdf 4.80 MB Get Permission (article level) Import into EndNote Import into BibTex
Number of Comments: 0