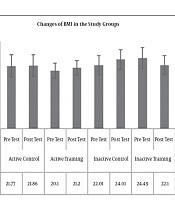 Owing to the decrease in the level of physical activity in today’s world, it seems that weight gain and fat mass are among the most important causes of non-alcoholic fatty liver disease. Studies have also reported the beneficial effects of regular and long-term aerobic exercise on disease prevention. Therefore, the present study aimed to investigate the effect of high-intensity interval training (HIIT) on serum levels of alanine aminotransferase (ALT) and aspartate aminotransferase (AST) in active and inactive women.

It seems that HIIT independently of weight changes and body mass index can decrease ALT in active and inactive women.

Regarding the importance of liver tissue in metabolism, this vital organ seems to have a large number of different enzymes. Nonetheless, given the importance of measuring the health and damage of this tissue in addition to increasing levels of lipid profile and BMI, the most important plasma enzymes that indicate damage to this tissue have been reported as alanine aminotransferase (ALT or SGPT) and aspartate aminotransferase (AST or SGOT) (4). Increased levels of these two markers along with elevated levels of low-density lipoproteins (LDL), very-low-density lipoproteins (VLDL), triglycerides (TG), cholesterol, and increased body fat mass (BMI) appear to indicate acute liver failure and hepatocellular carcinoma (5). However, 10 to 15% of the general population with fatty liver may indicate normal levels of liver enzymes (6). So far, many therapeutic approaches have been suggested for the prevention and treatment of liver disease, but high costs, the length of treatment, and the side effects of these treatments have always been a major challenge of providing a solution to those who are at risk for fatty liver disease (7).

It seems that therapeutic strategies such as control of nutritional behavior and physical exercise can be effective in reducing the prevalence of the disease as well as improving the metabolic functions of the liver (8). Physical exercise is useful for controlling obesity in children and adults, and since most patients with nonalcoholic fatty liver are obese, the treatment of obesity by physical activity may reduce the risk of developing fatty liver (9).

Although studies have reported the positive impact of physical activity on risk markers for fatty liver disease, the type, intensity, and duration of exercise that may play the most beneficial roles are not yet fully understood (7). It has been reported in some studies that continuous training had no significant effect on the reduction of liver enzymes in obese women (4), but eight weeks of aerobic and resistance exercise training reduced alkaline phosphatase (ALP) levels in men with NAFLD (10); also, some researchers have suggested that interval and resistance training both improve liver enzyme levels and lipid profile in men with NAFLD (7); in addition, eight weeks of interval training decreased the alanine aminotransferase in obese boys, but had no significant effect on their ALP and AST levels (11).

In general, a weight loss training program emphasizes performing at least 30-minute bouts of consistent and continuous training, which have little effect on the body fat content. Since in interval training, there is an inclusion of rest periods or a decrease in the activity between repeated bouts of training, interval training may be a better option than continuous training for weight loss, fat percentage and improvement of fat profile that are closely linked to liver enzymes (11).

Considering the importance of prevention of NAFLD and its relation to physical activity, it seems that comparing the type of exercise training in individuals with different activity levels suggests a suitable solution for preventing liver damage due to life modernization. Therefore, the present study was carried out to investigate the effect of high-intensity interval training (HIIT) on BMI and liver enzymes in the active and inactive women.

In this quasi-experimental applied study, initially, a statement for participation in the present study was installed in important places of Islamic Azad University of Behbahan Branch and girls’ dormitories; then in a meeting, all the aims and areas of research, including the risks and benefits, were described to all those who were willing to participate in the research. The inclusion criteria were no history of specific illnesses such as diabetes, hypertension, etc., no smoking, and no specific drug consumption, and the exclusion criteria were unwillingness of a subject to participate in the research, participating in physical activity other than the present research protocol, or performing physical activity by control as well as absence more than three sessions from the training sessions. To select the subjects, their physical activity was assessed using the short form of the International Physical Activity Questionnaire (IPAQ) and based on IPAQ, active (score above 10) and inactive (score between 5 - 7) subjects were separated (12). Subsequently, 20 inactive individuals with inclusion criteria were selected purposefully and divided into training (n = 10) and control (n = 10) groups and 20 active individuals with inclusion criteria were selected purposefully and divided into the training (n = 10) and control (n = 10) groups.

Afterward, the initial evaluations were obtained and 6 cc of blood from the left brachial vein of each subject in the pretest was taken at the laboratory at 8:00 to 9:00 a.m.; the training groups then performed HIIT for 6 weeks and 3 sessions per week. Then 48 hours after the last training session, blood samples and demographic characteristic measurements were again obtained in completely similar conditions of the pre-test. Blood samples were then transferred to the laboratory at the earliest possible time and ALT and AST levels were measured using Pars Azmoon kit; also CRP was measured using Iranian Biotechnic kit via enzymatic photometry by Hitachi 911 device.

The training progressed by increasing the number of 30-second repetitions from four sets per session in the first and second weeks to five sets per session in the third and fourth weeks and six sets per session in the fifth and sixth weeks. Before each training protocol, the subjects warmed up for five minutes at each training session and cooled for five minutes at the end of each training session (including running and brief stretching and elasticity movements). The training protocol was based on the 40-m shuttle (back and forth) test at the maximum speed, which is a valid test for anaerobic performance evaluation. The maximum heart rate formula (HRmax = 220-age) was used to determine the intensity of the training, and in all stages of HIIT, the intensity was above 90% of HRmax, which was calculated separately for each subject (13).

Table 1 presents the mean and standard deviation (SD) of the demographic characteristics of the study. The results of one-way ANOVA test showed that there were no significant differences in weight levels of the research groups (P = 0.39, F = 1.02).

Table 1. The Demographic Characteristics of the Studied Subjectsa

Table 2. The Effects of HIIT on Liver Enzymes in Active and Inactive Women Figure 1. Changes of BMI in the pre-test and post-test in the study groups (mean ± SD) Figure 2. Changes of WHR in the pre-test and post-test in the study groups (mean ± SD) Figure 3. Changes of AST in the pre-test and post-test in the study groups (mean ± SD) Figure 4. Changes of ALT in the pre-test and post-test in the study groups (mean ± SD)

The liver is a vital organ to modulate and clean the body of toxins and waste materials and generally establish homeostasis. It seems that the most common causes of fatty liver disease in adolescents and young people can be weight gain, fat content, impaired lipid metabolism. It appears that the decrease in physical activity can be associated with a decrease in insulin sensitivity and an increase in fat deposition in the abdomen and organs, resulting in an increase in fat intake by the liver. Following these events and saturation of liver cells with fat, this tissue encounters fibrosis. On the other hand, these events are increased with elevating the levels of AST and ALT enzymes. It seems that when the amount of blood supply to the liver tissue is impaired, the liver cells are disrupted, the enzymes expel and increase in plasma (14). Nonetheless, the results of the present study show that the levels of ALT in the active control group are significantly higher than the active training and inactive training groups. This indicates that eight weeks of HIIT reduce ALT levels in active and inactive individuals. Researchers have mentioned in their studies that weight loss through lifestyle modifications, including calorie restriction and regular physical activity, has been recognized as a treatment approach for NAFLD (15); however, given the insignificant effect of interval training on BMI, increased participation in physical activity, independent of weight changes, may decrease liver fat and serum aminotransferase levels in individuals with fatty liver problems (9, 15). It is not unlikely that rapid weight loss may exacerbate the disease (15).

Studies show that exercise increases insulin sensitivity, changes in the skeletal muscle receptors, increases the expression of glucose transporter regulators, and subsequently, increases AMP, glycogen synthetase, and lipid metabolism, which result in increased liver tissue activity to be involved in providing energy to the skeletal muscle through lipolysis (15). Studies of the effects of endurance activities on liver enzymes have reported conflicting results, for example, in line with the present study, eight weeks of continuous training reduced ALP levels in men with NAFLD (10). In addition, some researchers have suggested that interval, resistance, and aerobic training resulted in improved liver enzyme levels and lipid profile in men with NAFLD (7, 14). These studies were in line with the present study to reduce ALT. It seems that the duration of training is an effective factor in the improvement of fat profile and subsequently, the reduction of ALT, which may be a reason for these studies’ consistency with the present study. Eight weeks of endurance training decreased ALT and AST serum levels in overweight patients with fatty liver (16, 17). Furthermore, although eight weeks of interval training reduced ALT in obese boys, no significant effect was evident in ALP and AST reduction (11).

In spite of the consistency of the results of these two studies in the reduction of ALT, it seems that differences in baseline levels, physical activity and age of the subjects were factors in the inconsistency of these results with those of the present study; 12 weeks of continuous training had a significant effect on weight and ALT serum changes in patients with obesity (18) and NAFLD (19). In another study, to examine the effects of acute physical exercise training, six hours after exercise Harris et al., observed a significant increase in ALT and AST in rats running on treadmills at high-intensity (80% of maximal oxygen consumption (VO2max) until exhaustion (20). Therefore, it can be stated that in one-session and high-intensity exercise training, because the exercise itself damages the cells, so it causes an increase in the levels of ALT and AST enzymes, a trend that is less pronounced in long-term exercises (21).

Given the common effect of obesity and exercise training on cytokines affecting hepatic inflammation, it seems that one of the limitations of the present study is the lack of the measurement of some inflammatory factors and their association with aminotransferases. It is, therefore, recommended that future studies of inflammatory agents should be measured along with liver enzymes. Also, given the effect of adiponectin on the lipolysis pathway, one of the limitations of the present study seems to be the lack of measurement of some adiponectin, leptin and ALP. Therefore, it is suggested that in future studies these factors should be considered along with the variables of the present study.

Although HIIT had no significant effect on AST serum levels in active and inactive women, it appears that HIIT can significantly reduce the ALT, as well as these changes, appear to be independent of BMI and WHR index. Therefore, conducting further studies is suggested to obtain more comprehensive information.

Copyright © 2019, Journal of Archives in Military Medicine. This is an open-access article distributed under the terms of the Creative Commons Attribution-NonCommercial 4.0 International License (http://creativecommons.org/licenses/by-nc/4.0/) which permits copy and redistribute the material just in noncommercial usages, provided the original work is properly cited.
COMMENTS