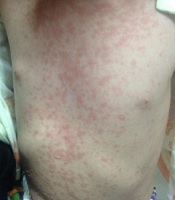 Toxic Epidermal Necrolysis (TEN) is a severe disease with high mortality, which can occur following the administration of some drugs such as antibiotics, anticonvulsants and non-steroidal anti-inflammatory drugs (NSAIDs). The condition is rare in children; therefore, providing a therapeutic experience and methods of care can be very helpful in similar cases.

A 32-month-old girl (2.8 years) was admitted at Mousavi Hospital of Zanjan (Iran) presenting weakness, illness, scattered macular lesions on the trunk and extremities, and several blisters on the trunk. He had a history of upper respiratory tract infection and had been administered a diclofenac suppository for fever. All the clinical manifestations appeared after diclofenac administration. The lesions rapidly progressed to extensive cutaneous necrosis with the involvement of more than 70% of the body surface. He was treated with high-dose intravenous immunoglobulin (IVIG), corticosteroid, and conservative management. Fortunately, the child was discharged in good general condition approximately one month after the onset of the illness.

Diclofenac can cause TEN in children, even in single doses and in suppositories. The most important prognostic factors include supportive therapy, contact isolation, hand hygiene, and administration of high dose IVIG for at least three days.

Toxic epidermal necrolysis is a severe and high-lethal disease that can be caused by some drugs, including antibiotics, anticonvulsants, and inflammatory drugs (NSAIDs). Although its pathogenesis is not yet well understood, it may be a phenomenon of increased sensitivity, inducing damage in the skin, mainly in the basal cell layer of the epidermis (1). Clinical manifestations include fever, weakness, illness, and diffuse cutaneous erythema. Oral, eye or genital lesions may appear before the cutaneous ones. The characteristic feature is the detachment and full-thickness destruction of the epidermis. Scarring in the eyes can lead to corneal opacity (1). The disease usually heals within two weeks or more. However, its course sometimes progresses and is complicated by severe dehydration, shock, electrolyte abnormalities, and secondary infection (1). In severe and progressive cases, heart, pulmonary, renal, hepatic failure, and complicated sepsis occur (2). Epidermal detachment presents in more than 30% of the skin of these patients. On average, about 25 to 50 percent of these children die (3). It is very important to determine the etiological agent. If the causative agent is a drug, it should be discontinued as soon as possible. The conservative management includes reversible isolation, appropriate fluid therapy, electrolyte modification, use of wavy mattresses, and evaluation of infection by culture sampling from potential infections. If there is a possibility of secondary infection, treatment with systemic antibiotics is indicated. Oral and eye care are also important (1). These patients should be monitored in the intensive care unit for infection and pain. Total Parenteral Nutrition (TPN) may be required (4). In the management of the disease, the use of intravenous immunoglobulin (IVIG) and corticosteroids is still controversial, but with some success (1). Treatment may take several weeks. In patients who improve, complications are seen such as skin hypopigmentation, nail deformities, chronic oral or genital ulcers, conjunctivitis, and even growth disorder (especially in children) (5).

The experience of physicians is poor concerning the management of this disease, most probably due to its rarity and the lack of detailed treatment. On the other hand, there are many controversies concerning the different treatment methods. The purpose of this case report is to provide a therapeutic experience and methods of care, which can be very helpful in enhancing the quality of treatment and reducing morbidity and mortality.

A 32-month-old girl (2.8 years) was admitted to the Mousavi Hospital of Zanjan (Iran) presenting weakness, illness, generalized macular erythematous cutaneous rashes on the trunk, extremities, genitals, and face with bleeding lesions on the lips and mouth, redness of the eye and conjunctivitis. On clinical examination, there were several small blisters on the trunk (Figure 1). She had a history of fever and consumption of a diclofenac suppository before the admission. The child had no history of drug allergies or any specific illness. She did not take any anticonvulsant or antibiotic medication. At the time of admission, the patient was not febrile; she was ill but not toxic and had stable vital signs. Initial paraclinical tests, including CBC, CRP, ESR, and LFT were normal. Within two days, the initial lesions rapidly progressed to necrosis and involved more than 70% of the body (Figure 2). The patient was transferred to pediatric intensive care unit (PICU). He was under reverse isolation, received sterile sheets and wavy mattress, appropriate fluid therapy was initiated, and then IVIG at a dose of 2g/kg daily for 3 days followed by intravenous Hydrocortisone at a dose of 10 mg/kg daily for three days were administered. The cutaneous lesions were covered with sterile Vaseline gauze. Glycerin solution and lidocaine gel were used for painful lesions of the mouth and genital area. The ophthalmologist also recommended artificial tears repeatedly administered with liposic gel and erythromycin ointment. Culture of ocular secretions was negative. Due to the severity and extension of the lesions, a central venous catheterization was placed. In the first week of hospitalization and due to the impossibility of oral nutrition, the patient was given Total Parental Nutrition (TPN), including intravenous infusion of amino acid, vitamins, minerals, and micronutrients. Intravenous Pantoprazole was also prescribed to prevent stress ulcer. Oral nutrition was started gradually from the sixth day and slowly increased daily. During the second week, the child had fever with elevated ESR and CRP. At that moment, samples from blood and urine for culture were sent. Nosocomial infection was considered; consequently, broad-spectrum antibiotics (Vancomycin, Imipenem, and Amikacin) were administered. However, all cultures were negative. The fever subsided within a few days. TPN was discontinued on day 18th. On day 20th, the general condition began to improve and new lesions ceased to appear. On day 21th, the patient was transferred from PICU to the ward, and finally, he was discharged in good general condition on day 29th. At that time, most of the lesions were dry and healing. Small blisters on the trunk Skin necrosis more than 70% of the body

The incidence of TEN in adults is higher than in children (5). It is often caused by some drugs, including Sulfonamides, Phenobarbital, and Penicillins. However, NSAIDs can also be a cause of the disease (5). This is the first case report of TEN in children following a single dose of diclofenac suppository. According to the search of medical databases (PubMed, Scopus, Medline, Google search), there are no reports of this involvement in young children in the country so far.

Rahimi et al. reported a 41-year-old man who had been diagnosed with TEN following NSAIDs (diclofenac suppository and naproxen tablets). This patient was treated with IVIG daily for 4 days and discharged after two weeks (6). Kameshwari and colleagues reported a case of TEN in a 59-year-old man who had been taking Etoricoxib. He was discharged after 16 days of conservative treatment (7). Basturk and co-workers reported a case of TEN in a 7-year-old boy appearing after ibuprofen. The disease involved about 30% of his body and was associated with liver damage. She was treated with supportive management, corticosteroids and ursodeoxycholic acid and eventually, the cutaneous lesions and hepatic impairment improved (8). Our patient, unlike the above, had no liver involvement. On the other hand, cutaneous lesions affected more than 70% of the body. It should be noted that ibuprofen is used for the treatment of fever in children over 6 months of age, but diclofenac is not recommended in children as an antipyretic. In general, for the treatment of TEN, potential causes of the disease must be discontinued, and complications controlled. The supportive treatment is crucial at the beginning. Although some articles arouse controversy over the use of IVIG in the treatment of TEN (1), other studies have shown that using IVIG with a dose of 2g/kg or higher can significantly reduce mortality (9). Our patient benefited from the use of IVIG and corticosteroids and was discharged in good general condition.

Copyright © 2020, Journal of Comprehensive Pediatrics. This is an open-access article distributed under the terms of the Creative Commons Attribution-NonCommercial 4.0 International License (http://creativecommons.org/licenses/by-nc/4.0/) which permits copy and redistribute the material just in noncommercial usages, provided the original work is properly cited.
download pdf 4.16 MB Peer Review Comments ( 114.69 KB) Get Permission (article level) Import into EndNote Import into BibTex
Number of Comments: 0