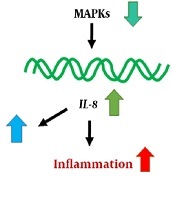 Cystic Fibrosis (CF) is the most fatal genetic disorder among white populations. It is a multi-system disease with various symptoms, which causes many different complications. miRNAs are a class of endogenous small non-coding RNAs of 19-22 nt that regulate mRNAs post-transcriptionally. Different types of miRNAs, including miR-155, are expressed in CF lung epithelial cells. The elevated expression level of miR-155 contributes to the pro-inflammatory expression of IL-8 in CF lung epithelial cells. Therefore, miR-155 may play an important role in the activation of IL-8 in CF.

The present study aimed to investigate the relationship between miR-155 expression level and the clinical manifestations of CF patients.

The participants of this cross-sectional study included 30 CF patients (according to sweat test and < F508 in the genetic study) with age ranging from 5 to 27 years (M = 17, F = 13) and 30 healthy individuals with age ranging from 8 to 28 (M = 17, F = 13). Using RNA purification Kit, microRNAs, we extracted microRNAs from serum samples, and cDNA was synthesized via the cDNA synthesis kit. Then, the levels of miR-155 were measured by real-time PCR, and the expression levels were compared in different groups of CF patients according to the Shwachman-Kulczycki scoring system.

The expression level of miR-155 was elevated in CF patients compared to healthy controls (Fold change: 1.41, P value = 0.056). Interestingly, the elevated level of miR-155 in severe and moderate patients (according to Shwachman-Kulczycki score) showed a significant difference compared to the other patients, where age and sex were not an influential factor.

Serum expression levels of miR-155 are different in CF patients, along with the severity of the disease. By suppressing the expression of miR-155, more investigations might lead to the development of new treatment strategies for CF.

Cystic fibrosis (CF) is one of the most common lethal genetic disorders inherited in an autosomal recessive manner (1, 2). It is a multi-organ disease with various manifestations, including mucosal infections, pancreatic exocrine insufficiency, insulin-dependent hyperglycemia, severe and chronic lung disease, which leads to different complications (3). Despite the improved treatment of CF and increased life expectancy, respiratory failure is still a principal cause of mortality in these patients (4). Therefore, to assess the disease progression, it is important to evaluate the patients and understand the involved parameters in the manifestation of CF signs and symptoms (5).

MicroRNAs (miRNAs) are major groups of biomolecules, which have important functions in a large number of biological processes, such as innate immunity development (6). These small non-coding RNAs (19 to 24 nucleotides) play a vital role in regulating the host gene expression at the post-transcriptional level (7). As the underlying regulators of the immune system, miRNAs contribute to the growth and differentiation of B and T cells, the proliferation of the monocytes and neutrophils, modulation of the antibodies, release of inflammatory mediators, as well as maintenance of the homeostasis and normal immune function (6-11). Recently, it has been shown that miRNAs have prominent roles in manifestations of CF, and numerous studies have reported changes in miRNAs of CF bronchial specimens based on cell culture results (10). Both in vitro and in vivo studies have indicated that among 22 miRNAs frequently expressed in CF cells, miR-155 was the most abundantly expressed miRNA (11). Tumor necrosis factor-α (TNF-α) encoded by the TNF-α gene is a pro-inflammatory cytokine, found at high levels in the airways of CF patients, which substantially contributes to inflammatory responses and induction of apoptosis in response to infections (12). MiR-155 responds to various inflammatory mediators such as TNF-α and IFN-β (7), and silencing the expression of this pro-inflammatory miRNA can prevent inflammation. Several studies have demonstrated that CF is characterized by an inflammatory response mediated by neutrophils, and the main neutrophil chemokine increased in CF is interleukin-8 (IL-8) (12). miR-155 is effective on IL-8 expression, and consequently, the up-regulation of miR-155 can promote inflammation in CF patients by driving hyperexpression of IL-8 (7).

Previous studies have evaluated miR-155 as a novel therapeutic target for the treatment of CF (13). Figure 1 represents a typical schematic for mir-155 action in CF. This miRNA can alter the expression of IL-8 through activation of the signaling pathway involving PI3K/Akt (phosphatidylinositol-3 kinase/protein kinase B) (7). The elevated levels of miR-155 promote inflammation in CF lung epithelial cells by raising IL-8 expression, whereas the antagonist of miR-155 inhibits the expression of this interleukin (7, 14). Also, an increase in miR-155 expression results in the activation of TGF-β and induction of lung fibrosis by increasing connective tissue growth factor (CTGF) in CF lung epithelial cells (14). The role of miR-155 has also been reported in the progression of lung fibrosis in systemic sclerosis (15), idiopathic pulmonary fibrosis (16), and several autoimmune and inflammatory diseases. 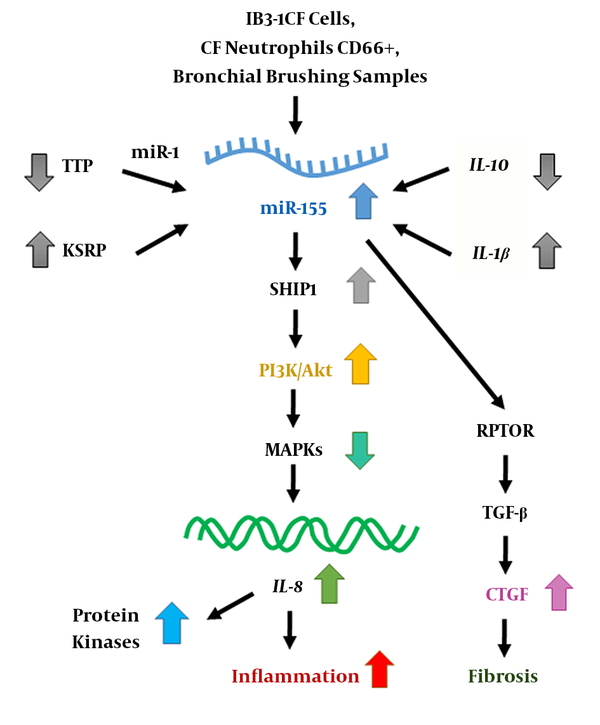 The present study aimed to investigate the relationship between miR-155 expression levels and clinical manifestations of CF patients in an Iranian population.

In this cross-sectional study, there were 30 CF patients (based on clinical manifestations, sweat test, and genetic testing of the homozygous F508del mutation) aging from 5 to 27 years (Average = 19), including 17 males and 13 females as well as 30 healthy controls aging from 8 to 28 years (Average = 21) including 17 males and 13 females. The patients were all referred to Masih Daneshvari Hospital, Tehran, Iran, from August 2018 until August 2019. Informed consent was obtained from participants or their parents. The study was approved by the National Research Institute of Tuberculosis and Lung Disease (NRITLD), No: IR.S­BMU.NRITLD.REC.1397.568. The study protocol was performed according to our previous research (5). Demographic data including age, sex, BMI, nutrition, clinical symptoms, sputum culture, and spirometry examination were collected for patients older than 4, and subsequently, the Shwachman-Kulczycki score was calculated. 4 ml of blood samples were collected from subjects and healthy controls, followed by RNA extraction from their serum samples using Qiagen RNeasy Mini Kit, Cat No.74104 (Qiagen) according to the manufacturer’s protocol. Total extracted RNA concentration was determined using a NanoDrop™ 2000c instrument (Thermo Fisher Scientific, USA) by measurement of 260/280 nm absorbance ratio. Next, cDNA was synthesized using the Reverse Transcription System Kit (ZistRoyesh, Iran) (17), and quantitative real-time PCR (qRT-PCR, Biocompare, Inc., South San Francisco, CA, USA) was conducted according to the following program: denaturation (1 Cycle) 30 s at 95°C, followed by amplification (40 Cycles) 5 s at 95°C, 34 s at 60°C and 5 s at 77°C (18). All of the melting curves represented single peaks, indicating specific PCR amplification. A simultaneous real-time PCR experiment was also performed for the house-keeping gene (U6) as an internal normalization control. Eventually, the expression levels of miRNAs were determined using the 2−ΔΔCt method normalized to U6 miRNA level, and the resulting data were analyzed via REST software and SPSS 16 (SPSS, Inc., Chicago, IL, USA), followed by the Student’s t-test. 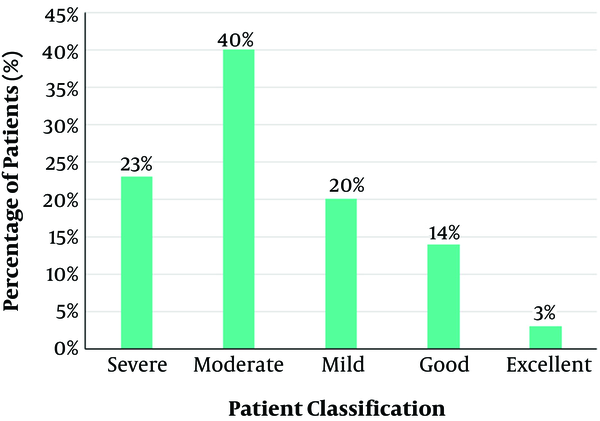 Grouping patients based on the Shwachman-Kulczycki score 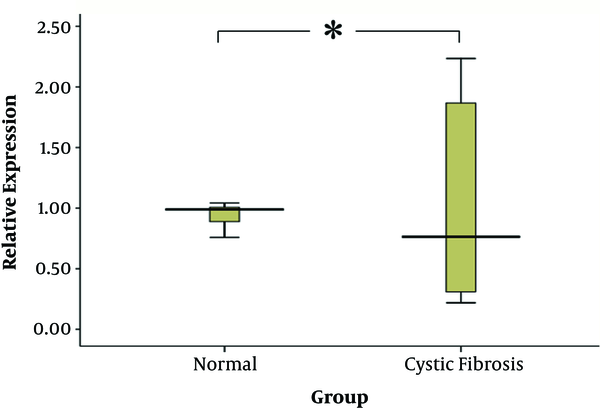 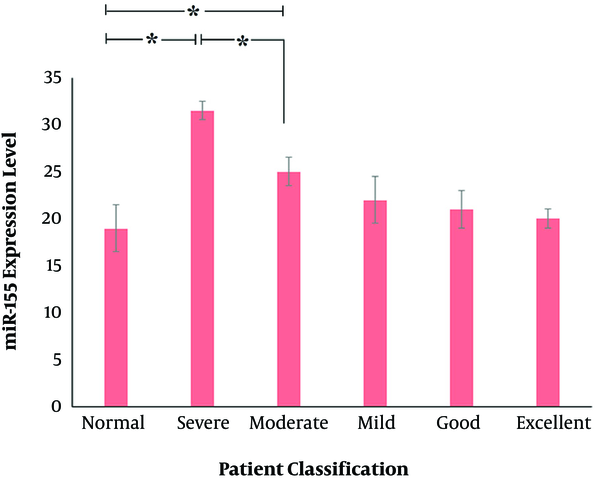 Findings of the present research demonstrated increased levels of miR-155 expression in CF patients, particularly in severe and moderate groups based on the Shwachman-Kulczycki score. The pathophysiology of CF is different from one patient to another, which can only be partially described by the CFTR genotype. Researchers have suggested that profiling of the serum miRNAs can be considered as a new approach for the discovery of prognostic biomarkers (11, 19). In this regard, expression levels of miR-155 have been previously shown to be increased in the serum of the CF patients, probably reflecting overexpression of this miRNA in CF airway cells (11). The results of the present study are following these findings since the increased expression of this miRNA was observed in serum samples of CF patients.

miR-155 is encoded by the MIR155 host gene (MIR155HG), and its expression is negligible and undetectable under normal physiological conditions (20). The inflammatory RNA binding proteins, including KSRP and TTP, regulate the biogenesis of miR-155 in CF lung epithelial cells (21). This miRNA regulates several genes encoding immunomodulatory, tumor-suppressor, and inflammatory-related proteins, and its high expression levels are often associated with disorders such as cardiovascular diseases, inflammation, inflammatory bowel disease (IBD), and different types of cancer such as colorectal cancer (CRC) (20, 22-24). miR-155 is upregulated in cancers of B-cell origin (25). It is clear that miR-155-5p is highly expressed in activated B and T cells as well as in macrophages (26). This miRNA is critical for normal immune function and controls the functionality of lymphocytes and dendritic cells (26). Moreover, the levels of miR-155 expression are elevated in patients with asthma, idiopathic pulmonary disease, and acute lung injury (27). These findings suggest the possible role of this miRNA in respiratory diseases as well as the immune system.

Previous studies have indicated that miR-155 is overexpressed in CF cell lines (IB-3 and CuFi-1) (11, 21), as well as CF neutrophils and primary CF bronchial epithelial cells (28), which leads to IL-8-dependant inflammation via PI3k/Akt pathway in these patients (11, 25). miR-155 is involved in the regulation of SHIP1 (SH-2 containing inositol 50 polyphosphates 1), activation of PI3k/Akt signaling pathway, and inhibition of MAPKs (mitogen-activated protein kinases), which leads to alterations in expression levels of IL-8 (11). Also, miR-155 antagomir down-regulates IL-8 in IB3-1CF cells, which can be considered as a novel treatment for CF (29). It is clear that in sterile CF cells, the up-regulation of the anti-inflammatory cytokine IL-10 or suppression of the IL-1β signaling pathway leads to the down-regulation of miR-155 and hence reduction of IL-8 expression, which consequently causes the inflammation to be decreased (30). These findings suggest that a better understanding of the molecular basis of miR-155 function and its regulation in a cell-specific manner might lead to designing miR-155-based therapies for CF.

The results of the present study indicated that miR-155 is upregulated in the serum of the CF patients. The increased expression of miR-155 contributes to the maintenance of a pro-inflammatory phenotype (30). Although the exact molecular mechanisms by which miR-155 affects the disease phenotype is not fully understood, previous studies have reported that RPTOR (the regulatory associated protein of mTOR complex 1) is a target of miR-155 in CF lung epithelial cells (14). During the process of EMT (epithelial-mesenchymal transition), the epithelial cells lose their phenotypes (e.g., cellular polarity or dissolution of cell-cell junctions) and consequently gain mesenchymal features. Dedifferentiation of the airway epithelial cells is part of the tissue remodeling through EMT. A protein factor, called TGF-β (transforming growth factor-beta), is a key intermediate for this process (25). In other words, the TGF-β signaling pathway causes remodeling of the pulmonary epithelium via signaling intermediates such as RPTOR, which leads to an increase in connective tissue growth factor (CTGF) and increased fibrosis (14). It has been shown that the TGF-β signaling pathway is upregulated in the lungs of CF patients (31), and this regard, miR-155 plays a main role in TGF-β-induced-EMT via contribution to the loss of epithelial polarity (25) and dissolution of tight junctions (32). The suppression of RPTOR expression by miR-155, followed by activation of the TGF-β signaling pathway, leads to the induction of fibrosis via increasing the levels of CTGF in CF lung epithelial cells (14). Accordingly, miR-155 might be potentially used for CF therapy as it can regulate fibrosis of CF lungs via elevating the expression of CTGF.

The present study demonstrated that serum levels of miR-155 are different in CF patient groups based on the Shwachman-Kulczycki scoring system. Further investigations are required to discover the exact mechanism of action by which miR-155 affects the disease. Also, it is recommended to assess antagonizing miR-155 as a potent method for the suppression of the pro-inflammatory genes in CF cells, which might have potential as a candidate for CF therapy. The results of the present study can be evaluated on a more extensive range of patients to obtain more applicable outcomes.

Copyright © 2020, Journal of Comprehensive Pediatrics. This is an open-access article distributed under the terms of the Creative Commons Attribution-NonCommercial 4.0 International License (http://creativecommons.org/licenses/by-nc/4.0/) which permits copy and redistribute the material just in noncommercial usages, provided the original work is properly cited.
download pdf 569.53 KB Get Permission (article level) Import into EndNote Import into BibTex
Number of Comments: 0