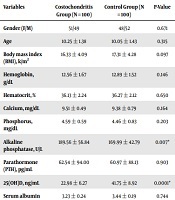 In children, vitamin D deﬁciency can result in the hypertrophy of costochondral junctions and sternal pain.

In this study, we aimed at determining the correlation between children’s vitamin D status and costochondritis.

The groups showed no significant difference regarding age, gender, or body mass index (P = 0.315, P = 0.671, and P = 0.097, respectively). The history of patients experiencing idiopathic chest pain showed cardiac disease in 13% of their families, without report of death in the family. The pain was mainly located in the left precordium (64%), followed by the right precordium and the midsternal region (32% and 18%, respectively). A significantly lower level of 25-OHD was found in the study group than in the control group (P < 0.0001). Based on the findings, the groups were not significantly different regarding the evaluated biochemical parameters, except for alkaline phosphatase (P = 0.007). The results showed that pain duration and episodes were significantly associated with vitamin D insufficiency (r = -0.621, P = 0.002; r = -0.213, P = 0.021, respectively).

In children, after serious cardiopulmonary conditions are considered, musculoskeletal disorders, such as costochondritis, are the significant causes of chest pain commonly attributed to the final diagnosis (1). Although the epidemiology of costochondritis is not well established, it is one of the common causes of chest pain in children (2). Costochondritis is described as the inflammatory status of chondrosternal joints in the anterior chest wall or costochondral junctions of ribs. The cause is usually unknown and not clearly understood, but it may be related to inflammation of junctions where the upper ribs join with the cartilage to the sternum (3). Vitamin D is necessary for bone health, and severe deficiency can cause rickets in children. Although osteomalacia can cause severe generalized bone pain, there are only reports of vitamin D deficiency associated with chest pain (4).

Torun et al. found that in pediatric patients, there is a significant association between vitamin D deficiency/insufficiency and the duration and frequency of idiopathic chest pain in pediatric patients (7). In this regard, Oh and Johnson (8) suggested an association between chest pain related to costochondritis and vitamin D deficiency. Previous studies emphasized the importance of examining and treating vitamin D deficiency in individuals diagnosed with costochondritis. Mosimann and Meier (9) reported the case of a young Turkish woman living in Germany, who suffered from chest pain (left-sided), without any remarkable electrocardiography, d-dimer, or troponin results. The level of 25-OHD was 4 ng/mL in the patient. Osteomalacia associated with chest pain was diagnosed in the patient, and treatment was initiated with calcitonin, calcium, and vitamin D, which resolved the symptoms within 60 days. Such reports suggest severe vitamin D deficiency and osteomalacia as the main causes of chest pain.

A study showed that the causes of chest pain could be diagnosed by history-taking, physical exams, and cardiac auscultation. Further tests such as echocardiography, ECG, chest X-ray, and laboratory tests were not essential to diagnose cardiac pains as the first-line evaluation (10). But often, research suggests that bone pain can be related to vitamin D deficiency. This finding suggests a hypothesis that vitamin D deficiency may be associated with costochondritis.

This study was carried out in Amir-Kabir hospital, affiliated with Arak University of Medical Sciences, Arak, Iran, between September 2017 and April 2018. Written consent was obtained from the parents, and the Ethics Committee of the university approved the protocol (code: IRAK MU.REC. 1397.253).

A sample size of 100 was estimated for each group (α error = 0.05; β error = 0.2) (7). This prospective study included 100 school children with the primary complaint of chest pain, referred to the Pediatric Cardiology Unit of our hospital. In addition, a control group, including 100 healthy individuals, was recruited. The control group was selected as far as possible from the other offspring of the family to eliminate various confounding causes. On the other hand, individuals whose chest pain was associated with cardiac (e.g., acute rheumatic fever, pericarditis, and myocarditis), pulmonary (e.g., pneumonia, severe asthma, and pleural effusion), gastrointestinal (e.g., gastritis and esophagitis), or other chronic disorders were excluded from the study. Similarly, patients with an abnormal echocardiogram or electrocardiogram were eliminated. Costochondritis was determined with a clinical examination by a pediatric cardiologist.

The serum levels of biochemical markers, including phosphorus, calcium, and alkaline phosphatase, were measured using the calorimetric method, and parathormone (PTH) was evaluated according to the electrochemiluminescence immunoassay method in a PTH kit. Hemoglobin (g/dL) and hematocrit were measured by a cell counter device, and troponin I and vitamin D were measured using the ELISA method. Vitamin D levels < 10, 10-30, and > 30 ng/mL were regarded as deficient, insufficient, and sufficient, respectively.

For data analysis, SPSS version 23 (SPSS Inc., USA) was used. Continuous and categorical data are presented as mean ± SD and frequency/percentage, respectively. The independent samples t-test was used for group comparisons. Also, Spearman’s correlation and chi-square tests were applied to determine the relationships between variables. The significance level was set at 0.05.

The physical examination indicated pectus excavatum in two children. The level of troponin I was measured initially in all patients; no abnormal results were obtained. Chest pain had no significant association with deep breathing or body position. None of the children showed symptoms, such as dyspnea, dizziness, vomiting, syncope, regurgitation, heartburn, or painful swallowing.

There was no patient with serum vitamin D deficiency (0%), while the prevalence of vitamin D insufficiency and sufficiency was 94% and 6%, respectively. The serum 25-OHD level was significantly lower in the study group than in the control group (P < 0.0001). However, patients with 25-OHD < 30 ng/mL showed normal initial biochemical parameters, except for alkaline phosphatase (Table 1).

Chest pain persisted one month and less than one month in 19.2% and 79.2% of the patients, respectively. It was mainly reported in the left precordium (64%), followed by the right precordium and mid-sternal region (32% and 18%, respectively). The pain was sudden and sharp (< 1 min) in the majority of the patients, both at rest and during exercise. Variable pain frequencies and durations were reported in this study (Table 2).

Table 3. Relationship Between Vitamin D and Pain Characteristics in the Case Groupa

Children have a growing and developing nature. During the growth period, musculoskeletal health, in which vitamin D is a major component is very important. Deficiency in 25-hydroxyvitamin D (25-OHD) is an underestimated phenomenon in children. In fact, vitamin D is integral to bone, phosphorus, and calcium mineralization. In children, vitamin D deficiency can lead to the hypertrophy of costochondral junctions. It also can stimulate sternal pain in adults who suffer from osteomalacia. According to previous studies, 25-OHD is essential to bone health, and its serum level can predict vitamin D storage in the body (3). In a recent report by the Institute of Medicine, in 97.5% of the general population, a serum concentration of > 50 nmol/L (30 ng/mL) is considered adequate for 25-OHD to maintain bone health. Accordingly, levels < 50 nmol/L (10 ng/mL) suggest vitamin D deficiency (11, 12).

The research showed that vitamin D has an anti-inflammatory effect mediated by reduced cytokine and prostaglandin release with effects on T-cell responses (13). In patients with vitamin D deficiency, pain sensation increased excitability because of the lack of anti-inflammatory effect and its effect on nerve function (14, 15). Recent studies have implicated that vitamin D supplementation is also useful to reduce pain severity and improve musculoskeletal mobility (16, 17).

In this study, we found a significantly lower level of 25-OHD in the study group than in the control group. Also, the results showed that pain duration and episodes were significantly associated with vitamin D insufficiency. Kayali et al. (6), in another study, showed that the vitamin D level was significantly lower in children with idiopathic chest pain. In their study, of 109 children diagnosed with idiopathic chest pain, there were 65 (57.8%) children with vitamin D insufficiency, and 40 (36.7%) children in the study group had vitamin D deficiency.

Chest wall pain, described as either aching, sharp, or pressure-like, is the primary symptom of costochondritis. Upper body movements, exertional activities, and deep breathing usually exacerbate pain. Chest pain is often associated with recent strenuous exercise or physical activity, affecting the upper extremities. Despite the impact of chest pain on the second to fifth costochondral joints, all seven costochondral junctions may be involved. Pain may also occur in more than one location although it is often unilateral.

The etiology of chest pain is dependent on its symptoms (chronic or acute); however, cardiac disease is rarely an etiology in children. On the other hand, gastrointestinal and musculoskeletal disorders are the most important contributing factors to chest pain in children, necessitating an extensive diagnostic work-up. All children with chest pain in the present study showed normal physical results on the cardiological evaluation. The results of electrocardiography, chest radiography and echocardiography also indicated no pathologies.

In the current study, the two groups showed normal biochemical markers and CBC. Also, hypocalcemia, hyperparathyroidism, and hypophosphatemia, as the biochemical parameters of osteomalacia, were not reported in children; this may be attributed to the shorter duration of vitamin D insufficiency which did not produce any abnormal biochemical results. The PTH secretion is majorly caused by the low serum level of ionized calcium, which is indicative of severe vitamin D deficiency; therefore, hypocalcemia or increased PTH production was not found in children with vitamin D insufficiency.

No reduction was found in the level of 25-OHD and intestinal calcium absorption until 25-OHD concentration reached ≤ 4 ng/mL, which represents severe vitamin D deficiency (18). Although the 25-OHD level < 10 ng/mL (suggestive of osteomalacia) was not found in any of the patients, mild vitamin D insufficiency may induce pain at costochondral junctions, similar to patients with osteomalacia. Moreover, Sanli et al. (19) in a study on healthy children examined the association between the osteocalcin level, musculoskeletal chest pain, and bone mineral density. They suggested that reduced bone mineral metabolism might be related to musculoskeletal chest pain (19).

Torun (7) showed a significant association between vitamin D deficiency/insufficiency and the duration and frequency of idiopathic chest pain in pediatric patients. They found that the duration of symptoms and episodes increased as vitamin D levels decreased. In their study, serum vitamin D levels were significantly lower in the study group than in controls, but except for alkaline phosphatase, other biochemical parameters did not differ to a statistically significant degree. The location of chest pain was in the left precordium (64%), right precordium (32%), and midsternal area (18%). The histories of the patients revealed 22% with heart disease and 6% with a recent death in the family, and also chest pain was present for one month in 19.2% and < 1 month in 79.2% of the patients.

In line with recent research, the present study showed that the concentration of vitamin D was significantly lower in the study groups than in the controls. Patients in the present study had no serious underlying conditions, and their pain usually recurred; however, the symptoms generally resolved over time. Also, the patients’ age at the onset of chest pain was 11 years on average; this finding confirms previous studies that showed that preadolescents and adolescents (especially 12 - 15 years) are susceptible to vitamin D deficiency (20). Since in this age group, bone turn-over increases due to growth spurts, inadequate sunlight exposure, and calcium/vitamin D supplementation can cause clinical manifestations, such as musculoskeletal pain.

Considering the timeframe of the present study (September 2017 to April 2018), it can be concluded that vitamin D storage due to exposure to the summer sun was inadequate for the winter. In addition, studies on vitamin D have indicated seasonal variations (19). Also, studies on adults have reported diffuse skeletal pain in association with low concentrations of vitamin D. In fact, vitamin D replacement therapy is recommended for patients who present with non-specific, persistent musculoskeletal pain and vitamin D deficiency (16, 21).

It is worth mentioning that costochondritis may be related to the increasing frequency of vitamin D deficiency in the pediatric population. The cross-sectional design of this study is its main limitation. As this was a single-center study, the number of cases was very low. Also, the interpretation of the results would be more reliable if the study was carried out with a case-control design among patients on vitamin D therapy. Also, it is recommended to examine patients after vitamin D supplementation.

We extend our gratitude to the staff of the pediatric ward for their assistance in collecting the data.