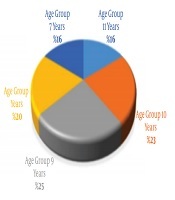 Parasitic diseases are one of the health problems in all societies, especially in developing countries. Infection with parasites, especially in children, can be associated with learning disorders, malnutrition, anaemia, and physical disorders. On the other hand, an abnormal increase in the theta brainwave amplitude may also be one of the causes of mental slowness and disability in children’s learning, decentralization, or attention deficit hyperactivity disorder (ADHD).

In this study, we assessed the possible effects of intestinal parasites on brainwave changes in children in Karaj Health centers.

A stool examination was done to separate healthy and infected children. Then, using a diagnostic interview and electroencephalography, the theta-wave was recorded in both groups.

In this study, there was a significant relationship between parasitic infection and brain wave changes. Parasitic diseases may alter brainwaves with unknown mechanisms and affect the ability and activities of the brain.

Parasitic infections are one of the most common health problems in developing countries. Various types of intestinal parasites can cause human infections and can produce a wide range of symptoms (1, 2). The most common pathogens of the intestine are Giardia lamblia, Entamoeba histolytic, Cryptosporidium sp., and Blastocystis (1, 3). The prevalence of intestinal parasites in primary school children was reported 47% in the city of Varamin of Iran (4). Gastrointestinal complications such as diarrhoea, weight loss, anaemia, abdominal distension, and abdominal pain, as well as some additional disorders such as teeth grinding, night sweats, sleep deprivation, restlessness, anger, and anal itching have been reported as symptoms of these parasites (1).

In Iran, many efforts have been made to control parasitic infections for many years. As a result of this endeavor, the prevalence of different helminths such as Ascaris lumbricoides and Trichuris trichiura have greatly decreased in recent years (5), but other worms such as Enterobius vermicularis, as well as parasitic protozoa like Giardia lamblia are still observed among different classes of the society, especially young people because of the social, economic, cultural, geographical, and demographic conditions (2). Some studies have been done on the effects of blood-parasitic infections and their relationship with personality and behavior changes, but few surveys have been done on the association between intestinal parasites and childhood behavioral disorders (6-9). In a study of 194 malnourished children with several parasitic agents, parasites that disturb a person's nutrition seem to have the potential to affect neuropsychological functions (10).

Neurofeedback is a method that assists persons to control brain waves consciously. Neurologic information is given back to the central nervous system (CNS), and it is attempted to teach the person how to correct their brain function. In this method, brain activity is described by using electroencephalography (EEG) (11). The neurofeedback EEG has brain sensors to measure brain waves, and it can change the predetermined range of brain waves, degrees of oscillation, or phase differences (12). The brain waves are divided from low to high frequency into delta, theta, alpha, beta, and gamma waves, respectively. Theta waves (4 - 8 Hz) play an important role in the internal, memory focus, creativity, intuitive and sensory understanding (13). The most important wave in children is theta wave, the abnormal increase in theta wave amplitude leads to an increase of reaction time and disability in learning and concentration, and hyperactivity (14). As the age increases from childhood to adulthood, the theta wave amplitude decreases gradually, and the alpha wave amplitude increases, but at the end of middle ages and aging, the theta amplitude increases, and the alpha wave decreases again (13). One of the most common neurobehavioral disorders is Attention-deficit/hyperactivity disorder (ADHD) of childhood, which causes an abnormal increase in theta wave and affects the social interactions of children (15).

Because of the limited studies on the probable efficacy of intestinal parasites on the brain waves of children, the present study examines the changes in the level of theta waves recorded by the neurofeedback system in infected and non-infected children with parasitic agents aged 7 - 11 years in the city of Karaj.

This cross-sectional descriptive study was carried out during the years 2017 - 2018 on 69 girls and boys aged 7 - 11 years in the Karaj City Center who were convinced to participate in this project. All children who were in the above range and the kindergarten officials had given their consent to participate in the project were included in this study. The sample size was estimated by the Cochran formula using the Morgan table in an unlimited society and based on retrospective studies with 95% confidence and a margin of error of 2.5%.

The data gathering tool was a demographic information question form with a query of age, gender, and general health conditions. Participants were assured that personal information was effectively protected against improper usage. The usual procedure for intestinal parasite laboratory diagnosis is a collection of 3 small stool samples that were performed by direct or wet-smear preparation and various concentration methods. Therefore after collection of stool specimens and the completion of the information form, all specimens were examined by macroscopic and microscopic methods, including direct test and formalin ether concentration. Scotch tape or Graham test was used to isolate and identify the eggs and adult forms of Enterobius vermicularis (16).

In the next stage, brain wave assessments were performed with the help of the neurofeedback procedure. The instrument of neurofeedback measurement consists of a diagnostic interview by a psychologist (lasted about an hour) and quantitative electroencephalography. The psychologist’s interview included taking history and finding mental health problems. This report represented the current situation, background information about the child, how he/she works in the school, medical history, details on medicine consumption, sleep, exercise, diet, and family (parents, siblings, and psychiatric signs in the whole family). Quantitative electroencephalography (qEEG) was saved as a tool for recording brain activity with electrodes attached to the head. The brain waves were recorded from the 19th Eb Neuro EEG channel 40 using a special hat on the head. The qEEG was done for one-hour with a 128-Hz sampling rate. In an article in 1994, helminth infections were associated with poor memory and IQ abnormalities (17). Lenartowicz et al. (13) in 2014 found that electroencephalography (EEG), with only the use of electrodes at the forehead, plays an important role in assessing the performance of ADHD children due to the cheapness, availability, and non-use of harmful electromagnetic radiation. Any changes of EEG rhythm in the forehead sensors were associated with behavioural problems and as a sign of abnormal brain function. Abnormalities are shown by graphs on the tape in children with attention deficit hyperactivity disorder (13). Brain waves were written in three situations of closed eyes, open eyes, and cognitive tasks (like reading) for at least six minutes. SPSS X16 was used as project software. The relationship between intestinal parasitic infections, demographic factors, and brainwave results was analyzed by the chi-square test, and P < 0.050 is considered as statistically significant.

The study was approved by the Institutional Research Ethics Committee School of Medicine of Iran with code number: IR.IUMS.FMD.REC.1397.008.

Written informed consent was obtained from all study participants’ parents.

The statistical population included children aged 7 - 11 years old in Karaj City of Welfare centers in Iran. The age and symptoms of participants were shown in Figure 1.

The left-pie chart shows the percentage of different reported symptoms, and the right pie chart is about the scattering of the project population

Theta brainwave results display 14.49% (10 persons) of children had an increase in their diagram, but the interesting point was that 100% of infected children had a high brainwave, and a significant relationship was observed between theta wave and intestinal parasites in this survey (P value = 0.001). On the other hand, only 6.34% of healthy people had high theta waves. Theta wave test results according to infected and non-infected individuals are shown in Table 1.

Parasitic infections are reported globally with high prevalence in poor health and economy societies and can affect the quality of life and learning in infected children (18). In this study, all 69 children were tested with scotch tape and three-time stool examination to find different intestinal helminths like A. lumbricoides, T. trichiura, and E. vermicularis and different protozoa like G. lamblia, E. histolytic, Cryptosporidium sp. and Blastocystis. In Iran, the Khash children’s study reported the prevalence of 24.1% for Enterobius (19), which is probably due to the severe deprivation of health status. Fortunately, the present study showed differing results. In another study in Iran in Rey City, the prevalence of Oxyuridae was 15.49%; again this discrepancy with recent surveys emphasizes the improvement of health levels in the past of 19 years (20). In a relatively new study on mental disabilities in Urmia in Iran (21), the prevalence of E. vermicularis was 1.3%, which highlighted, like this study, the promotion of health and welfare in the cities.

Here, the prevalence of intestinal parasitic infections was 8.7%. In similar studies with the same method, in southern Tehran (2005) (22) and Karaj (2008) of Iran, the prevalence was 10.7% and 7.7%, respectively. Also, the prevalence of parasites was 21.2% in Tehran in 2008 (5), 74.6% in Tonekabon in 1992 (23), %25 in Mazandaran in 2005 (24), and %19.66 in Kirkuk in 2015, by formalin-ether concentration and Ziehl-Neelsen staining (25) that can assume the proportions of contamination were somewhat similar considering the year and cities. Although the spread of parasites was very high in the past based on the overall prevalence of intestinal parasites in wastewaters (26) but today it has declined due to the rising levels of health. Accordingly, the data gathered from this study shows no helminthic infection, which is probably due to the upgrade of urban lifestyles and the improvement of public health and environmental sanitation (27). Another important point in this study was the prevalence of different protozoa. E. coli had a rate of 5.8%, similar to the Soleimani et al. study in Ghaemshahr, Iran, in 2014 with an incidence of %2.1 (28) and %9.7 in Tappeh (21), Iran in 2008 between disabled children. In both studies like this, E. coli was the most common type of protozoan found in the stool.

In a 2017 review article, cognitive-behavioural studies were done on children infected with soil-transmitted helminths, but the result was very conflicting and contradictory. It was probably because of various methods for the study of children’s cognitive activities (29). So in this project, EEG was used as one of the best instruments for evaluating abnormality in brain function both in infected and non-infected children with parasitic agents. It was said that multiple etiologies’ conditions can be early markers for ADHD, such as infectious diseases (30). On the other hand, the findings regarding parasite prevalence and cognitive ability have shown a negative relationship between the intensity of infectious diseases and average national IQ worldwide (31). Intestinal parasitic infections are more common in developing countries, which can affect the quality of life of people infected with these infections and in children, the effects of which are reported to be more severe. On the other hand, with increasing age from childhood to adulthood, the range of theta wave gradually decreases, and the amplitude of the alpha wave increases. However, in late middle age and old age, the amplitude of the theta wave, and the decrease of the alpha wave amplitude are observed again. It is seen in people with a variety of neurological disorders, as well as in children with ADHD and learning disabilities, an increase in theta wave amplitude and a decrease in the alpha amplitude similar to what happens when a child is infected with parasites.

The data of this survey express that intestinal parasitic infection rates have relatively decreased, probably be due to the rise of hygiene standards. In addition, 100% of children infected with parasites had high theta wavelengths that could lead to long reaction time, learning disability, and lack of concentration observed in these children. In other words, it might be said that abnormalities of the theta wavelength are associated with parasitic diseases. It seems, parasites probably could be capable of altering the brain. It is suggested that this study be conducted in a larger society and on a larger number of people with parasitic agents before and after treatment.