Risk Factors of Early Breastfeeding Jaundice: How Can Gynecologists and Nurses be Effective in Reducing It? 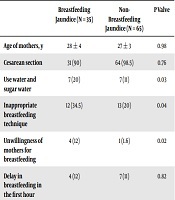 Neonatal jaundice is one of the most common neonatal problems. About 60% of term and 80% of preterm neonates have jaundice.

Due to the high prevalence of early neonatal jaundice, which can lead to mothers’ concerns and even hospitalization of neonates, we decided to study the frequency and risk factors of breast feeding jaundice to determine the role of gynecologists and nurses in the development of this type of jaundice.

This study was a cross-sectional descriptive study. The sampling method was by convenience. Study populations included one hundred terms, exclusively breastfed neonates aged equal or less than seven days with jaundice who were admitted in Golestan and Khanevadeh hospitals Tehran, Iran from July 2019 to January 2020.

Usually, hyperbilirubinemia is physiologic and a natural phenomenon in the neonatal period. In most cases, inadequate breastfeeding causes jaundice rather than the direct effect of breast milk itself (5). There are two types of jaundice caused by breastfeeding. The first type (breast feeding jaundice) is due to inadequate calorie intake or breastfeeding. This type of jaundice occurs early and usually within the first week of birth. Neonates with the uridine diphosphate glucuronosyl transferase 1A1 (UGT1A1) gene polymorphism are more susceptible to this jaundice (6). The second type (breast milk jaundice) has a later onset and is due to abnormalities in breast milk (7).

Jaundice caused by inadequate breastfeeding usually occurs 2 - 4 days after birth and dehydration and calorie deficiency are the major causes of this jaundice. Early mother-child counteraction is effective for the prevention of this type of jaundice and interruption of feeding is no longer recommended as a diagnostic procedure (8). The most important causes of inadequate breastfeeding are breast congestion, fissure, mastitis, depressed nipple, maternal fatigue, and inadequate nutrition of the mother. Also, the mother’s unwillingness to breastfeed, receiving serotonin substance reuptake inhibitors (SSRIs) (9), and lack of awareness of mothers about the importance of proper breastfeeding in prevention of neonatal jaundice are important causes of this type of neonatal jaundice that can be remedied by education during pregnancy and after childbirth. These factors decrease the volume of breastfeeding and lead to inadequate intake of calories and fluids, leading to delayed meconium excretion and increased bilirubin reuptake in the enterohepatic cycle (10).

Due to the high prevalence of early neonatal jaundice, which can lead to mothers’ concerns and even hospitalization of neonates, we decided to study the frequency and risk factors of breast feeding jaundice to determine the role of gynecologists and nurses in the development of this type of jaundice. Despite the extensive training provided during pregnancy and postpartum for proper breastfeeding, this study can show that educational training for mothers is still insufficient and more practical training is needed to increase mothers’ knowledge and awareness in order to prevent this type of jaundice and reduce hospitalization of neonates.

This study was a cross-sectional descriptive study. The sampling method was by convenience.

Study populations included one hundred neonates with jaundice who were admitted in Golestan and Khanevadeh hospitals Tehran, Iran, from July 2019 to January 2020.

Patients were evaluated by a pediatrician and, if they had jaundice, they would be enrolled in the study. Inclusion criteria were early-onset (first week) hyperbilirubinemia, healthy term neonates, exclusively breastfed and age equal or less than seven days, as well as the absence of metabolic disorders in neonates and mothers. Exclusion criteria were delayed onset (second week and later) hyperbilirubinemia, illness, preterm neonate, age more than seven days and neonates with intestinal disorder. Breast feeding jaundice was hyperbilirubinemia in an exclusively breastfed newborn with a weight loss greater than 7%, serum Na ≥ 150 mEq/L, urine specific gravity > 1012, and serum urea ≥ 40 mg/dL without any causes of jaundice (10).

Informed consent was obtained from mothers and name and information of subjects were kept confidential. The ethics committee of AJA University of Medical Sciences approved the research project of this study.

Table 1. Frequency of Causes Jaundices and Mean of Bilirubin in Admission and Discharge of Neonatea

Risk factors affecting the prevalence of jaundice in both groups were shown in Table 3. The most significant factors in breastfeeding jaundice were: use of water or sugar water; depressed nipple; mother’s unwillingness to breastfeed; inappropriate breastfeeding technique and birth weight < 2500 g (P < 0.05) (Table 3).

Due to the high prevalence of early neonatal jaundice, which causes concern for mothers and family, we decided to determine the frequency of breast feeding jaundice and the risk factors contributing to its development. In this study the most important risk factors (about 13 factors, Table 3) that are effective in early jaundice were investigated. In a few studies, all of these factors were studied together. This study showed that breastfeeding jaundice accounted for 35% of neonates hospitalized for jaundice in the first week. Use of water or sugar water, depressed nipple; mother’s unwillingness to breastfeed; inappropriate breastfeeding technique, and birth weight < 2500 g were the most significant factors in developing BFJ.

There were diverse statistics on the frequency of BFJ. Tanticharoenwiwat and Techasatid et al. (11) found that BFJ consisted of 47% of neonates’ hospitalizations due to jaundice. A study in Pakistan showed that the frequency of BFJ was 60% (12). Another study in USA confirmed that the frequency of BFJ was 15.5% (13). However, in our study, it was 35%. Effective breastfeeding in Iran seems to be better than Thailand and Pakistan. But it seems that race and genetic polymorphism are the main causes of jaundice and therefore the prevalence of early jaundice in diverse races is different. Neonatal hyperbilirubinemia is more common in residents of East Asian and around the Mediterranean, especially in Greece, and in people living in the highlands (1).

In the Huang et al. (16) study, only neonates ≥ 2500 g were studied. This study showed that although weight loss and gestational age increased the risk of jaundice, but it was not due to ineffective breastfeeding in Chinese neonates. They believed that race was a significant factor in the development of jaundice. But our study also studied neonates < 2500 g and found that weight < 2500 g and inappropriate breastfeeding technique were important risk factors in BFJ.

The use of water or sugar water during breastfeeding reduces calorie intake and causes jaundice (17). According to the findings of the present research, the use of these supplements was about 20% which was statistically significant compared to the NBFJ (11%).

A study showed that proper breastfeeding can prevent weight loss and reduce the occurrence of jaundice (18). In our study, in 65.5% of newborns, breastfeeding was effective with proper technique and in 34.5% of newborns with BFJ was not found. This was an important factor that was statistically significant compared with the NBFJ.

Due to the side effects of SSRIs such as drowsiness and restlessness, which were seen especially in fluoxetine and citalopram, mothers who received these drugs may have more problems with breastfeeding. Therefore, these mothers need more support for breastfeeding, although this may be related to their underlying disease (19). In the present study, the mother’s unwillingness to breastfeed was 12% in BFJ and 1.6% in NBFJ groups that was a significant difference between the two groups; however, we did not study the effect of such drugs on breastfeeding.

Nilsson et al. (20) believed that early discharge of newborns could lead to nutritional problems and readmission, which could be due to inadequate breastfeeding and weight loss and as a result causing jaundice. In their study, mothers were hospitalized for 50 h and effective breastfeeding training was provided. They found that by effective breastfeeding, readmission rate and jaundice that required treatment were lower in their newborns (20). In Iran most of the newborns were discharged within the first 24 hours after birth. In our study, the mean length of hospitalization was 1.9 ± 0.537 days and proper breastfeeding training (close and appropriate mother-neonate contact, feeding in the first hours after delivery, and frequent breastfeeding) by physicians and nurses were done during hospitalization in 88%. But in practice, proper breastfeeding technique was seen in only about 65.5%, indicating that training of mothers should be provided more thoroughly, in simple methods and frequently by nurses to achieve proper and effective breastfeeding.

Another study showed that a bulletin about proper breastfeeding was effective. This study found that the quality of feeding increased from 48% to 63% (21). We did not use a bulletin, but with direct training the effective feeding rate was about 65.5%. It seems that using a bulletin can improve the breastfeeding technique.

This study showed that despite proper breastfeeding education in Iran, but in practice, breastfeeding technique, attention to breast problems, use of supplements (especially water and sugar water) during feeding and attention to newborns with weight < 2500 g were not sufficient, and these were the major causes of weight loss in newborns and breastfeeding jaundice. Most of the newborns were discharged within the first 24 hours after birth, which may be one of the main causes of inadequate attention to these risk factors. It is suggested that effective breastfeeding of mothers can be achieved by increasing the quality of education by midwives and nurses during pregnancy and also more attention to the above-mentioned risk factors in the first 24 hours after birth and, as a result, reducing the breastfeeding jaundice and readmission. Many of these above risk factors are related to before birth; thereby, the role of midwives, gynecologists, and nurses is crucial. One of the limitations of this study was the lack of studies on maternal education level and the number of previous deliveries in the quality of breastfeeding.

The authors thank faculty and members of the Pediatric Department of Golestan and Khanevadeh hospitals and all mothers who helped us is a way to complete this project.