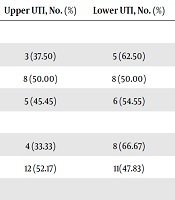 Constipation and Urinary Tract Infection (UTI) are common problems in children. The gastrointestinal tract and the urinary system are related together anatomically and functionally. Constipation is one of the possible causes of UTI and its recurrence.

The purpose of this study was to evaluate the association between the duration of constipation and the frequency of upper and lower UTI in children in Sanandaj.

A descriptive-analytical study was performed on children with chronic constipation aged less than 12 years, referring to the Pediatric Gastroenterology Clinic of Besat Hospital in Sanandaj in 2018-2019. Urine analysis and culture were performed for all the patients. Data were recorded in separate questionnaires.

Urinary tract infection was common in children with chronic constipation. There was no relationship between the duration of constipation and the frequency and type of UTI.

Constipation refers to bowel movements fewer than twice a week. According to the definition, chronic constipation should have two or more of the following symptoms for at least three months: Excessive strain during a bowel movement, stiffness in stool consistency, feeling incomplete excretion after a bowel movement, and defecation less than twice a week (1-3). Various studies have shown the interaction between the function of the urinary system and the intestine. The association between the bladder and intestine is evident through the presence of urinary symptoms in patients with irritable bowel syndrome and the presence of intestinal symptoms in patients with acute cystitis. Gastrointestinal disorders such as constipation can lead to lower urinary tract symptoms, including bladder hyperactivity (4). The embryonic origin of the bladder and rectum is the same, and their autonomic and somatic innervations are similar. Due to the proximity of these two organs, the dysfunction of one of them can affect the other. Therefore, defecation disorders can be associated with urinary tract problems.

Studies in children have shown that constipation is associated with urinary tract problems, including infection, urinary incontinence, vesicoureteral reflux, and urinary tract obstruction. The underlying pathophysiology of these findings has not yet been elucidated (5). A study showed that an increase in rectal diameter is associated with a high frequency of urinary tract infections (6). Another author depicted that the treatment of constipation resulted in significant urinary control (7). Some researchers found that the prevalence of constipation was 8% in children with UTI, and the prevalence of recurrent UTI was 67.8% in children with constipation. A significant relationship was found between recurrent UTI and constipation (8). Previous publications have not indicated any association between constipation duration and the frequency of UTI and its upper and lower types (cystitis and pyelonephritis).

The purpose of this study was to evaluate the link between constipation duration and urinary tract infection.

Informed consent was obtained from children or their parents. The questionnaires were filled out by parents. Each questionnaire consisted of demographic information including age, sex, place of residence, duration of chronic constipation, and history or presence of urinary symptoms (including dysuria, frequency, hematuria, abdominal pain, flank pain, and fever). All children were examined for UTI. For this purpose, a sterile urine sample was sent for analysis and culture. Urinary tract infection was considered when there were more than 105 colonies of one type of a pathogen or 104 colonies in symptomatic children with active urine (10). We considered fever as the main criterion for distinguishing upper and lower urinary tract infections (11, 12). Children with UTI were referred to the Nephrology Clinic for treatment. Appropriate treatment for chronic constipation was also prescribed. The study was approved by the Ethics Committee of Kurdistan University of Medical Sciences (Ethical Number: IR.MUK.REC.1397/162).

Data were analyzed using SPSS V. 22 software and descriptive statistics. After determining the prevalence of constipation and UTI and their 95% confidence intervals, the chi-square and independent t-tests were used to evaluate the study hypotheses. P values of less than 0.05 were considered statistically significant.

Constipation is a common gastrointestinal problem in children that can impose huge costs on society. This problem is a major complaint in 3% of referrals to physicians’ clinics and 10% - 25% of referrals to pediatric gastroenterologists. It is, therefore, a major problem for both patients and families (13). Considering the high prevalence of UTI and constipation in children, as well as the complications of UTI on the developing kidney, it is important to investigate the causative and exacerbating factors. On the other hand, constipation is one of the possible contributing factors to the development and recurrence of UTI. However, there are controversial results about the role of bowel dysfunction in urinary disorders such as urinary reflux, UTI, and urinary incontinence. We found that the frequency of constipation was highest in the group of 3 - 6 years (54.09%). Hakimzadeh et al. showed that most cases of constipation were in the group of 2 - 7 years (84.47%) (8). In the Sampaio study, the mean age of the patients was nine years (7 - 11 years) (14). This difference may be related to the difference in the participants’ age in the studies (1 - 12 years vs. 5 - 17 years). The most common age group of constipation patients was between one and five years in Sarvari’s study (15). According to our results, about 16% of children with chronic constipation also had UTI. This rate was reported as 67.8% by Hakimzadeh et al. (8) and 27% by Sampaio et al. (14). These studies suggested a significant association between UTI and constipation. Sampaio demonstrated that children with constipation were about seven times more likely to have inferior UTI, and there was a significant association between the two diseases. Sarvari et al. reported a 13.3% UTI prevalence in children with constipation (15). According to our results, there was no relationship between the frequency of UTI, its types (upper or lower infection), and the duration of constipation (P value = 0.450). Since no previous studies have examined this relationship, we could not compare our findings with others. More than half of the patients in our study were boys, while in other studies, constipation was more common in girls (8, 14, 16). This difference may be due to differences in race and culture. In some areas, boys are more than girls. The majority of patients in our study were from urban areas. The justification for this discrepancy is that urbanites are more likely to see a doctor for treatment than rural people. The most common clinical manifestations of UTI were frequency, dysuria, abdominal pain, and fever. Dehghani et al. also reported that the most common symptoms were dysuria and frequency (16). In the Sarvari et al. study, the most common manifestations of UTI were fever, dysuria, and frequency (15). The results of urinalysis and culture vary among different studies. Dehghani et al. exhibited abnormal urine analysis in 8.3% and positive urine culture in 5.8% of patients (16). In the Sarvari et al. study, the urinary culture was positive in 13.3% (15). We found that urinalysis was abnormal in 14.55%, and urine culture was positive in 8.18%. We noted that lower UTI was more common than upper UTI. This may be due to the anatomical association between the bladder and rectum, so cystitis and lower UTIs were more common in these children. In our study, UTI was more common in girls. Many studies are consistent with our results and showed that UTI was more frequent in girls (8, 15). This can be due to the shortness of urethra in girls and the anatomical abnormalities such as labia majora adhesion. The UTI was mostly found in the age group of 3 - 6 years. Hakimzadeh et al. depicted the highest incidence of UTI in the age group of 2 - 7 years (8).

We thank the honorable research vice-chancellor of the University and the Faculty of Medicine of Kurdistan University of Medical Sciences, and the staff of Besat Hospital, who assisted us in this research. Also, we appreciate the cooperation of Dr. Diana Diaz with writing this article.