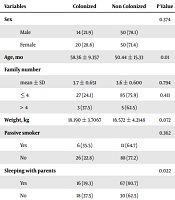 Staphylococcus aureus is a gram-positive coccus bacterium responsible for a wide spectrum of human infections. The main colonization site for S. aureus in humans is the anterior nares. Health care workers (HCW) are commonly colonized with resistant microorganisms; however, it is not clear whether close contact with HCW is a risk factor for colonization with resistant microorganisms.

The aim of the study was the determination of the risk of methicillin-resistant Staphylococcus aureus transmission from colonized parents to their children via daily contact.

This was a cross-sectional study conducted in Hamadan city, the west of Iran, between October 2016 and March 2017. We defined two groups for our investigation. The first group included 1 - 6 years old children who their mother, father, or both were health care workers (HCW) in university-affiliated hospitals of Hamadan University of Medical Sciences, and the second group consisted of children whose parents were not health care workers. Both groups attended day care centers. One hundred and thirty-four children were enrolled in this study, from which 67 had HCW parents, and 67 had non-HCW parents.

S. aureus colonization rate among children of HCWs was 17.9 % (12/67), and in children of non-HCWS was 32.8% (22/67). The colonization rate was not significantly different between these 2 groups (P = 0.052). Of all the S. aureus isolates, one methicillin-resistant isolate and one clindamycin-resistant isolate were observed. The D-test was positive in 12.1% of clindamycin sensitive isolates

We recommend the use of anti-staphylococcal penicillin or first-generation cephalosporins in cases of non-life-threatening staphylococcal infections and clindamycin for MRSA infections. Regarding to our results, there is no difference in the choice of antibiotic between children of health care workers and other children. We also recommend avoiding switching therapy from erythromycin to clindamycin.

Staphylococcus aureus is a Gram-positive coccus bacterium responsible for a wide spectrum of human infections, including skin and soft tissue infections, pneumonia, endocarditis, bacteremia, and sepsis. The main colonization site for S. aureus in humans is the anterior nares (1-3). Overcrowding in school and preschool centers has been reported as a major risk factor. This asymptomatic nasal colonization may lead to various diseases, especially in conditions like hospitalization or low immunity. S. aureus has become resistant to many available antibiotic classes, including beta-lactams (4-7).

Risk factors for MRSA colonization and infection include the presence of an invasive device at the time of the infection, history of MRSA infection or colonization, history of surgery, hospitalization, and dialysis (8, 9). Several studies showed increasing rates of nasal carriage of MRSA in healthy children (10). CA-MRSA is responsible for skin and soft tissue infections and severe invasive pneumonia, but life-threatening conditions are also reported. On the other hand, MRSA colonization occurs more frequently among health care workers (HCW) due to patient contact and contaminated environmental surfaces and they can transmit MRSA to other people and provoke CA-MRSA (11). Since most S. aureus infections originate from the nose of people and these individuals are potentially at risk of serious infections, studying the risk factors of colonization can lead to infection control and eradication, and in the next step, results in appropriate treatment and prevention of antibiotic resistance (12).

The main objective was to study the MRSA colonization rate among 1 - 6 years old children of HCWs (as a risk factor) attending day care centers and compare it to children of non HCWs.

This was a cross-sectional study conducted in Hamadan, the west of Iran, between October 2016 and March 2017. We defined two groups for our investigation. The first group included 1-6-year-old children whose mother, father, or both were HCW and worked in hospitals, and the second group included children whose parents were not health care workers. Both groups attended day care centers. We distributed a questionnaire about the marital status and the number of children among all of the personnel of the mentioned hospitals to determine the first group. We explained the purpose of our study to the parents of eligible children and obtained written informed consent and the address of the day care center from cooperative parents. We matched the two groups in terms of sex, age, and day care center. On the day of sampling, a second questionnaire was filled by all parents of participants including age, family size, parental smoking, sleeping habit of children, and history of breastfeeding. We also cheeked these items: recent antibiotic usage (last 2 weeks), long term glucocorticoid consumption (more than 2 weeks), any underlying systemic or chronic disease, recent and severe acute illness, history of recent hospital admission in the child or his/her first-degree family, immunodeficiency status and history of staphylococcal infection and a chronic wound. Children with any of these conditions were excluded from the survey.

We applied a wet sterile cotton swab gently to both nostrils and then inserted into transport media and transferred to the microbiology laboratory of the medical faculty in less than 3 hours. The specimens were cultured in sheep blood agar (Merck, Germany) and incubated at 35°C for 24 ‐ 48 hours. Gram staining, catalase, coagulase, DNase, and mannitol salt agar assays were done to identify S. aureus isolates (1, 13).

An antibiotic susceptibility test using the disk diffusion method was performed on isolates of S. aureus according to guidelines of the Clinical and Laboratory Standards Institute (CLSI) (14). Oxacillin (1 µg), erythromycin (15 µg), clindamycin (2 µg), cefazolin (30 µg), and vancomycin (30 µg) disks (Himedia, India) were used to determine the susceptibility of isolates. An approximation test was performed for evaluating the inducible clindamycin resistance (ICR). If the zone of inhibition around the clindamycin disk on the side facing the erythromycin disk was flattened (D shaped), the isolate was reported as having inducible clindamycin resistance (positive D-test) (14, 15). The data were analyzed by SPSS version 16 software. Chi‐square and fisher’s exact test were applied for statistical analysis.

Detailed data about gender, age, family population, weight, history of breastfeeding, sleeping habits of children, and parental smoking, among colonized and not colonized children of HCWs and non-HCWs are listed in Table 1. S. aureus colonization risk factors among all of the children (not respective to their parent’s job) were studied; results are shown in Table 2. Among 12 colonized children of HCWs, and 22 colonized children of non-HCWs, antibiotic susceptibility pattern was studied; the results are shown in Table 3. For statistical analysis, semi sensitive and resistant cases were integrated, and antibiotic susceptibility patterns were compared in 2 groups of children. Significant differences were not seen in any of the six studied antibiotics (Table 3).

Table 2. S. aureus Nasal Colonization Risk Factors Among all of the Participantsa

For clindamycin sensitive colonies (33 ones), erythromycin induced clindamycin resistance test (D-test) was done and compared between 2 groups of children. It was positive in 12.1% of all colonies. The comparison of the D-test between children of HCWs and non-HCWs was done and it was not significant (Table 4). Additional information is shown in Table 4. Among colonized individuals, risk factors between sensitive and resistance cases to 5 antibiotics was compared separately. None of them were significant.

Table 4. Frequency of Induced Clindamycin Resistance in Children of HCWs and Non-HCWsa

Also, 17.9% and 32.8% of HCW’s and non-HCW’s children were S. aureus nasal carriers respectively, which was not a statistically significant difference. Shetty et al., in 2011 in India, had studied the relationship between S. aureus colonization rate and HCW contact as a risk factor; that was not significant too (19-21).

In this study, methicillin, clindamycin, and vancomycin-resistant S. aureus was only seen in one girl, whose father was a HCW. Thus resistance to these three antibiotics in children of our region is low and equal to 2.4%. Erythromycin and co-trimoxazole resistance rates were 14.7% and 8.8%, respectively. Therefore, the highest antibiotic resistance was to erythromycin (41.2% were sensitive, and 44.1% were semi sensitive). In a previous study done in Hamadan in 2008, MRSA prevalence in healthy children was 4.1%, and resistance to erythromycin was 6.8%, and there was not any vancomycin and clindamycin resistant isolates (16). In another study done in Hamedan in 2007, CA-MRSA prevalence in less than 12 years old children was 13.7%, and resistance to erythromycin, clindamycin, and vancomycin were 33.3%, 11.1% and 0%, respectively (15). In contrast, in Gorgan and Kashan, MRSA prevalence was 34.8%, and 35.9% and vancomycin-resistant S. aureus (VRSA) prevalence were 1.7% and 4.3%, respectively (18, 22). On the other hand, from 4 to 6 years old healthy children in Turkey, 0.3% had MRSA and all of them had HCW parents (19). This rate of prevalence is obviously less than reported ranges in Iran.

D-test positiveness rate was seen in 12.1% of clindamycin sensitive isolates, which was not significantly different between the 2 groups of children. It was reported 6.8% and 37.5% in previous studies done in Hamedan (15, 16).

In our study, there was no significant difference in S. aureus nasal colonization between girls and boys. This is supported by some national and international studies (18, 22, 23). However, in Sedighi et al. (16) and some other surveys, the male gender contributed to a higher rate of colonization.

In this study, S. aureus colonization increased significantly in older-aged children; the same result was observed with a Gorgan survey (22). Older age was also a risk factor among children of HCWs and non-HCWs. In contrast, age less than 4 years old in Kashan and less than 6 years old in India were colonization risk factors (17, 21). In the present study, the weight of children and their family population do not significantly affected S. aureus colonization. However, in some studies, greater family size resulted in a higher rate of colonization (17, 21).

History of breastfeeding did not result in a different rate of colonization, however, it was near significant (P = 0.065). However, in children of non-HCWs, it resulted in a lower rate of colonization. In our study, having smoker parents did not result in more colonization, in contrast to a survey in Kashan (17). However, we obtained this outcome only in children of non-HCWs. It was interesting that sleeping of children next to their parents resulted in a lower range of colonization; however, it was not a risk factor. Therefore, according to the present study, S. aureus nasal colonization rate among children attending daycare centers in Hamadan is notable and is not associated with the parent’s job. Although initial empiric treatment for staphylococcal infections depends on several factors, the most important factor is the drug resistance pattern in the community. For non-life-threatening infections like septic arthritis without signs of sepsis, if MRSA prevalence in the area is low (< 10%), anti-staphylococcal penicillin-like nafcillin, oxacillin or first-generation cephalosporins like cefazoline can be used. If MRSA prevalence in the community is high (> 10%) clindamycin can be used only if resistance to clindamycin is less than 10%; and if it is more than 10%, vancomycin should be substituted as first-line treatment (24).

In conclusion, MRSA prevalence among children of our area is less than 10%, we therefore recommend to pediatricians of our region, to use anti-staphylococcal penicillin or first-generation cephalosporins in non-life-threatening staphylococcal infections in order to prevent antibiotic resistance and if MRSA infections are suspected. With respect to low clindamycin resistance in Hamedan (2.4%), this antibiotic can be a good choice. With respect to the mentioned issues and regarding our results, there is no difference between children of health care workers and other children. But because of the high ICR rate (12.1%), it is strongly suggested to use D-test routinely in hospital laboratories, and clindamycin be prescribed only in negative ones. We also recommend avoiding switching therapy from erythromycin to clindamycin.

The authors would like to acknowledge the vice-chancellor of Hamadan University of Medical Sciences for funding and supporting the current study.