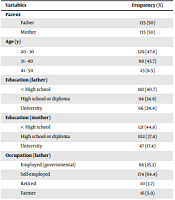 Assessment of Parents' Awareness of Urinary Tract Infections (UTIs) in Infants and Children and Related Demographic Factors: A Cross-sectional Study

Urinary tract infection (UTI) is the second most common infection in children. Parents’ lack of awareness and information about UTIs ultimately leads to delayed referral for treatment, which raises many concerns in parents.

The research aimed to evaluate the parental awareness of UTIs in infants and children and related demographic factors.

In this cross-sectional analytical study, 270 parents who had a child or infant with UTIs referring to the Nephrology Clinic of Mohammad Kermanshahi Hospital in Kermanshah, Iran, in 2018 were selected by a convenience sampling method. To analyze the data, the chi-square test and Fisher's exact test were used.

Given the results, educational programs must be promoted to raise parents' awareness of UTIs in infants and children, especially UTI symptoms in lower educated, elderly parents whose other children have not had any history of UTIs.

Urinary tract infection (UTI) is one of the most common infectious diseases in childhood (1) that accounts for 7% of visits to the doctors’ offices, 5 - 14% of cases referring to the emergency departments (2), 20% of all medical consultations, and 5.3% of infant visits to emergency rooms (3, 4). About 8% of girls and 2% of boys develop UTIs once around the age of 11. Almost 75% of infants less than three-months-old with bacteriuria are male compared to only 10% between the age of three and eight months (5). The wide range of symptoms and high prevalence of this disease are major causes of concern for parents, doctors, and health workers. The prevalence of UTIs varies according to age, sex, race, region, and culture (6). The disease prognosis depends on some factors, including the site of involvement, the severity of symptoms, and disease complicating factors (7).

One of the most common types of classification is based on the site of involvement, which is divided into upper (pyelonephritis) and lower (cystitis) involved parts. The most common symptoms of UTIs in children younger than three months of age are nonspecific and include fever, nausea, restlessness, and prolonged jaundice. The symptoms may also be manifested by weight loss and malnutrition and less likely by hematuria and dysuria. Fever is one of the most common symptoms in infants older than three months. In addition, with an increase in age, some symptoms may appear, including abdominal pain, flank pain, hematuria, dysuria, and recurrent UTIs that prevent the infant from gaining weight (8).

About 20% of children with UTIs have recurrent symptoms. Recurrent UTI prevention can contribute to the subsequent prevention of further important complications such as renal parenchymal scars, growth disorders, and high blood pressure. All of these factors can lead to a reduction in parental anxiety and stress (9). Indeed, not all patients with UTIs are equally important, and in some high-risk patients, such as those with congenital anomalies of the urinary tract, delayed diagnosis can lead to the development or progression of irreversible kidney damage in children. This results in more challenging management in later stages. Thus, the two most important steps in managing a child afflicted with a UTI are the proper diagnosis and timely treatment (10). Because parents are the ones in direct contact with their children and infants, it is of high significance to receive sufficient information about UTIs, and physicians should trustfully make the parents informed of the duration and symptoms of the disease (8).

When a child becomes ill, the parents become anxious. This concern affects their understanding of the illness and how to deal with it. In some cases, this concern and misunderstanding of parents about the disease can cause a rift and disagreement between the doctor and the patient's parents, and this, in turn, affects the course of treatment. Misconceptions and negative attitudes of parents towards their child's illness, often caused by their lack of awareness, can endanger their child's general health (11, 12). Studies show that parents with clearer and realistic attitudes toward their child's illness elicit more sensible reactions than parents with a less favorable attitude (12). On the other hand, the parents' knowledge of the disease can significantly facilitate and hasten child treatment, prevent the recurrence of the disease, or contribute to more facile handling of behavioral or emotional problems (13). The studies also show that whatever the parents are more informed of the nature of their child's illness, the treatment process progresses more facile (12, 14).

Some effective factors, including a high prevalence of UTIs in infants and children, emergence of different symptoms in them as a critical factor in the difficulty of diagnosis, and lack of parents’ sufficient knowledge of the disease can cause irreversible complications. Accordingly, the present study aimed to investigate the extent of parental awareness of UTIs in infants and children and related demographic factors.

A cross-sectional analytical study was conducted to investigate the factors related to the parental awareness of UTIs in infants and children and related demographic factors. The statistical population comprised all parents with infants or children with UTIs who were referred to the Nephrology Clinic of Mohammad Kermanshahi Hospital (Kermanshah University of Medical Sciences, Iran) in 2018.

Considering the study design (cross-sectional) and parental awareness of UTIs (89%) obtained from the research performed by Owen et al. (15), as well as given a 95% confidence level and 4% accuracy, we used the formula , considered a dropout rate of 15%, and calculated the minimum sample size of 270 people among the parents of the afflicted children. The research sample included the parents who met the inclusion criteria, were volunteer participants and were selected by convenience method.

The UTI diagnosis was based on clinical signs, urinalysis results, and urine culture. Clinical symptoms in older children included dysuria, urgency, and frequency. General symptoms in infants and neonates included weight loss, restlessness, and poor feeding. Urine culture is the gold standard for the diagnosis of UTIs (3, 16, 17). In the urine samples collected by the suprapubic method and urinary catheters, if the urine culture shows a colony count of > 50,000 from a single pathogen or a symptomatic patient, the colony > 10,000 proves a UTI (16).

In the case of the bagged urine collection method applied to symptomatic patients with positive urinalysis results, urine culture with more than 100,000 single microorganisms was considered as a UTI. However, according to the American Academy of Pediatrics (AAP)/Clinical Practice Guideline (2011), the preferred method of urine collection for children younger than the toilet training age is the suprapubic method or urinary catheters (6, 15).

Determining factors in interpreting children’s urinary culture include the presence of UTI symptoms, urine sample collection techniques, and reliability of microbiological techniques (16). According to another nephrology reference, if the colony count is > 1000 Colony Forming Units (CFU)/mL of positive gram cocci and any number of Gram-negative bacilli is obtained via the suprapubic method, the diagnosis of UTIs is documented with 99% probability. In a sample obtained via catheterization, a colony count of > 105 CFU of a single organism/mL gives a 95% probability of UTIs. A sample obtained by clean catch, with ≥ 105 CFU of a single organism/mL, gives an 80% probability of UTIs (18).

Based on the research methodology, after explaining the research objectives and obtaining written informed consent, the qualified volunteer parents participated in the study and were given sufficient time to complete the relevant form and questionnaire.

Demographic information included information on parents (age, gender, marital status, education, occupation) and information about their sick child (age, gender, the child with a history of UTI, and the number of children), which was completed by asking some questions from the children parents.

Since the items had two choice options, the Kuder-Richardson (KR20) method was used to

determine reliability using the below formula.

This method evaluates the internal consistency, i.e., the degree of interference of all items in terms of measuring the common feature of awareness. Here, k is the number of the items in the questionnaire, pi is the ratio of true answers to item i, and qi is the ratio of false answers to item i, and S2 is the variance of the total awareness index, which was calculated according to software analysis equal to 43.412. Further, the content validity and scientific significance of the questionnaire were confirmed by the relevant experts.

The Research Council and the Ethics Committee of Kermanshah University of Medical Sciences, Iran, approved the study (registration No. IR.KUMS.REC.1395, 740, February 22, 2017; grant number 96243). This research was performed in compliance with the ethical principles laid down in the seventh and current edition (2013) of the Declaration of Helsinki. All participants were volunteers who signed written informed consent.

To determine the distribution of parental age, gender, marital status, parental education, parental occupation, affected child age and gender, history of UTIs, number of children, parental awareness of symptoms, complications, treatment, prevention and epidemiology, diagnosis, and parental general knowledge of UTIs in infants and children, we used descriptive statistics including the frequency and percentage. To determine the gender, the average age of parents and afflicted children, and the number of afflicted children, descriptive statistics were used, including the number, minimum, maximum, mean, average, and standard deviation. Finally, the Chi-square and Fisher's exact tests were used to evaluate the relationship of age, gender, parental education, and UTI history of the child with parental awareness of symptoms, complications, treatment, prevention and epidemiology, and diagnosis, as well as the overall parental awareness of UTIs in children and infants. All analyses were performed using SPSS 20 at a 5% error level.

Table 2. Frequency and Percentage of Demographic Characteristics of Parents and Their Sick Children

The parental awareness of symptoms, complications, treatment, prevention, and diagnosis of UTIs in children was reported at three levels: low, medium, and high. Accordingly, this awareness was observed in the maximum number of study participants at high, medium, and low levels, respectively. However, in the case of symptoms of UTIs, the average parental awareness had the highest frequency. On the other hand, for all the concepts studied, the level of poor awareness had the lowest frequency (Table 3).

aComponents of parental knowledge of UTIs in children

The results showed a statistically significant relationship between paternal education and knowledge about treatment and diagnosis and also the overall score of his knowledge on UTIs in children (P < 0.05). There is also a statistically significant relationship between the maternal education level and the awareness of the symptoms and how to prevent UTIs (P < 0.05) (Table 4).

Table 4. Results of Relationship Between Parents' Education and Parental Knowledge About UTIs a

aComponents of parental knowledge of UTI in children

According to Table 5, the results indicated a statistically significant relationship between the history of UTIs in children and the parents’ level of awareness of how to prevent and diagnose UTIs in children (P < 0.05) (Table 5).

Table 5. Results of Relationship Between Histories of UTIs in Children and Parental Knowledge About UTIs

aComponents of parental knowledge of UTI in children

The present study aimed to investigate the parents’ awareness of infants and children with UTIs and related demographic factors. The results showed that the awareness score was medium among 37% of the parents and desirable among 63%. Based on the answers to the awareness items, most parents were sufficiently informed of the underlying causes of UTIs and symptoms, and the awareness of complications, treatment, prevention, and diagnosis of UTIs was high. In the research performed by Baghiani Moghadam et al. (19) the awareness of UTI symptoms was acceptable among 2.9% of the mothers and moderate among 96.4%. In a study carried out by Owen et al. (15), the parental awareness of UTIs was low, and 85.6% of the parents required more information about the disease and how to identify it. In a study by Harmsen et al. (20), the parents could not continuously detect UTIs in their children and remained often uninformed of their possible consequences and thus, the parental awareness was low.