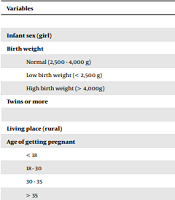 Reducing infant mortality in the whole world is one of the millennium development goals.The aim of this study was to determine the factors related to infant mortality using data mining algorithms.

This population-based case-control study was conducted in eight provinces of Iran. A sum of 2,386 mothers (1,076 cases and 1,310 controls) enrolled in this study. Data were extracted from health records of mothers and filled with checklists in health centers. We employed several data mining algorithms such as AdaBoost classifier, Support Vector Machine, Artificial Neural Networks, Random Forests, K-nearest neighborhood, and Naïve Bayes in order to recognize the important predictors of infant death; binary logistic regression model was used to clarify the role of each selected predictor.

In this study, 58.7% of infant mortalities occurred in rural areas, that 55.6% of them were boys. Moreover, Naïve Bayes and Random Forest were highly capable of predicting related factors among data mining models. Also, the results showed that events during pregnancy such as dental disorders, high blood pressure, loss of parents, factors related to infants such as low birth weight, and factors related to mothers like consanguineous marriage and gap of pregnancy (< 3 years) were all risk factors while the age of pregnancy (18 - 35 year) and a high degree of education were protective factors.

Infant mortality is the consequence of a variety of factors, including factors related to infants themselves and their mothers and events during pregnancy. Owing to the high accuracy and ability of modern modeling compared to traditional modeling, it is recommended to use machine learning tools for indicating risk factors of infant mortality.

In this study, we used data mining techniques to extract hidden information from a large volume of data and to predict risk factors related to infant mortality (9). Machine learning or data mining is defined as enabling computers to produce evidence for successful decision-making based on past experiences. In recent years, a rapid increase in storage capacity and processing power helped machine learning to exhibit an impressive development (10). Advances in data analysis methods contributed to machine learning enables computers to make an accurate and reliable prediction using even a very small sample size (11). Machine learning techniques such as Decision Trees (DT), Support Vector Machines (SVM), K-Nearest Neighbors (KNN), Naïve Bayes, and Artificial Neural Network (ANN) have been used for classification and prediction about detection, treatment, morbidity, and mortality among patients or population (12).

This population-based case-control study was conducted in eight provinces of Iran, including Fars, Golestan, Hormozgan, Kohgiluyeh, and Boyer-Ahmad, South Khorasan Kermanshah, Hamedan, and Yazd in 2017. In a stratified cluster random sampling, eight out of 31 provinces from North, East, West, South, and center of Iran were selected. Then five districts were chosen again from North, East, West, South, and Center of each selected province. Thereafter, we randomly selected one urban and one rural health center from each sampled district. According to literature review, considering mother’s education < 5 years as a risk factor (P0 = 0.58, P1 = 0.68, Z0.95 = 1.96, Z(1-β) = 0.90, design effect = 2) and using sample size formula for comparison of proportions, the sample size was estimated as 508 for each of case and control groups. By taking design effect = 2 into account, the sample size for each group reached 1,016. We added some more samples to replace the probable incomplete data. The final sample size was 2,386 (1,076 cases and 1,310 controls). The case group included mothers who had lost an under one-year-old child due to disease or congenital disorder. The control group included mothers who had at least a live child with the age of less than one and had not experienced infant death. Subjects in case and control groups were randomly selected from mothers who were referred to the chosen health centers. Data were collected using researcher-made checklists from mother’s health records. Participants with poor reading or writing skills were interviewed face to face by a trained interviewer to complete the checklist. Checklists included data of demographic status and diseases or disorders as well as the history of mothers and their children.

Data accuracy and disparities were evaluated. In this study, the outcome variable was considered vital status of infant, while predictor variables included demographic status of mother, history of diseases, events during pregnancy, violence or trauma on mother, and medical records of mothers and their infants such as sex, birth weight, and so on. We employed several data mining algorithms such as AdaBoost classifier, Support Vector Machine (SVM), Artificial Neural Networks (ANN), Random Forests (RF), K-Nearest Neighborhood, and Naïve Bayes to recognize the important predictors of infant death. Sensitivity, specificity, classification accuracy, and F1 score with the following formulas were used for measuring and comparing the performance of the classification methods.

After recognition of important predictors, the binary logistic regression model was used to clarify the role of each selected predictor. Area under receiver operating characteristic curve (ROC AUC) and Hosmer-Lemeshow test were used to measure the calibration and discrimination ability of models.

Data analyses were carried out using STATA-Version 14 and Python 2.7. IDLE software, and the significance level was considered P < 0.05.

In the case group, 14.2% of mothers were over 35 years old at the time of pregnancy compared to 8.8% in the control group. A total of 52.4% of dead infants were boys. Consanguineous marriage among subjects who had experienced infant death (33.6%) was more prevalent than subjects who had no such experience (25.6%). A total of 4.82% of mothers reported smoking during their pregnancy, and a total of 25.4% of them reported a history of diseases such as anemia, and 5.4% of them had diabetes during their pregnancy. The characteristics of the study subjects in case and control groups are shown in Table 1. After running six data mining algorithms, variables that gained an acceptable importance score were identified.

Table 1. Demographic Characteristics of Subjects in Case and Control Groupsa

For better comparison, we used seven statistical models (logistic regression and six data mining models) for the prediction of outcome using all 16 important predictor variables. The results of model effectiveness shown in Table 2 represent that Naïve Bayes and Random Forest had the highest AUC, F1-score, precision, and sensitivity among data mining algorithms, respectively. These algorithms had high power in predictions of related factors among data mining models (Table 2). The impact value and Odds ratio of each variable using univariate and multivariate regression models are represented in Table 3. Logistic regression model showed the adjusted Odds ratio of consanguineous marriage as 1.44 (95% CI: 1.18-1.76), short pregnancy gap or first pregnancy, worst life event as 1.65 (95% CI: 1.36-2.00), dental disorders as 2.49 (95% CI: 1.90-3.27) and high blood pressure during pregnancy as 1.62 (95% CI: 1.11-2.38) and neonatal weight of under 2500g as 8.13 (95% CI: 6.34-10.42) significantly increased the risk of infant mortality. On the other hand, maternal age of 18-30 and 30-35 years old and mother’s literacy (high school and university degree) all acted as protective factors for infant mortality (Table 3).

Finally, variables like infant's sex, twins, smoking during pregnancy, gestational diabetes, gestational anemia, living place (urban or rural), mother's job, and psychological symptoms during pregnancy were all indicated as important factors related to infant mortality, but in the logistic regression model, a significant relation was not found considering these factors. Missing data due to incomplete checklist and response bias and underestimation due to unwillingness of participants to report factors with strong social stigma among women such as smoking were the limitation of the study.

Infant mortality is a multifactorial outcome, which includes infants, mothers, and events during pregnancy. Events during pregnancy such as dental disorders, high blood pressure, and loss of parents, factors related to infants such as low birth weight (< 2500 g), factors related to mothers like consanguineous marriage, and gap of pregnancy (< 3 years) were risk factors, while the age of pregnancy (18 - 35 year) and a high degree of education were protective factors. Thus due to the high accuracy and potency of modern modeling similar to traditional modeling (logistic regression models), we can use machine learning for indicating related factors to infant mortality; consequently, these factors can be prevented.

The authors would like to thank the medical sciences universities and health centers of eight provinces who participated in this project and provided their services with dedication.