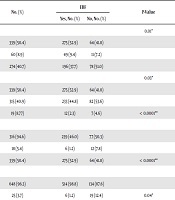 Exclusive Breast Feeding and Its Determinants in Infants Born in Zanjan Hospitals: A Longitudinal Study

Exclusive breastfeeding (EBF), especially during the first six months of life, is one of the primary health indicators in infants.

The present study intended to describe the frequency of EBF in infants and its determinants until six months after birth.

This longitudinal study was conducted on 673 mother-newborn pairs visiting obstetrics and gynecology departments of two main hospitals in Zanjan. Information on the frequency of EBF up to six months, socio-demographic and reproductive information, and attitudes of mothers towards breastfeeding was gathered using questionnaires. Data were analyzed using chi-square test and logistic regression in SPSS.

In this study, despite a high proportion of EBF at discharge, we found that the proportion of EBF reduced during six months. The determinants of non-EBF at six months, including urban and less educated mothers, highlight a need to promote awareness regarding EBF and perform interventions for women at a greater risk for early breastfeeding cessation.

Exclusive breastfeeding is a substantial supply of nutritional intake and immunological needs for an infant, which plays a pivotal role in improving mental health (15, 16). Breast milk contains unsaturated fatty acids necessary to develop a child’s brain (17). Also, it is associated with improved motor and cognitive developments (18). The role of breastfeeding in the prevention of infantile infectious diseases is well-documented (19). Exclusive breastfeeding throughout the first six months of life has other advantages, such as helping to increase the mother’s bond with their infants, decreasing postpartum hemorrhage, and having an earlier return to pre-pregnancy weight (13).

An estimate from the Bellagio child survival study (based on the findings of systematic reviews from low and middle-income countries) projected that exclusive breastfeeding during the first six months and continued breastfeeding throughout the first year of life could avert up to 1.4 million mortalities in children under five years old (20).

Several studies have been conducted both inside and outside Iran on exclusive breastfeeding in the first six months of infancy. Most studies were of retrospective or cross-sectional design. Olang et al. reported that national EBF rates at 4 and 6 months of age in Iran were 56.8% and 27.7%, respectively. This rate at four months of age in rural areas is 58%, whereas in urban areas, it is 56% (21).

Regarding the importance of exclusive breastfeeding, this prospective study was performed to determine the frequency of EBF up to the end of six months in Zanjan and to identify the factors that reduce EBF in this population.

This longitudinal study was conducted among 673 mother-newborn pairs in Zanjan (northwest of Iran). All mothers visiting obstetrics and gynecology departments of two main hospitals (Mousavi and Imam Hossein) in Zanjan, between March and May 2009, were eligible. Mothers who were less than 14 years old and newborns who weighed < 2500 g, had a medical problem, or needed special care were excluded. The emphasis of this study was the frequency of EBF up to the end of six months as an outcome.

The sample size was calculated assuming a 95% confidence interval (CI) and the proportion of exclusive breastfeeding in Iran (44%) (22). Based on this, 592 samples were estimated. The number of subjects increased to 700 to confront the probable loss of participants during the six months of follow-up. Mothers of these 700 infants were recruited in the study using a simple random sampling method. Twenty-seven mothers (21 due to immigration and 6 due to lack of cooperation) were lost to follow-up during six months, and data for 673 mothers were analyzed (3.9% loss to follow-up). The Ethical Committee of Tehran University of Medical Sciences approved this study (code: 24/1991, 1388.04.20), and written consent was obtained from all the mothers before the study.

Two types of questionnaires were used in this study. The first questionnaire consisted of items on socio-demographic information (i.e., parents’ residential area, mother’s age, mother’s academic level, mother’s occupation, mother’s medication, mother’s health history, father’s academic level, father’s occupation, and family size), reproductive and postpartum history (i.e., gravidity, parity interval, breastfeeding history, mother’s decision to breastfeed, type of delivery, mother and infant skin to skin contact, the interval between birth and breastfeeding, and pacifier use) and variables related to the information and attitude of the mother concerning the benefits or difficulties of breastfeeding. These data were gathered through face-to-face interviews with mothers at study entry.

The second questionnaire included information on the status of the infant’s breastfeeding and other related factors that was completed via phone calls with mothers at the 2nd, 4th, 16th, and 24th weeks.

Values were expressed as numbers (percentages), and comparisons were made using the Fisher’s Exact and chi-square tests for binary and categorical variables. Logistic regression models were applied to determine the association between study variables and non-exclusive breastfeeding. All the variables that were significantly associated with non-exclusive breastfeeding (P < 0.05) and those with a P-value less than 0.2 in the univariate analysis were included in the multivariate model. These variables include maternal age, maternal education level, maternal occupation, father’s occupation, parents’ resident area, gravidity, parity interval, breastfeeding history, mother’s decision to breastfeeding, type of delivery, mother and infant skin to skin contact, the interval between birth and EBF, pacifier use during the first six months of life, and knowledge of mother on infant breastfeeding while away from her. P-values less than 0.05 were considered statistically significant. Analysis of the data was performed via SPSS version 16.0.

The frequency of EBF in infants within their first six months of life is shown in Table 1. The proportion of EBF was almost 100% after birth; however, at discharge, 95.7% of the infants were exclusively breastfed. The rates of EBF in the second week and the 1st, 4th, and 6th months were 95.1%, 88.1%, 80.7%, and 77.3%, respectively. Fifty percent of those mothers who did not exclusively breastfeed their babies reported that it was due to inadequate milk production.

Table 1. Frequency of Exclusive Breastfeeding in the First Six Months of Infants’ Life

The distribution of EBF by parental socio-demographic factors is illustrated in Table 2. The risk of non-exclusive breastfeeding was significantly associated with lower education of mothers (P = 0.01), not having an occupation (P = 0.02), and living in urban areas (P = 0.006) (Table 2). The risk of non-exclusive breastfeeding was not associated with the age of mothers, father’s educational level, father’s employment, family size, or the health status or medication history of the mother.

Table 3. Distribution of Exclusive Breastfeeding by Reproductive and Postpartum Variablesa

Table 4. Distribution of Exclusive Breastfeeding by Knowledge and Attitudes of the Mother or Her Familya

In the multivariate analysis, the risk of non-exclusive breastfeeding was significantly and independently associated with parents’ residential area, maternal education, the interval between parities, breastfeeding history, prior decision concerning breastfeeding, and pacifier use during the first six months of life (Table 5).

The findings of this study display that the proportion of exclusive breastfeeding in Zanjan diminished from 96% at birth to 77.3% at the age of six months. This is similar to the results of other studies conducted in Iran, Jordan, and Ethiopia (23-25). A lower rate than that found in our study was observed in other studies. Veghari et al. (26) in the North of Iran reported that the EBF rate at six months was 66.4%. Olang et al. (21) reported an average of 27.7% at six months for EBF at the national level. The proportion of EBF in a study conducted in Mashhad was 56.4% (27).

A study in Zhejiang, China, was performed among 1520 subjects, and the exclusive breastfeeding rates right after hospital discharge and in the 1st, 3rd, and 6th months were estimated as 50.3%, 55.1%, 45.8%, and 3.9%, respectively (28). According to the WHO report, the proportion of children who were fed exclusively with breast milk for six months in Eastern Mediterranean countries, including Pakistan, Iraq, Saudi Arabia, and Egypt, were 16%, 25%, 31%, and 38%, respectively (29). The prevalence of EBF in a study in southwest of Nigeria was 19% (30).

In the United States, 37.1% of infants were breastfed exclusively for six months in Boston (31). Compared to these studies, the prevalence of exclusive breastfeeding in Zanjan was higher. Differences in culture, study population, and study design may have contributed to these variations.

In the present study, a significant association between the mother’s occupation and non-exclusive breastfeeding was observed. The proportion of non-employed mothers was higher among newborns with non-exclusive breastfeeding than those with EBF (17.6% versus 10.6). A similar finding has been observed in another study (34). In our study, in the multivariate analysis, this association did not remain significant after controlling the effect of other variables in the model. This may be due to the relation with other variables such as education.

The risk of non-EBF increased with increasing gravidity, but this was in univariate analysis, not in multivariate. In a recent study in Tanzania, no association between multiparity and EBF was observed (35). Type of delivery was also associated with an increased risk of non-EBF. Although this association was not independent in our study, but it was in accord with the results of a meta-analysis by Behzadifar et al. (36), who found an OR of 1.16 (0.98 - 1.37) for EBF when compared caesarean with vaginal delivery.

The results of our study indicated that the risk of non-exclusive breastfeeding was independently associated with living in urban areas. One study performed in Malaysia involving 682 pairs of mothers and infants up to six months of age, reported that EBF was positively associated with rural residence (38). This may be due to economic and social differences between urban and rural areas, everyday problems of living in urban areas, and mothers’ concerns about workplace and occupation after giving birth to their babies.

Another finding of this study was to find a significant relationship between mothers’ poor education and the EBF rate at the end of six months. Our study found that a lower level of maternal education is directly associated with the discontinuation of EBF within the first six months of infancy. Mothers with a higher level of education may be more educated on the benefits of breastfeeding. Similar findings were also conveyed in other studies (26, 39). However, in one study by Vafaee et al. (40), the proportion of EBF was lower for mothers with higher levels of education. In some populations, mothers with high levels of education and better economic and social status might presume that exclusive breastfeeding is an old and outdated method and prefer to feed their infants with formula.

We found a significant relationship between “pacifier use in the neonatal period” and the reduction of EBF. Also, some other earlier research indicated that pacifier use during the neonatal period harmed exclusive and overall breastfeeding (42, 43). However, a Cochrane review found that pacifier use starting at birth or after lactation in healthy term infants did not significantly influence the prevalence or duration of exclusive and partial breastfeeding until four months of age (44). Other studies indicated that the association among pacifiers, breastfeeding, and supplementation is more complicated than previously realized (45).

This study has several strengths. First is the longitudinal design of this study that ruled out the potential recall bias of many previous studies. Second is using a validated questionnaire, including reproductive and postpartum factors and variables related to mothers’ knowledge and family attitude. One limitation of this study was large odds ratios and wide confidence intervals. This might be due to the small observed counts in some of the cells, which increase the odds ratios. Hence, for any interpretation of these findings, the degree of precision should be considered.

This study indicated that the proportion of EBF was 95.7% at discharge, which reduced to 77.3% at six months. The multivariate analysis of data showed that living in urban areas, lower maternal education, having more than three years of birth interval, no experience of breastfeeding, no prior decision for breastfeeding, and the use of artificial nipples were independently associated with non-EBF. Therefore, the results of this study suggest a need for promotion of awareness regarding EBF and conducting interventions for women who are at greater risk of early breastfeeding cessation.