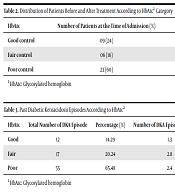 Microalbuminuria is thought to be an early predictor of impending diabetic nephropathy, while glycosylated hemoglobin (HbA1c) is a biochemical marker of long-term glycemic control in children with type 1 diabetes mellitus (T1DM).

The study aimed to evaluate the prevalence of microalbuminuria and its association with HbA1c on admission and duration of diabetes. Also, changes in HbA1c level on admission and three months after admission were studied to assess diabetes control in children with T1DM.

This prospective study was conducted among 38 children (< 18 years) diagnosed with TIDM presenting with clinical signs, symptoms, and biochemical parameters of DKA. The presence of microalbuminuria, HbA1c level, and the number of past episodes of DKA were recorded. HbA1c level was again estimated after three months. The resultant data was tabulated and analyzed statistically (P < 0.05).

Microalbuminuria assessment is needed in T1DM children, especially those with HbA1c > 9% and duration of diabetes > four years, to evaluate diabetic nephropathy. Good glycemic control can be achieved with effective insulin therapy accompanied by appropriate counseling and regular follow-up.

Type 1 diabetes mellitus (T1DM) is a chronic autoimmune disease characterized by elevated blood glucose levels resulting from insulin deficiency (1). The prevalence of T1DM in the Indian subcontinent is increasing, and it ranges from 3.7 to 10.2 per 100,000 population, with a higher prevalence in urban areas and in males (2).

Acute complications of diabetes such as hyperglycemia and diabetic ketoacidosis (DKA) are the prime causes of increased morbidity and mortality. However, microvascular and macrovascular changes cause significant mortality over time (3). Literature reveals that patients with DKA and those with nephropathy have higher mortality rates (4). Diabetic nephropathy usually develops approximately ten years post diagnosis of T1DM (5). Microalbuminuria is an early predictor of diabetic nephropathy and is associated with higher levels of glycosylated hemoglobin (HbA1c) (5). HbA1c is a biochemical marker that is used routinely in diabetic patients to monitor long-term glycemic control and assess the risk of developing complications.

Urine microalbumin and HbA1c play an important complementary role, and their availability for clinical use together with improvement in therapies would help improve metabolic control in diabetic children. However, there is a paucity of research and guidelines concerning the association of microalbuminuria and HbA1c in T1DM children, especially in Indian subcontinent.

This study aimed to evaluate the prevalence of microalbuminuria and its association with HbA1c on admission and duration of diabetes in DKA children. Also, changes in the level of HbA1c on admission and three months after admission were studied to assess diabetic control. Additionally, the study evaluated the correlation between HbA1c level and past episodes of DKA.

The prospective study was conducted at the Department of Pediatrics at a tertiary care hospital in Kolhapur, India from 1st January 2018 to 31st March 2020, after obtaining ethical clearance from the institutional Ethics committee. Thirty-eight children less than 18 years of age with debut or established T1DM admitted to the Pediatric Intensive Care Unit were recruited into the study after obtaining written informed consent from their parents/guardians.

The number of past episodes of DKA in each of the subjects was recorded. Microalbuminuria is defined as albumin to creatinine ratio (ACR) between 30 and 299 mg/g (7) However, it was assessed on the first morning using 5 mL of spot urine sample, collected in a clean plastic container. The ACR ratio was calculated in mg albumin/gm of creatinine. Urinary albumin was estimated by the immune-turbidimetric end-point method by using Bio Lab diagnostic reagents (8) Urinary creatinine was estimated by Jaffe’s method using Transasia Bio-Medicals reagents. (9) Microalbuminuria was confirmed by repeating the ACR ratio test after 48 hours using 5 mL of fresh morning’s first urine spot sample.

While testing for ACR, the patient was well-hydrated and afebrile to avoid false positivity for microalbuminuria. HbA1c was estimated by the high-pressure liquid chromatography method (Bio-Rad D10 model) by collecting 2 mL blood sample in an ethylenediamine tetra-acetic acid container at the time of admission and three months afterward during follow-up (10). It was standardized as per the National Glycohemoglobin Standardization Program (NGSP) (11). The American diabetic association guidelines suggest that target HbA1c level should be < 7.5% in T1DM children less than 18 years (12). The values of HbA1c were categorized for the purpose of this study as good control (6 - 7.5%), fair control (7.51 - 9%), and poor control (> 9%). Patients diagnosed with DKA were managed as per the International Society of Pediatric and Adolescent Diabetes (ISPAD) clinical practice consensus guidelines protocol 2018 (13). After successful management of acute DKA episode, at the time of discharge, all patients were advised to undergo treatment with basal bolus insulin therapy with appropriate counseling and regular follow-up every 15 days.

Data were analyzed using R Studio V 1.2.5001 software. Continuous variables are expressed in mean ± standard deviation (mean ± SD), while categorical variables are expressed as percentage and frequency. Wilcoxon-sign-rank test was used to examine differences between means. Proportion test was used to find the proportion difference. A P-value of less than 0.05 was considered statistically significant.

Table 1. Association of Microalbuminuria with HbA1ca and Duration of Diabetes on Admission

Table 2. Distribution of Patients Before and After Treatment According to HbA1ca Category

Table 3. Past Diabetic Ketoacidosis Episodes According to HbA1ca

Type 1 diabetes mellitus increases the risk of microvascular complications, such as nephropathy, retinopathy, and neuropathy. Increased incidence of T1DM with the burden of microvascular complications can influence the prognosis of young patients. Microalbuminuria is an early clinical indicator of diabetic nephropathy and is a predictor of increased cardiovascular mortality and morbidity (14). This study was undertaken to evaluate the prevalence of microalbuminuria and its association with HbA1c and to assess level of HbA1c in T1DM children with DKA on admission and three months after admission to assess diabetic control. Additionally, the study evaluated the correlation between HbA1c level and the number of past DKA episodes.

Diabetic ketoacidosis is a common presentation in T1DM patients, and it arises due to the lack of adequate insulin in the body resulting in lipid being used as a source of energy. Insulin deficiency results in increased glucagon levels, which results in the release of free fatty acids from the fatty tissue and amino acids from muscles (20). It is a potentially life-threatening condition with risk factors including children < 2 years, delayed diagnosis, and patients from lower socioeconomic strata with limited access to healthcare. Diabetic ketoacidosis at the time of diagnosis of diabetes is ominous of long-term poor glycemic control (21). Likewise, in this study, poor and fair diabetes control were associated with higher episodes of DKA when compared with good glycemic control, demonstrating that higher HbA1c level is associated with increased morbidity in the form of increased episodes of DKA.

This study also established the need for the evaluation of DKA and microalbuminuria with HbA1c in T1DM patients, as there is a paucity of research in this area. In this study, patient management with insulin therapy with appropriate counseling and regular follow-up resulted in good diabetic control. However, the study has certain limitations as HbA1c level is usually affected by the presence of hemoglobin variants and elevated levels of fetal Hb. In addition, since the study is unicentric, it is not well-grounded. Thus, a similar multicenter study with a larger sample size and precise assessment of HbA1c would yield more generally applicable results.

Overall, 18% and 60% of the patients had microalbuminuria and poor HbA1c control, respectively. Assessment of microalbuminuria is needed in pediatric T1DM patients, especially in those with HbA1c > 9% and duration of diabetes > 4 years, to evaluate the risk of diabetic nephropathy. Management with insulin therapy along with appropriate counseling and regular follow-up can significantly contribute to good glycemic control.