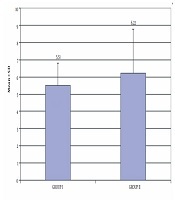 Neonatal hypoxic-ischemic encephalopathy (HIE) is one of the most common causes of cerebral palsy.

We aimed to compare the serum levels of total L-carnitine in newborns with HIE and Transient tachypnea of the newborn and to determine the correlation between associated demographic data, associated changes in laboratory findings, and outcome in cases with HIE.

This comparative, prospective, and observational study was conducted at the Neonatal Intensive Care Unit (NICU) of Assiut University Children Hospital. All the cases of perinatal asphyxia and TTN admitted to the NICU during 2016 - 2018 were included.

The serum level of total L-carnitine declined in both HIE and TTN cases. Male factor with changes in serum sodium level and abnormal serum creatinine level were significantly related to the mortality of cases with HIE.

Neonatal hypoxic-ischemic encephalopathy (HIE) is a major cause of cerebral palsy (CP) and other neurologic deficits in children. The prevalence of neonatal HIE is about 1.5/1000 live births (1). Hypoxic-ischemic encephalopathy can cause motor and cognitive disabilities, visual loss, hearing loss, and epilepsy in up to 30% of infants (2). Perinatal asphyxia is the most significant cause of HIE. Perinatal asphyxia may occur prenatally, intrapartum, or postnatally. Intrauterine asphyxia can occur due to placental abruption, uterine rupture, and tight nuchal cord, cord prolapse or avulsion (3).

L-carnitine is a hydrophilic amino acid derivative from lysine. It is synthesized in the body in the skeletal muscles, kidneys, liver, heart, and brain. It plays an essential role in the beta oxidation of long chain fatty acids, as it acts as a transporter of fatty acids through the inner mitochondrial membrane (6). It also affects the ketogenesis process by astrocytes in the brain, which is a source of energy for brain cells in the shortage of glucose (7). It also increases the synthesis of dipalmitoyl phosphatidylcholine in preterm neonates. L-carnitine decreases the incidence and mortality of respiratory distress syndrome (8). Transient tachypnea of the newborn is a respiratory problem in newborns occurring due to the lack of absorption of fluid in the fetal lung. The associated risk factors are elective cesarean section, gestational diabetes, and maternal asthma (9).

This prospective comparative and observational study included all the full-term HIE, and TTN cases admitted to the Neonatal Intensive Care Unit (NICU) of the Assiut University Children Hospital from December 2016 to June 2018. It is a tertiary care center receiving cases from all over Upper Egypt and providing management in multiple subspecialities. The newborns with perinatal asphyxia who died before admission, gestational age < 37 wks, and those with congenital anomalies were excluded. The study included 35 HIE patients and 12 TTN patients. Full perinatal history of the cases was collected, and all the cases were subjected to clinical examination. HIE cases were classified clinically by Sarnat staging (10). In the HIE cases, capillary blood gases, CBC, electrolytes, and renal function were examined. The demographic data and the results of HIE investigations were correlated to the outcome. The serum level of total L-carnitine was measured for both HIE and TTN cases by sending 1 ml of frozen newborn serum to be analyzed by human ELIZA (Enzyme Linked Immunosorbent Assay) kit (SinoGeneClon Biotech Co., Ltd) within the first week of life and compared with each other. Normal range in males and females is 17.4 - 58.7 µmol/l.

Data analysis was done using SPSS version 22. Data are presented as number, percentage, mean, standard deviation, and median. Chi-square and Fisher’s Exact tests were used to compare the qualitative variables. Independent samples t-test was used to compare quantitative variables between the two groups, and ANOVA test was used for more than two groups in case of parametric data. Mann-Whitney U-test was run to compare the quantitative variables between the groups in case of non-parametric data. A P-value of less than 0.05 was considered statistically significant.

The research protocol was approved by the Ethics Committee of Faculty of Medicine of the University IRB: 17300499 and by the head of Assiut University Children Hospital. Written consent was obtained from the participants’ parents after explanation of the research objectives and procedure.

The study included 35 cases of HIE (group I) and 12 cases of TTN (group II). All the cases were full-term babies, and there was no significant difference between the two groups in terms of demographic data (sex, weight and maternal age) as shown in Table 1. There were 19 (54.3%) female and 16 (47.7%) male newborns in group I versus 33.3% female and 66.7% male newborns in group II as presented in Figure 1. The mean birth weight in the first group was 2.78 ± 0.50 kg versus 2.86 ± 0.28 kg in the second group (Table 1). Overall, 22 and 11 cases were delivered by cesarean section in the 1st and 2nd groups, respectively, while 1 and 13 cases were born through normal vaginal delivery in groups II and I, respectively. 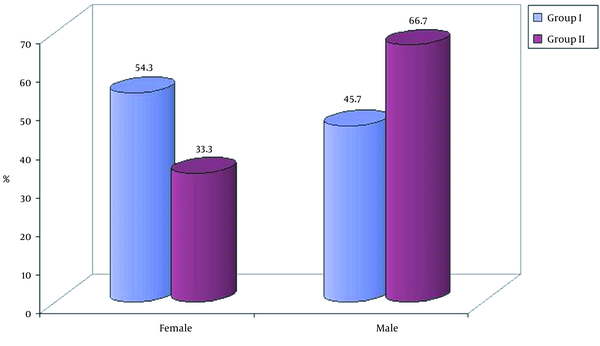 Sex distribution in group I and II

Table 2. Comparison Between Means of Serum Level of Total L-carnitine
Table 3. Correlation Between Sociodemographic Characteristics and the Outcome of Group I

Table 4. Correlation Between Clinical Data and the Outcome of Group I

aP < 0.05 was considered to be statistically significant. 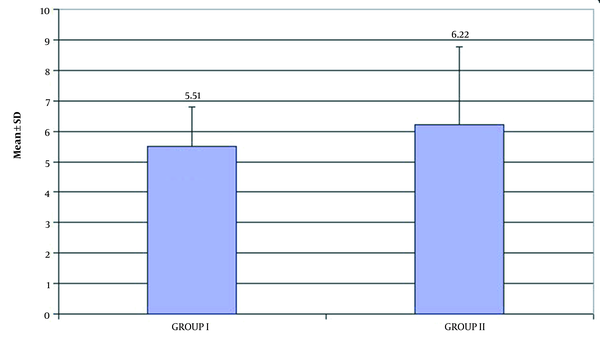 The study included 35 cases of HIE and 12 cases of TTN admitted to the NICU of Assiut University Children Hospital (a tertiary care center) during a period of 18 months. This decreased number in both groups can be explained in group I by proper antenatal care, the increased awareness of its importance in our community, and improved resuscitation practices. In group II, the decreased number could be due to the good prognosis of these cases who were treated in other primary and secondary care centers without the need for referral to a tertiary care center. There were 19 (54.3%) females and 16 (47.7%) males in the first group versus 33.3% females and 66.7% males in the second group. This was in line with Simiyu et al. (11) findings, which showed that more than half (52.9%) of the infants were females. This was in contrast with Namusoke et al. (12) findings, which demonstrated that the majority of HIE cases (53%) were males. This was in contradiction with Wilson et al. (13) report, which indicated that the diagnosis of HIE was more common among males.

The serum level of total L-carnitine was found to decrease in group I, and this was in agreement with Lopez-Suarez et al. (14) and Wilson et al. (13) results, which revealed that change in acylcarnitine profile may be considered in the identification of HIE cases, and in the present study it also decreased in group II. This can be explained by the fact that both groups had hypoxia, perinatal asphyxia in group I, and postnatal minimal respiratory hypoxia in group II. This was also acknowledged by the mean serum level of total L-carnitine in the two groups (5.51 ± 1.30 and 6.22 ± 2.56 for groups I and II, respectively).

There was a significant correlation between male factor and death (death of 66% of males with HIE). This was in agreement with Boskabadi et al. (15) findings, which exhibited an association between poor prognosis and male factor in HIE cases. There was a significant correlation between grade III HIE (86.7%) and death. This could be justified by the poor prognosis of grade III HIE cases. This was in agreement with Simiyu et al. (11) results, which showed that most deaths were in cases of grade III HIE. There was a significant correlation between hyponatremia, abnormal serum creatinine, and death of HIE cases. This could be explained by Thakur et al. (16) results, which suggested that hyponatremia is directly proportional to the degree of birth asphyxia. This was in consistent with Glopal (17) findings, which revealed increased mortality rate (18.75%) in asphyxiated patient with acute kidney injury.

It was found that serum total L-carnitine decreased in both cases of HIE and TTN. Male factor with changes in the serum level of sodium (hyponatremia) and raised serum level of creatinine were related to the death outcome of cases with HIE. Our findings underscore the key role of antenatal care and neonatal resuscitation. We recommend the use of total L-carnitine as a marker for hypoxia and treatment with L-carnitine in hypoxic patients in future studies.