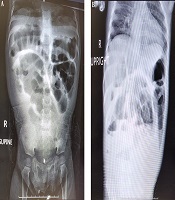 Late-Onset Presentation of the Jejunal Web: A Case Report and Review of the Literature

The congenital intestinal web is a rare cause of small bowel obstruction classified as type I intestinal atresia. The second portion of the duodenum is the most prevalent site for these webs, whereas the jejunal web is rare.

In this study, we present a very uncommon late presentation of the jejunal web in an 18-month-old girl complaining of chronic recurrent vomiting, constipation, and failure to thrive (FTT). After thorough investigations, the diagnosis was confirmed by the small bowel follow-through. The surgical procedure resulted in a significant improvement in patient’s quality of life, given the subsequent increase in her weight and height.

Vomiting that occurs at any age is pathologic and requires careful history taking thorough clinical examination and evaluation, especially in patients treated with proton pump inhibitors such as omeprazole for a long time with a diagnosis of gastroesophageal reflux disease (GERD) without any response. In these patients, gastrointestinal abnormalities, including complete or incomplete obstructions such as malrotation and web, should be made in the differential diagnosis.

The intestinal atresia is among the most common etiologies of complete and partial small bowel obstruction. It has been classified into five types, including type 1 (mucosal web), type 2 (atretic fibrous cord), type 3a (mesenteric defect), type 3b (apple peel atresia), and type 4 (multiple atresias) (1, 2).

Clinical manifestations such as bilious vomiting and abdominal distention often present soon after birth, commonly in the first 24 hours of life (3, 7). However, in few cases, the onset of symptoms is delayed to childhood, probably due to a fenestrated web resulting in the partial obstruction (4, 8). This unexpected delay is probably the main reason for excluding this serious cause of intestinal obstruction among the long list of differential diagnoses.

Here, we present a relatively rare jejunal web case with an uncommon late onset of symptoms (after 18 months) and discuss the existing literature regarding the jejunal web.

An 18-month-old girl, G2P2L2A0, breastfed, referred to our tertiary children’s hospital with a history of nausea, chronic recurrent vomiting, abdominal distension, constipation, and failure to thrive (FTT) due to poor feeding from 6 months ago. The patient had a birth weight of 3.970 kg and was delivered by cesarean section at the 39th week of pregnancy. She had a past medical history of neonatal jaundice with phototherapy and gastroesophageal reflux disease (GERD) since 2 months old; the patient was on omeprazole treatment during this time without any response. Also, she had been hospitalized several times because of nausea, vomiting, dehydration, and FTT since a year ago. The patient had an ill-looking appearance and was dehydrated. According to the results of clinical examination, body temperature was 37°C, blood pressure 80/50 mmHg, heart rate 120 beats/min, and respiratory rate 22/min. The patient had a sunken eye with a depressed anterior fontanel. The abdominal examinations were normal, and no signs of distension, tenderness, or organomegaly were present. The patient had a weight of 6.600 kg, a height of 64 cm, and a head circumference of 42 cm. The patient had a Z-score of < -3.8, defined as a severe FTT and marasmus looking appearance. Other systems, including the chest, heart, and central nervous system (CNS) were normal. Table 1 and Figure 1 show a growth chart since birth up to 4 months of post-surgical correction.

Table 1. Growth Chart at Birth up to 24 Months 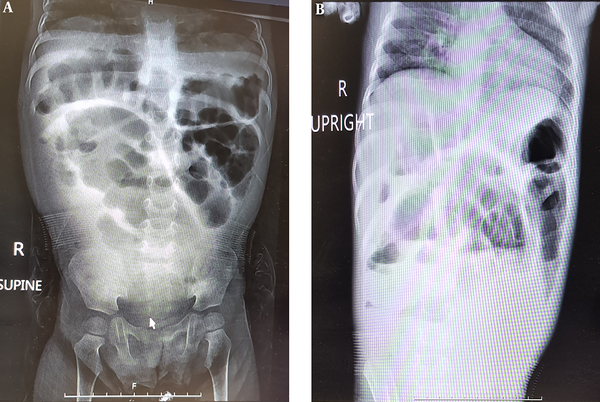 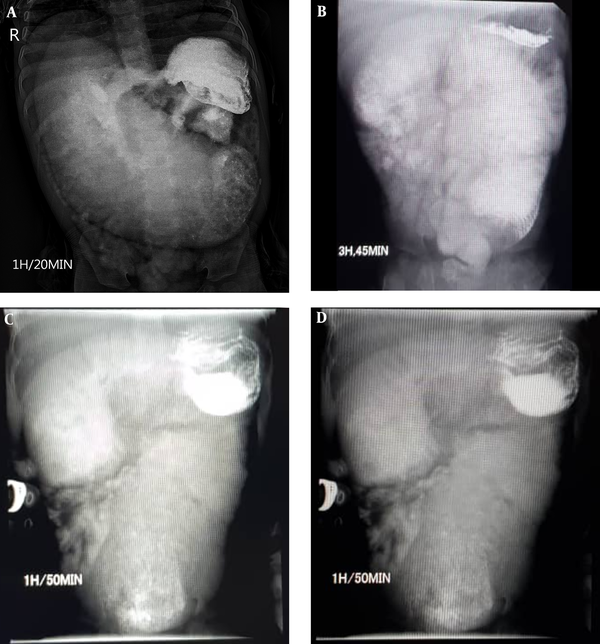 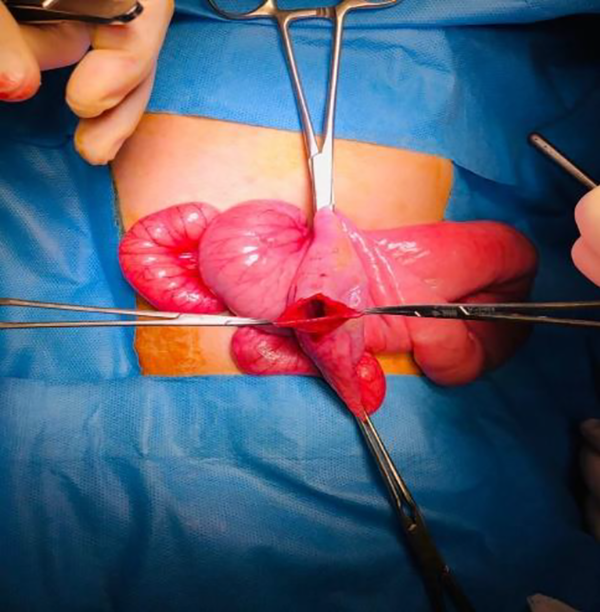 Jejunal web is a congenital finding presenting often early after birth, usually in the first 24 hours of life. The jejunal atresia or web manifestations may be delayed beyond infancy. The typical presentations are biliary vomiting, abdominal distension, constipation, and FTT (3).

We reported an uncommon jejunal web case of an 18-month-old female child with recurrent vomiting, constipation, and FTT. The patient had been hospitalized several times due to nausea, vomiting, and dehydration since last year without any significant physical examination findings. In this case, there were three aspects of interest. Firstly, the delayed onset of symptoms as it started at 18 months old; secondly, the infrequency of the condition; and thirdly, the surprisingly good response to surgical treatment. In a study by Shakya et al. (9), six out of 11 children died due to jejunal atresia. On the other hand, Lin et al. (3) reported that the response to surgical treatment was good since all the patients survived properly and showed feeding tolerance, as in the current case.

Furthermore, in perforated cases, pneumoperitoneum is often found in chest X-ray (10). In the study of Tang et al. (7) on a 7-day-old boy presenting with recurrent vomiting, GI contrast studies showed incomplete duodenal obstruction and distended duodenum with partial hold up of contrast at the distal duodenum. A supine abdominal X-ray revealed an asymmetric dilation of bowel loops with multiple air-fluid levels in our patient. Abdominopelvic ultrasound revealed jejunal distension along with an increase in the mucosal thickness.

Based on the clinical and paraclinical findings, the patient was diagnosed with jejunal web obstruction. Jejunal atresia is typically managed by surgical procedure with excision of the affected area (11). Tang et al. (7) performed an emergency laparotomy with the excision of jejunal web and 2 cm of the jejunum and an end-to-end oblique jejuno-jejunostomy anastomosis with no postoperative complication. Afterward, the oral diet was well-tolerated, and appetite resumed suitably. Kothari and Kothari (12) also reported a four-year-old case who presented with FTT, recurrent bilious vomiting, abdominal pain, and the final diagnosis was the jejunal web. Enterotomy with excision of the web was done in that case, and the child had an uneventful postoperative recovery. In our case, the patient was followed for six months after surgery, which revealed a surprising increase in appetite with significant weight, height, and head circumference growth. As shown in Table 1, the patient had poor weight gain until 18 months old (birth weight: 3.970 kg - 18 months: 6.800 kg). However, weight gain after the operation was significant (21 months: 9.600 kg; 23 months: 10.500 kg; 24 months: 11.600 kg).

In conclusion, intestinal atresia is a rare complication and should be considered a probable diagnosis in patients presenting intestinal obstruction even after the neonatal period to undergo necessary investigations and hamper the following mortal outcomes.