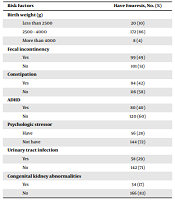 Associated Etiologies of Enuresis in 5-to-15-Year-Old-Children

Enuresis is one of the most common problems in children with physical and psychological complications that can disturb their social relationships. The main objective of this study is to evaluate the relationship between enuresis and its associated etiologies in children aged 5 to 15 years in Zahedan. The study further contributes to an early realization of the parents of children with enuresis-associated problems.

Following a descriptive design, 200 children (5 to 15 years old) suffering from enuresis referred to nephrology and psychiatric clinics in Zahedan in 2019 were recruited. Data were analyzed using SPSS software.

The significant etiologies typically found in the onset of enuresis and its exacerbation can be controlled or treated. Since the complications of enuresis have not been properly clarified for families, it is of crucial importance to increase awareness about this health problem.

Nocturnal enuresis is involuntary urination that happens at night while sleeping, after the age when a person should be able to control his/her bladder (1, 2). According to the definition developed by International Children's Continence Society (ICCS), it is concerned that nocturnal enuresis remains underdiagnosed in children until the age of seven or eight years (1). It affects approximately 15% of all children at the age of 5-years and is more common among boys (3, 4). Firoozkoohi et al. investigated the prevalence of enuresis in school-age children in Zahedan and reported a prevalence of 7% for NE in boys and 3% in girls (5).

Enuresis is classified according to the presence of lower urinary tract symptoms (LUTS) as mono-symptomatic and non-monosymptomatic. In addition, it can be divided based on the dryness prolongation into primary (< 6 months’ dryness) and secondary (relapse after > 6 months of dryness) (6). According to this definition, 80 - 90% of cases are diagnosed as primary enuresis. According to previous studies, NE is a multifactorial disease characterized by a complex interaction of genetic, developmental and psychosocial factors (6, 7). Some well-known etiologies include electrolyte imbalance, decreased antidiuretic hormone (ADH) levels, and decreased bladder capacity.

Furthermore, disease-like symptoms, including constipation, encopresis, urinary tract infection (UTI), suprapubic pain, asymptomatic bacteriuria, vesicoureteral reflux, neuropsychiatric disorders, learning disabilities, and sleep disorders, are both relevant and important for nocturnal enuresis (8, 9). In addition, a predictive association has been postulated between factors like ethnicity, age, gender, birth order, education level and employment status of parents, family size, income, socio-economic status, bedtime habits, arousal dysfunction with NE (10). Nocturnal enuresis can lead to a constant feeling of distress, which eventually results in chronic stress. In addition, it has negative impacts on the emotional well-being of children, which in turn affects their self-esteem and social development. Children suffering from NE have lower levels of self-esteem, mental health, skills, and poor relation with their parents and others. Considerably, following receiving treatment for nocturnal enuresis, children who become completely dry have higher self-esteem than those with persisting nocturnal enuresis (11, 12).

Children diagnosed with NE are at increased risk of psychiatric disorders by 2 - 6 times because of embarrassment, low self-esteem, aggression, and perform poorly in life and society (1).

The current study aimed to investigate the association between enuresis and some associated etiologies to both inform parents and to prevent the occurrence of enuresis problems.

Following a prospective design, the current study was performed by specialists from various disciplines like pediatric, nephrology, and child psychiatry (of Zahedan University of Medical Sciences) in 2019. To diagnose patients with MNE (Monosymptomatic Nocturnal Enuresis) a structured protocol was applied. Also, the inclusion criteria being aged between 5 to 15 years and MNE (Monosymptomatic Nocturnal Enuresis) diagnosis according to the ICCS criteria (International Children’s Continence Society) (13, 14).

Informed consent was obtained from the patient’s parents. Then, all participants were examined by a pediatric nephrologist, and a child psychiatrist and necessary data were collected using researcher-developed checklists. The checklist was comprised of two sections. The first section contained data on variables of age, gender, birth weight, constipation history, fecal incontinence, urinary tract infection, kidney abnormalities, urine analysis, ultrasound, and other imaging procedures were collected. The second section was comprised of Psychological stressors and ADHD.

In terms of birth weight, participating children were classified into 3 groups of less than 2500 grams, 4000 - 2500 grams, and more than 4000 grams. The data regarding the birth weight were obtained through the history given by parents or children’s growth cards. Fecal incontinence was investigated according to DSM-IV criteria for defecation at least once a month for 3 consecutive months, voluntary or involuntary, with or without constipation in a place other than the toilet (3). A history of constipation for less than 3 times a week or more than 25% of total bowel movements was considered painful.

Ultrasound and other imaging techniques were used to assess congenital kidney abnormalities. An ultrasound specialist examined the genitourinary system, which included the morphology and capacity of the bladder, post-void residual (normal 20 mL), and bladder thickness (3 mm was considered normal). The measured bladder volume was considered as decreased if it was less than 65% of the expected volume and as elevated if it was more than 150% of the expected volume for a given age (15, 16). Ultrasound was used to diagnose constipation. Rectal transverse diameter (normal 30 mm) was considered as a diagnostic factor (2, 17). Finally, ICCS criteria were used to diagnose NE, and its multiple periods were defined as more than 4 times (2).

The urine culture of more than 100,000 micro-organisms in the midstream urine sample was considered as urinary tract infection. In the second questionnaire, which was completed by a pediatric psychiatrist, any psychological or frightening stress event that probably has negatively affected the child during the last 6 months was considered as psychological stressor. The presence of ADHD, based on the symptoms along with dysfunctional behavior of the child for at least 6 months, was studied according to DSM-lV criteria (4).

This study was approved by the Ethical Committee of the Zahedan University of Medical Sciences (thesis code: 1333). Finally, data analysis was administered using SPSS version 20.

Table 1. Relationship Between Enuresis and Some Factors

Enuresis is one of the most common problems in children with physical and psychological complications that can disturb their social relationships. This study was performed on 200 children aged 5 - 15 years with enuresis referred to nephrology and psychiatric clinics in Zahedan in 2017. The number of girls suffering from enuresis was two times greater than boys, mostly among those aged 5 to 10 years. The prevalence of enuresis is negatively associated with age. Children with enuresis mostly weighed 2500 to 4000 g at the time of birth or slightly less than 2500 g or slightly more than 4000 g. Half of the children with nocturnal enuresis had fecal incontinence, and there seems to be a close association between the causes of urinary incontinence and fecal incontinence. We also found a significant association between constipation, ADHD, and enuresis. In this study, approximately half of children with enuresis had constipation and ADHD, and less than one-third of the participants had psychological stressors, congenital kidney disorders, and UTI.

Gunes et al. (2009) concluded that UTI and younger age were effective factors in the development of enuresis. Psychological stressors are not associated with nocturnal enuresis. There is also no significant gender difference between patients (18). According to the findings, enuresis is more prevalent among girls. The observed difference can be attributed to cultural differences. Most parents mentioned the presence of enuresis in girls as a serious problem, but in boys, this issue is not that much important. Most of those referred to our clinic are girls. These factors may have contributed to the increased prevalence of enuresis in girls in our study. Furthermore, the lower prevalence of UTIs in the present study, compared to previous studies, can be attributed to the sensitivity and accuracy of applied laboratory evaluation.

In their study, Sureshkumar et al. (2005) found that the male gender was highly associated with severe enuresis, while constipation and psychological stress were related to moderate enuresis. The prevalence of constipation in children with enuresis is 7.5%. Constipation and fecal incontinence were effective factors and were more prevalent in our study (19). Shreeram et al. (2004) identified ADHD as one of the strongest risk factors for enuresis development, which is similar to the results of the present study (20). Akhavan Karbasi (2006 - 2005) concluded that the prevalence of enuresis is higher in boys (contrary to the present study), and there is no association between family history, birth rank, and enuresis. In the present study, we did not consider these two factors (21). EmamGhoraishy concluded that a history of UTI has no effect on the prevalence of enuresis. There is no association between parents' education level, number of children, economic status, and enuresis, which was not investigated in the present study (22). Dehghani et al. (2006) reported a significant association between the history of UTI and mental stressors with enuresis. In our study, psychological stress was not significantly associated with enuresis (23). Osungbade (2003) reported that for 33% of all cases, enuresis was caused by a UTI, which is slightly higher than the value found in the present study (29%) (24). Fatahi Bayat (2001) concluded that enuresis is more common in girls and there is a significant association between UTI and enuresis, which we did not investigate (17).

Percentage difference in enuresis-related factors is one of the differences observed in this study as compared to other studies, which can be attributed to racial and cultural differences. In these cases, psychological stress reported by parents is unreliable because parents pay less attention to constipation than enuresis in their children.

In the present study, 200 children with enuresis were investigated. According to the findings, enuresis is more prevalent in females, in children aged 5-10 years, and those with a birth weight of 2500 - 4000 g. Constipation and ADHD were found to be significantly associated with the occurrence of enuresis, which indicates the need for further evaluation. Enuresis was not evident in cases of UTIs, mental stress, and congenital kidney disorders.

The authors pay their regard and are thankful to the Emergency Medical Service Personnel, Pediatric Residents, Nurses, and Emergency Physicians, and all those who participated in the present study. This article was supported by the Children and Adolescents Health Research Centre of Zahedan.