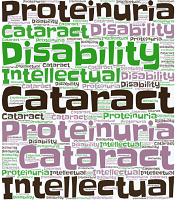 An Update on the Oculocerebrorenal Syndrome of Lowe: A Review Article

For this narrative review, the articles from several sources, including Scopus, Google Scholar, Embase, Web of Science, PubMed, and the Directory of Open Access Journals, were used.

It is essential to investigate the diverse clinical manifestations of LS. The prognosis and severity of the disease have not yet been determined. It is recommended to perform extensive general studies on the prevalence, diagnosis, and management of this syndrome.

Lowe syndrome (LS) is a sporadic disease that involves different organs. The life duration of LS is not exceeded more than 40 years, and prenatal diagnosis and prevention of complications are essential. The LS was first described in 1952 by Lowe et al. The LS’s other name is known as a phosphatidylinositol-4,5-bisphosphate-5-phosphatase deficiency or oculocerebrorenal (OCRL) syndrome (1-3). The OCRL syndrome’s name roots in the fact that the three main parts of the body are prominently preoccupied (i.e., eyes, brain, and kidney). Still, it is likely that musculoskeletal, gonad, skin, and connective tissues are also involved (4-6). This syndrome is a sex-linked disorder, the main features of which are the triad of renal tubular dysfunction, mental disability, and cataracts (1-6). Other characteristics include growth retardation after birth with no dependence on kidney function, behavioral problems, stereotypic behavior, areflexia, severe muscular hypotonia, intellectual disability, recurrent pathologic bone fracture, nontender joint swelling, tenosynovitis, arthritis, debilitating palmar and plantar fibrosis, focal nodules, bone erosions, potassium loss, sodium loss, aminoaciduria, bicarbonaturia, low-molecular-weight (LMW) proteinuria, tubular dysfunction with slowly progressive renal insufficiency, and arthropathy (1, 2, 7-9).

The abnormalities observed in LS are thought to be marked by the unnatural transmission of vesicles within the Golgi system (2). The eye manifestations and muscle hypotonia are the significant signs detected at birth; however, the signs and symptoms of renal Fanconi syndrome are often recognized just over time in life (9, 10). This new pathogenic variant condition is a rare X-linked disorder reported in 32% of male individuals affected with this syndrome (11). When a pathogenic type of OCRL gene is detected in a patient’s family, prenatal genetic testing is necessary (11). A high risk of germline mosaicism (4.5%) has been identified. In a heterozygous mother, the probability of getting the disease in each pregnancy is 25% for male neonates, 25% for healthy neonates, and 25% for heterozygous, and 25% for nonheterozygous female neonates (11).

The OCRL gene prepares instructions for making an enzyme that helps change membrane phospholipids. It is related to the primary cilia of fibroblasts, retinal pigment epithelial cells, and renal tubular cells, suggesting that this syndrome is due to the dysfunction of the cilia in these cells (2, 8). Over 200 different types of OCRL have been described; however, no variant is identified in 10% of patients with the possibility of LS (2, 9). This syndrome has a prevalence of approximately 1 in 500,000 individuals (1). The cause of LS is different types of OCRL genes on chromosome Xq25-26, encoding OCRL-1, an inositol 5-phosphatase inositol (2, 8). This gene encodes a phosphatidylinositol bisphosphate-5-phosphatase, a site in the trans-Golgi complex active in actin polymerization (2, 12). Some mutations in the OCRL gene stop the production of various enzymes caused by this gene. Other mutations inhibit the enzyme’s activity or prevent it from interacting with other proteins inside the cell (12-16).

The OCRL types are observed not only in LS but also in humans, who usually have kidney changes that are classified as Dent disease type 2 (Dent-2) (2, 16, 17). Recent data suggest phenotypic persistence between Dent-2 and LS, indicating differences in the ability to make up for the enzyme deficiency (6, 13, 16). Therefore, numerous studies have shown that OCRL-1 is preoccupied with various cellular activities having endocytic trafficking and skeletal dynamics of actin. These findings explain the different clinical symptoms of the disease (12, 13).

Recently, no relationship has been identified between genotypes and phenotypes; therefore, the clinical intensity of disease is correlated with some types of disease. However, male patients within the same family have equivalent phenotypes, as interfamilial variability has not yet been reported (3, 4, 11). Dent disease is an X chromosome-dependent inheritance tubulopathy with proximal renal tubular acidosis, hypercalciuria, nephrocalcinosis, renal stone, LMW proteinuria, renal failure, and hypophosphatemic rickets. Patients with Dent disease never have extrarenal manifestations, except rickets (3, 4, 14). This study aimed to assess the clinical manifestations of LS, mainly the novel investigations of LS, to provide an update on the clinical manifestations that diminished the misdiagnosis of LS.

The LS is heterogeneous in clinical characteristics and involves multiple systems. Ocular, neurological, and renal manifestations are the main organs included in LS. However, there are some other rare manifestations that can be involved in LS and are discussed separately in this context.

Dense congenital bilateral cataracts are regarded as a significant sign of LS, which occur in embryonic time due to defects in formation and late eradication of the primary posterior lens fibers. These cataracts might also be shown on prenatal ultrasound images (1, 2). In case of delay in treatment, cataracts can cause nystagmus, amblyopia, and eventually blindness (2, 5). Glaucoma occurs in 50-70% of patients and might occur ideologically at any age, usually in the first year of life (2, 5, 17, 18). The patients might also show corneal leukoma; nevertheless, all male children have visual impairments. Visual impairment is a mix of morphological conversion in the eye, retinal impairment, and cortical function (1, 2, 8). Corrected accuracy is rarely better than 20/100 (2).

Musculoskeletal symptoms might be caused by the essential manifestations of LS or as a remarkable demonstration of the underlying disease (2, 8). About half of patients develop scoliosis, which often accelerates its progression after puberty (2, 6). Osteopenia is present in almost all patients and worsens in untreated acidosis and high renal phosphate excretion (2, 17).

The major issues for families were behavioral disorders, including repetitive and obsessive behaviors, anxiety and anger, and self-harm (17). Epilepsy might be observed; however, a febrile seizure is a clinically significant condition and usually occurs up to 1 year of age (8).

Male patients have proximal renal tubular dysfunction of the Fanconi shape, including severe loss of some substances in the urine, including LMW protein, amino acids, organic acids, albumin, bicarbonate, sodium, potassium, phosphate, L-carnitine, and calcium (2, 8, 15, 19). These kidney disorders cause polyuria, mild to moderate dehydration, and tubular acidosis. A loss of electrolytes and nutrients might also cause growth disorder and result in soft and curved bones, particularly in both feet. The features of symbolic Fanconi syndrome do not generally manifest until early life, without LMW proteinuria. There are tubulointerstitial changes, stout and density of glomerular basement membrane, and variation in the proximal tubule (2, 8, 9). Severe sclerosis in the glomerular tuft associated with severe tubular atrophy usually results in kidney failure and end-stage renal disease after a few decades (2, 6, 8). The cause of progressive renal failure in LS is not yet fully understood (3). Urolithiasis and hypophosphatemic rickets are less common complications (2, 8).

There are often changes in the face, including deep eyes, frontal bossing, chubby cheeks, and a fair face (5).

Most of these patients require multiple surgeries and are prone to bleeding disorders characterized by impaired primary homeostasis and primary platelet activation with thrombocytopenia (2). Nevertheless, the mild thrombocytopenia observed in one-fifth of patients is typical in addition to activated partial thromboplastin time, prothrombin time, fibrinogen, and von Willebrand factor levels (2).

Most patients have normal puberty, as the normal level of testostrone hormone (2). There are several reports of pubertal delay, infertility, and cryptorchidism in LS (10). Fertility might be decreased due to azoospermia and fibrosis in the peritubular duct (2, 9). Cryptorchidism might improve on its own (3) or with hormone therapy; however, there is rarely the need for surgery (1). The use of recombinant human growth hormone should be restricted to patients with provable growth hormone deficiency (1). Only recombinant human growth hormone should be used with growth hormone deficiency patients (1). The improvement of the long-term function of the gonads in LS is becoming increasingly important for every patient, as advances in kidney replacement therapy have significantly increased life expectancy in these patients (10).

Benign cystic lesions of the skin have been reported. The cause of these cysts is unknown but precise due to the increased extracellular concentration of lysosomal enzymes (2).

The diagnosis of LS can be made through clinical and laboratory findings, genetic testing, and prenatal procedures. The prenatal and postnatal distinctions are made by enzymatic and molecular analyses (2). Molecular studies should approve the clinical diagnosis of the OCRL1 gene; however, unfortunately, it is impossible to diagnose and evaluate all patients before birth (1, 5, 9, 12, 18). Before giving birth, it is necessary to check all suspected patients or family history (6, 8, 9). Treatment is supportive (sodium bicarbonate, sodium or potassium phosphate, and vitamin D) and includes anticonvulsants, taking care of eye manifestations, speech correction, and tooth problems (2, 8, 10).

The ocular malformation generally needs to be treated at birth (2, 8). The immediate treatment of cataracts is essential for the prevention of amblyopia and the careful and prolonged control of ocular pressure (1, 8, 10). In patients with glaucoma, eye pressure control with medication and surgery is essential (1). Pubertal delay, infertility, and cryptorchidism were observed in LS (10). The treatment of sexual dysfunction and improvement of long-term gonadal function in LS have become increasingly important because some advances in kidney replacement therapy led to significantly improved life expectancy and more active life (10, 20, 21). New clinical trials for the treatment of polycystic kidney disease and Bard-Biddle syndrome have prescribed rapamycin. It has recently been named a candidate for the reduction of ciliogenesis defects in LS (22).

There are several reasons why this disease is essential. In the first stage, its development is congenital, involves several vital organs, and is characterized by various symptoms. Secondly, there are rare cases and similar, comprehensive, and new reports on the management and treatment of these patients worldwide. Thirdly, by applying a type of OCRL to define cases, it was observed that there is a wide range of diseases from single severe tubular disease (Dent-2) to the most intense manifestations of LS. However, there has been much progress in understanding the action of OCRL-1 in cell and organ metabolism. However, the prognostic factors and severity of the disease have not yet been determined. It is recommended to carry out further studies on the diagnosis and management of this syndrome, especially on prenatal awareness.

The authors would like to express their gratitude to Qom University of Medical Sciences, Qom, Iran, for supporting. Moreover, the authors appreciate Dr. Mohammad Amin Habibi and Dr. Mohammad Hosein Akhavan Sepahi for editing the article.

Copyright © 2022, Author(s). This is an open-access article distributed under the terms of the Creative Commons Attribution-NonCommercial 4.0 International License (http://creativecommons.org/licenses/by-nc/4.0/) which permits copy and redistribute the material just in noncommercial usages, provided the original work is properly cited.
download pdf 98.39 KB Get Permission (article level) Import into EndNote Import into BibTex
Number of Comments: 0