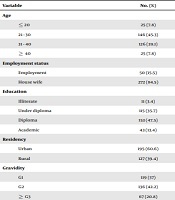 Maternal Attitude Towards Cell Phone Use During Pregnancy; A Potential Harm to the Fetus

Despite the lack of conclusive and proven supporting epidemiologic data about the association between cell phone radiofrequency electromagnetic fields (RF-EMF) and the developing fetus complications, there are frequent discussions about this matter.

A medical student interviewed eligible pregnant women admitted to Al Zahra Hospital, an academic referral hospital in the North of Iran, to fill questionnaires intended to assess maternal demographic data and their attitude towards cell phone use during pregnancy in 2020.

A total of 322 pregnant women with the mean age of 30.12 ± 6.81 years enrolled in the survey, in which 3.1% of them were non-cell phone users, and 6.052% of all did not use a cell phone during the first trimester. Also, 38.81% of them mentioned healthcare providers as the main source of obtaining information, while 40.6% did receive any information. The mean years of cell phone use and the daily hours were 8.26 ± 4.1 and 2.66 ± 2.02, respectively. Also, 64.3% believed that cell phone use poses risks to the fetus, while 26.7% had no idea. A positive association was also found concerning maternal awareness from cell phones harmfulness to the fetus and maternal education, residency, and employment (P < 0.0001).

In this study, the majority of pregnant women believed that cell phone use during pregnancy could be harmful to the fetus; however, most of them were cell phone users with no special consideration even during the first trimester. It seems that the importance of the issue must be revealed to them by more healthcare providers’ interventions.

Recently, serious public concerns are raised regarding the possible health risks of cell phone radiofrequency electromagnetic fields (RF-EMF) (1). According to the literature, pregnant women are at increased risk of such adverse health effects (2), particularly regarding the sensitivity of early embryos to environmental exposures (3), which is similar to general anesthetics-related neurotoxicity in developing the brain during pregnancy (4-8). While problems related to these exposures may not appear after birth, the possibility of long-term complications has always been raised. Despite the unknown nature and the underlying mechanism of the fetus’s vulnerability to cell phone radiation (9), recent studies have shown that it may be linked to free radicals generation, oxidative stress, and even cell damage (10). Some studies demonstrated a significant association between the risk of abortion, congenital malformations, childhood behavioral disorders, and excessive maternal cell phone use (5, 6, 11-19). Overall, it should be noted that although the negative effects of cell phone use during pregnancy have remained controversial and currently available evidence are inconsistent, cell phone use poses a potential risk (20-22). Therefore, it is wise to prevent unnecessary exposures.

The aim of this study was to investigate the maternal attitude towards the vulnerability of the developing fetus to cell phone radiation, and some related factors among women admitted to AL-Zahra Hospital.

Following a cross-sectional design, the current study is conducted on pregnant women admitted to AL-Zahra Hospital, an academic and referral center affiliated to the Guilan University of Medical Sciences (GUMS), during 2020.

Inability to communicate due to linguistic barriers, suffering from a special medical condition or other reasons, and unwillingness to participate.

Initially, written informed consent was obtained from all participants before entering the study and after a comprehensive introduction to the study protocol. Data were collected using a researcher-developed questionnaire, which contained items on demographic data, frequency of cell phone use, and attitudes towards the vulnerability of the developing fetus to cell phone radiation. Its content, reliability, and validity were confirmed by 10 GUMS faculty members. All questionnaires were filled by a medical student.

For 38.81% of them, healthcare providers were the main source of obtaining information, and 40.6% declared receiving no information. Of all participants, 3.1% were non-users, and 6.052% did not use a cell phone during the first trimester. The mean years of mobile use and hours of daily use of cell phone were 8.26 ± 4.1 and 2.66 ± 2.02, respectively (Table 2). According to the findings, 64.3% believed that cell phone use poses risks to the fetus while 26.7% had no idea. A positive correlation was found concerning the awareness about cell phone harmfulness and maternal age, education, and residency (P < 0.0001). A positive correlation was also found concerning maternal awareness about cell phone harmfulness to the fetus and maternal education, residency, employment, as well as other reasons for cell phone use (P < 0.0001) (Table 3).

Table 2. The Pattern of Cell Phone Use During Pregnancy
Table 3. Maternal Attitude Towards the Vulnerability of the Developing Fetus to Cell Phone Radiation and Some Related Factors

In this study, the majority of pregnant women believed that cell phone radiation exposure during pregnancy could be associated with negative impacts on fetus health outcomes, while most of them used cell phones with no limitation. It seems that individuals do not act as they believe, or the importance of the issue has not been discussed properly to them. A little percent of them avoided cell phone use during the first trimester, while most of them acknowledged that the cell phone was harmful to the developing fetus. Nearly half of them received no information regarding the issue and the medical team was only the source of information among limited cases.

These findings indicate the considerable contribution of medical teams, particularly obstetrics, in providing accurate information to pregnant women. Studies indicate that although the issue has not been definitely proven, and cell phone use during pregnancy may be associated with a small impact on birth outcomes, the accumulative impact on public health may be considerable (23).

Similar studies have shown that maternal cell phone use was related to high education, younger age, and higher socioeconomic status (6, 11, 12). In this study, a positive association was found between maternal awareness about potential risks of cell phone use for the fetus and higher education, urbanity, and employment. Meaning those individuals with higher education, living in urban areas, employed, and those who used cell phone for other purposes, like playing games or listening to music, rather than talking, were more aware of this matter. Because several factors contribute to this matter, various studies have reported different rates of cell phone use during pregnancy.

To the best of our knowledge, few studies have focused on the issue in Iran. Mahmoudabadi et al. (3), in a case-control study, reported that cell phone use by pregnant women was associated with early spontaneous abortions. Following an experimental design, Bahreyni Toossi et al. (10) found that cell phone waves could induce oxidative stress and tissue damage in offspring mice.

In a prospective multi-center cohort study, Boileau et al. (24) investigated the adverse effects of mobile phone radiation on the human fetus. They analyzed 1378 medical charts and found that 99.3% of mothers used a mobile phone during pregnancy. Also, they reported a mean call time of 29.8 min. Their remarkable finding was that phone times for more than 30 min per day by pregnant women caused negative effects on fetal growth (24). Comparing to the results of our study, both the number of users and the mean daily phone time were higher. In the study by Papadopoulou et al. (13), which is performed in Norway, 9.8% of the participants did not use cell phones during pregnancy. Zarei et al. (14) found that child speech problems were significantly associated with a history of maternal long cell phone call time during pregnancy. In Divan et al. study (15) from Danish, 60% of pregnant women were non-users. They also reported that prenatal and early postnatal exposure to cell phone radiation were associated with behavioral disorders such as hyperactivity (15). Tsarna et al. planned a meta-analysis and found that the use of cell phones during pregnancy was significantly associated with preterm labor and a shorter duration of pregnancy (23). In a population-based birth cohort study on 2618 children, Guxens et al. (12) concluded that teacher-reported behavioral disorders at the age of seven were associated with cell phone use during pregnancy. There are also evidence indicating an association between cell phone use during pregnancy and low birth weight (16). Experimental studies showed that intrauterine exposure to cell phone radiation affects the developing brain of the fetus (17, 18). According to these researches, the lack of a definite conclusion in this regard can be attributed to the fact that they could not assess other variables that likely contribute to such outcomes, such as chromosomal abnormalities, maternal comorbidities, or other environmental harmful exposures.

The socioeconomic and nutritional status may also contribute to a child’s development (3). Moreover, it cannot be argued that cell phone is the only source of RF-EMF. Meanwhile, the results of animal studies cannot be easily generalized to humans, mainly because the depth of exposure in the human brain and animals are not comparable, which means a difference in the amount of received radiation (19, 25). Overall, this study demonstrated that cell phone use is quite common among pregnant women referring to our hospital. Complete avoidance of cell phone use cannot be recommended; however, considering the current alarming evidence, its usage should be restricted, particularly during the first trimester.

Although this study provided valuable information regarding cases referring to a public hospital, patients referring to the private sector are not considered. Our literature review indicated no similar study on this topic, which, while indicating the novelty of our study, also revealed the limitation of discussion about this important issue.

According to the findings, the majority of participants were using cell phones during pregnancy, while acknowledging its potential risks. They had no special consideration even during the first trimester. Those living in urban areas, employed women, and those with higher education had higher awareness about this issue. They also more preferred to use cell phones for non-talking purposes. Considering the potential risk of exposure to cell phone radiation, the medical team’s intervention is crucial to increase awareness about this matter.