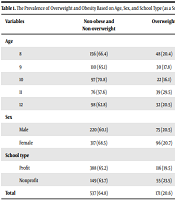 Overweight and Obesity Prevalence in Iranian Children Aged 8 - 12 Years; A Study in Tehran

The present study’s objective was to investigate the prevalence of overweight and obesity in children aged 8 to 12 years in Tehran, Iran.

In this cross-sectional study, 829 primary school children in Tehran were included. An investigator administered a checklist to collect the relevant data, and anthropometric measurements were performed using standard procedures. We used the World Health Organization’s (WHO) child growth standards to assess overweight and obesity among children. The Chi-square test was used to analyze categorical variables, and statistical significance was confirmed at P < 0.05.

Childhood overweight and obesity were relatively prevalent among 8 - 12-year-old children. So, obesity should be considered a serious health problem in Tehran, requiring more care and interventions to prevent an epidemic of obesity among Iranian children.

Obesity is increasingly known as a serious public health concern (1). Evidence suggests that its worldwide prevalence has increased dramatically in recent decades (2-6).

According to the World Health Organization (WHO), overweight and obesity in children and adolescents are defined as a body mass index (BMI) of 2 and 3 standard deviations above the WHO’s growth standard median, respectively (7).

Overweight and obesity are frequently observed among adolescents and children worldwide, a problem that is faced by all countries. However, they are more pronounced in low- and middle-income countries. At the current rate, it is predicted that the prevalence of overweight and obesity will be higher than that of the underweight by 2022 (8).

According to a systematic review by Bibilonimdel et al., the prevalence of overweight and obesity varies greatly across the world. Estimates show that about 30% of American adolescents and 22% - 25% of Europeans are either overweight or obese. So, this report shows that obesity is not merely a problem in third-world countries but also poses a health threat to developed countries and the whole world (9).

Childhood and adolescence obesity can contribute to the development of many diseases in adulthood. Evidence confirmed that premature obesity was associated with an increased risk of life-threatening diseases in the future, such as type 2 diabetes, hypertension, and coronary heart disease (11). Furthermore, obesity and overweight can increase the risk of disease-related death (12). Furthermore, childhood obesity also results in anxiety & depression, low self-esteem, and lower self-reported quality of life, as well as being bullied and stigmatized and developing diseases such as asthma, sleep apnea, cancer, fatty liver disease, and gastroesophageal reflux disease (13).

An important issue in obese boys is concealed penis, which can exaggerate anxiety and decrease self–steam and sexual function in the future (14, 15).

Despite the high priority of the problem, there are few studies on the prevalence of obesity among Iranian children. Given the importance of being informed about obesity prevalence and related factors in implementing preventive programs, the present study’s main objective was to determine the prevalence of overweight and obesity among 8 - 12-year-old children in primary schools in Tehran, Iran. There are two types of educational systems in schools in Iran, private and public, generally covering children with different socioeconomic levels, which was addressed in this study as a primary goal. Also, the samples were selected by cluster sampling to augment data validity. 3. Methods

This cross-sectional study was conducted on 829 primary school students aged 8 - 12 years recruited from several schools in Tehran, Iran, after checking for inclusion criteria. Children with the confirmed diagnosis of chronic diseases, including malignancy, diabetes, kidney disease, and heart disease, were excluded.

For selecting the subjects, we used multi-stage cluster sampling. We divided Tehran into five areas of the Northern, Eastern, Western, Southern, and Central divisions. After that, we obtained permission from the Education Department of each zone and observed the names and addresses of for-profit and not-for-profit schools.

In Iran, the duration of the primary school period is six years, so six classes were selected from each school.

For deciding about the body weight status of students, we used the MedCalc 3000 system. Height (cm) was measured by a standing meter with an accuracy of 0.5 cm, while children wore no shoes. The Beurer scale (Germany) was used to measure weight (kg) while children wore light clothing and no shoes. Body mass index (BMI) was calculated as follows:

Our protocol was approved by the Medical Research Ethics Committee of the Iran University of Medical Science under the code: IR.IUMS.REC.1394.04.140.26839. In addition, the Ministry of Education in Tehran granted us permission to conduct this study in selected schools. Consent forms were signed by children’s parents, and verbal explanations were given to children. A total of 920 children with their parents were invited to participate in this study; 53 students were excluded from the study because of having chronic diseases (two with anemia, one with migraine, one with chronic kidney disease (CKD), one with kidney stones, five with heart disease, two with glucose-6-phosphate dehydrogenase deficiency, two with recurrent urinary tract infections (UTI), one with nocturia, two with chronic sinusitis, two with gastroesophageal reflux disease, three with diabetes, two with hypothyroidism, two with epilepsy, one with thalassemia, 11 with asthma, and 15 with allergies). In addition, 13 other students were excluded because of providing incomplete information. Finally, a total of 829 children and their parents participated in this study.

Questionnaires were provided to the participants to fill out anonymously. The data gathered included the date of birth, weight, height, school type, sex, and history of chronic diseases.

Table 1. The Prevalence of Overweight and Obesity Based on Age, Sex, and School Type (as a Socioeconomic Variable) a

a Variables are expressed as No. (%).

The prevalence of obesity was higher in children from public schools than in those studying in private schools, but the chi-square test demonstrated that there was no significant association between the prevalence of overweight and obesity and the type of the school as a socioeconomic indicator (P = 0.33).

In parallel with economic developments in countries, the prevalence of obesity seems to have risen (28). Industrialization and changes in lifestyle are among other reasons for the obesity epidemic (29). So, obesity and overweight are major public health concerns across the world (1).

In our study, obesity prevalence was relatively high, which is consistent with the reported increasing trend of obesity in Iran (27). Evidence shows that an epidemic of obesity is expected in Tehran, highlighting its importance as a public health concern (30). Inappropriate diets, overeating, food insecurity, and sedentary lifestyle seem to have contributed to this situation in Iran (31).

Therefore, preventive planning and policies are necessary to reduce epidemic waves of obesity (1, 26). It has been shown that appropriate interventions can reduce the prevalence of overweight and obesity (32).

As a limitation of our study, the socioeconomic status of the children could not be cited due to the lack of accurate responses to questions such as monthly income, parents’ education, etc. So, the socioeconomic status was evaluated only based on the type of schools (private vs. public). Due to the importance of controlling childhood obesity, more community-based studies are recommended to analyze the current trend of obesity and implement more effective protocols in schools and society.

According to our results, childhood obesity and overweight are important health problems in Tehran. According to the findings of this study, the prevalence of overweight and obesity in Iranian children aged 8 - 12 years was directly related to gender, showing a higher prevalence in boys than in girls. On the other hand, no relationship was found between age and the prevalence of obesity and overweight. Considering the importance of the obesity epidemic in children and its probable complications, imposing medical expenses on families and the health system, it is essential to investigate obesity-related risk factors and to implement preventive planning to control obesity at the school level.

We are grateful to the Iran University of Medical Sciences for helping us with this project, as well as to all the students who provided us with information and participated in this study. The authors would like to show their gratitude to the Rasool Akram Medical Complex Clinical Research Development Center (RCRDC), Iran University of Medical Sciences, for its technical and editorial assistance.

Copyright © 2022, Author(s). This is an open-access article distributed under the terms of the Creative Commons Attribution-NonCommercial 4.0 International License (http://creativecommons.org/licenses/by-nc/4.0/) which permits copy and redistribute the material just in noncommercial usages, provided the original work is properly cited.
download pdf 184.90 KB Get Permission (article level) Import into EndNote Import into BibTex
Number of Comments: 0