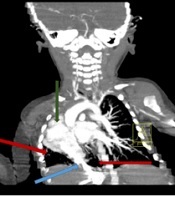 Scimitar Syndrome in a Newborn

Scimitar syndrome is a rare congenital condition that is usually presented in two major types, the infantile type as a severe condition with a poor outcome (median age: 2 months) and the adult type with a better condition and good outcome. It also has a wide spectrum of clinical presentations, from being asymptomatic in the adult type to cardiac and respiratory failure and pulmonary hypertension in the infantile type.

In this case report, we present a 43-day-old female case referred to Taleghani Children Hospital, Gorgan, Iran, with respiratory symptoms. In a physical examination, the case had a grade II/VI murmur, dextrocardia, and respiratory distress. In evaluations, the patient had severe stenosis proximal to the left common carotid artery after its origin. The heart and mediastinum were displaced to the right side, and the thoracic aorta was normal in size and orientation. bovine type of supra-aortic arch branches in the left-sided aortic arch, hypoplasia of the right upper lobe with severe hypoplasia of the right lower lobe were seen as well. There was sequestration adjacent to the right lower lobe with a dual feeder artery directly from the abdominal aorta and celiac branch and dual draining veins. Partial anomalous pulmonary venous connection was detected in the neck, and mediastinal computed tomography (CT) angiography with reconstructed views.. Bronchoscopy revealed right main bronchus hypoplasia and right lower lobe hypoplasia. Then, with the help of angiography, scimitar syndrome diagnosis was confirmed for the patient.

Although scimitar syndrome is an uncommon condition, it has serious complications and poor outcomes in some patients. It is necessary to be aware of this rare congenital condition and use helpful methods, such as CT angiography and angiography, to confirm the diagnosis.

One of the rare congenital cardiac miscreation syndromes is scimitar syndrome, which is presented by an abnormality in the drainage of pulmonary veins (PVs), specifically in the right lung vein that drains into the inferior vena cava (IVC) (1). This condition occurred in 2 out of 100000 births (2). There are two types of scimitar syndrome. Unfortunately, the infantile type is more severe than the adult type, which can lead to pulmonary hypertension and high mortality in patients (1). The symptoms include dyspnea, respiratory distress, cyanosis, heart failure, recurrent pulmonary infections, palpitations, and syncope (3). As mentioned above, it is an uncommon condition and hard to find, especially in under 2-month-old infants (similar to the present case); therefore, it was decided to present the patient as a case report.

A 43-day-old female infant was admitted to the Emergency Department of Taleghani Children Hospital, Gorgan, Iran, with the chief complaint of tachypnea that started about 2 weeks ago. The infant was term and born through vaginal delivery. The birth weight was 2800 g. There were no complications during pregnancy, labor, or delivery. Apgar scores were 8 and 9 respectively in the 1st and 5th minutes, respectively. The height, weight, and head circumference of the infant were over the 5th percentile. There was no history of hospitalization until current admission. There was no history of a congenital anomaly or respiratory dysfunction in siblings. The patient had no significant response to outpatient treatment. Her mother complained about the infant’s excessive sweating during breastfeeding with no description of poor feeding or cyanotic episodes.

In the physical examination, heart sounds (S1 and S2) had a regular pattern, and both were auscultated more clearly at the right side with a grade II/VI murmur. No excessive heart sound was recorded. Respiratory sounds diminished on the right side, and mild respiratory distress with subcostal retraction was observed. The pulse and respiratory rates were 160 and 74 beats per minute, respectively. 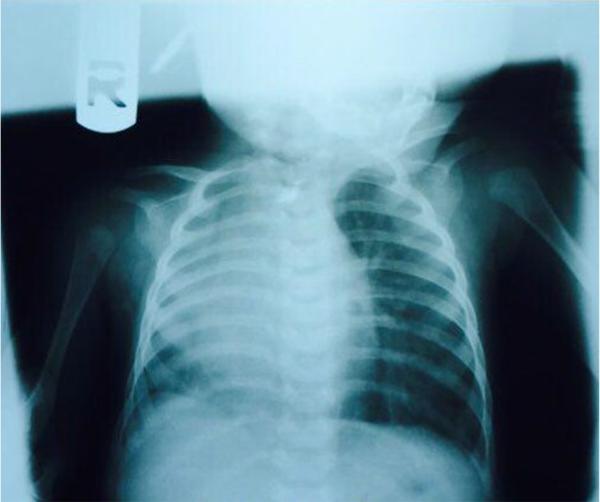 Initial chest X-Ray. Dextroposition of the heart and diffuse alveolar opacity in the right hemithorax.

Due to the persistence of symptoms, nonresponse to outpatient treatment, and abnormal examination findings, the patient was hospitalized. After admission and initial laboratory evaluation, consultation with pediatric pulmonary and cardiac specialists was ordered. According to pulmonary consultation, a spiral chest computed tomography (CT) scan with intravenous contrast to evaluate abnormality in the lungs and mediastinum, abdominal ultrasound, and prescription of systemic antibiotics were ordered.

A cardiac examination showed no pathologic findings. An electrocardiogram revealed normal sinus rhythm, and the right axis deviation with the corrected QT interval of 0.4 was recorded. Further echocardiography reported normal PVs to return to the left atrium, normal size 4 chambers, septa, and great vessels with an average ejection fraction of 60% and no valvar dysfunction, coarctation of the aorta (CoA), or patent ductus arteriosus (PDA). This study revealed no signs of congenital heart anomaly and suggested cardiac follow-up after 3 months.

In the laboratory evaluation, arterial blood gas showed primary respiratory alkalosis due to hyperventilation, and other results were hypernatremia and hyperkalemia; the rest of the laboratory tests were normal. Abdominal ultrasound demonstrated no pathologies.

Due to respiratory distress and her clinical features on the 3rd day of admission, the patient was transferred to the Pediatric Intensive Care Unit. Due to the patient’s response to infant oxygen hood, there was no indication for intubation, and nutrition therapy started through a nasogastric tube. During admission, she did not respond well to treatments, and her clinical presentations did not change as much as hoped; therefore, fiberoptic bronchoscopy was performed to evaluate other respiratory abnormalities for this patient. Fiberoptic bronchoscopy revealed right main bronchus hypoplasia and right lower lobe hypoplasia. Then, due to the bronchoscopy results, respiratory distress, and dextroposition of the heart, scimitar syndrome was propounded for the patient.

On the 5th day of admission, the nasogastric tube was discontinued, and PO (by mouth) nutrition started for the infant. After 2 days, breastfeeding started cautiously. Respiratory distress and electrolyte imbalance resolved. After 10 days, the patient was discharged in good physical condition and was referred to a CT angiography center for further investigation. In a neck and mediastinal CT angiography, there was severe stenosis in the proximal of the left common carotid artery after its origin. The heart and mediastinum were displaced to the right side. The thoracic aorta was normal in size and orientation (Figure 2A). 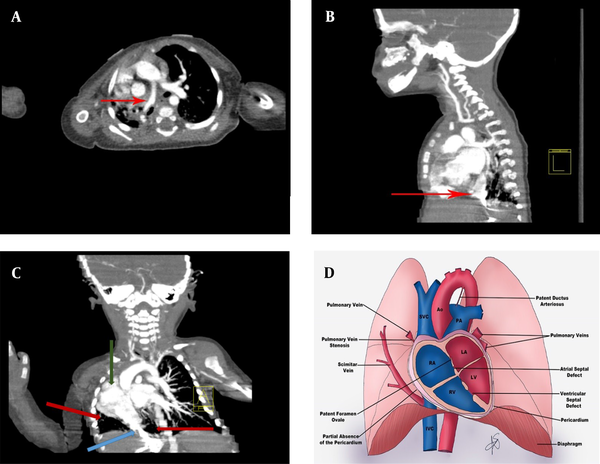 Multislice spiral CT angiography of the heart and major vasculature with special reconstructed views (with dynamic and delayed images with contrast medium) revealed dextrocardia, left-sided aortic arch bovine type of supra-aortic arch branches. The hypoplasia of the right upper lobe with severe hypoplasia of the right lower lobe were also showed in the CT scan. There was sequestration adjacent to the right lower lobe with a dual feeder artery directly from the abdominal aorta and celiac branch and dual draining veins, one coursing toward the transmidline to the left lower lobe PV and the other connected to dilated varicose vein connected to the right atrium (RA). Right middle and varicose right lower veins were both connected to RA. Partial anomalous pulmonary venous connection was seen, and there was no sing of CoA, PDA, atrial septal defect (ASD), or persistent left superior vena cava in our evaluation (Figures 2A-D).

According to the surgical report, in descending aorta injection at the anterior-posterior (AP) view showed that there is a right collateral artery which aimed to the lower lobe of the right lung and had no sign of CoA. The right pulmonary artery (RPA) and left pulmonary artery injection at AP and the right anterior oblique views showed left PVs and upper right PVs to the left atrium and right lower PVs to the IVC, hepatic vein (scimitar syndrome), and right lower lobe sequestration. In addition, one collateral artery was occluded with a 3-coil cook 6.5 × 5 mm successfully. After the completion of the procedure, the patient was in stable condition, and it was recommended for her to be evaluated in the near future for other collateral and right lower lobectomy.

After 3 months, another endovascular embolization was performed. The systemic sample was saturated with oxygen, and pulmonary artery pressure (PAP) was normal (mean PAP: 24 mmHg). For the recognition of the site of pathology, descending aorta injection at AP view showed collateral artery, and the RPA injection at AP view showed right lower lung lobe sequestration. The procedure result showed that the collateral artery was occluded with two coils 6.5 mm successfully, and clinical follow-up was recommended. Finally, the patient was discharged in good physical condition with stable vital signs. In further follow-ups, the patient had no respiratory or cardiac complaints.

Due to the wide range of clinical presentations in patients, this syndrome is divided by age and congenital malformation in patients into two types, infantile and adult types. The infantile type is observed in children under 1 year (median age: 2 months) and is associated with cardiac and respiratory symptoms, pulmonary hypertension, and undesirable consequences in patients. However, in the adult type, patients usually do not have any symptoms; therefore, they have better consequences (2, 5).

Congenital cardiac malformations are also observed in this syndrome. The ASD is the most common abnormality (80%), followed by patent ductus (75%), ventricular septal defect (30%), and PV stenosis (20%), respectively. Some other obstructive lesions also present on the left side, including stenosis in the subaortic area, CoA, hypoplasia of the arch, and Shone’s complex, related to this disease. The aforementioned conditions can worsen the left-to-right shunt and cause cardiac failure, especially in patients with septal defects (2).

Modalities that can guide physicians in diagnosing this condition are echocardiography, chest X-ray (CXR), and chest CT scan findings. Three-dimensional CT and magnetic resonance imaging of the heart are the best diagnostic methods for the syndrome, which fully show the abnormal anatomy of the heart and its arteries and veins (4).

For the confirmation of the diagnosis in patients, physicians should always order cardiac catheterization, find out the unusual drainage of PVs, recognize the stenosis that can be observed in the Scimitar vein (SV) or PVs, and distinguish the anatomy of pulmonary arteries and their pressure, level of a left-to-right shunt, and related cardiac malformations. It is possible to specify the improper transmission of the systemic circulation to the right lung. If it is required to correct this aberration through catheterization, it can be closed with the help of embolization material (2).

Patients with no symptoms and small left-to-right shunts do not need any intervention because, without any attempt to correct this defect, patients are not clinically affected and can live. However, in patients with clinically significant left-to-right shunt symptoms, it is necessary to perform correction surgery. In some cases, transcatheter occlusion can be used to reduce shunting. Overall, surgery is considered under the following conditions:

(3) In the setting of surgical correction treatment for other cardiac lesions (6, 7)

Finally, the surgical approach to correct scimitar syndrome varies depending on the anatomical and pathological features of each case and the surgeon’s preference. The prognosis for this form of infancy was also poor. In this study, due to the patient’s condition and anatomical abnormalities, surgery was performed on the patient, and the patient’s prognosis was good.

It is essential to pay attention to chest radiographic findings of scimitar syndrome because this syndrome can overlap with other causes of CXR pulmonary atelectasis and agenesis, and this syndrome should be considered in the differential diagnosis with these diseases, which can mislead physicians, delay the treatment of patients, and increase the risk of death for patients.

The limitation of this study was that due to the lack of advanced diagnostic tools in the initial treatment center, we had to transfer the patient to advanced centers for imaging and necessary procedures. Because delay in the diagnosis of scimitar syndrome causes mortality and advanced complications in infants and children, it is recommended that scimitar syndrome be included in the differential diagnoses for cyanosis with unknown causes and recurrent respiratory infections.

Copyright © 2022, Author(s). This is an open-access article distributed under the terms of the Creative Commons Attribution-NonCommercial 4.0 International License (http://creativecommons.org/licenses/by-nc/4.0/) which permits copy and redistribute the material just in noncommercial usages, provided the original work is properly cited.
download pdf 4.37 MB Get Permission (article level) Import into EndNote Import into BibTex
Number of Comments: 0