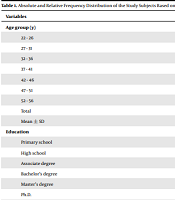 Breastfeeding benefits both mother and newborn and plays a significant role in controlling chronic diseases. Fathers' breastfeeding attitude and self-efficacy are their ability to help their partner breastfeed the newborn and appear to be among the factors that affect women’s breastfeeding.

This study was performed in 2019 on 206 fathers. Fathers waited for the mother and baby outside the postpartum ward and filled out the paternal breastfeeding self-efficacy scale and demographic information questionnaire in the hospital. Three months after delivery, mothers were called and asked about Infant and young child feeding practices. The SPSS software version 23 was used for statistical analysis by the Spearman’s test, independent t-test, Pearson’s correlation coefficient, chi-squared test, and analysis of variance.

Breastfeeding is the source of nutrients in children aged 6 - 23 months. It plays an important role in providing energy to babies aged 6 - 12 months, and one-third of energy needs between 12 and 24 months. Moreover, the mortality rate is lower in breastfed babies, and breastfeeding is also a critical source of energy and nutrients during illness (WHO). Breastfeeding is useful for the mother and the newborn and significantly controls chronic diseases (1). Statistics show that the lack of breastfeeding in developing countries contributes to the death of 1 child every 30 seconds and 1.5 million children annually, accounting for 70% of the neonatal mortality in these countries (2). Evidence suggested that 149 million children under five were stunted, 45 million were wasted, and 38.9 million were overweight or obese in 2020.

Factors such as the mother’s age and education, family income, family support, prenatal actions, decisions about the first breastfeeding, time of the first feeding, as well as maternal skills and self-efficacy, are effective in successful breastfeeding (3). Self-efficacy, the perceived ability to successfully perform a task, is an important principle linking awareness to action (3). Self-efficacy affects individuals’ decisions, choices, activities, and persistence (4). Fathers’ attitudes and support are alterable factors that significantly affect breastfeeding onset (5). Paternal breastfeeding self-efficacy denotes the father’s ability to help mothers breastfeed their newborn (6). Breastfeeding cessation may be due to the feelings of frustration and guilt or even helplessness in fathers as they might think that they cannot help, and starting formula feeding might seem the most straightforward solution (7).

Improved paternal breastfeeding self-efficacy and mothers’ perception of fathers’ cooperation and assistance show that programs to support parental cooperation in breastfeeding can benefit the parents (11). Given the recommendations of WHO about the role of breastfeeding in children’s health, the impact of parents’ self-confidence in this matter, and the more prominent role of fathers and their breastfeeding support, there is undoubtedly a need to conduct further studies on this subject.

This research seeks to determine the relationship between paternal breastfeeding self-efficacy and infant and young child feeding practice.

This descriptive-correlational study was conducted after obtaining the necessary approvals from the Ethics Committee of Shahid Beheshti University of Medical Sciences (ethical approval: IR.SBMU.PHARMACY.REC.1398.060). After the verbal consent, 220 couples were recruited for the study in a hospital in Karaj. Baseline data were collected from fathers and mothers in the hospital. Mothers were in the postpartum ward, and fathers waited for the mothers and their babies outside the postpartum ward. Follow-up data were collected from mothers three months postpartum via telephone. The inclusion criteria were the parents living together, not taking any medications affecting breastfeeding, singleton birth, birth weight over 2500 grams, gestational age of 37 weeks or more at delivery, normal Apgar score at birth, and no neonatal diseases or anomalies. The exclusion criteria entailed the lack of access to the subjects to complete the questionnaire three months after delivery and severe postpartum complications for the mother or newborn that had either separated them or led to their death.

Data were collected from fathers and mothers in hospitals and mothers three months after delivery. The data collected in the hospital included (1) personal characteristics, such as maternal and paternal age, education, and income; (2) mothers' midwifery characteristics, such as gravidity, type of delivery, and prenatal disease; (3) infant characteristics, such as gestational age and weight; (4) paternal breastfeeding self-efficacy. The data collected three months after delivery encompassed infants' feeding practices. The Breastfeeding Self-Efficacy Scale-short form (Appendix 1) (6) was used to assess paternal self-efficacy. This questionnaire consists of 14 items scored based on a 5-point Likert scale from “always confident” to “not at all confident." The lowest score is 14, and the highest is 70. This scale was initially developed in English and was translated into Persian using the forward-backward translation method. For this purpose, the English version of the scale was first translated into Persian by two translators with expertise in medical texts. Next, the translations were compared by two obstetricians who were also faculty members, and a Persian version of the tool was prepared by matching the items in terms of meaning and concept and selecting the best options. To ensure the expressiveness of the sentences in the Persian text and their match with the original text, the initial translated version was re-translated into English by two other translators who could speak English very well and had not seen the original questionnaire before. Afterwards, the two English versions were compared, and the necessary corrections were made. A single version of the Persian questionnaire was developed (12). In order to assess the questionnaire’s face validity, it was distributed among ten fathers, who were asked to comment on the legibility, clearness, writing style, grammar, and spelling of the words, as well as the ease of completing the tool. In the present study, the reliability of this questionnaire was confirmed by Cronbach’s alpha coefficient of 0.94.

Infant and young child feeding practices were assessed by the infant nutrition questionnaire three months after delivery via phone calls to the mothers participating in the study. This questionnaire was prepared using the WHO model and was distributed among ten faculty members of the Midwifery and Reproductive Health Department of Shahid Beheshti University of Medical Sciences for content and face validity evaluation. The final infant and young child feeding practice questionnaire was developed based on their comments. Infant feeding practices were assessed based on the practices in the last 24 h prior to the study as defined by WHO. This questionnaire includes questions about the breastfeeding methods of mothers, reasons to use infant formula, maternal physical and mental illness three months after delivery, mothers’ incentives for breastfeeding, and support and opposition of spouses and others for breastfeeding. A demographic information questionnaire was also designed for the study, and its content validity was approved. Data were analyzed by the SPSS software version 23 using descriptive statistical methods, including the frequency, percentage, mean, and standard deviation tables. Moreover, the inferential statistical methods included the independent t-test, analysis of variance, Spearman’s test, and chi-squared test. At the end of sampling, 14 people were excluded from the study, reducing the sample size to 206. The reasons for this sample loss entailed not answering the phone calls (n = 10), the mother’s unwillingness to continue cooperation (6), and the death of the infant (6).

In the present study, the mean age of fathers was 33.79 years. Table 1 presents the fathers' demographic characteristics, and Table 2 presents the infants' characteristics along with the infants feeding practices. Among the fathers participating in the study, 22.8% had participated in antenatal classes, and 67.6% had cooperated in prenatal care. In addition, 87.9% of fathers chose to breastfeed as their preferred feeding method for their infant during their wife's discharge from the postpartum ward. Furthermore, 85.9% of mothers reported receiving adequate paternal breastfeeding support three months after the delivery, while 2.4% of the fathers opposed breastfeeding during three months postpartum. Among the reasons for their opposition were thinking that breast milk was insufficient, being concerned about the mother's comfort, and the deformation of mothers’ breasts due to breastfeeding. Table 3 demonstrates the relationship between paternal self-efficacy score and the examined variables, indicating that only two variables, namely the father’s cooperation in prenatal care (P = 0.0001) and the father’s attendance of antenatal classes (P = 0.0003), were correlated with paternal self-efficacy score. Table 4 shows the relationship between infant and young child feeding practice and the study variables. The father’s support for the mother in breastfeeding was the only variable correlated with the feeding practice (P = 0.006).

Table 1. Absolute and Relative Frequency Distribution of the Study Subjects Based on the Fathers’ Demographic Characteristics

Fathers’ support is a modifiable and alterable factor. Parental cooperation in breastfeeding offers an ideal framework for designing interventions to raise fathers’ involvement and help the parents work together to meet their breastfeeding goals (15). In the current investigation, a significant relationship was observed between fathers' support for breastfeeding three months after delivery and infants' feeding practices three months postpartum (P = 0.006). This finding is consistent with the results of another study (9), which showed that although fathers' attitudes were effective in supporting breastfeeding, infant and young child practice three months after delivery was not correlated with occupation, education, income, housing status, father’s attendance to antenatal classes, father’s cooperation in prenatal care, and father’s decision on the type of neonatal feeding at the time of discharge (18). Moreover, fathers' attitudes were not correlated with the duration of EBF.

This article was extracted from the M.Sc. dissertation of Ms. Seyedeh Zahra Kiyaei Molasaraei in Midwifery, supervised by Dr. Shahnaz Tork Zahrani at Shahid Beheshti University of Medical Sciences. The researchers wish to express their gratitude to the Research Deputy of Shahid Beheshti University of Medical Sciences and the officials of Alborz Hospital, especially the staff of the postpartum ward and all the women who participated in this study.

Copyright © 2022, Author(s). This is an open-access article distributed under the terms of the Creative Commons Attribution-NonCommercial 4.0 International License (http://creativecommons.org/licenses/by-nc/4.0/) which permits copy and redistribute the material just in noncommercial usages, provided the original work is properly cited.
download pdf 107.01 KB Download Supplementary Material Get Permission (article level) Import into EndNote Import into BibTex
Number of Comments: 0