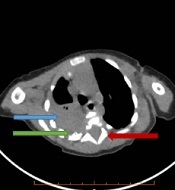 Neuroblastoma (NB) is one of the most common malignant extracranial solid tumors in children, mainly detected in children between the ages of 22 months to five years. It can develop in any location of the sympathetic nervous system. Although it has a broad spectrum of signs and symptoms, it is hard to find cases with major respiratory manifestations.

Our case report presents a 50-day-old male admitted to a local hospital with respiratory distress and cyanosis. Then, he was intubated and transferred to our pediatric center for further evaluation. Our investigation found a mass in the mediastinum with lung involvement. This patient is a rare case of neuroblastoma that occurred earlier in the age of onset with uncommon respiratory manifestation, unresponsive to outpatient treatment.

Neuroblastoma is one of the children's most common extracranial solid tumors originating in the peripheral sympathetic nerves. Its prevalence is up to 8 - 10% of all childhood tumors. The manifestations of neuroblastoma vary according to the anatomical location, tumor size, invasion degree, and association with paraneoplastic syndromes (1, 2). Neuroblastoma can spread to multiple organs, such as regional or distant lymph nodes, bone marrow, skull, and liver. The lungs and brain involvements are rare. The median age for neuroblastoma diagnosis is 22 months, and it is detected in most patients by the age of five years old. The etiology of neuroblastoma remains unknown in most cases (3, 4). Genetic causes and mutation are responsible for 1 - 2% of all cases (5).

Most cases have adrenal (about 90%) and abdominal origination, and other sites such as thorax (similar to our case) and pelvic are less common (6). Some rare symptoms are very indicative of neuroblastoma. These manifestations are cerebellar encephalopathy (2 - 8%), Claude Bernard-Horner syndrome (1 - 7%), lower extremity paralysis due to intrathecal, epidural spread of the tumor (4%), severe uncontrollable diarrhea caused by vasoactive intestinal peptide (VIP) (4%), and arterial hypertension, flushing, and excessive sweating periods are caused by increased catecholamine concentrations (0 - 2%) (3, 4).

For diagnosing neuroblastoma, selective diagnostic methods include radiographic imaging with ultrasound, computed tomography, and magnetic resonance imaging. Ultrasound in prenatal can detect fetal tumors in 80% to 85% of cases. In some cases, we also can use plasma catecholamines such as dopamine and norepinephrine and their metabolites in urine, homovanillic acid (HVA), and vanillylmandelic acid (VMA) (7, 8).

To date, there is no standard treatment for neuroblastoma. Depending on the site of involvement and the inability to diagnose and operate the primary tumor, the recommendation depends on chemotherapy guidelines (9). The neuroblastoma diagnosis can also be confirmed by pathologic evaluation of a tumor biopsy (10).

We report a case of neuroblastoma with acute respiratory symptoms, abnormal examinations, and failure to respond to outpatient treatment. Neonatal respiratory infections like pneumonia are common in newborns (11). They are usually caused by bacterial, viral, fungal, or protozoa organisms transmitted to infants from their mothers or community (12). These diseases can have the same signs and symptoms as our case, leading to negligence in neuroblastoma diagnosis with respiratory features. In addition, although neuroblastoma is a common solid tumor in infants, case reports about newborn neuroblastoma patients with a respiratory presentation are extremely rare, so we decided to present this case.

In his maternal history, there were no complications during pregnancy and delivery. His birth weight was 3,060 gr. In addition, he had no history of hospital admission, and there were no congenital birth defects in his siblings.

First, his parents took him to a local hospital with systemic cyanosis and respiratory distress. Due to low O2 saturation, he was intubated and then transferred to our hospital.

On admission, a physical examination showed tachypnea; his respiratory rate was 45/min, pulse rate was 166/min, body temperature was 37.7°C, and oxygen saturation level was 98% with supplemental oxygen therapy. We found decreased right lung sound. In addition, heart sounds (S1 and S2) had a regular pattern, and his neuromuscular examination was normal. His weight was 3,600 g (5%), his height was 54 cm (10 - 25%), and his head circumflex was 37 cm (50%).

After admission, he was transferred to the Pediatric Intensive Care Unit (PICU), and medical therapy and Synchronized Intermittent Mandatory Ventilation (SIMV) mode started. Due to respiratory symptoms, initially, we took a chest radiography. An opacity of the middle lube in the right lung that shifted the mediastinum and heart to the left side of the thorax was seen, and no sign of soft tissue or skeletal pathology was reported.

His pediatric cardiology consultant's electrocardiography (ECG) revealed normal sinus rhythm and axis. Echocardiography showed normal left ventricular ejection Ffraction (LVEF: 60%) and mild pericardial effusion. This study revealed no signs of congenital heart anomalies. We also ordered mediastinal and abdominopelvic sonography for the patient. His sonographies showed a calcified mass in the middle part of the right lung and mild pericardial effusion with no abnormality in the abdominopelvic area.

Then, we performed chest computed tomography (CT), which showed a 34 × 27 mm calcified heterodense mass in the middle of the right side of the posterior mediastinum. Widening of a neural foramen in T3 - T4, a periosteal reaction in the posterior arch of the fourth rib, and consolidation in the lower lobe of both lungs was also seen (Figure 1A and B). 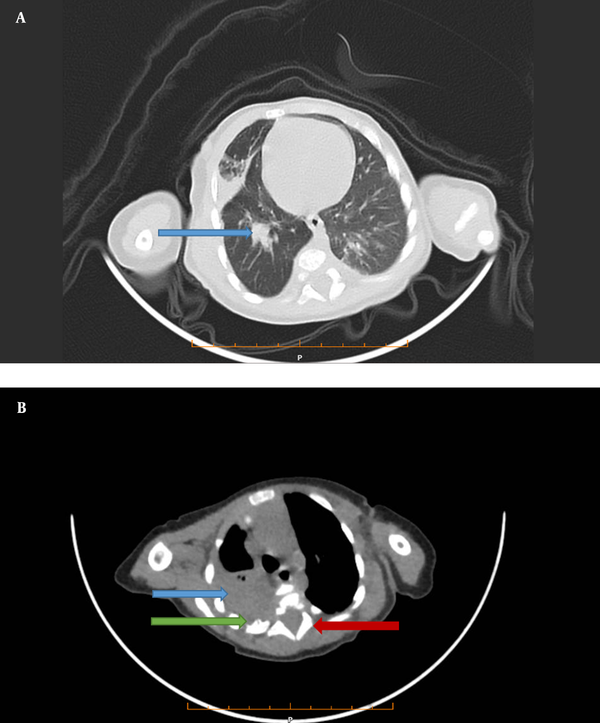 Laboratory tests showed leukocytosis (lymph 70%), anemia, and thrombocytosis. Erythrocyte sedimentation rate (ESR) was 40, aspartate aminotransferase (AST) was 68 u/L, and C-reactive protein (CRP) was positive. Then, due to the patient's chief complaint and the fact that tuberculosis was expected in this area, we screened a purified protein derivative (PPD) test for tuberculosis, which returned negative. In addition, screening tests for COVID-19 were negative, too.

We suggested a biopsy on the mass. The pathological report confirmed a malignant small round cell tumor compatible with neuroblastoma with a positive result for malignancy in the pericardial effusion sample. Another pathologist confirmed the diagnosis of neuroblastoma. Then, immunohistochemistry (IHC) was performed on the specimen. In the IHC report, chromogranin, synaptophysin, and neuron-specific enolase (NSE) markers were positive, whereas CD99 and Anaplastic lymphoma kinase (AK1) markers were negative, confirming our diagnosis (Figure 2A-C). 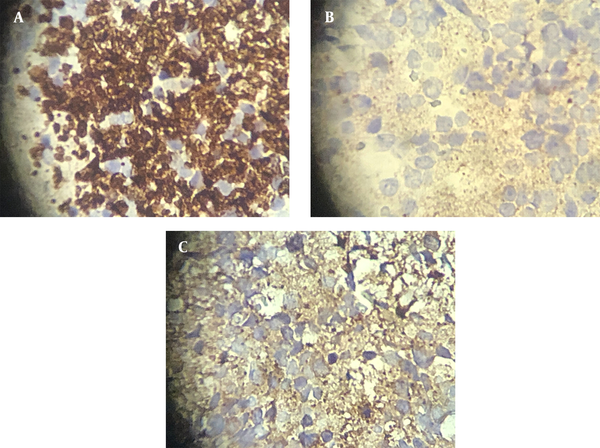 According to the patient's condition, the mass was resected entirely during the biopsy. After confirming our diagnosis and stage 1 neuroblastoma according to The International Neuroblastoma Staging System (INSS), chemotherapy was ordered for the patient. After the surgery and standard chemotherapy, his condition became stable, and respiratory symptoms resolved; we discharged and suggested continued treatment as planned.

In this study, we presented a case of neuroblastoma with a rare respiratory manifestation that did not respond to outpatient treatment. The patient was admitted to his hometown hospital with respiratory distress, tachypnea, cyanosis, and low oxygen saturation. Then, he was intubated and transferred to our pediatric hospital based on his condition. Due to non-responding to outpatient respiratory infection and lung involvement in chest X-ray, we evaluated the patient by considering his general condition and medical record, leading us to the neuroblastoma diagnosis.

Neuroblastoma is an immature tumor originating in the nervous system, which is a common fetal malignancy in childhood. The causes of neuroblastoma are often unknown (5). Most cases have an adrenal or abdominal origin, but signs and symptoms are based on the tumor's size, progression, and stage. The metastatic patient can develop a broad spectrum of signs and symptoms, but localized neuroblastoma can manifest as an asymptomatic mass or cause mass-effect symptoms (10).

Neuroblastoma can involve any site in the body, so paying attention to any symptoms and having clinical suspicion in patients is crucial. In this case report, our patient had respiratory symptoms treated outpatient with a diagnosis of respiratory infection in the past two weeks before admission, but his condition worsened. Neuroblastoma can be detected with prenatal sonography in 85% of cases (13), but there was no evidence of neuroblastoma in our patient prenatal evaluation.

Although the mean age for disease incidence is 22 months, most patients are five years old at the time of diagnosis. However, in this case, neuroblastoma was diagnosed at a younger age (50 days old), and timely diagnosis according to the age of patients was one of the positive practices of physicians in this study.

In our case report, we had a patient with thoracic involvement, which has been reported only in a few patients (11 - 26%) (14). Kazemian et al. presented a 17-day-old infant with respiratory manifestation similar to our case. In their survey, the patient had a mass in the right upper lobe with severe mass compression to the trachea and spinal canal. They suggested that physicians should always predict neuroblastoma for infants with persistent symptoms (8).

In some cases, although the patients do not have a thoracic involvement, because of the abdominal involvement, they experience respiratory manifestations. For example, a case report by Alan et al. presented a male newborn with hepatomegaly, inferior vena cava syndrome, and respiratory distress due to neuroblastoma (15).

We faced limitations in our survey. We had to send biopsy samples to Tehran for IHC because we did not have the facilities in our province, which could delay diagnosis and treatment. We had to transfer the patient to other centers for CT scans and MRIs due to the lack of equipment in our hospital. There was a concern and risk about transferring the patient with respiratory manifestation to other centers, and we could not easily access the CT scan and MRI of the patient. On the other hand, due to the rare condition of the case, there were limited studies about neuroblastoma with respiratory complaints, especially at early ages.

According to neuroblastoma guidelines, neuroblastoma can be challenging to diagnose due to its heterogeneous clinical presentation. Neuroblastoma manifestations can be similar to non-malignant disease and may confuse disease diagnosis. Thus, physicians must be concerned about neuroblastoma in patients with persistent respiratory symptoms. Moreover, tumor variability and nonspecific presentation contribute to late diagnosis and disease progression. Delayed and inaccurate tumor diagnoses constitute a significant obstacle due to limited radiological and pathological resources (16), leading to poor patient outcomes.

Copyright © 2022, Author(s). This is an open-access article distributed under the terms of the Creative Commons Attribution-NonCommercial 4.0 International License (http://creativecommons.org/licenses/by-nc/4.0/) which permits copy and redistribute the material just in noncommercial usages, provided the original work is properly cited.
download pdf 7.08 MB Get Permission (article level) Import into EndNote Import into BibTex
Number of Comments: 0