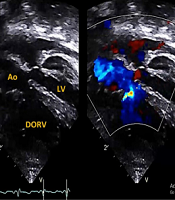 This is a case of neonatal CdLS that we think is interesting due to its association with a novel congenital heart complex.

Patients with CdLS have a high incidence of congenital heart disease (CHD), so a cardiologic study of all of these patients is suggested.

Cornelia de Lange syndrome (CdLS) is a rare genetic syndrome (estimated incidence is 1/15,000 live births) that is linked to some chromatin regulator gene abnormalities, most notably structural and regulatory genes of the cohesion complex (1).

Although the presence of heart disease is not a major criterion of the disease (which occurs in only one-third of patients), it represents one of the main causes of death in the neonatal period (3). However, few studies link the incidence and type of heart disease with the symptoms and mutations of the CdLS main causative genes (4). Therefore, we decided to report a rare genetic case of CdLS with unusual cardiac problems.

A 24-hour-old male newborn was admitted to the NICU with the diagnosis of respiratory distress syndrome. During regular perinatal ultrasound follow-up, intrauterine growth retardation, asymmetric upper limb malformations, and fetal anomalies in the facial profile were detected.

The baby was born after a 33-week gestation as the only child of a non-consanguineous marriage via elective CS (due to the fetal condition). Apgar scored 6 and 8 in the 1st and 5th minutes. On physical examination, the baby was cyanosed (O2 saturation was 65%), his birth weight was 1.1 kg, and he has dysmorphic features in the form of microcephaly, synophrys, short nose, long eyelashes, low set ears, depressed nasal bridge, anteverted nasal tip, thin upper lip, long philtrum, high arched palate, short upper limb, missing fingers "two small fingers in each hand," hypospadias, undescended testicle (Figure 1). 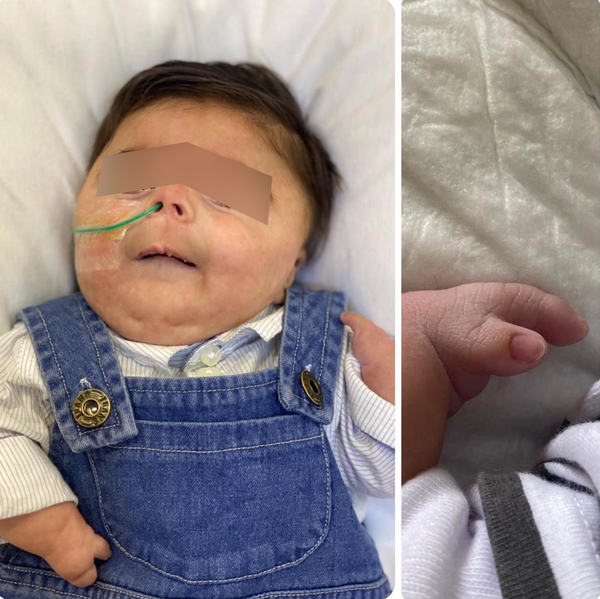 Clinical phenotype of the case

Auscultation of the heart revealed a 2/6 systolic murmur. A central line was inserted, and he was started on continuous feeding through a nasogastric tube.

Except for recurrent hypoglycemia, which was diagnosed as perinatal stress-induced hyperinsulinism, all laboratory tests, including a complete blood count and biochemical markers, were normal. He was therefore started on octreotide (15 mcg TID SC injection). 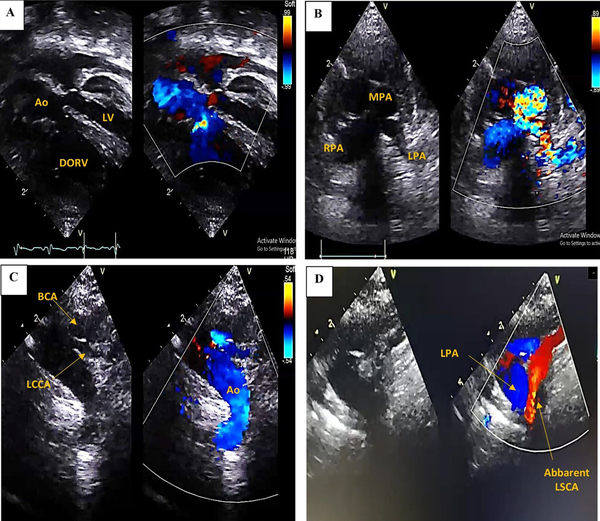 A normal male karyotype (46, XY) was discovered through karyotype analysis. CdLS was confirmed by molecular testing (Heterozygous frameshift mutation in the NIPBL gene). There was no known family history of CdLS or any other chromosomal abnormality in the family.

The baby was admitted to the NICU on mechanical ventilation for two months, then discharged to the general ward. During the hospital stay, the baby’s family met with a pediatric cardiologist, geneticist, ophthalmologist, physical therapist, and social worker. Initial goals included meeting adequate nutritional requirements and managing all medical needs. Long-term goals included coordinating the multidimensional healthcare team and formulating a long-term care plan. One month later, the baby was discharged home with a nasogastric tube and was requested to follow up regularly.

Cornelia de Lange syndrome is a congenital malformation syndrome that is both rare and well-known. CdLS can have a wide range of phenotypic manifestations, and there are two primary spectrums of the disease: classic and mild CdLS. Clinical severity is normally determined by the score described in Kline et al. (5). Our case showed multiple craniofacial and skeletal deformities, growth retardation, multiorgan abnormalities, and cognition delay symptoms of classic CdLS. The incidence of congenital heart abnormalities in classic CdLS patients is around 30 - 35 percent (3). The mild spectrum of CdLS has many of the same facial traits as the classic phenotype but with less cognitive and limb or structural involvement (5).

Our case reported a novel cardiac finding (DORV, TOF type) associated with the classic phenotype of CdLS. According to several studies, the most common defects were pulmonary stenosis and ventricular and atrial wall defects, followed by aortic coarctation, bicuspid aortic valve, hypertrophic cardiomyopathy, and others (3, 6-8). The presence of heart disease is associated with a higher need for neonatal hospitalization and a mortality rate that triples that of non-cardiac patients, with 19.2 % of cases requiring cardiac surgical correction (3). The goal of medical and surgical treatment for CdLS is to avoid possibly curable complications.

Multiple anomalies in the structure and regulatory genes of the cohesin complex - a ring-shaped chromatin regulator - were discovered after reviewing the genetic background of CdLS in the literature. There are currently five known CdLS causative genes: (1) the main anomaly is mutations in the nipped-B-like protein (NIPBL) gene, which are found in 60 to 70% of patients and have been linked to a more severe phenotype; while mutations in (2) structural maintenance of chromosomes protein 1A (SMC1A) gene; (3) structural maintenance of chromosomes protein 3 (SMC3) gene; (4) double-strand-break repair protein rad21 homolog (encoded as RAD21) gene; and (5) histone deacetylase 8 (HDAC8) gene mutations are found in 5 - 10% of cases and are related to mild-to-moderate phenotypes. Other pathogenic mutations in chromatin-associated factors have been linked to disorders that overlap with CdLS and cause CdLS-like symptoms (4).

Compared to the general population, life expectancy is expected to be 10 - 20 years shorter, depending on the severity and number of complications. The leading causes of death are untreated heart defects, respiratory and gastrointestinal diseases, and seizures (9, 10).

Because prenatal ultrasonography can detect many abnormalities, this report recommends using it in any baby with intrauterine growth retardation (IUGR). Prenatal detection of such anomalies can help to avoid delays in diagnosis and multidisciplinary care for these infants after birth (11). Furthermore, overuse of this modality in normal pregnancy may cause parents to be concerned and primary care providers to use unnecessary diagnostic modalities. Guidelines are the best way to manage patients with such anomalies. Furthermore, as seen in the precise antibiotic use, guidelines can assist primary care providers with proper management (12).

Given these patients' high morbidity and mortality, it is recommended that an early cardiologic study be performed to establish an early diagnosis and treatment. The genetic study may be useful not only for confirming clinical suspicions of disease but also for determining the severity of the phenotype.

Copyright © 2022, Author(s). This is an open-access article distributed under the terms of the Creative Commons Attribution-NonCommercial 4.0 International License (http://creativecommons.org/licenses/by-nc/4.0/) which permits copy and redistribute the material just in noncommercial usages, provided the original work is properly cited.
download pdf 9.80 MB Get Permission (article level) Import into EndNote Import into BibTex
Number of Comments: 0