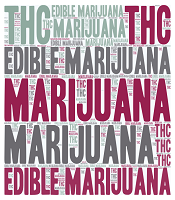 Disguised Marijuana Edibles as a Public Health Concern in Pediatrics

Tetrahydrocannabinol (THC) toxicity has been well-documented in adults after ingestion of marijuana-containing products, however, in young children and adolescents, there have been smaller numbers of case reports. In the U.S., a recent surge in the legalization of marijuana has influenced and popularized its increasing accessibility. This has led to increasing numbers of pediatric patients exposed to, and essentially poisoned by THC. Here, we present a case report detailing accidental THC overdose, and highlight implications this danger poses to public health.

A young girl presents to the Emergency Department with dizziness, nausea, and slowed speech for several hours duration after ingesting “Oreos” given to her by a friend. The mother presented the packaging, labeled as “Double Stuf Stoneo” cookies, containing 250 mg of THC per cookie. Her vital signs were stable with a blood pressure of 106/69 mmHg, a pulse of 140 per minute, respiratory rate of 12 breaths per minute, a temperature of 36.8°C, and SpO2 of 99%. During the physical examination, she appeared sleepy, with conjunctival injection present bilaterally. The physical examination was otherwise unremarkable. Her urine drug screening was positive for THC, with urine creatinine of 450 mg/dL. The patient was held for observation for several hours and discharged after symptoms subsided.

Cannabis (Cannabis sativa, "marijuana") is the world's most widely used illicit substance (1). In all forms, cannabis has been reportedly used for pain management, anxiety disorders, and for recreational use in adults (2). Cannabidiol (CBD) and THC are two of the most prominent phytocannabinoids found in the cannabis plant and have non-psychoactive and psychoactive effects, respectively (3). Specifically with the use of edible marijuana, adverse effects including poor cognitive performance, transaminase elevations, sedation, sleep disturbances, infection, and anemia, have been reported (4). Prescription medications, such as SSRIs, have also been used for anxiety disorders in pediatric patients (5). Like certain prescription anxiolytics (such as SSRIs), THC may also cause vertigo, fatigue, poor cognitive performance, and sedation (6). Differentiating between THC and SSRIs becomes difficult, as urine drug screen (UDS) - the primary diagnostic measure to detect THC in the body - is ineffective at detecting medications causing similar side effects, like SSRIs. Multiple studies have also linked SSRIs to cause false-positive UDS results (7). These points become imperative, as overlapping side effects of both edibles and prescription medications and false-positive UDS results can easily lead to negligence and misdiagnosis.

Since the legalization and decriminalization of marijuana, increased rates of severe intoxication and ICU admissions have been reported (8). Product advertisement and lack of parental awareness pose vulnerable pediatric populations to increased exposure to these potentially dangerous edibles. Manufacturer tactics - such as mimicking name-brand food packaging - have masqueraded products concentrated with THC as commonly eaten snacks, leaving children as primary targets of advertisement. Lack of parental awareness regarding these counterfeit products can also lead children to increased exposure and accidental ingestion of edibles. These obstacles have made edible marijuana more accessible to children than ever before.

This case report emphasized several public health issues regarding accidental pediatric exposure to edible marijuana, including the strategic disguise of typical snacks and lack of paternal awareness. An observational study performed by Whitehill et al. revealed that 87% of marijuana exposure among children occurred by ingestion, with 96% of those being unintentional (9). In the patient's case, she unknowingly ingested a high dose of THC. These statistics and the issue we encountered pose many questions. Who is responsible for monitoring and regulating these products? Is this an urgent public health concern? How can we prevent children from unintentional exposures?

There is no simple answer. We propose the behavioral theory of the socio-economical model to address this issue at all levels of society. Children should be educated about the harm of these masqueraded products. Social media platforms could be used to disseminate information. Parents should be empowered to monitor and speak up against pediatric exposure to marijuana. Local communities may also support this cause by looking out for the sale of these products in popular places, such as convenient stores and notifying authorities appropriately. Legal intervention by policy change is also needed to combat this growing concern.

These goals could be achieved with litigation, as presented by MacCoun and Mello (10). We suggest the involvement of courts, such that the children injured or hospitalized by ingestion of disguised edibles may bring injury claims seeking damages against manufacturers and retailers. Genuine food companies may also pursue action by filing trademark-infringement suits against companies advertising edibles that resemble non-marijuana products.

In summary, marijuana edibles are a potential threat the wellbeing of pediatric populations. Appropriately diagnosing THC intoxication can also be difficult considering other substances may mimic its side effects. As pediatricians, we should advocate for close oversight and regulation of these products. It is also imperative that clinicians are thorough in clinical investigations. Public health agencies could be essential in reaching out to the community and educating them to influence this change.

Copyright © 2022, Author(s). This is an open-access article distributed under the terms of the Creative Commons Attribution-NonCommercial 4.0 International License (http://creativecommons.org/licenses/by-nc/4.0/) which permits copy and redistribute the material just in noncommercial usages, provided the original work is properly cited.
download pdf 75.17 KB Get Permission (article level) Import into EndNote Import into BibTex
Number of Comments: 0