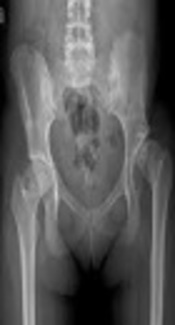 Developmental dislocation of the hip joint is among joint abnormalities and lack of its early diagnosis leads to irreversible complications and disabilities.

The current cross sectional study was conducted on 210 eighteen - month - old premature infants. Premature infants at term gestational age were examined by a neonatologist and underwent a sonographic scanning by a skilled radiologist. The results of the physical examination and ultrasound reports were collected and analyzed.

Developmental dislocation of the hip (DDH) is among the most important joint disorders of childhood and is caused due to staying out of the femoral head from the acetabulum cavity (1). The exact cause of this disorder is unknown; but, several factors are involved including positive family history, gender, age, oligohydramnios, race and intrauterine fetal position (1-4). The actual prevalence of this disorder is unknown, but it is reported 1.5 per 1000 to 20 per 1000 living births (5). It is more prevalent among females due to the production of maternal relaxin hormone and occurs as unilaterally or bilaterally before, during, or shortly after birth (6). Several studies show higher prevalence of this complication on the left side, which may be due to left anterior occiput position prevalent in non - breech babies (7). Swaddling also increases the risk (8). When the femoral head is out of its place, the normal growth stops and infants have relative ligamentous laxity at birth (9, 10). Early manifestations of the disorder are rare and it is mostly diagnosed with the Ortolani and the Barlow maneuvers based on the Ortolani and the Barlow clinical symptoms (11, 12). In the Ortolani test, a dislocated hip is reduced and it is felt by the click sound heard when the femoral head is fixed (11). The Barlow test shows the femoral head dislocation in the acetabulum cavity in an unstable hip (12). The Ortolani and the Barlow tests should be conducted separately for each hip joint (11, 12). The Ortolani and the Barlow tests are no longer positive from the week eight to twelve (13).

Gradually, permanent symptoms and complications of the disease such as inconsistency of folds in gluteal area, reduced abduction, limping, osteoarthritis, and short limbs appear; hence, the delay in diagnosis is associated with severe and irreparable complications (9, 10). Ultrasound is the gold standard diagnosis method (14, 15). For early diagnosis of the disease, it is necessary to be equipped with clinical skills during the physical examination phase. Radiography and ultrasonography are also used to confirm the diagnosis in suspected cases (16-18). Since clinical symptoms are not always detectable, some cases could not be diagnosed at early stages, which leads to serious and irreversible complications (9, 10). Several studies are conducted to compare the diagnostic value of ultrasound to evaluate the clinical examination to diagnose congenital hip dislocation in preterm infants. Preterm refers to a baby born before the week 37 of pregnancy (19-23) and there are few studies on the subject of DDH in premature newborns (6); therefore, the current study aimed at investigating the value of comparative clinical examination and assessment of ultrasound to diagnose DDH in premature newborns due to the importance of early diagnosis of hip dislocation.

Physical examination of the infant hip is part of the baby examinations, but it is often insufficient to diagnose DDH, because in some dysplastic hip joints it is unstable, slippery or moving, especially if remained undiagnosed by a less experienced person; or sometimes normal joint may be considered a pathological case by mistake (false positive) (24, 25).

The current descriptive, cross sectional study was conducted on preterm infants born from 22 March 2013 to 21 March 2015 in Akbar Abadi teaching Hospital in Tehran, Iran. A total of 210 premature infants reaching the age of full - term were examined by a neonatologist and after completion of the proposed questionnaire (including positive family history, gender, gestational age, oligohydramnios, race, and intrauterine fetal position) were referred to a radiologist for ultrasound hip scanning. Infants with genetic and structural defects and symptoms of intrauterine infection or early sepsis were excluded from the study. Clinical examinations included the Ortolani and the Barlow tests conducted separately on each hip. Ultrasound was conducted using multi - frequency linear probe and MedicalC260 6 - 8MHZ ultrasound device in a static - dynamic state. In static position, the newborn or infant was placed in the supine position and legs were put in the parallel mode, and the ultrasound probe was adjusted in the outer margin of the hip joint using coronal slices. Specific alpha and beta angles and ultrasonic type joints were later determined. In the dynamic control, knees were placed in the flexion state and after applying the posterior and lateral pressure on the femurs, the displacement rate of the femoral head was recorded. The cases with femoral head displacement rate of less than 6 mm were considered as hypermobile (non - morbid), and cases with displacement greater than 6 mm, were diagnosed with morbid dislocation. The complete dislocation and subluxation refer to the states where the femoral head is completely out of the acetabular cavity and in case of a brief displacement, respectively. Then, ultrasound report of infants was compared with the examination questionnaire. Finally, necessary information was extracted in accordance with the objectives of the study and was later analyzed with SPSS. The following formula extracted from the study by Sezer et al., was used to calculate the sample size; P = 0.12 was considered as the level of significance and d parameter (estimation accuracy) was set to 0.04 (N = 210).

At the end of the current study, which aimed at investigating the prevalence of congenital hip dislocation in premature infants referred to Akbar Abadi Hospital in Tehran, 210 infants were studied. The mean gestational age was 32.3 ± 2.5 weeks (ranged 25 to 36). (Diagram 3); 108 infants were female (51.4%) and 102 (48.6%) male (Diagram 1). The mean birth weight was 1618.3 ± 426.6 g (ranged 600 to 2850) (Diagram2). In the current study, 155 (73.8%) and 55 (26.2%) infants were born by cesarean section and normal vaginal delivery, respectively. A total of 24 infants (11.4%) were twins. The positive family history existed in three patients (1.4%). Also, oligohydramnios was observed in 10 infants (4.8%). Breech and cephalic presentation was observed in 28 (13.3%) and 182 infants (86.7%), respectively. Hip dislocation was observed in 17 infants (8.1%) during the sonography examination. All the infants had at least one risk factor and 193 infants (91.9 %) were normal while the clinical assessments for hip dislocation were positive in 22 infants (10.4%). As shown in Table 1, the mean gestational age and birth weight were significantly lower in the group with dislocation than the normal group (P < 0.05). As shown in Table 2, the prevalence of dislocation in the twin babies was significantly higher than other infants (P = 0.001), while there was no statistically significant difference between infants with dislocation and the normal ones in terms of gender, type of delivery, type of presentation, family history, and oligohydramnios (P > 0.05). Twin pregnancy, gestational age, and low birth weight were among factors affecting increased risk of DDH. Also, the clinical examination had high sensitivity and specificity for the diagnosis of DDH.

Table 1. Comparison of Qualitative Factors in the Studied Cases

Results of the sonography showed that the mean gestational age and birth weight were significantly lower in the group with hip dislocation than the normal group.

Table 2. Comparison of the Qualitative Factors in the Studied Cases

Results of the sonography showed that the prevalence of dislocation in the twin babies was significantly higher than regular infants.

However, the clinical experience and medical skills in hip physical examination and radiologist’s skills in sonographic evaluations are considered as the most important parameters to diagnose DDH; in addition to the specialist’s experience, infant’s restlessness during examination may lead to misdiagnosis both in the clinical and sonographic examinations (41). However, although examiner’s precision and experience is very important to diagnose hip dislocation or subluxation, not all consequences of non-compliance with this assumption can be justified. Besides, the Barlow and the Ortolani tests usually remain positive only during a few weeks (2 - 3 months) and finally the hip joint is fixed in the wrong or less right position (11, 12). In contrast, determining the quality of clicks depends on the personal perception and there is always a controversy over its accuracy. However, given the need to put the hip in a position very different from the normal range; i e, putting the hip in a certain position to create a complete dislocation and severe weakness certain sound quality clicks are less important. However, it is important to hear any clicking sounds of the hip (13). Orthopedic surgeons are the best individuals to conduct pelvic examinations in infants and periodic medical examinations are usually performed by them. However, it should be mentioned that repeated clinical examinations can reduce the loss of stability of the knee and hip (42, 43). Based on high specificity of clinical examination, negative dislocation can be largely relied on patients with negative clinical test (44). The ideal screening test should be simple, reliable, with high levels of sensitivity and specificity, and provide more cost - effective results (45). Since these criteria are not met in DDH cases, based on the current study data and those of other related studies, it is more suitable to use surveillance instead of screening (46, 47). During the screening of congenital hip dislocation, the issues of cost, parental anxiety, and execution of commands for repetitive control should be considered (48). Therefore, there is still no consensus for general screening using ultrasound for all infants (24). Considering all above points, it can be concluded that after clinical examination to diagnose DDH, the sonographic screening should be conducted in infants clinically suspected to developmental dislocation of the hip or the related risk factors (24, 44-48).

Copyright © 2018, Journal of Comprehensive Pediatrics. This is an open-access article distributed under the terms of the Creative Commons Attribution-NonCommercial 4.0 International License (http://creativecommons.org/licenses/by-nc/4.0/) which permits copy and redistribute the material just in noncommercial usages, provided the original work is properly cited
download pdf 165.18 KB Get Permission (article level) Import into EndNote Import into BibTex
Number of Comments: 0