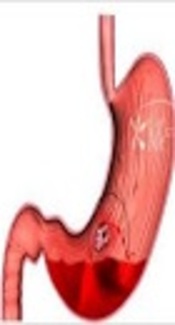 Upper gastrointestinal bleeding (UGIB) is recognized as a life-threatening emergency condition among children and parents, which requires prompt assessment. The purpose of this study was to determine the role of upper endoscopy in determining the cause of UGIB in a pediatric population.

In this retrospective study performed at Ali-Ibn-Abi-Taleb hospital, records of all children with UGIB (below 14 years) were evaluated. Subjects with incomplete information were excluded from the study.

Esophageal varices and peptic ulcer disease were the most common causes of UGIB in our center. Considering the valuable role of endoscopy in the diagnosis and treatment of UGIB, early referral to a hospital with pediatric endoscopy is recommended.

Upper gastrointestinal bleeding (UGIB) is generally defined as bleeding from a site proximal to the ligament of Treitz at the level of duodenojejunal flexure. UGIB is an unusual, but potentially serious problem in children, which presents with hematemesis (vomiting of blood or coffee ground-like material) and/or melena (black, tarry stools). Although life-threatening UGIB occurs in only 0.4% of children, it may provoke anxiety in children and their parents (1). Therefore, early diagnosis and treatment of UGIB are necessary among children.

UGI endoscopy is the gold standard for the diagnosis and treatment of UGIB. It is the procedure of choice for all patients with UGIB. It can diagnose the etiology of the disease in 85% - 90% of cases and is indicated to determine the site of bleeding, specific cause of bleeding, and therapeutic interventions when necessary (2). Endoscopy may be delayed in hemodynamically unstable children with UGIB, resulting in the reduced success of diagnostic procedures (1).

The etiology of UGIB varies throughout the world, which may be related to age, predisposing conditions, study design, and geographical differences in different countries (3-5). In Western countries, the most common causes of UGIB are gastric and duodenal ulcers, esophagitis, gastritis, and varices, whereas in India, variceal bleeding is reported to be the most important cause of UGIB (6, 7).

Endoscopy services were provided for pediatric patients in our center about 10 years ago. In this study, we report our experiences in the application of fiberoptic UGI endoscopy in the diagnosis and treatment of patients, as there is a paucity of data on UGIB in the pediatric population from Iran. The purpose of this study was to determine the role of upper endoscopy in determining the cause of UGIB in a pediatric population at a referral center.

The medical records of patients, who presented with UGIB and underwent endoscopy (2006 - 2014) at Ali-Ibn-Abi-Taleb hospital, Zahedan were retrospectively reviewed. Ali-Ibn-Abi-Taleb hospital is a university teaching hospital and the only center providing pediatric endoscopy services to the public. UGIB was defined as coffee-ground emesis, hematemesis, or melena. The information of all eligible children (< 14 years) was reviewed to identify all diagnostic and therapeutic procedures to control bleeding.

Data collected from the medical records of subjects included age, gender, type of UGIB, duration of UGIB, history of drug use, history of coagulation disorders, hemoglobin level, need for transfusion, and endoscopic findings. A written consent was obtained from the parents. Subjects with incomplete information were excluded from the study. The study protocol was approved by the ethics committee of Ali-Ibn-Abi-Taleb hospital and the research center for children and adolescence health.

Table 1. Presentations of UGIB in 101 Children

The most common source of bleeding was esophageal varices in 32 (31.7%) children, followed by peptic ulcer disease in 17 (16.8%) cases, gastritis in 11 (10.9%) cases, and reflux esophagitis and hiatal hernia in 10 (9.9%) cases. Varices were the most common finding in both age groups. The less common diagnoses included Mallory-Weiss syndrome, prolapse gastropathy, duodenal erosions, and duodenitis. However, no cause of UGIB was found in 10 (9.9%) subjects. The results are presented in Table 2.

Table 2. Frequency of the Causes of UGIB in 101 Children

For evaluating the etiology of the disease, we divided patients into 2 age groups: 1 - 7 years and 7 - 14 years. The most common etiologies in the former group were peptic ulcer, esophageal varices, esophageal erosions, hiatal hernia, and gastritis, while in the latter group, the most common causes were varices, gastritis, peptic ulcer, and hiatal hernia.

Based on the findings, 34.7%, 15.8%, and 34.7% of subjects required packed cell, platelet, and fresh frozen plasma (FFP) transfusions, respectively. In addition, 30% of subjects needed octreotide infusions due to esophageal varices. In 31.7% of children with esophageal varices, 18% underwent sclerotherapy to control bleeding due to varices, while the remaining cases received band ligation.

None of the patients required surgical interventions. Overall, 25.7% of subjects had a recurrent history of UGIB. In addition, 11.9% of children complained of abdominal pain, 54% complained of vomiting, 18% had fever, and 1% had dysphasia (due to a history of acid ingestion). Use of aspirin (1%), ibuprofen (3%), acid (11.9%), and alkaline (1%) was also reported in the subjects. The range of hemoglobin level was 2.5 - 13.5 g/dL. Nasogastric tube was inserted in 73% of cases, while the rest of the patients had no nasogastric tubes due to caustic ingestion or lack of consent.

UGIB is one of the main concerns and life-threatening events in pediatrics. The high incidence of esophageal varices (31.7%) in our population was similar to reports from some developing countries, such as India, which reported variceal bleeding to be the most important cause of UGIB (40% - 95%) (7). This is contrary to the findings of most Western studies, which identified peptic ulcer disease as the most common cause of UGIB (6, 8). This finding may be related to the underlying geographical conditions resulting in UGIB.

In developing countries, variceal bleeding due to extrahepatic portal vein obstruction is the most common cause of UGIB, which is related to neonatal problems, such as omphalitis and exchange transfusion. However, some studies from Iran have reported variceal bleeding as a less common underlying factor (9). On the other hand, peptic ulcer disease was identified as one of the common causes of UGIB in our study. This finding could be explained by the high prevalence of Helicobacter pylori infection in our population, which may occur at high rates from childhood (10). In our experience, endoscopy for the diagnosis of UGIB had a high diagnostic yield (90%). This finding is in accordance with previous results (9-11) and highlights the importance of pediatric endoscopy as a useful method for the diagnosis, reassessment, and treatment of UGI conditions in infants and children.

In addition, the results of our study showed that recurrent abdominal pain and vomiting in children, who cannot be diagnosed via other modalities, may be identified via endoscopy. All children with GI symptoms and bleeding were treated successfully with medications for H. pylori, which seems to be a major progress in the management of these patients. In addition, reassessment with endoscopy for children under treatment for variceal control is necessary due to recurrence. Moreover, 18% of patients required sclerotherapy for the management of hemorrhage (repetition of the procedure is necessary in the future). Endoscopy was of great importance in monitoring injuries and possible complications such as caustic ingestion.

History of ingestion included aspirin (1%), ibuprofen (3%), acid (11.9%), and alkaline (1%). Overall, special attention should be paid to corrosive ingestions by children in developing countries. Children in this age range are highly vulnerable to unintentional poisoning. Frequent history of caustic ingestion in our study underlines the importance of this issue in pediatrics. Therefore, instruction of parents and storage of dangerous substances in proper containers are highly recommended.

In 101 subjects who underwent UGI endoscopy, the clinical presentations included hematemesis (76%), melena (5.9%) and both (17.8%; higher in boys than girls). In this regard, Dehghani SM et al. and Cleveland K have reported similar results (4, 11). Considering the high percentage of hematemesis in our study, early referral of patients with hematemesis and melena is highly recommended.

The present study had some limitations. Despite the advent of endoscopy, access of patients to medical care services provided by trained staff is still limited in Iran. Ali-Ibn-Abi-Taleb hospital is the only teaching hospital for pediatric endoscopy in the province. Therefore, many patients may be admitted with delay in the course of bleeding or may never reach the hospital. The study population included patients referred from different parts of the province for endoscopy. Also, considering the small sample size of the study, more reports from other parts of Iran are necessary to determine the etiology of UGIB in Iranian pediatric populations.

In conclusion, esophageal varices and peptic ulcer disease were the most common causes of UGIB in our center. Endoscopy could identify the bleeding sites in most patients. Therefore, early endoscopy for diagnosis and treatment is recommended and may be valuable in the prognosis of these patients.

The authors would like to express their gratitude to the staff of Ali-Ibn-Abi-Taleb hospital for their valuable cooperation.

Copyright © 2017, Journal of Comprehensive Pediatrics. This is an open-access article distributed under the terms of the Creative Commons Attribution-NonCommercial 4.0 International License (http://creativecommons.org/licenses/by-nc/4.0/) which permits copy and redistribute the material just in noncommercial usages, provided the original work is properly cited
COMMENTS