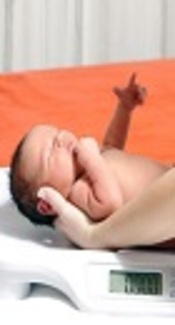 Neonatal weight loss in the first few days of life is a common phenomenon yet limited information about weight loss after birth is available.

The present study aimed at determining associated factors with neonatal weight loss after birth in newborns.

In this cross-sectional study, the sample included 982 healthy, term and singleton newborns that had referred to health centers of Ilam. The mother and neonate’s demographic characteristics, and the mother’s pregnancy, childbirth and postpartum data were collected by a questionnaire. The data was analyzed using univariate and multivariate statistical analysis using the SPSS software.

Neonatal weight loss (NWL) in the first few days of life is a common phenomenon (1, 2), in which infants lose weight after birth before starting to gain weight (3). The rate of NWL has been reported as 4% to 7% (4, 5). A systematic review study reported that the mean rate of NWL was 3.79% to 8.6% (1). Losing weight by more than 5% to 7% is considered as a warning sign of excessive weight loss (EWL) (6-9). International association of breastfeeding (10) and American academy of breastfeeding (11) recommend that if infants lose weight more than 7%, they should be examined and receive a medical intervention. Weight loss rate among infants with hypernatremia has been reported from 8% to 30% (12). Hypernatremic dehydration is a potentially destructive condition, which occurs in infants, who lose weight excessively (13, 14) and can cause serious medical complications and even death. Thus, identification of factors associated with EWL could be helpful in the prevention and treatment of complications (15). These factors, include increased length of hospital stay, female gender, high or low birth weight, the use of epidural analgesia (2), jaundice (16), providing no training to mothers in hospitals, pathological congestion of the breast, increased interval between childbirth and the first breastfeeding, and the use of an additional heater (14).

According to the world health organization, the biggest gap in infant care is mostly observed during the first week of life (when most deaths occur). In addition, behaviors, such as breastfeeding and overcoming its difficulties (one of the factors associated with EWL) begin on the first days of life (17). Therefore, by knowing the factors associated with NWL after birth and recognizing that prevention is better than cure, health care workers, especially midwives and nurses, could play an important role in prenatal care. In a review study, it was also suggested that conduction of observational studies on NWL is more necessary than clinical trials (1).

The present study aimed at determining the associated factors with neonatal weight loss after birth in newborns. It is expected that the results of this study will be beneficial for health promotion among infants.

Ilam is one of the provinces of Iran with a population of 557 599. The neonatal birth rate in this province is 10000 live births per year, on average (18). The present research was a cross-sectional, descriptive-analytic study. Information on 982 neonates born during year 2014 in Ilam province was extracted from their medical records. Samples were selected based on the cluster sampling method, in which Ilam was divided to 4 areas, and 7 health centers were randomly selected from each area. Then, medical records of infants, who met the inclusion criteria in each of these centers, were reviewed based on complete enumeration. The inclusion criteria were having a term singleton infant resulting from natural childbirth or cesarean without any complications. Infants with congenital anomalies or under intensive care after birth and those, who did not visit health centers for receiving healthcare services within 3 to 5 days after birth (the first postpartum maternal and neonatal care, according to the national guideline of Iran’s ministry of health and medical education) were excluded from the study. Demographic information of mothers and infants during pregnancy and childbirth and after childbirth were also collected. Using Cochran’s formula and the known population (the birth rate of 1000 per year in 2013), at an error level of 5% from d = 0.05, Z2 = 3.8416, and maximum p and q values of 0.5, the sample size was determined to be 1000 infants. In this study, medical records of 1640 infants were reviewed, 539 and 119 of which were excluded from the study because of not visiting health centers at first for care and a gestational age under 37 weeks, respectively. As a result, statistical analysis was conducted on the data obtained from 982 medical records.

Information of mothers and infants, including the number of pregnancies, history of breastfeeding, gestational age, mode of delivery, weight and gender of the infant, duration of infant’s hospital stay after birth, type of breastfeeding, and infant jaundice, were recorded in a questionnaire developed based on previous studies. Mother breast feeding experience was evaluated through telephone interviews by the research assistant.

Since some researchers stated that weight loss of equal to or more than 5% was a warning sign and some others believed that weight loss more than 7% of the mean EWL, multivariate analysis (logistic regression) was performed twice; once for factors associated with WL ≥ 5% and once again for factors associated with EWL ≥ 7%. The quantitative and qualitative data were analyzed using descriptive statistics and analytical tests (chi-square, Pearson correlation coefficient, and logistic regression) with the SPSS 17 software.

Comparison of variables between infants, who had lost more than 5% of their birth weight and other infants indicated that the rates of breastfeeding (90.35% versus 52.98%), jaundice (32.77% versus 29.08%), nulliparity (37.86% versus 22.49%), and cesarean section (67.21% versus 18.96%) were higher in the first group. The mean WL in infants, who were exclusively breastfed (4.89 ± 2.86%) was higher than those fed with infant formula (2.78 ± 1.65%). The results of multivariate analysis (logistic regression) showed that breastfeeding, cesarean section, female gender, mother’s lack of experience in breast feeding, weight of more than 4000 grams, and jaundice were among the risk factors for NWL of more than 5%, while risk factors for NWL of more than 7% included only breastfeeding, cesarean section, and female gender (Tables 2 and 3).

The results of the present study indicated that the mean NWL of infants 3 to 5 days after birth was 129 ± 92 grams, and they had lost 4.04 ± 3.19% of their birth weight. This is relatively consistent with the findings of Merry and Montgomery, who reported that infants had lost 4% to 9.8% of their weight, on average (19). In a study conducted by Marchini et al., infants had lost 3% to 6% of their birth weight during the first 4 days after birth (4). According to a study by Martinez et al., the mean WL within 3 to 5 days after birth was reported as 5.09 ± 2.89 (2). The findings of the present study are consistent with the results of most previous studies in which the mean NWL was reported as 3% to 7% (8-10).

According to the results of the present study, breastfeeding increases WL ≥ 5% and WL ≥ 7% by 7 and 3 times, respectively, and this variable was the strongest predictor of NWL, as the mean WL in infants, who were exclusively breastfed (4.89 ± 2.86%), was higher than those fed with infant formula (2.78 ± 1.65%). McDonald also reported the same results in this regard (6.6% versus 3.5%) (13). The results of the present study are consistent with the findings of most previous studies (13, 15, 20); however, Davanzo et al. reported that the mean WL in infants, who were breastfed was lower than those fed with infant formula (6.3% versus 7.5%) (16). This is inconsistent with the results of the present study and the concept that is widely accepted by the experience and knowledge of health care staff. This inconsistency could be due to different breastfeeding practices and protocols. According to the guidelines of the American academy of pediatrics (AAP), a WL of more than 7% within 3 to 5 days after birth is an indicator of possible breastfeeding problems (21). Despite the proven benefits of breastfeeding, dehydration and poor weight gain after birth are common among infants, who are breastfed. These conditions are often preventable and if diagnosed early, they will not have long-term effects on infants (14, 22, 23).

Since WL in infants, who are breastfed depends on the volume of milk they receive (1, 24), breastfeeding protocols and practices must be taken seriously by infant-friendly hospitals, and these hospitals should train mothers, and establish other policies of successful breastfeeding. If these measures are taken before childbirth, they could reduce NWL in infants. Another reason for NWL in infants fed with formula in the present study was the late start of feeding with formula after a period of deprivation of breast milk (16).

In the present study, cesarean section was another factor associated with NWL. This is consistent with the findings of Kagler (14) and Davanzo (16), who reported a direct relationship between cesarean section and weight loss after birth. It has been proven that, regardless of the type of infant feeding, NWL depends on the type of delivery. Researchers believe that feeding less than optimal levels after C-section may lead to greater levels of NWL. In fact, despite the promotion of “natural” CS and special training programs about breastfeeding, CS oppositely affects the initiation and duration of breastfeeding, especially after emergency cesarean section, and lower values of breastfeeding may be due to a lack of mother’s recovery after surgery (25).

According to the results of this study, gender is one of the risk factors for NWL. In a study conducted by Jane (2010), female gender was one of the predictors of NWL in the first 24 hours after birth (26). However, female gender in the present study was associated with the type of breastfeeding, as the female to male ration in infants, who were breastfed, was 118 to 100, while this ratio in infants fed with formula was 52 to 100. Therefore, WL in female infants is influenced by their breastfeeding type. As a result, health care providers should be sensitive to WL in female infants, who are breastfed, especially if they are born through cesarean section.

In this study, infants weighing more than 4000 grams lost more weight than others. In a study by Wright et al., weight was a strong predictor of WL. In their opinion, large-for-gestational age and breastfed infants lose more weight (5). These differences are probably due to variables such as mother and infant’s characteristics, breastfeeding management, nutritional protocols in hospitals, and attitudes and skills of health care workers (16). It has been widely accepted that breastfeeding is the best way of feeding infants, and pediatricians greatly emphasize the expansion of breast milk use. Health professionals, who are involved with these issues, have reached a consensus on the success of breastfeeding. In addition, it is very important to identify potential problems and barriers to successful breastfeeding, and denial of such problems leads to growth impairment. Since providing support and advice to nursing mothers may be insufficient, regular and indirect monitoring of weight will be helpful in evaluating feeding as either adequate, requiring infant formula supplement, or expressed breast milk. American Academy of Pediatrics (2012) recommended the policy of “Breastfeeding and the Use of Human Milk” for infants, who are breastfed and lose more than 7% of their weight (27). Prevention or at least early diagnosis of hypernatremia, as one of the most serious complications of EWL, should be a top priority for any health care system (28).

The results of the present study are corroborated by the findings of previous studies and add breastfeeding experience to other risk factors of NWL.

In the present study, infants, who had been hospitalized for more than 3 days and probably lost more weight, were not included in the study because of not visiting the health centers on the third to fifth day of birth, thus the mean values of NWL obtained in the present study may be underestimated. To fix this limitation, we considered intensive care after birth as one of the exclusion criteria.

The research team wishes to thank Ilam University of Medical Sciences and health services for their financial support (grant no. 993011/74) and also newborns’ mothers, who contributed to this study.