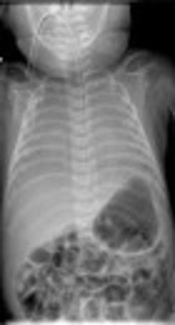 Management of Tracheal Agenesis with Esophageal Intubation Can Save Lives: A Reminder for Anaesthesiologist and Neonatologist

how to cite: Caliskan E. Management of Tracheal Agenesis with Esophageal Intubation Can Save Lives: A Reminder for Anaesthesiologist and Neonatologist. J Compr Ped. 2018;9(3):e60388. doi: 10.5812/compreped.60388.

Tracheal agenesis (TA) is a rare congenital anomaly presenting at birth with respiratory distress and difficult airway management. Polyhydramnios and premature labor are often pathologies associated with these pregnancies, which makes patient management more difficult. TA is often associated with other organ system anomalies (such as cardiovascular, renal and limb anomalies). Hereby, we report a case of tracheal agenesis who is presenting to our pediatric surgery and anesthesiology clinics.

An 30 weeks’ premature infant was transferred to our neonatal intensive care unit, with the diagnosis of tracheal agenesis. He had failed attempts at intubations because of failing to visualize the vocal cords. It was learned that immediately, his respiratory tract was secured via cervical oesophagostomy using long tracheostomy cannula and the infant was subsequently stabilized by gently ventilated. The diagnosis was confirmed on CT scan. It was performed distal oesophageal banding at the upper gastroesophageal junction with gastrostomy. On postoperative day 12 in intensive care unit, the baby further got complicated with a developing cyanosis and circulatory insufficiency. Cardiorespiratory arrest was developed and the infant died after 40 minutes after resuscitation.

Successful approach at tracheal agenesis depends on, either prenatal diagnosis or recognition of this situation immediately after birth. In recent years, long time survival has been reported in tracheal agenesis through various surgical approaches. Therefore, it should be remembered that early esophageal ventilation is a life-saving alternative.

Tracheal agenesis (TA) is an uncommon congenital malformation with a lethal course and incidence has been reported 1:50.000 with a male to female ratio of 2:1 (1). Generally, more than half of the cases are associated with polyhydramnios and premature delivery. Antenatal diagnosis of this pathology is often difficult. Cyanosis, severe respiratory distress, absence of audible crying, and difficult or impossible endotracheal intubation are characteristics of this pathology (1). Herewith, it should be kept in mind that these newborn babies may be emerged as a medical emergency in the delivery room.

More than 90% of cases were accompanied by further congenital malformations. The presence of trachea or bronchoesophageal fistula is a factor that provides adequate oxygenation and possibility of life in the early period, however, most neonates with tracheal agenesis die within hours or early days of birth owing to difficulties in diagnosis and treatment (2).

In most patients, even those that are successfully rescued and stabilized, there is a high risk where one could not be weaned off mechanical ventilation and/or suffered from neurological impairment.

Hereby, we present a case of tracheal agenesis who had unexpected ventilation difficulty and impossible intubation.

An infant boy with a birth weight of 1600g was born by caesarean section at 30 weeks and transferred to the Neonatal Intensive Care Unit in our hospital the day he was born.

It was also learned that the mother was presented in emergency with preterm labor, antenatal polyhydramnios was noted. Medical records of the referring hospital revealed that he was initially resuscitated with bag-mask ventilation immediately after birth due to signs of respiratory distress and cyanosis with an Apgar score of 4 and 5 at 1 min and 5 minutes, respectively. Due to bag-mask ventilation failure, endotracheal intubation was attempted to secure the airway. However, this attempt was unsuccessful, due to the fact that the vocal cords could not be visualized and there was a single opening thought to be an oesophagus. When the tracheotomy was examined, the absence of the trachea was seen. Immediately, a respiratory tract was secured via cervical oesophagostomy using long tracheotomy cannula and the newborn was transferred to the pediatric intensive care unit (PICU) in our hospital.

He was spontaneously breathing on admission. Bronchoscopy revealed an epiglottis, however no glottis. In addition, the distal segment in the side of the trachea ended blindly.

Proximal and distal fistulas were detected extending from the oesophagus to the trachea. In the endoscopic and tomography, the examinations revealed Floyd’s type I tracheal agenesis (3), in which a tracheotomy was impossible. In addition, he was complicated with congenital hypothyroidism, patent ductus arteriosus, and pulmonary hypertension.

It was decided to perform a laparotomy. In the operating room, 5-channel EKG, pulse oximeter, end-tidal carbon dioxide, and invasive blood pressure measurement were continuously monitored. General anaesthesia was induced and maintained with Sevoflurane in oxygen-air mixture supplemented with continuous infusion of fentanyl. Then, distal oesophageal banding at the upper gastroesophageal junction with gastrostomy was performed. The patient was transferred to the PICU. In the PICU, the patient’s respiratory problems continued, however, his respiratory condition progressively improved. Nonetheless, after the fifth postoperative day, recurrent cyanotic attacks, circulatory failure, air trapping around the tracheoesophageal fistula (TOF), and pulmonary atelectasis appeared. On postoperative day 12, the patient had a cyanotic attack, bradycardia, circulatory insufficiency, and cardiorespiratory arrest. After 40 minutes, resuscitation was stopped and the infant died.

TA is a rare congenital lethal anomaly and has been reported for the first time by Payne (4). Antenatal diagnosis is difficult and severe respiratory distress with no air entry, no audible cry, and difficult intubation are diagnostic findings in the postnatal period. Additionally, in the presence of polyhydramnios anamnesis and other anomalies associated with TOF, possible tracheal pathologies should be considered. This malformation of the trachea is generally incompatible with life due to the fact that tracheostomies cannot be performed to provide ventilation. In the literature, insertion of a tracheostomy tube through a proximal oesophagostomy into the oesophagobronchial communication has been described (5, 6).

In infants where TA was associated with oesophageal communication with the trachea or main bronchi, oesophageal intubation can be lifesaving (8). However, most of these infants die during the first hours or days of their life, due to other congenital malformation, difficulties in diagnosis, and failure to manage airway. In addition, prematurity and respiratory distress syndrome can be the cause of mortality and morbidity by itself.

Various surgical approaches have been attempted, although a definitive treatment strategy has not been established. However, in recent years, a few case reports with TA that were treated with oesophageal reconstruction and did not require mechanical ventilation have been reported (1, 9-11). These cases in the literature, reveal that good long-term improvement is possible after successful airway/alimentary tract reconstruction.

As we learn more about the embryological development of the trachea, new surgical reconstruction techniques will develop in the future for survival of these babies.

In early diagnosis and proper airway stabilization by esophageal intubation, short-term respiratory support may be allowed; this approach can prevent acute anoxia and hypoxia in newborns.

Therefore, we consider that early clinical diagnosis and oesophageal intubation technique should be remembered by the anesthesiologists for the possibility of advanced life in patients with tracheal agenesis.

Copyright © 2018, Journal of Comprehensive Pediatrics. This is an open-access article distributed under the terms of the Creative Commons Attribution-NonCommercial 4.0 International License (http://creativecommons.org/licenses/by-nc/4.0/) which permits copy and redistribute the material just in noncommercial usages, provided the original work is properly cited
download pdf 78.43 KB Abstract XML Get Permission (article level) Import into EndNote Import into BibTex
Number of Comments: 0