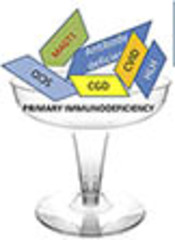 Primary immunodeficiency disorders are a diverse group of rare genetic diseases that are often under-recognized. Therefore, significant morbidities and mortalities ensue due to diagnosis delay. This is an evaluation of clinical presentations and laboratory data of children referred to Mofid University Hospital during a 10-year period. The aim of this study is to provide epidemiologic data for early diagnosis and proper management of these patients.

A total of 80 children referred to Mofid’s Children Hospital suspected to primary immunodeficiencies (PIDs) were evaluated clinically. The demographic, clinical, and laboratory data were collected in detail and were analyzed as a cross-sectional study. Missing data were completed in follow-up visits.

The prevalence of antibody deficiencies, phagocytic defects, and combined immunodeficiencies in 80 children with primary immunodeficiency syndromes were respectively 36.25%, 32.5%, and 31.25%. Common variable immunodeficiency (13.75%) and severe combined immunodeficiency (12.5%) had the highest prevalence among these disorders and the lowest prevalence were reported for cyclic neutropenia (5%), ataxia-telangiectasia (5%), and transient hypogammaglobulinemia of infancy (3.75%). The most common mode of inheritance detected was an autosomal recessive pattern. Pneumonia, otitis media, and diarrhea were the most common complications in the course of these disorders, which were seen respectively in 30%, 18.8%, and 15% of the patients.

Issues regarding clinical presentation and management of primary immunodeficiencies continue to puzzle the clinical practitioner. Epidemiological data are needed to increase the awareness of the physicians regarding primary immunodeficiency disorders and to support the benefits of early diagnosis and treatment. Diagnosis delay is associated with increased morbidities and even mortalities.

Primary immunodeficiencies (PIDs) are a rapidly developing part of modern medicine (1). Today, more than 200 primary immunodeficiencies have been described and characterized (2, 3). Due to the heterogeneity of the PIDs, the variability of their clinical manifestations, and involvement of different organs, a multidisciplinary approach is required. The early diagnosis and initiation of appropriate therapeutic strategies will significantly influence the prognosis. PIDs are usually rare diseases with overall prevalence of 1:10000 live births (4). PID encompasses a wide spectrum of manifestations ranging from selective IgA deficiency with a considerably benign prognosis to severe combined immunodeficiency (SCID) with a potentially catastrophic outcome. Increased susceptibility to infections is the hallmark of these disorders. Furthermore, dysregulation of the immune system may predispose these patients to malignancy and autoimmune disorders (5).

For proper management of these rare conditions, epidemiological data are of paramount importance in making health-care planning decisions. However, due to rarity of these disorders, and the existing differences in incidence of PIDs in certain geographic regions of the world, epidemiologic data on PID are difficult to obtain. Therefore, PIDs are often under-diagnosed and under-reported. In addition, data on mortality and morbidity are limited. This study aims to provide data on different aspects of PIDs in the children age group presented to Mofid University Hospital, Shahid Beheshti University of Medical Sciences from 2003 to 2013.

This study included all the patients referred to infectious and immunology clinics of Mofid University Hospital during a 10-year period from 2003 to 2013 with clinical presentations indicative of immune deficiency syndromes. The patients were carefully evaluated with a detailed history, physical examination, and immunological screening tests. CBCs were performed by automated blood counting machine, the Sysmex XE-2100. ESRs were measured by Western Green Method. Hemagglutinins were quantified by CA 1600 and immunoglobulin levels were evaluated by ELISA. Reviewing of CD markers was performed by flow cytometry and the level of serum complement components were determined by ELISA. Then, the patients were categorized based on the primary presentations, clinical manifestations of the disorders, and also the laboratory data. The complete blood count of the patients were interpreted according to the reference tables in Nelson Textbook of Pediatrics (6).

Patients with HIV infection, receiving immunosuppressive therapies, and organ transplantations were excluded from the study. A total of 80 patients were enrolled, however, 8 were lost to follow-up. Once phenotypic data was collected from the patients, a genetic pedigree analysis was performed, which allowed us to determine whether the trait was recessive or dominant and to evaluate the risk of repeated occurrence of the disease in the family with performing consultations for future pregnancies. Regular follow-up visits in the clinics was recommended to all the patients.

Before enrollment, a written formal consent was obtained from the patients’ parents or their care-givers. This study was approved by the Ethics Committee of the Mofid Hospital, Shahid Beheshti University of Medical Sciences.

Data were analyzed by statistical software SPSS-19. The level of significance was considered P < 0.05. The Kolmogorov-Smirnov test was used to compare the samples with a reference probability distribution. In the cases with normal parameters, Pearson’s Chi-square test was used. Otherwise, Spearman’s rank correlation coefficient was used as a nonparametric measure of statistical dependence between the variables.

In this study, 80 patients were evaluated of whom, 49 (61.2%) were male and 31 (38.8%) were female. The patients’ mean age at onset of presentation was approximately 12 months and their mean age at diagnosis was 23 months. Therefore, the median interval between the onset of symptoms and the diagnosis of a PID in this study was 11 months. The mean age at the onset of symptoms and the mean age at diagnosis according to specific defects are demonstrated in Table 1. As shown in Table 1, the youngest patients with primary immunodeficiencies were those presenting with leukocyte adhesion defect. The mean age at onset of the clinical manifestations for leukocyte adhesion defects in this study was 2.22 months, followed by transient hypogammaglobulinemia of infancy, which was 4.22 months.

Table 1. The Age at Onset of Presentation Versus the Age of Diagnosis in Patients Presenting with Primary Immunodeficiencies 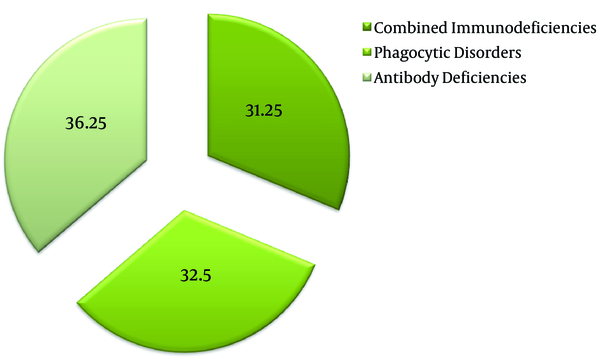 The distribution of the immunodeficiency major categories in patients

Table 2. The Number of Patients Presenting with Specific Primary Immunodeficiencies

We also evaluated the gastrointestinal system in these patients. The most common findings were diarrhea (15%), gastroesophageal reflux (11.25%), and hepatosplenomegaly (11.25%). However, we also detected abdominal pain (22.5%), nausea (8.75%), and vomiting (13.75%) as nonspecific symptoms in these patients.

Parental consanguinity was the next variable evaluated in these patients. A total of 59.25% of parents were first cousins and 3.7% were double first cousins. A total of 11.14% of the parents had a nonconsanguineous marriage. We reviewed the pedigree of these patients, and found out that the disorder had been repeated in 11% of cases previously in the family pedigree, however, the majority (89%) of the pedigrees did not demonstrate any similar cases in other descendants. The mode of inheritance of the immunodeficiency disorders were mostly autosomal recessive (88.88%), followed by autosomal dominant, and X-linked recessive (each 3.7%). A total of 3.27% of the cases were sporadic

More than 200 immunodeficiencies have been detected so far and new PIDs are being discovered at an increasing rate. PIDs are rare, however, they comprise diverse genetic defects with adverse influences on the development and function of immunity (7). They result in a wide range of clinical symptoms, including susceptibility to infections, auto-inflammation, allergy, and malignancy. The early diagnosis is usually associated with better prognosis and sooner establishment of appropriate therapeutic strategies. Besides, proper management may prevent or slow down the development and course of the complications of PIDs, particularly the respiratory consequences. Diagnosis is based on immunologic tests and molecular genetic analysis. In some countries, newborn screening programs are running with the aim of early initiation of appropriate treatment and to prevent the possible complications of these diseases (8).

As mentioned, in previous sections, male predominance was evident in this study. In other studies, the overall incidence of immunodeficiency diseases was reported 1.4 to 2.3 times more common in males than in females (9). This figure in our study was approximately 1.5. This male predominance is true even if X-linked diseases are excluded. The reason is unknown, however, it may indicate additional genetic susceptibility factors. Boys were also affected by autosomal disorders due to the high rate of parental consanguinity, which was significantly high in these patients (89%).

The age at onset of symptoms, age at diagnosis, and the diagnosis lag showed considerable variations among different primary immunodeficiencies in the patients evaluated. However, the median interval between the onset of symptoms and the diagnosis of PID in this study (11 months) seems to be an acceptable period of time. Nearly, the same results were obtained in another population-based cohort study (10). The patients’ mean age at the onset of symptoms in this study was approximately similar to other studies performed earlier.

We also evaluated the associated morbidities in these patients to detect the most frequent signs and symptoms. Recurrent pneumonia (28.8%) was the most common initial manifestation, followed by recurrent ear infections (18%) and recurrent or chronic sinusitis (14%). Al-Herz et al. also showed that pneumonia was the most common infectious complication (60%), however, in other studies the rate of pneumonia varied between 23% to 42% (12). In another study designed by Jung Woo Rhim et al. the most frequent findings in patients with primary immunodeficiencies were pneumonia, otitis, and adenitis (12, 13). Adenitis was also a frequent finding in our study, however, lymph node involvement in our patients particularly suggested phagocytic disorders such as chronic granulomatous disease. Fever was the most frequent constitutional symptom of the patients in this study. Cytopenia was another finding detected in detailed evaluation of our patients. A variety of causes for cytopenia have been proposed in PIDs. In some types of immunodeficiencies, it is a primary feature of the immunodeficiency, and in others, it is a secondary phenomenon. The following pathophysiological mechanisms have been suggested as the cause of cytopenia in immunodeficiency syndromes: (1) classic autoimmune cytopenia, (2) cytopenia in the context of immune dysregulation, (3) bone marrow failure, (4) toxic or infectious myelosuppression secondary or concomitant to PID (14).

WBC counts were mostly normal in nearly all of the patients in our study. Thrombocytopenia was found in 30.43% of patients with humoral immunodeficiencies. The most common reason found, according to the above-mentioned etiologies, was due to antibody-mediated autoimmunity particularly in patients with CVID. Autoimmunity is not exclusively seen in CVID, however, many other disorders such ac CIDs may show some extent of autoimmunity as a result of autoreactive T cells and reduced T cell regulation, which could explain the cause of cytopenia. However, in Wiscott-Aldrich syndrome, the basis of thrombocytopenia is the underlying cytoskeletal dysfunction (14). Anemia was a more common finding in patients with phagocytic disorders (60.86%) as a complication of toxic or infectious myelosuppression.

The overall results we found in this study are consistent with previously reported studies in other countries. However, we believe this study is subject to some limitations. First, Mofid Teaching Hospital is a tertiary center and this study was conducted on a small number of patients presented at this tertiary hospital. Therefore, the prevalence of different PIDs cannot be generalized to the whole country. Second, patients were presented at our hospital due to the fact that they either had critical acute illnesses or chronic difficult-to-treat complications. Thus, the study was biased towards the severe complicated forms of PIDs.

The diagnosis of PID has been increased during the past decades. As noticed, an overall increase in incidence over time could be due to better diagnostic tools and increased physician awareness of these disorders. Such epidemiological data are needed to raise the awareness of the medical community about PIDs and to support the public health benefits of early diagnosis and treatment.

Copyright © 2018, Journal of Comprehensive Pediatrics. This is an open-access article distributed under the terms of the Creative Commons Attribution-NonCommercial 4.0 International License (http://creativecommons.org/licenses/by-nc/4.0/) which permits copy and redistribute the material just in noncommercial usages, provided the original work is properly cited
download pdf 153.83 KB Abstract XML Get Permission (article level) Import into EndNote Import into BibTex
Number of Comments: 0